#SonamKiShaadi not only gave everyone a chance to witness the reunion of Karan-Arjun with Shah Rukh Khan and Salman Khan singing Yeh Bandhan to Pyaar Ka Bandhan Hai for the bride's mom, Sunita Kapoor, but it also gave a picture-perfect family portrait of Boney Kapoor with his four children, Arjun, Anshula, Janhvi and Khushi.

It’s been more than three months since the legendary actress, Sridevi Kapoor passed away leaving the nation devastated by this huge loss. As it is a known fact that earlier Arjun Kapoor and Anshula Kapoor were initially not in good terms with their father, Boney Kapoor’s second wife, Sridevi and their daughters, Janhvi Kapoor and Khushi Kapoor. However, Sridevi’s sudden and unexpected demise brought the family closer and Arjun and Anshula stood as strong pillars for their family.

Arjun Kapoor has every now and then proved that he is a supportive and possessive brother to his sisters, Anshula, Janhvi and Khushi. The relationship between the siblings of cold vibes is now taken over by warmth and love, and it can be credited to Arjun and Anshula’s good upbringing by their mother, Mona Shourie Kapoor. It is their praiseworthy upbringing which helped them shed away their old grudges and forget and forgive whatever happened in the past. (Also Read: Janhvi And Khushi Kapoor Enjoy Dinner With Half-Siblings Arjun And Anshula Kapoor) 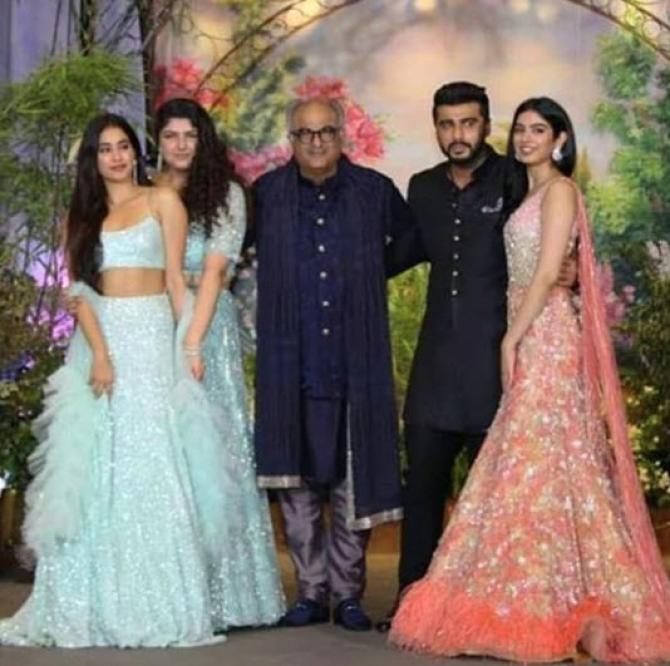 Acknowledging the blogger, Arjun tweeted, "Hey @aakanksha3131, me & @anshulakapoor represent our mother every single second we live...she would expect us to have been standing next to our father no matter what n be there for Janhvi & Khushi... thank you for ur kind words bout our mother...as she would say god bless u..." 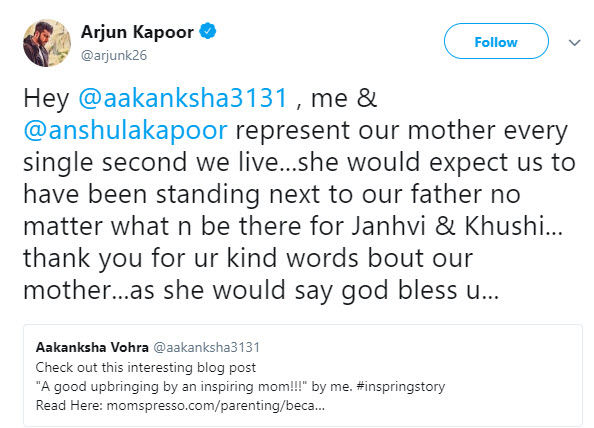 Isn’t this sweet? In an interview with Vogue recently, Dhadak fame Janhvi Kapoor talked about how their family came together after her mom, Sridevi’s demise. Janhvi stated, “It’s made us feel safe and secure. I think, even for Papa, it’s a source of comfort. It’s definitely tied us together. We’ve lost mom and I don’t think that’s a loss any of us will ever get over.” She further went to say that her mother was a constant inspiration for her, “That’s always been my motivation. I’m so proud of my parents. I need to make them as proud of me.” (Also Read: Janhvi Kapoor Reveals Her Mom Sridevi's Reaction After Watching 25 Min Of Her Debut Film, 'Dhadak') 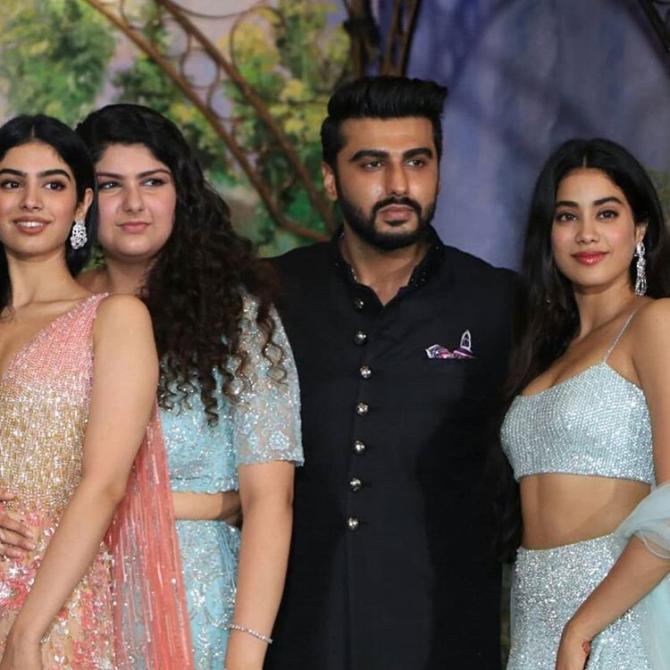 On June 5, 2018, Arjun Kapoor lashed out on media publications for giving the trolls the attention and fulfilling their agenda. Arjun tweeted, “2 trolls write a comment and for the web team of a big newspaper, it’s a news story...  slow clap. Ridiculous how trolls are given attention by the media and they wait for us to retaliate...the lesser the stories the lesser the trolls win...” He also posted the link of HT Entertainment who covered the story. (Also Read: Janhvi Kapoor Trolled For Her Dress, Arjun Kapoor Slams A Media House For Giving Attention To Trolls) Arjun further said that his words are not specifically for one publication but media houses in general. He tweeted, “It’s not about a particular media organisation...it’s about the media in general giving importance to certain elements on social media that don’t deserve it at all...the digital handle editors need to screen thru & not put up certain stories as click bait that’s all honestly...”

Earlier this year, Arjun again slammed a website for objectifying his sister, Janhvi Kapoor and wrote, “U know what f*** u man f*** u as a website for highlighting or bringing it to anyone s attention...and it’s shameful that ur eye would go searching for something like this shame on u...this is how our country looks at young women yet another shining example...ashamed by this...” (Also Read: Arjun Kapoor Slams A Website For Objectifying His Half-Sister Janhvi Kapoor, Says It's Shameful) Even Anshula requested the trolls, not to use abusive language for her sisters, Janhvi and Khushi. Anshula wrote, “Hi, I’m requesting you to refrain from using abusive language especially towards my sisters, I do not appreciate it & have therefore deleted ur comments. While I am grateful for your passion and love for bhai & me, just a small correction - I was never working outside India. Let’s please spread joy & good vibes. Thank you for the love”. (Also Read: Step-Sister Anshula Kapoor Slams A Troll, Asks Not To Abuse Her Sisters Janhvi And Khushi) What Arjun Kapoor and Anshula Kapoor are doing for their family is really inspiring and no doubt, their upbringing by their mother, Mona Shourie Kapoor is to be credited for that!