Janhvi Kapoor's relationship with her family doesn't need any special mention. Recently, Janhvi missed out on the opportunity of visiting her family in New York City and posted some 'missing' pics.

He is our first superhero, our secret protector, our guide, our motivator-  he is none other than our King, our father!  A bond that a father shares with his little angel is beyond words and it will be unfair to try and pen down the same. No matter how angry a father gets with his daughter, he will always pray for her happiness and success. He will protect his daughter from every tough situation and will guide her on every path of life. A daughter can always rely on her father for anything and he will happily support her. (Recommended Read: Alia Bhatt's Sister, Shaheen Bhatt Posts A Grumpy Pic Of Alia, Calls Her A Happy Little Flower)

The Kapoors are one big happy family. From attending a wedding to going out on family vacations and having a gala time, the Kapoor khandaan is always together! They have been by each other’s side through thick and thin. Boney Kapoor and Sridevi Kapoor's daughter, Janhvi Kapoor has already proved to the audiences that she is here in the showbiz world to stay after her debut movie, Dhadak. And, on the other hand, Janhvi’s younger sister, Khushi Kapoor is currently studying in New York Film Academy (NYFA). Both the sisters have proved to be fashionistas and their social media handles are proof. In September 2019, Khushi Kapoor had left for her further studies and had joined New York Film Academy (NYFA). B-towns celebs' lives become very hectic and it gets difficult for them to spare some quality time out for their close ones. Janhvi Kapoor is busy shooting for her upcoming movie, Gunjan Saxena and while fulfilling her work commitments, she missed out on the opportunity to visit her sister, Khushi Kapoor and dad, Boney Kapoor in the New York City. Today, on November 12, 2019, Janhvi took to her Insta stories and posted two ‘missing’ pictures. In one of the pictures, Khushi is seen posing with her father, Boney and in the other, Boney can be seen happily posing for the camera. Here are the pictures for you: On Anaita Shroff Adajania’s chat show, Feet Up with the Stars, Janhvi Kapoor had talked in length about her bond with her sister, Khushi Kapoor. She had said, “We share our clothes, but we have this thing that if you steal without telling, then it’s a thing. At this point, I don’t care. She still likes... She’s very righteous, so she is like, ‘You cannot take something without asking.’ She feels like she needs to inculcate manners in me. So that’s where it’s coming from.” (Suggested Read: Sooraj Pancholi Reacts On Being A Scapegoat In His Late Ex-Girlfriend, Jiah Khan's Suicide Case) Janhvi Kapoor was missing her sister, Khushi Kapoor and for that, she had flown to New York to spend some quality time with her. On September 23, 2019, Janhvi had taken to her official Instagram handle and had shared two cutesy pictures, one with her dear dad and the other, with her darling sister. In the picture with her dad, she could be seen leaning on Boney’s shoulder. The other picture had her and Khushi, happily clicking a selfie. Janhvi had captioned the post as “Finally”, followed by a rainbow emoji. As soon as she had posted these pics, her half-sister, Anshula Kapoor had sent lots of love. 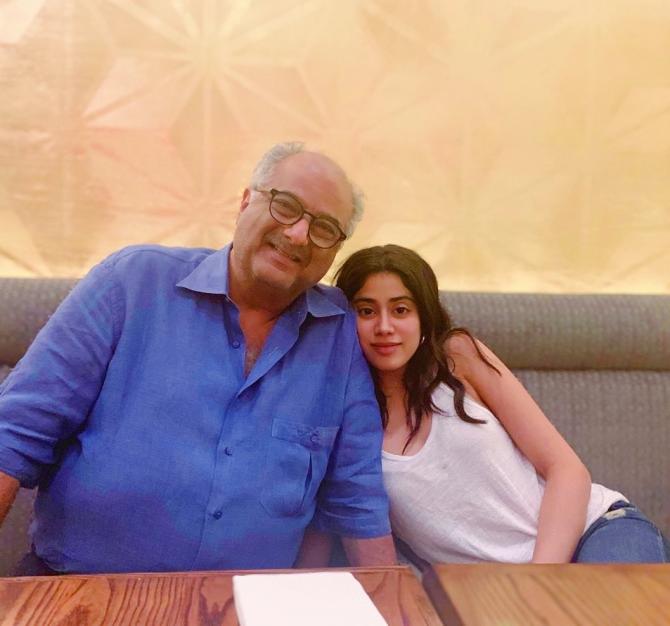 On November 11, 2019, Boney Kapoor had turned 64 and his daughter, Janhvi Kapoor had posted some unseen pictures of her dad with a heartfelt message. Expressing how her ‘best dad’ has now become her ‘best friend’, Janhvi had written, “Happy Birthday Papa. You always ask me where I get my energy from papa and I get it from you. Seeing you wake up and doing what you love with more passion every single day, seeing you fall but get up even stronger, seeing you broken but giving us and everyone else strength when they need it. You’re the best man I’ll ever know. You inspire me, encourage me, you’ve always been the best dad but now you’re my best friend. I love you. I’m going to make you so proud. You deserve all the happiness in the world, and I hope and pray this year is full of just that in abundance for you.”

A major heartbreaking incident has proved us that no matter what, the Kapoor family will always stick together. In a tragic incident, we lost Chandni actress, Sridevi ji and we couldn’t control our tears after seeing her husband, Boney and daughters, Khushi and Janhvi going through the rough phase. During the entire rough patch, the family has stood by each other like a rock-solid pillar. Be it Arjun Kapoor fulfilling his son’s duty and at the same time giving support to his half-sisters to Anshula being strong support for Janhvi and Khushi, both of them have been supporting the family beautifully. They have proved that they are a strong family. The bond that Arjun and Anshula shares with their half-sisters, Khushi and Janhvi is just remarkable! Do you know who gives Janhvi Kapoor a thumbs up for her outfit choices? Well, it’s none other than her father, Boney Kapoor! Revealing the same, Janhvi had once stated in an interview with an online portal that they have a family group wherein it is Boney who approves her dresses. Janhvi was quoted as saying, "We have a WhatsApp group called Dad’s Kids’ which has me, Khushi, Anshula didi, Arjun bhaiya, and dad on it." She had further added, "And I send all my outfit pictures along with looks from different photoshoots on that group. In fact, most of my outfits need to be approved by dad, otherwise, I don’t feel confident wearing them." (Must Read: Lata Mangeshkar's Sister, Usha Mangeshkar Shares The Latest Health Update Of The 90-Year-Old Singer)

Awww, we love Janhvi Kapoor’s bond with her father, Boney Kapoor and sister, Khushi Kapoor. What about you?