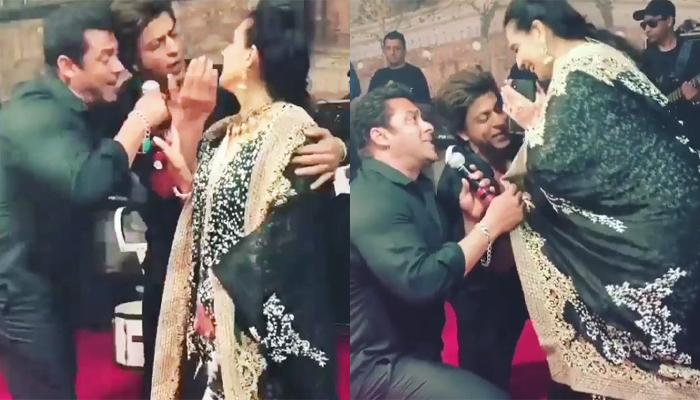 Ask anybody, even a mild Bollywood fan, as to where was the biggest party on Earth organized yesterday. And (s)he would answer you- The Leela, Mumbai. Yes, on the night of May 08, 2018, the Bollywood superstars gathered under one roof for Sonam Kapoor Ahuja and Anand Ahuja’s reception and gave us unmissable rocking moments which we would cherish for quite some time. (Also Read: Famous Actor Shreyas Talpade And Wife Deepti Talpade Became Parents After 14 Yrs Of Marriage)

Reportedly, Sonam and Anand’s reception party went on till 3.30 am, and if our favourite celebrities are now drenched and sleeping after their hangover, we don’t mind. After all, their hangover and madness gave us prized moments which we would enjoy forever. And one such moment arrived late in the night, when two of the biggest stars in this world- Salman Khan and Shah Rukh Khan, came and sang together. (Don't Miss: Ranveer Singh, Varun Dhawan, Arjun Kapoor Thump And Beat 'Dhol' At Sonam's Reception, Video Inside!)

But what they sang, and for whom they sang, is the most important. So, without any further ado, let us tell you how SRK and Dabangg Khan rocked it last night. In one of the videos, which has now gone viral, we can see Shah Rukh and Salman recreating a perfect Karan Arjun moment. Singing the highly revered song from the movie, Ye Bandhan To Pyar Ka Bandhan Hai, the two went down on their knees to woo none other than, bride Sonam’s mother, Sunita Kapoor. In the video, you would see, Sunita screaming, “Control them!”, but no help came her way, and rightly so! After all, how often do we get to see such moments? Sunita Kapoor’s husband, Anil Kapoor himself could be seen enjoying the moment, standing behind the back with Ranveer Singh. Take a look the video:

Looking at these videos, we can definitely say that Sonam and Anand’s reception was so much fun-filled. In the morning of the same day, Sonam Kapoor became Sonam Kapoor Ahuja when Anand put sindoor on Sonam’s forehead and tied mangalsutra around her neck. In a traditional Sikh wedding, they were pronounced husband and wife after the Anand Karaj ceremony.

In her bridal look, Sonam looked like a dream in an ornate red and gold Anuradha Vakil lehenga for her wedding, and she kept her make-up minimal to keep all the attention on her royal headgear.

The wedding had long been anticipated but when the families of now-husband and wifey earlier released a statement confirming the news of the wedding, everyone knew that soon there would be a wedding worth remembering for whole life. The statement that was released read, “The Kapoor and Ahuja families, take great joy and pride, in announcing the marriage of Sonam and Anand. The wedding will take place on the 8th of May in Mumbai. Since it is an intimate affair, we request you to respect the family's need for privacy. Thank you for all your blessings and love, as we celebrate this special moment in our lives”.

We wish Sonam Kapoor Ahuja and Anand Ahuja a very happy married life and we hope that you enjoyed the Salman Khan and Shah Rukh Khan’s moment!