Famous television actor and super-talented handsome hunk, Karanvir Bohra is locked up in the Bigg Boss 12 house for the last few months. With each passing day, the equations in the BB house keep changing, people flip, and the bond changes. Everyone’s playing their own game in the house and are all focused to win the title. One of the targeted contestants this season seems to be Karanvir Bohra.

In the last Weekend Ka War episode of Sunday i.e. November 11, 2018, Karanvir was mocked and ridiculed just like other Weekend Ka Wars. This time it didn’t go well with Karanvir’s doting wifey and actress, Teejay Sidhu. Teejay took to her official Instagram account and wrote a long post asking for the reason of ridiculing her husband Karanvir on every Weekend Ka War. (You May Also Like: Teejay Sidhu Gets Congratulatory Messages For Delivering Karanvir's 3rd Baby, Her Reply Is Epic) The long open letter of Teejay could be read as, “Respected Bigg Boss team, I saw the Sunday Weekend Ka War and wanted to share some thoughts with you. First of all, I don’t know if myself and Karanvir have upset you guys in any way, but if we have, I sincerely apologize. It seems you are upset with KV about something, but we don’t know what. Every Weekend KV is ridiculed and it is hard to see him being demoralized like this. At first, I just thought it was harmless leg-pulling, and even defended the same. But after last night’s episode, there seems to be something more to it.” The letter could further be read as, “KV was told he had no ‘Fizz’, that he probably never did, and wouldn’t even after BB. He is a celebrated actor who has done only hit shows – ‘Kasauti’, India’s number one show, ‘Saubhagyawati Bhava’, Life OK’s number one show, and recently, Naagin 2 on this very channel, another number one show. He is a highly respected, award-winning actor and a fine human being. Please appreciate the years of hard work it has taken to earn his respect. I have also noticed the way many double standards in BB, let me share some.” 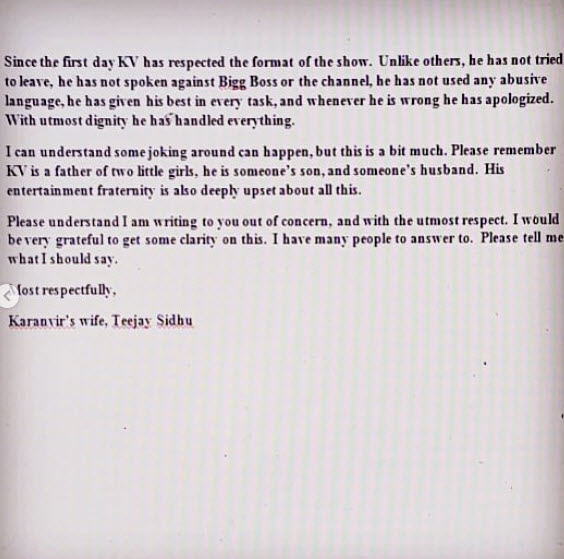 Teejay further wrote, “When people made fun of Rohit’s purple shorts, they were questioned about it. Whatever KV wears on WKW, he is always ridiculed, whether it’s his hair, his clothes, his look. It’s wrong to shame someone for the way they look, or how they dress. KV is often accused of showing fake mahanta, but when Romil gives up his video message for Somi, he is given an award and applauded. Since the first day KV has respected the format of the show. Unlike others, he has not tried to leave, he has not spoken against Bigg Boss or the channel, he has not used any abusive language, he has given his best in every task, and whenever he is wrong he has apologized. With utmost dignity, he has handled everything.” (Also Read: Deepika Padukone-Ranveer Singh's Functions Have Already Begun, Guests Say They're Love Personified) The doting and caring wifey concluded the note by writing, “I can understand some jokes around can happen but this is a bit much. Please remember KV is a father of two little girls, he is someone’s son, and someone’s husband. His entertainment fraternity is also deeply upset about all this. Please understand I am writing to you out of concern, and with utmost respect. I would be very grateful to get some clarity on this. I have many people to answer to. Please tell me what should I say. Most Respectfully, Karanvir’s wife, Teejay Sidhu”. (Also Read: Together For 10 Years: The Aww-Inspiring Love Tale Of Karanvir Bohra And Teejay Sidhu) 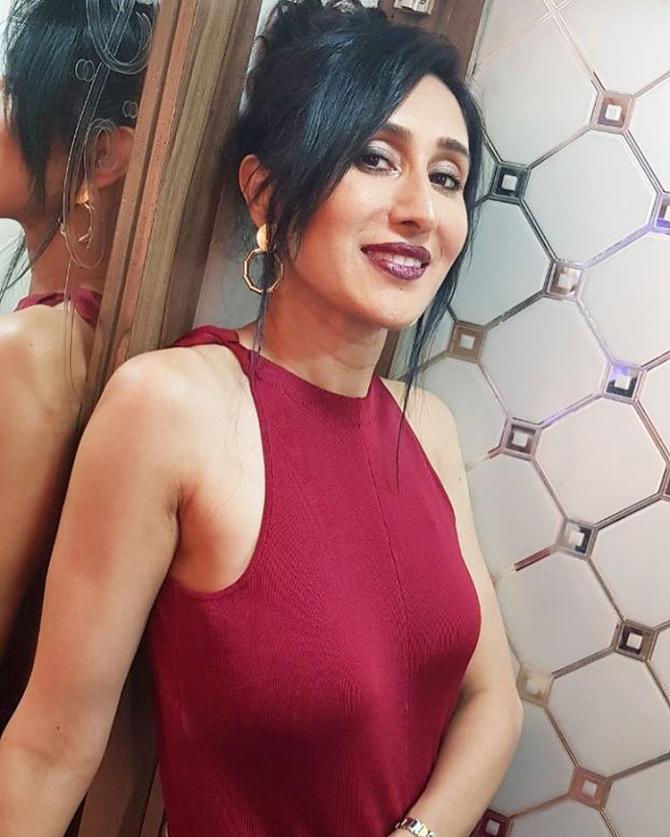 She captioned the post as, “It's okay to joke around and tease someone, but there comes a point when a person may be feeling genuinely upset. He may smile, but it doesn't mean he's happy, it just means he is trying not to show his pain. @karanvirbohra #BiggBoss12”. Later, she again took to her account and shared a snap of Karanvir Bohra from Sultani Akhara. Along with it she wrote, “#November12th #letterstoKVB Hi sweety. I just wanted to tell you I am so proud of you. No matter what the situation, what you have to go through, you always show so much grace. However, in yesterday's episode, you were ridiculed for your dress sense, and then laughed at in Suktani Akhada. I saw you smiling but I knew you were hurt. I felt like crying seeing you like that. If there is one thing I've learned from BB, though, it's that you should always stand up for what's right. And I will always stand by you. You are never alone. Sending you prayers and strength, my love,” followed by a heart emoji. (Checkout: Sonali Bendre's Anniversary Wish For Hubby Goldie Behl Is Pure Love And Will Surely Make You Cry) 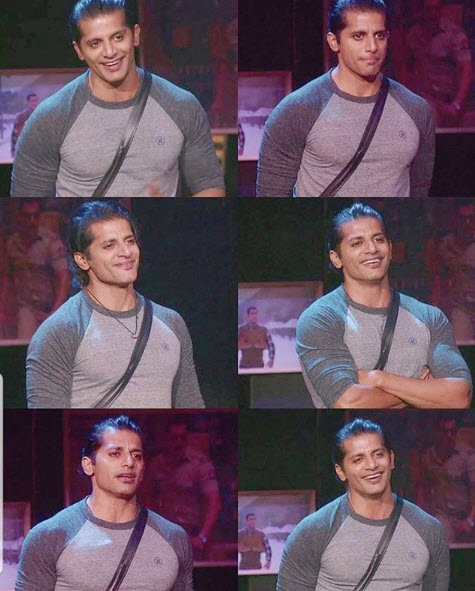 This time, it seems that it didn’t go well with many of Karanvir’s fans as well as his industry friends. Simple Kaul reposted Teejay’s post and wrote on Twitter, “Salman Khan is so mean to @KVBohra   and only him . donno why ??? Hated his nasty comment on fizz #BigBoss12”. Nigar Khan went on to write, “Why is @KVBohra  targeted for everything .. poor guy gets questioned for the tiniest things and is ridiculed .. #notfair @BiggBoss #BiggBoss12” and added, “I wish the weekend episodes cld be a lil fun to @KVBohra .. why so tough on him when he is the nicest soul in #BiggBoss12 @BiggBoss”. Here are their tweets and also of Karanvir’s fans who support him: What’s your take on this, guys? Do let us know in the comments box below! 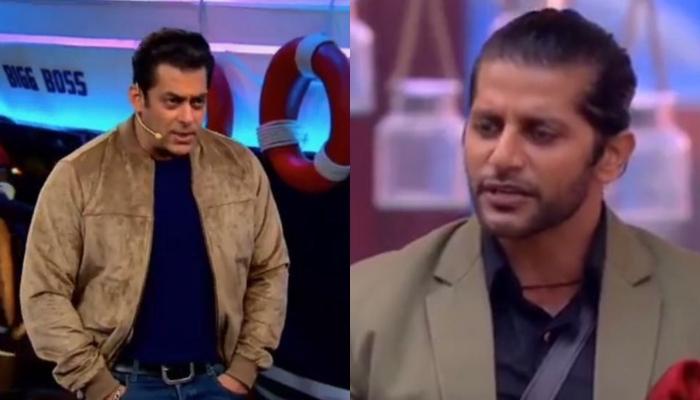 The most controversial and famous Indian reality TV show, Bigg Boss, is running in its 12 season. Every season we closely get to see many of our favourite and renowned celebrities. This season we have Sreesanth, Dipika Kakar, Srishty Rode and others, but who is stealing the limelight, somewhere down