Just Mohabbat fame actor, Karanvir Bohra didn't win Bigg Boss 12 but he has definitely won a million hearts. Being one among the top 5 contestants wasn't an easy task for him, especially given the fact that he was often ridiculed and cornered by many of his co-contestants. Now that BB12 is over, Karanvir Bohra is spending some quality time with his wife, Teejay Sidhu and their twin daughters- Vienna and Bella. (Suggested Read: Srishty Rode Helps Rohit Suchanti To Up His Social Media Game Post Break Up With Manish Naggdev)

Karanvir and Teejay's baby daughters- Vienna and Bella are in no way less of stars on social media. And a recent video posted by their doting father will move you to the tears. Before we get into the details of the video, let us remind you of a task which happened inside the Bigg Boss 12 house in which the contestants had to sacrifice some precious belonging. And Karanvir had to give away his daughter, Bella's pink puppy. But guess what? Bella's most prized possession is now back with her! Karanvir Bohra has shared a video in which we can see an elated Bella with her pink puppy, but there is a bit of sadness inside her owing to the drained out colour of the toy. Thanking Bigg Boss, Karanvir captioned the following video as, "Thanks to#biggboss for returning #bellas #pinkpuppy she was so ecstatic and Happy when she saw it, but there was a lil pain to see it turn yellow.... babies are truly the purest souls on this planet. for the full video look up at the @twinbabydiaries #youtube page."

Talking to the Times of India, Karanvir expressed his joy and recounted the experience. He was quoted as saying, "I cannot express my happiness on seeing the toy back with my daughters. Bigg Boss was really sweet to not destroy the toy according to the task and rather keep it safe and give it back to me after the show got over. It was overwhelming. Its just that the colour of the toy has changed from pink to yellow now and the girls are taking time to realize that it is their same old pink puppy," he laughed. "I was really emotional when I saw the sweet gesture and can't thank BB enough for being so kind."

Karanvir Bohra recently shared an adorable video on social media showing to his fans how his daughters, Bella and Vienna reacted on seeing him for the first time post his Bigg Boss 12 journey. He captioned it as, "I can't put into words the feeling you get when you see your children after so long."

Teejay Sidhu, after her husband, Karanvir Bohra's return had shared an emotional note on Instagram. Teejay had shared an adorable picture of her husband along with their twin daughters- Vienna and Bella. She had captioned it as, "This is what matters.. being someone your daughters can be proud of. I am also so proud of you, sweety. To be in #BiggBoss from the first day until the last day, to walk away with dignity, #respect and #love is a huge achievement. Reality shows will highlight negativity and a person's shortcomings to get TRPs. But you were such a good human being, you set a new BB benchmark with your dignity, your grace, your patience. And you will always be remembered for that. You may not have won the trophy, but you were the winner of the show - you won millions of hearts! I love you, I respect you, always." (Must Read: Taimur Ali Khan And Inaaya Naumi Kemmu Meet For A Playdate, She Watches Him Run Towards The Swing) During his stay inside the Bigg Boss 12 house, Vienna and Bella missed their father a lot. Talking about the same, Teejay had earlier shared in an interview as to how much they miss their dad, and how did they react when they see him on television. Teejay was quoted as saying, “I have a huge family so in his absence they are there with me. But I would say our daughters miss him a lot. Initially, they used to get excited when a doorbell rang imagining KV has come. But now, they know that KV is in Bigg Boss. Every night when Bigg Boss starts they start waving towards him saying, ‘Bigg Boss, Hi dad’. And when he is moving here and there in the episode and talking to someone they feel as if he is talking to them and they say, ‘Dad, come back’. They feel now he lives inside the TV”.

Teejay had always been supportive of Karanvir during his stay inside the BB12 house. She once wrote an open letter on Twitter which could be read as, " Respected Bigg Boss team, I saw the Sunday Weekend Ka War and wanted to share some thoughts with you. First of all, I don’t know if myself and Karanvir have upset you guys in any way, but if we have, I sincerely apologize. It seems you are upset with KV about something, but we don’t know what. Every Weekend KV is ridiculed and it is hard to see him being demoralized like this. At first, I just thought it was harmless leg-pulling, and even defended the same. But after last night’s episode, there seems to be something more to it." 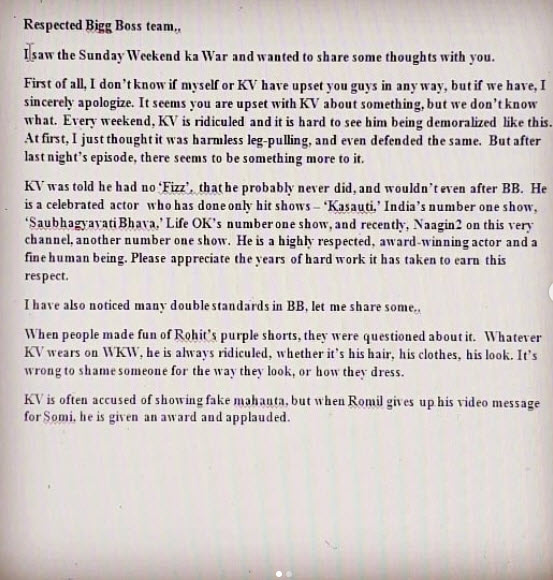 The letter could further be read as, “KV was told he had no ‘Fizz’, that he probably never did, and wouldn’t even after BB. He is a celebrated actor who has done only hit shows – ‘Kasauti’, India’s number one show, ‘Saubhagyawati Bhava’, Life OK’s number one show, and recently, Naagin 2 on this very channel, another number one show. He is a highly respected, award-winning actor and a fine human being. Please appreciate the years of hard work it has taken to earn his respect. I have also noticed the way many double standards in BB, let me share some.” Read the full statement of the letter here. Teejay later again took to social media and revering her husband, wrote, “#November12th #letterstoKVB Hi sweety. I just wanted to tell you I am so proud of you. No matter what the situation, what you have to go through, you always show so much grace. However, in yesterday's episode, you were ridiculed for your dress sense, and then laughed at in Suktani Akhada. I saw you smiling but I knew you were hurt. I felt like crying seeing you like that. If there is one thing I've learned from BB, though, it's that you should always stand up for what's right. And I will always stand by you. You are never alone. Sending you prayers and strength, my love.” (You May Like: Anushka Sharma Can't Stop Laughing At Her 'Cutie' Virat Kohli And He Has No Clue Why, Video Inside) 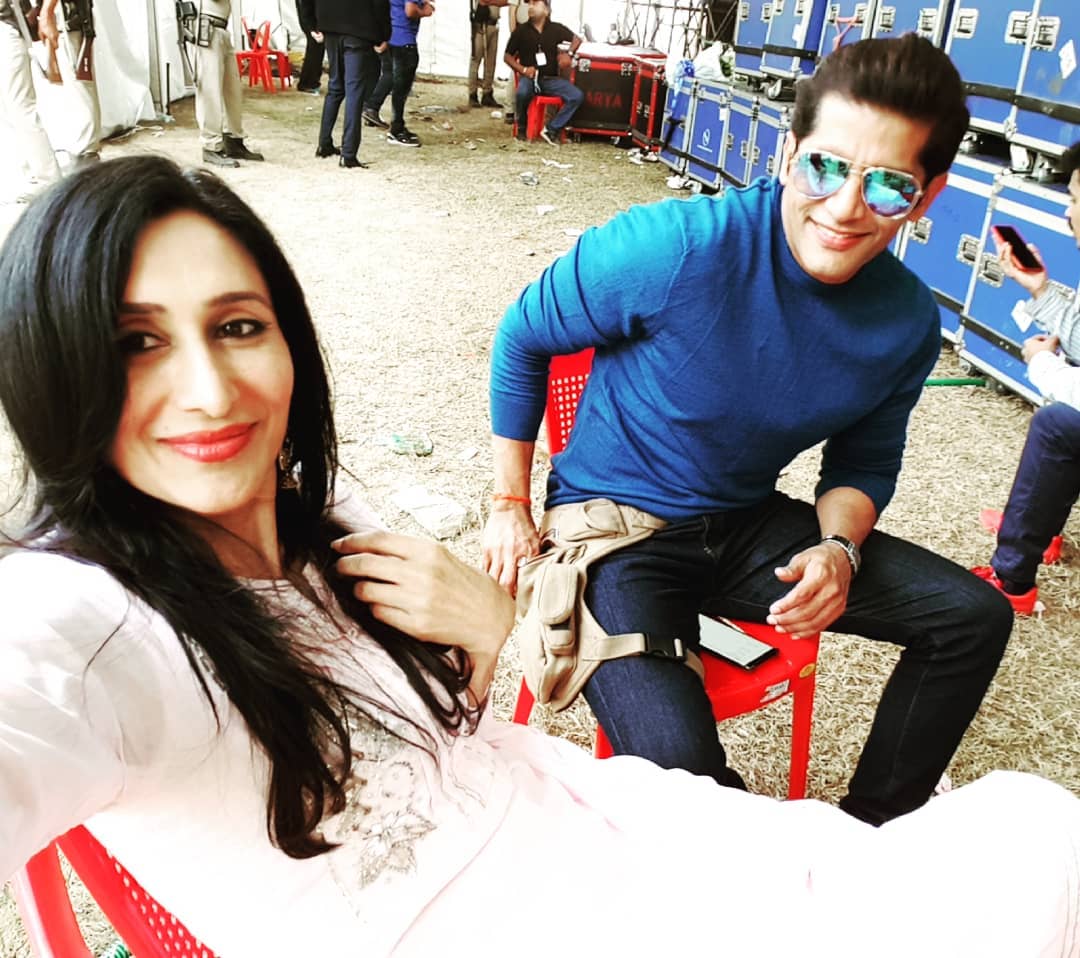 Karanvir's baby daughter, Bella's happiness on seeing her puppy back is beyond adorable, right? Bigg Boss 12 contestant, Karanvir Bohra is one of the most talked about celebrities this season. Karanvir is married to famous model-actress-host, Teejay Sidhu and together they have two sweet little twin angels, Bella and Vienna. Teejay hit the headlines recently, for when she lashed out at the makers of