Anand Ahuja Ties Mangalsutra To His Wife Sonam Kapoor Ahuja, She Is Smiling With Happiness

Anand Ahuja Ties Mangalsutra To His Wife Sonam Kapoor Ahuja, She Is Smiling With Happiness 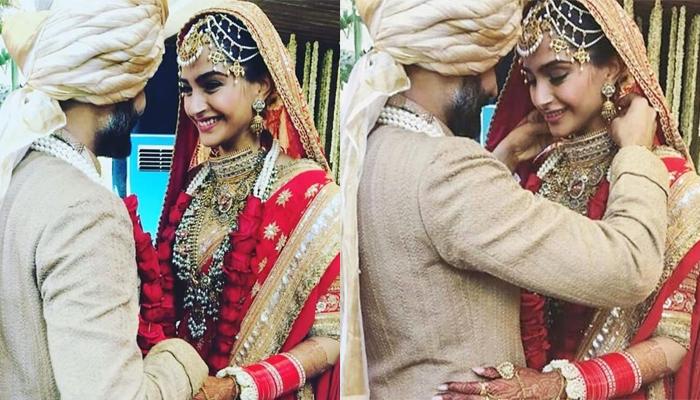 In one of the latest pics that has surfaced online, the most sacred moment for which any bride or girl waits for her life arrived for Sonam Kapoor. Yes, we’re talking about the tying of the holy mangalsutra! Anand Ahuja could be seen tying mangalsutra to Sonam Kapoor, and she is all smiles. We can’t help but drool over their amazing wedding pics.

Today, Sonam’s aunt, Kavita Singh’s heritage bungalow, called Rockdale in Bandra is filled with celebrities and whos-who of Mumbai. Everyone has gathered for Sonam and Anand’s wedding. Their wedding is a proper Sikh wedding which happens along the tradition of Anand Karaj in which the wedding vows are taken in front of the holy Guru Granth Sahib. (You May Like: Nita Ambani Dances With Daughter Isha Ambani In Her Engagement Party, It's Pure 'Maa-Beti' Goals)

Considering that Sonam is a big fashionista, everyone had been waiting for her wedding look for long. And she didn’t disappoint and looked every bit perfect. In her on-going wedding, Sonam Kapoor is radiating beauty in Anuradha Vakil’s red wedding lehenga with intricate embroidery of lotus designs. Her minimal make-up has been done by Namrata Soni. Also, her multi-layered maang teeka is definitely giving some major bridal goals. On the other hand, groom Anand Ahuja complemented his damsel and lady by looking dapper in a beige and cream-coloured sherwani with a pagdi, and an exquisite haar in the neck.

Take a look at more pictures from Sonam and Anand’s wedding:

Earlier, the Kapoors and Ahujas confirmed the union of Sonam and Anand by announcing the big news, “The Kapoor and Ahuja families, take great joy and pride, in announcing the marriage of Sonam and Anand. The wedding will take place on the 8th of May in Mumbai. Since it is an intimate affair, we request you to respect the family's need for privacy. Thank you for all your blessings and love, as we celebrate this special moment in our lives”. (Don't Miss: Sonam Kapoor-Anand Ahuja Are Married, Here're The 1st Pics Of The Happy Couple After 'Anand Karaj')

Last night, on May 07, 2018, the Kapoors hosted a sangeet ceremony and that was fun-filled and rocking. From papa Anil Kapoor to bhai Arjun Kapoor, everyone danced crazily.

Now, that the sangeet and wedding are done, we are waiting for the rocking reception to be held tonight.

Next Read: Sonam Kapoor's Brothers Pose For A Picture Together With Her Red Entry Dupatta On Her Wedding 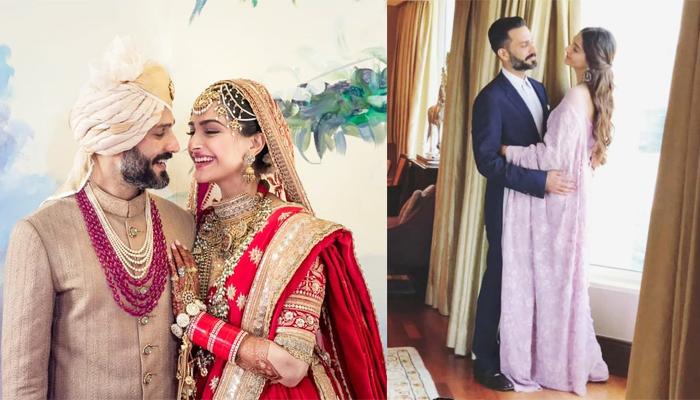