The rich wives of billionaire businessmen of India are not just social butterflies, splurging on their husband’s money but independent women who have an identity of their own. These women are smart, influential, beautiful and kind. All these women are involved in philanthropic work for the betterment of the society. These women believe in making our country and its people better by spending their money at the right place, instead of wearing it! 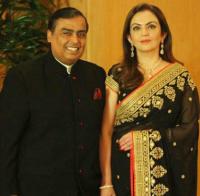 Nita Ambani is the chairperson and founder of Reliance Foundation. She is happily married to Mukesh Ambani, chairman and Managing Director of Reliance Industries. With an estimated net worth of Rs 7,983 crore, her average annual income is Rs 72 crore. And, she is among the wealthiest women in India. She is not just a rich wife, but a philanthropist who believes in helping poor and needy. A mother of 3, Nita at the age of 54 is an avid art collector, the chairperson of Dhirubhai Ambani International School and also the owner of Mumbai Indians team in IPL. 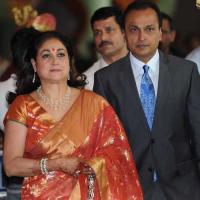 A former Bollywood actress, Tina Ambani is married to the chairperson of Reliance Group, Anil Ambani. After a successful stint in Bollywood for a decade, she said goodbye to her career to become Mrs. Ambani and a mother to her two sons. Her net worth is said to be Rs 2,331 crores. Today, she is the chairperson of Kokilaben Dhirubhai Ambani Hospital and the founder of Harmony for Silvers Foundation and Harmony Art Foundation. She loves promoting young artists and their work, apart from her charity work.

She is the wife of Shiv Nadar, the man who founded HCL Technologies. Kiran Nadar is a strong, independent woman who is an art curator and philanthropist. She is the trustee of the Shiv Nadar Foundation and the founder of the Kiran Nadar Museum of Art. She met Shiv Nadar at an advertising agency where she worked and the two got married. The couple has a daughter named Roshni who is happily married with kids. At the age of 67, Kiran is one of the richest billionaire wives in India and has a total wealth valuation of Rs 20,120 crore. She also made her debut in the Asian Games this year with the card game of bridge.

Sudha Murthy is the wife of Narayana Murthy, the founder, and chairperson of Infosys. She began her career as a computer scientist and today, she is the chairperson of the Infosys Foundation and a member of public healthcare initiatives of the Gates Foundation. She also started an initiative to provide computer education in all the schools of Karnataka and was awarded ‘Best Teacher Award’ by the rotary club of Bangalore. She is also a celebrated author with many books in Kannada and English in her kitty. She is also a movie buff and loves watching films on her home theatre. Her net worth is Rs 2480 crore.

Must Read: Sanjay Dutt And The Women In His Life, From Tina Munim, Madhuri Dixit To Maanayata Dutt 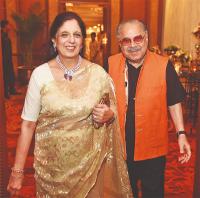 Monica Burman is the wife of Vivek Burman, who is the chairman emeritus of Dabur India. Her net worth is Rs 2260 crore. She has made it to the Billionaire wives list this year. She is the backbone of the Burman family and a support system to her husband and her two sons. She is known for her exquisite sarees and expensive designer jewellery. She is a homemaker and also a stakeholder in Dabur India. 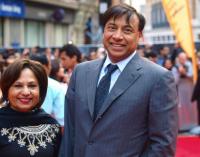 Usha Mittal is married to Lakshmi Niwas Mittal, the Indian steel magnate, the CEO of ArcelorMittal, world’s largest steelmaking company. Usha along with her family is based in the United Kingdoms. Usha and Lakshmi are blessed with two children, a daughter, and a son. She has been listed in ‘Wives of Billionaires’ by Forbes. Last year, ArcelorMittal, passed a resolution that she has the authority to manage and take decisions in the absence of managing board of directors. This is all because she has given her 15 precious years to her husband’s company. She is also the namesake of the Usha Mittal Institute of Technology and promotes women education in India. 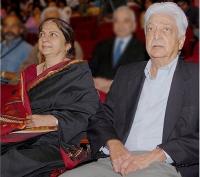 Yasmeen Premji is the beautiful wife of Wipro Limited chairman, Azim Premji. Today, she is doing charity through her foundation, Azim Premji Foundation. During her early years of career, she worked as an assistant editor for Inside Outside, a design magazine. She is a philanthropist, who believes in sharing her wealth with the needy, for the development of the society. 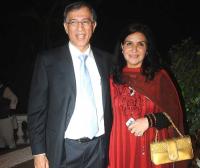 Natasha Poonawala is the wife of Adar Poonawala, who is the CEO of Serum Institute of India. She is one of the most glamorous billionaire wives in India. Adar and Natasha have two children together. She is the executive director of her husband’s company and also a philanthropist. She believes in doing her bit for the society, through Villoo Poonawalla Foundation. She is known for being a style enthusiast and owns a lot of luxury designer outfits and accessories. 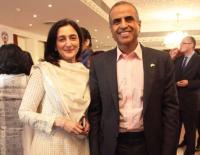 Nayna Mittal is happily married to Sunil Mittal, the founder, and chairman of Bharti Enterprises who owns telecom network, Bharti Airtel. She is a philanthropist who is working towards the betterment of the society, by educating the underprivileged through Bharti Foundation. Under her foundation, she has opened several schools in villages and is providing free education to the children there. Nayna along with her husband Sunil have decided to donate 10% of their wealth towards philanthropy.

These women totally believe in sharing their wealth with others, for the betterment of the society. They are not only rich wives with lots of money, but women with kind hearts, made of gold.

Next Read: 16 Beautiful Bollywood Actresses Who Have Successful And Super-Rich Millionaire Husbands