A country like India is obsessed with only one sport and it is cricket. Cricket is worshipped in our nation and cricketers are loved as God. In such a scenario, the achievements of players playing other sports go unnoticed. Cricket has overshadowed other sports in India and it is high time that we start paying equal attention to other sports as well. There are sportsmen and sportswomen from other sports like hockey, tennis, wrestling, and badminton etc. who have brought accolades to our country and we are equally proud of them.

Unlike cricketers, these sportspersons’ personal life is too private and not much is known about them. Let’s take a look at some of the finest sportsmen and sportswomen of India and their better halves who are their support system and their constant source of motivation. The ace tennis star, Sania Mirza left everyone surprised when she decided to tie the knot with a Pakistani cricketer named Shoaib Malik. The couple tied the knot in 2010 and are expecting their first child in a few months. Sania and Shoaib met at a restaurant and later Shoaib came to see her match. Soon, the two became friends and fell in love. 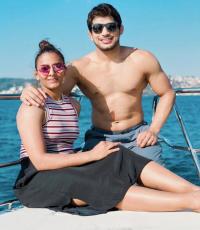 Geeta Phogat is the first woman wrestler in India, who won a gold medal at the Commonwealth Games in 2010. The Aamir Khan starter, Dangal was based on her journey of becoming world’s no. 1 under the guidance of her father. The star wrestler tied the knot with a fellow wrestler, Pawan Kumar, in a traditional ceremony in 2016. They met in 2016 only and instantly clicked. After talking to each other regularly for months, the couple decided to get married. Pawan is five years younger to his wife, Geeta.

Mary Kom, the five-time female boxing champion, belongs to the state of Manipur. We know a lot about her life as Priyanka Chopra played her role in the blockbuster biopic on Mary in the movie Mary Kom. She is happily married to the footballer, Karung Onkholer since 2005, and the couple is blessed with three sons. They met in 2000 after her luggage was stolen in a train, while traveling for a sports meet. After dating for almost 4 years, the couple tied the knot in a traditional ceremony. 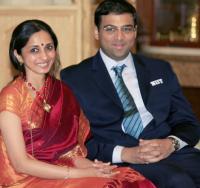 Who doesn’t know the great Vishwanathan Anand? He is the chess grandmaster of India and the former world champion. Currently, he is the World Rapid Chess Champion. A Tamil Brahmin by birth, Vishwanathan is happily married to Aruna Anand since 1996. Vishwanathan and Aruna have a son together, who was born in 2011. In August 2010, Anand joined as one of the boards of directors of Olympic Gold Quest. 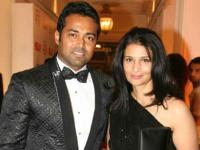 Leander Paes is an Indian tennis player who is considered as one of the best tennis players for doubles and mixed doubles. He was won accolades for his great performance in the Grand Slams over the years. He has won eight doubles and ten mixed doubles Grand Slam titles and is the oldest man to have won a Grand Slam title. Leander was in a live-in relationship with Sanjay Dutt’s ex-wife, Rhea Pillai for 8 years i.e. from 2005 to 2013. The couple was blessed with a daughter named Aiyana in 2006. In 2014, Rhea filled a domestic violence case against her estranged partner and asked for her daughter’s custody and alimony for her upbringing. The two are still fighting a legal battle in the court for their daughter.

Indian football team captain, Sunil Chhetri got married in an intimate ceremony to his long-time girlfriend, Sonam Bhattacharya in November 2017. The couple had a traditional Nepali wedding and was attended by only close friends and family. He is happily married to the daughter of Mohun Bagan legend, Subrata Bhattacharya. His wife, Sonam is a business management graduate from Scotland and runs two hotels in Kolkata. Sonam was his big fan and the two had a love marriage after dating for many years.

Suggested Read: Karisma Kapoor Was About To Become A Bachchan 'Bahu' But Ended Up Becoming Sanjay Kapur’s 2nd Wife

India’s greatest Olympian wrestler, Sushil Kumar has made Indians proud many a times on the international platform. Sushil tied the knot in an arranged marriage ceremony in 2011 to Savi Solanki. In the first year of their marriage, the couple hardly spent 2 months together, as Sushil was busy preparing for the Olympics. He considers his wife to be his lucky charm.

The best striker of Indian football team, Baichung Bhutia is now retired from the Indian Football. The young, smart and talented Baichung of the Sikkimese-Bhutia descent is often referred to as the ‘God’s gift to Indian football’. He got married to his sweetheart, Madhuri Tipnis in 2004 in a traditional wedding but the couple ended their 11 years of marriage in 2015. The reason behind their split was that Madhuri was on a trip and unexpectedly returned early from her vacation and saw her husband in a compromising position with another lady. She immediately packed her bags, left the home and decided to get divorced ASAP. The ex-couple is blessed with a son and two daughters.

Sakshi Malik, the young girl who changed the face of Indian freestyle wrestling after she won a bronze in Olympics in 2016, becoming the first female wrestler to win a medal in Olympics. After her win at the Olympics, Sakshi announced her marriage to Indian wrestler, Satyawart Kadian. The couple tied the knot in April 2017 in Rohtak, Haryana. The couple had a grand wedding which was attended by the eminent personalities of Indian sports and politics. 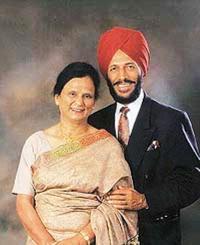 Milkha Singh, better known as the ‘Flying Sikh’ is the former Indian sprinter who won a gold medal for India in Commonwealth Games and Asian Games. Honoured with Padma Shri, Milkha’s journey as a sportsman has been so inspiring that a Bollywood film by the name of Bhaag Milkha was made on him. Farhan Akhtar played the role of Milkha Singh. Milkha is married to Nirmal Kaur, a former captain of the Indian women's volleyball team. The couple met in Ceylon in 1955 and after a few years of courtship, they tied the knot in 1962. The couple is blessed with three daughters and a son. They also have an adopted son.

Check Out: 10 Strikingly Beautiful Wedding Photo Poses That We Can Steal From Celebrity Marriages

Ace tennis player, Mahesh Bhupathi who has 11 Grand Slams in his name fell head-over-heels in love with the former Miss Universe and Bollywood actress, Lara Dutta. The couple tied the knot in a private ceremony in 2011 and are blessed with a daughter named Saira, who was born in 2012. The couple had a fairytale Christian wedding in Goa after their court marriage in Mumbai.

All these sportsmen and sportswomen have made our nation proud and we will forever be grateful to them. Just like their lives, their love stories are also inspiring, simple and beautiful.