In the age of this digital world, when one cannot escape the obvious penetration of social media into our lives, the superstars of Bollywood have transcended every level of stardom. With the advent of digitalisation, every nook and corner of our society and even a not-so-film-buff, with their handhelds, are just one step away from their stars.

But then, because of this whole discourse and the way stardom is seen these days (wherein everyone wants to up his game and gain followers on social media), we often tend to disregard many celeb couples who are worthy and deserving of much attention. And hence, we have got for you a list of non-mainstream couples who also deserve an equal appreciation.

This powerhouse of talent couple deserves more attention and appreciation for their art. One is an ace film director, music composer and writer, and the other is a supremely talented soulful singer. Under a single roof, they have together created songs such as Phir Le Aaye Dil, Genda Phool, Raat Ke Dhai Baje, among many others. Vishal met Rekha during his graduation years when he was in Hindu College, Delhi, and she was a year senior to him academically. Since then, together they have only soared upwards with their films and music.

Another extremely talented couple, Naseeruddin Shah and Ratna Pathak Shah have all the feathers in their cap of glory but they deserve much more appreciation and attention, right? After all, they are no less than our superstars, and in fact, in many ways, these two are way ahead than the former lot. Who can forget Maya Sarabhai from Sarabhai vs Sarabhai, and to list Naseeruddin Shah’s achievements would itself be an understatement.

Also Read: Married With Naseeruddin For 35 Years Now, Ratna Shares A Warm Relation With Her Step-Daughter

This husband-wife director duo is beyond any limits. While Balki has left us all mesmerised with his films like Cheeni Kum, Paa and PadMan; Shinde, on the other hand, has directed soulful movies like Dear Zindagi and English Vinglish. We can’t even imagine what it must be for the two living under the same roof with so much talent!

Not many even know that these two are married. Where do you go to watch a movie review on YouTube every time you stumble upon a new release? Anupama Chopra on Film Companion, right? And if we ask you which is the best Bollywood movie made in the last decade, wouldn’t your answer be anyone among these- Sanju, PK, 3 Idiots and Lage Raho Munna Bhai? Vidhu Vinod Chopra’s filmography as a director and producer is much beyond these four. But really, we totally place our bets on this dynamic duo power couple who deserve much more than the attention they are currently getting.

Every film buff respects and revere this couple for the roles that they have managed to supremely pull off, in both television and big screen. Pankaj Kapur has played roles in iconic serials like Office Office and Karamchand, and his wife, Supriya Pathak has stumped us with her role of Hansa in the TV serial, Khichdi, and in films like Wake Up Sid and Ram Leela. Even though the two are separately respected names in the industry, but as a couple attention and stardom is due in their basket.

The current chairman of FTII and an actor who has over 500 films in his kitty, Anupam Kher is a legendary actor. Not just Bollywood, he has also acted in many Hollywood movies and was nominated for a BAFTA award for his role in the British TV series, The Boy With The Topknot. His better half, Kirron Kher has also established herself an actress in the Hindi film industry having worked in great movies like Devdas and Rang De Basanti.

You May Like: Second Time Lucky In Love: A Beautiful Love Story Of Anupam Kher And Kirron Kher

Being extremely selective of his film choices, Kay Kay Menon has made a name for himself in the industry. With his superb roles in films like Haider, Gulaal, Black Friday, among many others, Menon is regarded as one of the finest actors in Bollywood. His wife, Nivedita Bhattacharya, is a top TV actress, having acted in serials like Saat Phere, Mughal-e-Azam, among others. Unfortunately, these two, as a couple, haven’t enjoyed much attention that they so rightfully deserve. 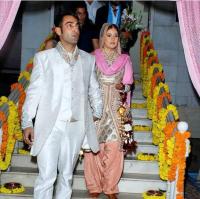 This is a fairly young couple, as compared to the others on the list. Meher Vij got catapulted to fame with her recent roles in movies like Bajrangi Bhaijaan and Secret Superstar. Manav, on the other hand, was earlier a doctor by profession but then he appeared in TV serials like Kyunki Saas Bhi Kabhi Bahu Thi. He also had small roles in movies like Udta Punjab, Rangoon and Phillauri. Not many know that Manav and Meher are husband and wife. 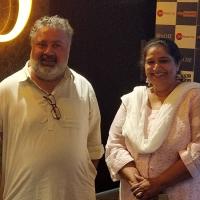 Manoj Pahwa and Seema Pahwa make another great couple in the tinsel town but haven’t received much stardom. While Manoj gained limelight with his role in Office Office and then through Bollywood movies like Dil Dhadakne Do, Singh Is Kinng, among others, his wife, Seema has become everyone’s favourite mom on-screen with her roles in recent films like Dum Laga Ke Haisha and Bareilly Ki Barfi.

If you are a millennial, you might recognise these two phenomenal actors who have appeared in many online videos of various YouTube channels. Remember Tanya’s mausi in the web series, Permanent Roommates? She is Ayesha Raza. Apart from millennial content, these two have appeared in many Bollywood films and TV serials. Kumud’s last film was Mulk and Ayesha’s last appearance was in Veere Di Wedding.

So, guys, these were 10 celeb couples who are a powerhouse of talent and deserve more stardom and attention. What do you think? In case, we missed any couple, do let us know in the comments section below.