Shahid Kapoor's Biological Mom, Neelima Azeem On Her Happiness Being A Grandmother Again

Shahid Kapoor's Biological Mom, Neelima Azeem On Her Happiness Being A Grandmother Again A few days ago, Shahid Kapoor announced on social media that he is all set to become a father again. Speculations, majorly because of wifey Mira Rajput’s choice of clothes recently, were riff that she is pregnant. (Also Read: Shahid Kapoor On Mira's Second Pregnancy: 'It Was A Spontaneous Decision And It Just Happened.')

Shahid took to social media and in a subtle way, posted a picture of his and Mira's baby girl, Misha Kapoor. But the picture also said, “Big sister.” Take a look:

Now, speaking of Mira’s pregnancy, apart from her and Shahid, if there is another person who cannot control her happiness, it has to Neelima Azeem. Ishaan Khatter and Shahid Kapoor’s biological mom, Neelima is over the moon for two reasons. First, Ishaan’s performance in Beyond The Clouds is being appreciated by everyone around the world, and second, she is going to be a grandmother again!

Talking to Pinkvilla, Neelima said, “I am very excited and happy and so looking forward to my second grandchild! I am very happy for Misha too as she will have a sibling and a playmate. Now the family will be complete. The kind of happiness that Misha has given all of us and given me has been amazing! Misha is my world so I am very excited to have another grandchild! When you hold a little baby in your arms everything fades away and only a huge feeling of gratitude remains.” (Suggested Read: Shahid Kapoor's Half-Brother Ishaan Khatter Talks About His Mom, Neelima Azeem's 3 Failed Marriages)

She further added, “It doesn’t matter to us whether the baby will be a boy or a girl – it should be healthy. I have two wonderful sons and they are such good and loving boys that I never felt I lacked in anything. Shahid and Ishaan had an age difference of 13 years and then I used to want a daughter. When I heard that Mira had delivered a little girl I was over the moon. Now I have a lovely daughter in Mira and a granddaughter. Everything has turned out very well and now we are looking forward to the little one. God is great!”

Talking about the proud moment of seeing her son Ishaan’s performance in Beyond The Clouds and her feelings about the same, Neelima said, “As far as Ishaan is concerned, he has arrived like no newcomer has. Look at the kind of write-ups and accolades he has got. People are calling him best actor, etc. It’s fantastic! I was shocked when I saw Ishaan in Beyond The Clouds – the reason being that however good any newcomer will be, he won’t have the mastery over his craft as I saw Ishaan have. He is brilliant in the film. Ishaan is too accomplished for a newcomer. I really think what he has done in his first film that even for me as another actor and artiste and not as a mom, I was absolutely stumped. I had expected a lot from him but he completely took me by surprise which is the general reaction to him.” (Also Read: Randhir Kapoor-Babita's Marital Life: 31 Years Of Separation, No Divorce, Failed In Reconciliation)

Earlier, elated father-to-be, Shahid commented on Mira’s pregnancy and said, “Yes, of course. I'm very happy. We just felt like sharing it with everybody. Mira said she wanted to put it out on Instagram and I thought the photograph was really cute. It was a spontaneous decision and it just happened.”

We cannot even imagine the state of happiness Neelima Azeem must be in these days. We can’t wait for Shahid Kapoor and Mira Rajput’s second baby to arrive.

Next Read: 'Massis' And 'Buas' Of Bollywood And TV Who Share A Beautiful Bond With Their Niece And Nephew 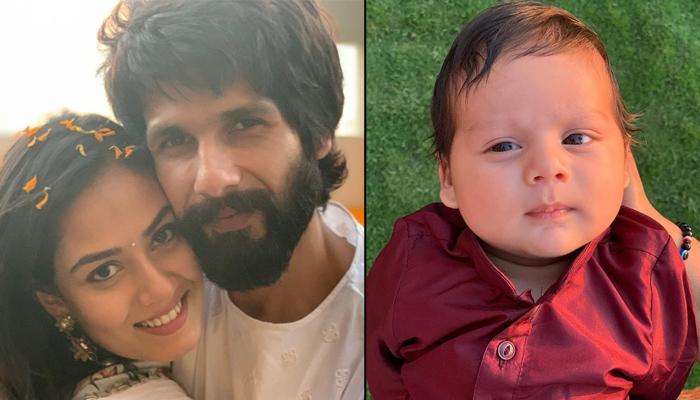 When Shahid Kapoor and Mira Rajput Kapoor’s daughter, Misha Kapoor said ‘hello’ to the world, that memory still rings fresh in our minds. After teasing their fans with little glimpses of Misha, Shahid finally shared a lovely picture of Mira cuddling Misha, on his Instagram handle and captioned it, “Hello