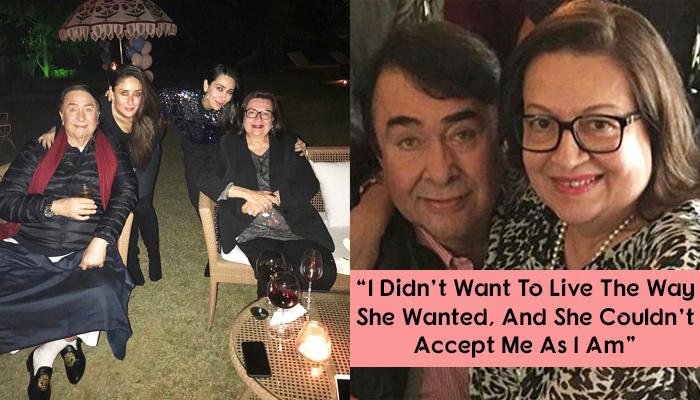 In the tinsel town, marriages are the centre of media and people. Some marriages last forever, some do not, and then there are a few which goes estranged. Such is also the case of Randhir Kapoor and Babita Kapoor.

A little background of the two

Randhir Kapoor was born on February 15, 1947, to the legendary filmmaker and actor, Raj Kapoor and his wife Krishna Kapoor. He has four siblings- Rishi Kapoor, Rajiv Kapoor, Rima Kapoor and Ritu Kapoor. Randhir began his acting in 1971 with the film, Kal Aaj Aur Kal which also starred his father and grandfather, Prithviraj Kapoor. He has acted in more than 100 films since then. In 2012, in Housefull 2, he acted alongside his brother, Rishi Kapoor for the very first time. The last Hindi film which starred Randhir Kapoor was Super Nani in 2014.

Born as, Babita Hari Shivdasani, on April 20, 1947, Babita was the daughter of actor Hari Shivdasani. She made her acting debut with the 1976 film, Dus Lakh which also starred her future sister-in-law, Neetu Singh (now Kapoor). She has acted in 19 films in her acting career.

How the two met and early struggles

In 1969, Randhir Kapoor was accompanying his father, Raj Kapoor on the sets on Sangam. Future wifey, Babita also happened to be there and needless to say, young Randhir fell for the doe-eyed beauty, Babita instantly. They started meeting on the sets and eventually started seeing each other on chupke chupke dates. But two years down the line of their courtship, Babita started having apprehensions about her relationship as it was the Kapoor family tradition that Kapoor bahus cannot act in the films after marriage. So, she asked Randhir either to marry her or dump her.

Because Babita was also an actress, Randhir thought it would be best if she is signed for a film in which he is also acting. That was the only way through which Randhir could have introduced the love of his life to the Kapoor family. His father, Raj Kapoor had no issues in taking Babita as the lead actress in the 1971 film, Kal Aaj Aur Kal and working together professionally but the idea of making her the bahu of Kapoor khaandaan was something he couldn’t agree to initially. However, realising his son’s love for Babita, the Kapoors gave in on the condition that Babita should quit acting after marriage. Babita, who was in head over heels in love with Randhir, adhered to the patriarchal tradition and finally on November 6, 1971, Randhir Kapoor and Babita got married in a Punjabi wedding at the Kapoor residence.

Don't Miss: 11 Indian Television Celebrities Who Proposed To Their Partners On Reality Shows

Everything was going smoothly in Randhir Kapoor and Babita’s marital life. Even though Babita had quit acting to marry her man, it never crept up to bitter any relationship with her husband or in-laws. Even Randhir’s career was going pretty well and in 1974, their first child, Karisma Kapoor was born. All was well for the next few years as well, however, Randhir’s career started to seeing a downfall and by the 1980s, none of his films was doing well at the box-office.

The trouble majorly started in 1981 when their second child, Kareena Kapoor was born, as the financial woes started to take a toll on Randhir and Babita’s relationship. By the mid-1980s, Randhir Kapoor was stamped as a ‘flop hero’. By that time, he had even started drinking more and didn’t take his acting seriously. And finally, in 1987, Babita decided to separate from Randhir. The news spread like wildfire and created an uproar in media.

The strong wife and mommy

By 1988, Babita was serious about completely separating from Randhir. She even asked him to leave her apartment and hence, Randhir went on to live with his parents and Babita stayed back with Karisma and Kareena in her apartment. Now, instead of moaning over her failed marriage, she remained strong for the next couple of years. Babita, then decided, to do something which no Kapoor bahu would ever dare to do. She started preparing Karisma Kapoor to be an actress against the Kapoor parampara. Babita’s resolute effort paid off and Karisma eventually landed in her first film, Prem Qaidi in 1991. In fact, it was because of her mommy’s efforts, that Kareena also bagged her debut film in 1999 with Refugee and the later with the Yash Raj banner.

You May Like: 26 Bollywood Celebrity Couples Who Had Low-Key Weddings Away From Media And Fans

All this while, when Babita was helping Karisma and Kareena in their careers, there was almost no contact between her and Randhir. However, in the early-2000s, they started with little contact and eventually in 2007, after 19 years of separation, the estranged life partners buried their differences and started off fresh again. It was a moment which both Karisma and Kareena had been waiting for long.

The ride is rough

Even though the year 2007 came with a hope of reconciliation, but 19 years of separation is a long time which had completely changed Randhir and Babita’s personalities and thinking towards life. They still live separately but the bitterness had definitely subsided between the two. They often meet each other, all thanks to their daughters.

Holidaying for their daughters

As of 2018, it's been 31 years since Randhir Kapoor and Babita have separated. But their personal differences have been put aside, and the two still-legally-married-hubby-wifey, go on holidays with their daughters. It's sweet, isn't it?

In a media interaction, at Babita's 70th birthday party, Randhir Kapoor revealed why the two haven't divorced each other. He was quoted as saying:

"Divorce for what? Why should we head for divorce? I don’t intend to get married again, and nor does she. She found that I was a terrible man who drank a lot and came home late, which was something she didn’t like. And I didn’t want to live the way she wanted, and she couldn’t accept me as I am, though it was a love marriage. So it’s okay. We had two lovely children to look after. She brought them up in the best way and they have excelled in their career. What else I could have asked for as a father?".

Next Read: Unknown Facts About 10 Popular Men From 'Kapoor' Khandaan And Their Gorgeous Wives

So, here we’re! This was Randhir Kapoor and Babita’s marital life for you! The takeaway from this story is definitely the fact that no matter what, one must always remain strong just like Babita who nurtured the careers of Karisma and Kareena despite all the odds. Isn’t this inspiring?