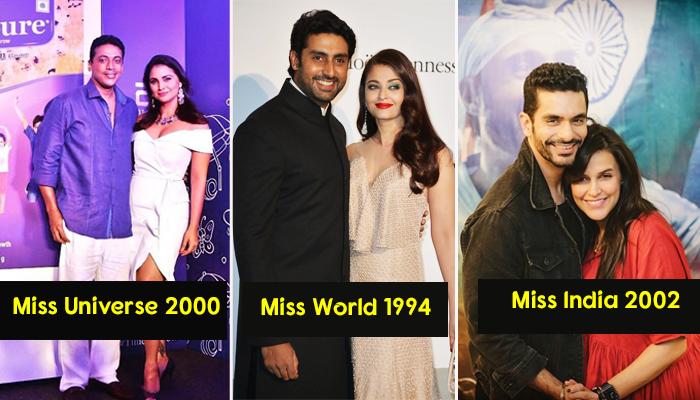 Beauty pageants in India and all across the world are not just a catapult towards fame, respect and money. They are also a direct ticket to the entertainment industry, and Bollywood has time and again proved that. Winners of Miss Universe, Miss World, Miss Earth and Miss India beauty pageants have often gotten into Bollywood and made a name for themselves.

A few names among these gorgeous beauties would be Aishwarya Rai, Lara Dutta, Neha Dhupia, and many others. In this article, we enlist for you the winners of such beauty pageants who have also been Bollywood actresses and also let you know who their husbands are. So, without further ado, here are the Bollywood actresses who have won Miss Universe, Miss World, Miss Earth and Miss India titles and their husbands:

Lara Dutta and Mahesh Bhupathi dated for a couple of years to know each other and finally got hitched on February 16, 2011, two days after the Valentine’s Day, in a simple civil ceremony. 4 days later, on February 20, 2011, the couple got married again in a Christian white wedding and hosted a glamorous party for their guests. A year after their wedding, on January 20, 2012, Lara Dutta and Mahesh Bhupathi became proud parents to their little munchkin, Saira Bhupathi.

Well, after her winning of the Miss World title in 1994, there was no looking back for Aishwarya Rai. Being one of the most gorgeous and talented actresses in Bollywood, naturally, she was linked-up with many leading men from the industry. But she found her man and soul-partner in Abhishek Bachchan. It was in 2006-2007 when they got spent a lot of time together during the shooting of Umrao Jaan, Guru and Dhoom 2. That’s when cupid struck between them and the two got married on April 20, 2007. Aishwarya Rai then became Aishwarya Rai Bachchan. Today, they are parents to their 6-year-old cutesy daughter, Aaradhya Bachchan.

She was 24 in 1997 when Diana Hayden bagged the title of Miss World. It was not until September 13, 2013, when she got married to a businessman, Collin Dick from Las Vegas, United States. On January 9, 2016, the couple was blessed with a baby girl, whom they named Arya. The news of Diana’s first pregnancy exploded like how on social media as she has given birth to her baby from an egg that she had frozen 8 years!

At the age of 20, Yukta Mookhey was crowned with the Miss World title in 1999. Since then, she has acted in a few Hindi and Tamil films. On November 02, 2008, at the age of 29, Yukta got married to Prince Tuli, a New York-based businessman and financial consultant. They have a son named, Ahhrein Tulli. In the year 2013, Yukta lodged an FIR against her husband for domestic violence and harassment and later for unnatural sex. In June 2014, the couple separated through a mutual divorce.

You May Like: 9 Bollywood And TV Celebs Who Were Physically Abused And Mentally Tortured By Their Partners

In the year 2000, Priyanka Chopra became Miss World and then she had a direct entry to Bollywood. She has acted in many Bollywood films since then. In 2017, Priyanka started dating American singer, Nick Jonas. On August 18, 2018, Priyanka Chopra and Nick Jonas got engaged in Mumbai at PeeCee’s residence. Reports are rife that the couple would get married by the end of 2018.

Don't Miss: Priyanka Chopra And Nick Jonas: Everything You Need To Know About Nick And Their Love Story

Miss India pageant has been happening annually since 1947 with gaps in its first decade. There have been more than 50 Miss India title holders since its inception and among the winners, not each one of them tried their hands In Bollywood. However, those who tried went on to become superstars and inspire many girls of the younger generation. Let’s take a look of Miss India winners who became actors and their husbands:

Swaroop Sampat won the Miss India title in the year 1979 when she was only 21. After getting catapulted to immense fame, she entered Bollywood and acted in many Hindi films, including Naram Garam. Even though she has acted in films, her true love remains theatre and that’s where she fell in love with Paresh Rawal. Although the two knew each other since their school days, the theatre eventually played cupid between them. They got married in 1987 and have two sons, Aniruddh and Aditya.

Popularly known for her relationship with Salman Khan, Sangeeta Bijlani won the Miss India title in 1980. She entered the Hindi film industry thereafter and acted in more than a dozen films. After her split up with Salman, Sangeeta found love in former Indian cricketer, Mohammed Azharuddin and on November 14, 1996, the two got married. However, 14 years later, in the year 2000, Sangeeta and Azhar got divorced due to the latter’s affair with badminton player, Jwala Gutta.

Indian actress, film producer and co-owner of the IPL team, Kolkata Knight Riders, Juhi Chawla won the Miss India title in 1984. She made her Bollywood debut four years later in 1988. Since then, Juhi has acted in more than 50 films. In 1995, Juhi married the industrialist, Jay Mehta who is the owner of The Mehta Group. They have two children, a daughter, Jhanvi and son, Arjun.

Celina Jaitley won the Miss India title in 2001. She entered Bollywood after her win and debuted in the year 2003. She has appeared in many blockbuster hits like No Entry, Golmaal Returns, among others. Celina married Peter Haag, a hotelier by profession on July 23, 2011, in Austria. The couple was blessed with twin boys in 2012 and then again in 2017, they were blessed with twins but one of the babies couldn’t see the light of the world for long and died due to a heart condition.

Bollywood actress and Roadies judge, Neha Dhupia was crowned with the title of Miss India in the year 2002. After getting close to marriage twice, and many link-ups, Neha Dhupia secretly got married to her long-time best friend, Angad Bedi on May 10, 2018. The couple released a joint statement which stated:

They are expecting their first child in November 2018.

So, here we are guys. These were the Bollywood actresses who have won Miss Universe, Miss World, Miss Earth and Miss India titles and their husbands. Who according to you is the most gorgeous couple? Do let us know in the comments section below.