Traditional Way Or Modern Route, Here's What These B-Town Divas Did To Their Surname After Marriage

Traditional Way Or Modern Route, Here's What These B-Town Divas Did To Their Surname After Marriage 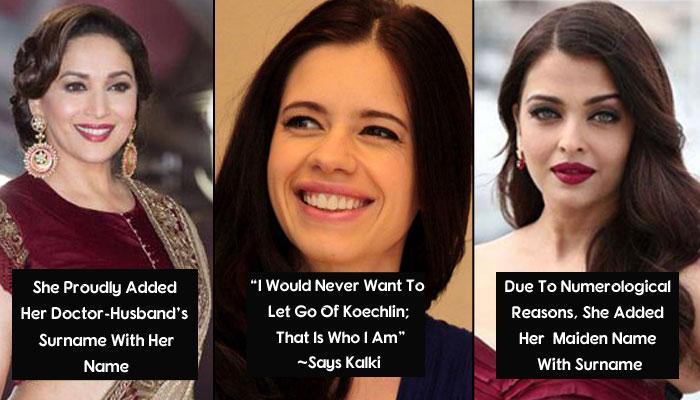 Weddings are the beginning of a new life for both the bride and the groom. It is a new feeling altogether. Since time immemorial, we have seen women, especially in our own country, India, leaving their maiden families and settling into their husband's home. And, they not only leave behind the people they grew up with or the house they lived in but also their name.

Changing one's name and surname is a very old part of Indian culture. It was so pressed into our minds, that we never really paid attention to this practice. But, nowadays, women have started paying close attention to the name-changing tradition. While some of them still like to change their surnames to that of their husband's after marriage, quite a number of them have begun to retain their maiden names even after they tie the knot.

Take a look at some of our Bollywood divas who, either kept their maiden surnames intact after their wedding or found another way out to follow this tradition.

Vidya Balan, who got married to Siddharth Roy Kapur, just before the release of her film Ghanchakkar, was in the spotlight for quite some time. The media was guessing and waiting with bated breath to see, how Vidya would use her name in the credits of the film.

However, Vidya decided to clarify things, as she said:

Now that's how you hold your ground. You go, Vidya!

Kalki Koechlin, whose marriage with Anurag Kashyap ended in a divorce, has always had strong views about the issues concerning women. After marriage, she did not even think of changing her surname as she did not want to give up on her family name. She said in an interview:

"I would never want to let go of Koechlin; that is who I am. Besides, I am the only child, and it is like my family legacy, and I can never give it up."

Don't Miss: 6 Bollywood Celebrities Who Got Married Not Once, Not Twice, But Thrice

Kiran Rao, who is known to be the ‘coolest’ celebrity wife in Bollywood, said in an interview that she does not want to be known as 'Mrs. Khan'. She said:

"Kiran Rao Khan, would sound very stylish I am sure. When you grow up, you hear your name and wish you had a superb name too. Kiran Rao is simple but I have never understood how people can change their names. I am comfortable being who I am and so is Aamir. He shares my point of view and understands me really well."

Kiran was lucky she got an understanding husband. But not all men understand the emotion of a girl wanting to hold on to her maiden name. That is who she is mate, her identity! What if we had to inverse the custom and make the man change his name to his wife's family name? A teeny tiny problem we got there, then!

Twinkle Khanna and Akshay Kumar tied the knot on January 7, 2001. Theirs was a hush-hush wedding affair in Mumbai at designer duo as well as friends, Abu Jani and Sandeep Khosla’s residence. It has been quite a long time that the couple is together and are still going strong. Twinkle is also one of those actresses who didn't change her name after getting hitched.

Recently, Twinkle gave an amazing reply to a random guy who tweeted:

"Why Twinkle Khanna u r Kumar got it?"

This was then beautifully replied by Twinkle:

"A lot of people bring this up,though not as stridently as this gentleman-Khanna it will always be #MarriedNotBranded"

She is one of the actresses who show more courage than any other actor. Other than retaining the surname, she continues to wear sindoor and bright coloured kanjeevaram sarees even after the death of her husband. This shows the true courage she portrays.

Rani Mukherjee is another actress who shows her bold side. She never clarified why she never changed her surname after marrying Aditya Chopra on April 21, 2014. She proudly uses her own surname.

Must Read: When They First Met, She Didn't Even Come Up To Him: Love Story Of Rani Mukerji And Aditya Chopra

Pooja Bhatt is yet another actress who never gave up on her surname. When asked, she said:

“Marriage in this present day and age is a redundant institution. I don’t want your sperm, money or flat so what do I need you for? I only want to be an equal with you, have your companionship and am happy to hold hands without tags. I don’t think there is permanence in marriage today."

Sadly, the couple is divorced too.

She is one actress who has shown another level of being bold. She was pregnant before marriage but she was never shy to hide this fact. Flaunting her baby bump like a boss, Konkana Sen never thought of changing her surname even after marrying Ranveer Shorey.

Check: 7 Bollywood Divas Who Were Pregnant Before They Got Married

Former Miss India, Juhi Chawla married Jay Mehta but didn’t use the surname of her husband. During that time, this concept was very much unique and hence, she wanted to adopt it.

You May Like: Alka Yagnik And Her Husband Are Living Separately For More Than 25 Years And They Are Still In Love

Talented and intelligent Indian actress married at a point when she was confident about getting married to John Makinson. After that, she retained her own surname without using her husband’s surname.

The ones who found a middle ground

Unlike the ones who retained their maiden names after marriage, there are a few who found a middle ground, and added their better halves' family names to theirs.

Immediately after her marriage to Abhishek, Aishwarya decided to adopt the Bachchan family name. She, in fact, signed her first autograph in Tirupati, as Aishwarya Bachchan. However, due to numerological reasons, she ended up adding her maiden name to it as well.

Before Kareena got married, there were rumours that she would convert to Islam, just like the other brides of the Pataudi family. However, she went ahead and had a lovely mixed-culture wedding. After her marriage, when her film Talaash was released, her name flashed as Kareena Kapoor in the credits. Everybody thought that Kareena had decided not to change her surname. But she surprised everybody by changing her name in the film Satyagraha to Kareena Kapoor Khan. Kareena made this decision independently before her wedding, and here is what she said:

"Saif doesn't want me to change anything about myself, including my name, after marriage. Post-marriage I will be Kareena Kapoor Khan. That means I have the privilege of having two of the most powerful surnames in Bollywood attached to my name."

That was indeed a very true and powerful statement by the actress.

After her marriage, Madhuri Dixit decided to give up her Bollywood career, and moved to Denver for nearly a decade. She also added her husband, Dr Shriram Nene’s surname to her name.

Read: Madhuri Left Bollywood At Peak Of Her Career And Married Dr Nene Because Of This Reason

Malaika and Arbaaz, who met at the shoot for a coffee commercial, immediately fell in love. After dating for nearly five years, the couple tied the knot and had a beautiful wedding. Post-marriage, Malaika decided to keep her maiden name as well as take up Arbaaz’s.

But things didn't work well between them and they parted ways legally too. Still, she has kept the surname in her name. Isn't that amazing?

But, what happens if there's a divorce?

This is a very legitimate query, and an eye-opening one too. Given the ‘tricky’ current relationship status of many married couples of B-town, most people wonder what happens to the name game when couples go separate ways.

Sussanne Khan who became Sussanne Roshan after marriage decided to retain the Roshan family name. After the separation, when she was asked the surname she was planning to use, she surprised everybody by saying:

But, we are guessing she said this to avoid publicity, as later she subtly dropped Roshan from her name, and started signing it as Sussanne Khan. Read More.

Now, come to think of it, what happens if a girl who has changed her name entirely to her husband's family name, gets divorced? What will be her identity? It will be so difficult for such a woman to get back in the feel of being addressed by her maiden name.

These were the decisions that some of the most-loved ladies from B-town made after their marriage. You should go ahead and make a choice that you think is best for you. But remember ladies, do not let anyone force you into anything. It's your name, your identity, and only you have the right to decide what it should be.