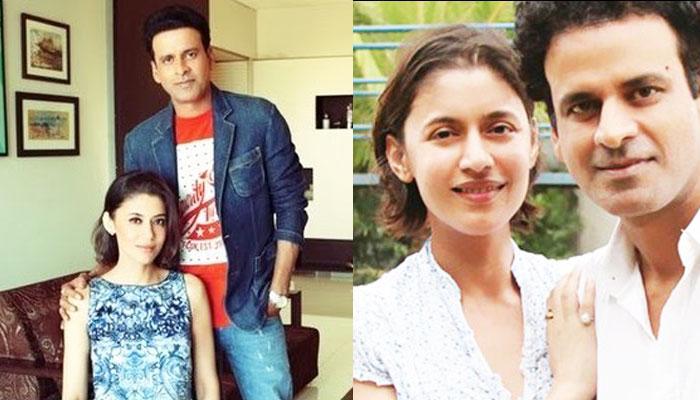 When you think of the phrase “relationship goals”, you know that the bond of actors Manoj Bajpayee and Shabana Raza aka Neha has hit the bull’s eye! Theirs is a special tale that is of partnership, perseverance and privacy. An adorable and extremely private love story that is said to have started in 1998, almost 20 years ago! These two indeed relationship goals personified!

Recommended Read: Rannvijay Singha Shares The First Ever Pic Of His 10-Month-Old Baby And She Is So Cute

National Award winner Manoj Bajpayee’s Bollywood story is of hard work, struggle, and the spirit of never giving up. Named after movie veteran Manoj Kumar, the actor was born in 1969 in a small village in Bihar called Belwa. Second, of five siblings, Manoj’s father was a farmer while his mother looked after the house and kids. That this young lad, who did his primary schooling in a hut-type school, would become one of the most illustrious actors in Bollywood is a story that is nothing short of fantastic. After completing secondary school, Manoj enrolled himself in Delhi University. He recalls:

“I did not even waste a day and from the first day at Ramjas College I started doing street theatre.”

Also Read: 10 TV Celeb Brides Mehendi And Sangeet Looks, That Every Bride-To-Be Can Take Inspiration From

However, life was not kind; he was rejected from the prestigious National School of Drama more than three times! Depressed, Manoj had suicidal thoughts. But his friend encouraged him to enrol in a workshop by theatre veteran Barry John, who spotted Manoj’s immense potential. Things took a better turn, and Manoj found recognition in Ram Gopal Varma’s cult classic Satya.

A Tale of Love and Loss

Not many know that Manoj was married when he first started out in Bollywood. It is said to have been an arranged marriage to a girl from his native Bihar. The actor, who is very private about his life, has not spoken much about his old life; so much so that even her name is not known. The marriage took place in the early 1990s, right when he was gaining the foothold in the industry. In 1994, Manoj was chosen by Shekhar Kapur to act in the acclaimed Bandit Queen. The same year, he moved to Bombay for better opportunities, which sadly would elude him for some more time. The pressure of financial constraints and the long-distance relationship (with his wife in New Delhi) was too much for the pair, who decided to part ways in 1995.

Don't Miss: Few Days Left For Wedding, Aashka-Brent Did Their Pre-Wedding Shoot In Paris And Looked Like Royals

The year 1998 was an eventful year for the Bajpayees. Not only was the much-acclaimed Satya released this year but also Vidhu Vinod Chopra’s romantic flick Kareeb starring Neha, a fresh-faced model, and Bobby Deol hit the silver screens and Manoj gained limelight. It was Neha’s first Bollywood movie, for which Chopra changed her name! The actress, born Shabana Raza, has since reverted to her old name. Moving on to the love story! This was also the momentous year when the actors finally met!

Suggested: These 7 Bollywood Divas Have Left Ageing Behind And Here Are Their Beauty Secrets

According to sources, the two first met at the premiere of Satya and soon became close friends. Shabana once said:

“Manoj and I have known each other for 10 years. I met him right after Kareeb was released. And since then we've been together. We're individuals and yet a compatible couple.”

Of Love and Happily Ever Afters

After many years of dating and getting to know each other, the couple decided to finalise the deal. The actors made it legal in 2006. From 1998 to 2006, they had indeed come a long, long way. Shabana said:

“Manoj and I understand each other well. We do not mix our professional and personal lives. We have a very healthy relationship.”

Don't Miss: Bollywood Ex-Wives Who Stayed Single After Divorce While Their Husbands Remarried

The couple was blessed with their first child, a daughter named Ava Nailah, in 2011. It doesn’t get better than finding the right companionship and forging a love of everlasting friendship. The relationship of Manoj and Shabana is based on the same strong bedrock. She said:

“Manoj and I don't need to socialise or go out to feel happy. We share long evenings of tea, silences and warm vibes right in our house. Nothing gives us more joy than to be together in our house."

This also explains the super-private and unpretentious nature of their relationship. Conversations over tea, guess the two don’t need much! Manoj explained the secret about his successful relationship and said:

“For us, between my wife and me, we believe conversation is the key. On a free day, we sit in the balcony or living area or wherever get our team and talk, talk and talk . . . The teacups come and go, and we continue our conversations. That's the thing about us.”

The two actors make an ideal pair, always complimenting each other on the part each has played in their beautiful lives.

Shabana once said, when asked about taking time off movies:

“There's always the space that I share with Manoj. Nothing can equal that.”

Manoj has also lauded her sacrifice to look after their young daughter, taking time off films:

“She has done a huge sacrifice for me and I owe it to her.”

Away from the cameras, the two are just normal, everyday people. Manoj insists:

“I too like to go back home after work. I don’t mind stopping to pick up groceries. On a holiday, Shabana and I visit malls to shop for our daughter. I enjoy all this.”

Don't Miss: 5 Bollywood Celebrities Who Chose To Tie The Knot With Their Childhood Sweethearts

Shabana too enjoys the happiness she’s found in partnership and matrimony, stating in many interviews that she is happy being Mrs Manoj Bajpayee:

“I was sitting at home and was happy with that because I loved being with Manoj all the time.”

A strong sense of camaraderie binds this beautiful couple, who take their privacy very seriously. This is such a refreshing change in the world of glitz and glamour. We hope that their relationship grows leaps and bounds over hot cups of chai and loving conversations.