For the South Indian style 'godh bharai' ceremony, Aishwarya Rai Bachchan and Abhishek Bachchan had twinned in shades of gold and olive green. Scroll down to see some unseen pics from the function.

Ever since a woman conceives, all she waits for is the time to say, ‘Goodbye tummy, hello mummy’! It is those nine months when everyone in your family and friends, pamper you to the fullest as once the baby arrives, everything starts revolving around him/her. And the most favourite tradition for every mommy-to-be is the baby shower (godh bharai). To mark the beginning of the motherhood journey, the godh bharai ceremony is hosted by the to-be mom’s mother or mother-in-law, wherein everyone prays for the good health of the mother and her baby. (Also Read: 10 Lehenga Looks Donned By Shloka Mehta Which Every Girl Wants To Steal From Her Wardrobe)

It was in 2011 when the Bachchan and Rai families had hosted godh bharai ceremonies for Aishwarya Rai Bachchan when she was expecting her first baby. After an array of pictures going viral from her sangeet function and wedding with Abhishek Bachchan, internet found a treasured trove from Aishwarya's baby shower ceremony. After the godh bharai ceremony hosted by her mother-in-law, Jaya Bachchan at their residence, Jalsa, Aishwarya’s mother, Brindya Rai too, had organised one for her expecting daughter in a Bandra hotel. 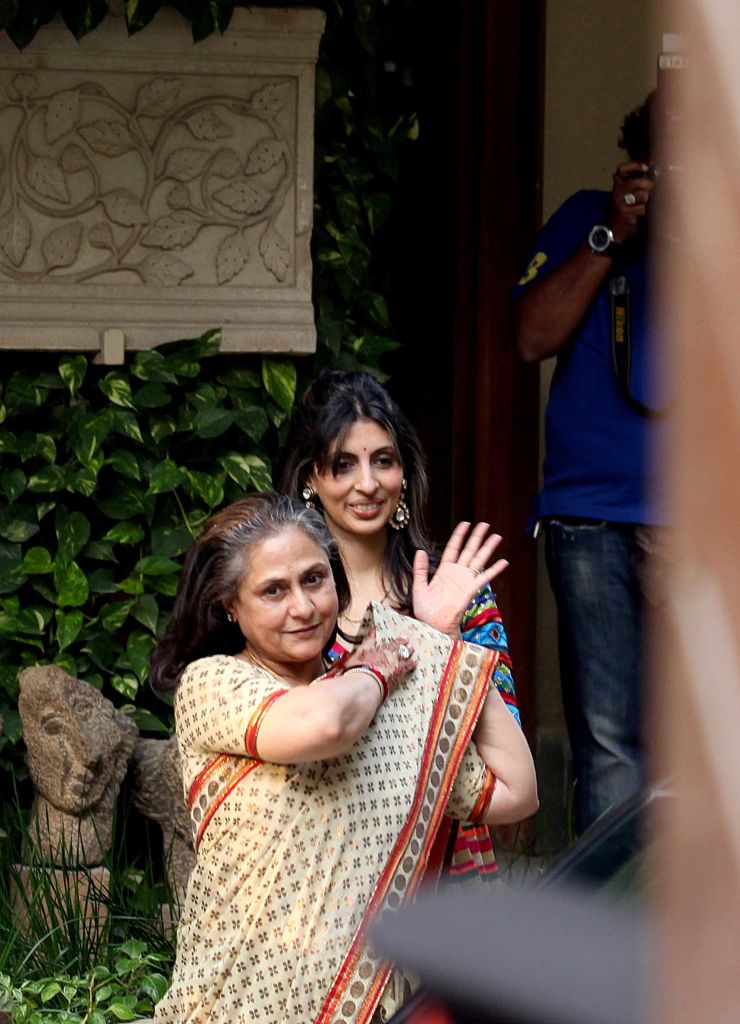 As per a Times of India report, a source close to Aishwarya Rai Bachchan had said, “The godh bharai by Ash’s mother was a very traditional Mangalorean one, known as baike, where the mother hosts the godh bharai for her daughter. It was a quiter one as the hotel had promised them privacy and there was no media madness. Ash’s parents got the venue late on Saturday night, and they were there till early in the morning supervising all the arrangements.”

Aishwarya Rai Bachchan's mother, Brindya Rai had personally taken care of the details and along the similar lines, the source had continued, “Everything was elegant and tasteful. There was a troupe from the south to play Mangalorean music, while white flowers, especially jasmine, and brass urlis (ritualistic Kerala lamps made of bell metal) were part of the decor. The flowers were traditional south Indian with a strong Kerala theme. The cuisine was also from the south and had dishes from every state in the south, ranging from velli aapam, malabar parathas, prawns, egg stew, allepy fish curry, roast urlakalang, yene kathrika, hyderabadi biryani, curd rice, steamed fish and paneer in banana leaf.” (Also Read: 12 Celebrity Divas Who Looked Like A Princess On Their Godh Bharai (Baby Shower)) Since it was a family affair, the presence of B-town celebrities was minimal. Elaborating on the guest list, the source had added, “Apart from the Bachchans and Kapoors, the only other Bollywood presence was that of Mani Ratnam, Sanjay Leela Bhansali and Ashutosh Gowariker. Shweta Nanda and her family were present, along with Abhishek and his friends, including Sikander and Kirron Kher, Shrishti Arya and Sonali Bendre-Behl. Shrishti’s husband Sameer and Sonali’s husband Goldie are out of India shooting for their next film and couldn’t attend. Ash wore a traditional pistachio green and gold Kanjeevaram saree given by her parents, while Abhishek wore a green and gold kurta-pajama. The couple looked colour coordinated and extremely happy.” 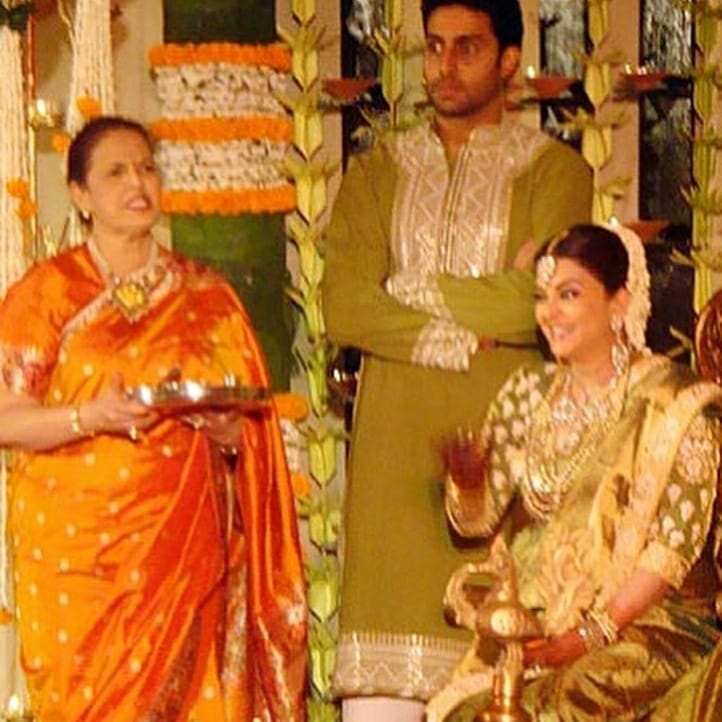 For the South Indian style baby shower ceremony, Aishwarya Rai Bachchan and Abhishek Bachchan had twinned in shades of gold and olive green, and the then-mommy-to-be had accessorised her regal saree with traditional jewellery. Aishwarya had epitomised gorgeousness in a golden and olive-green silk saree, which she had paired with 3/4 sleeves matching blouse, gold jewellery and gajra on her hair, tied in a bun. Abhishek had donned an olive-green coloured kurta and white pyjamas. 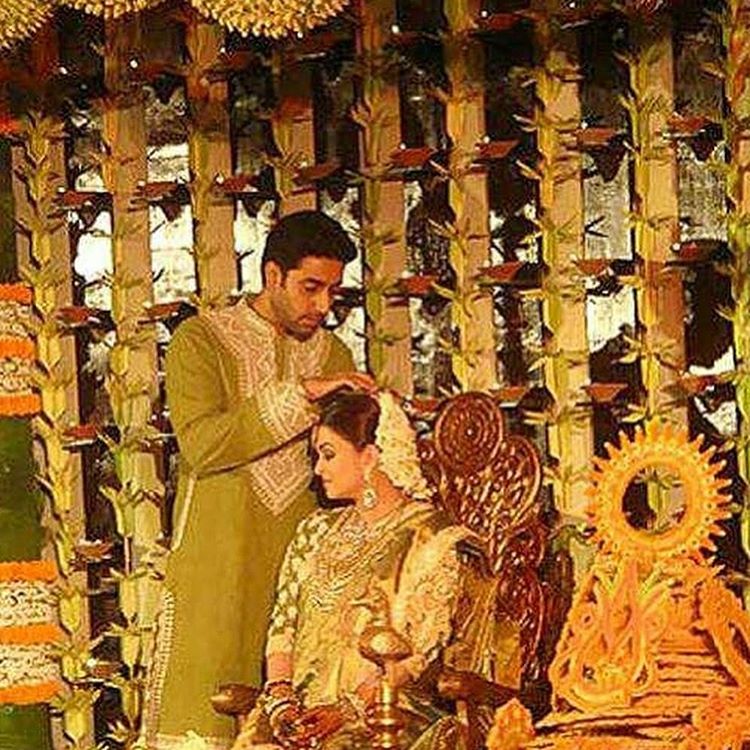 Aishwarya Rai Bachchan’s godh bharai ceremony was lit with diyas and was decorated with marigold and jasmine flowers, which are often taken as symbols of positivity and vitality. A picture in the series shows then-to-be grandparents, Amitabh Bachchan and Jaya Bachchan showering their daughter-in-law with gifts and blessings. And in another picture, Aishwarya’s mother could be seen performing aarti on her daughter with a thaali in her hand. The pregnancy glow on Aishwarya’s face and the happiness on her family’s faces is something that cannot be missed in her godh bharai ceremony! Aishwarya Rai Bachchan had given birth to her daughter, Aaradhya Bachchan at Seven Hills Hospital in Andheri on November 16, 2011. Announcing the arrival of their little angel, Big B had tweeted, "I am Dada to the cutest baby girl." Even the elated daddy, Abhishek Bachchan had posted on Twitter, "Thank you all for your prayers and good wishes. Both Aishwarya and the baby are doing great and taking some much-needed rest. And I’m trying my level best to get rid of this caffeine high and get some sleep too. Don’t think it’ll work. TOO EXCITED." (Also Read: Aishwarya Rai Bachchan And Aaradhya Bachchan's Mother-Daughter Moments Are Nothing But Pure Love) 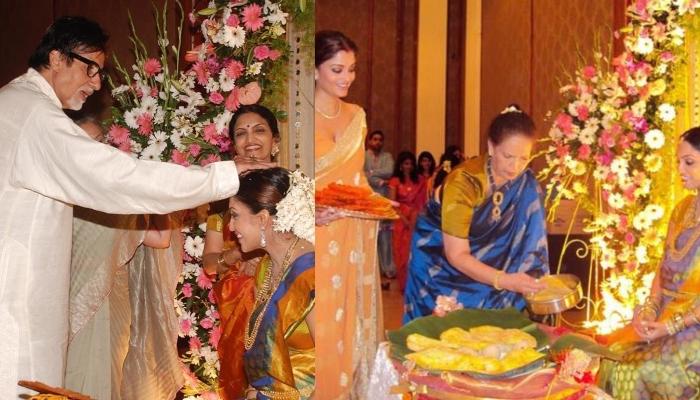 We have often heard celebrities talking about how their kids are exposed to the limelight and the constant media scrutiny on them, things are no different with celeb families. No matter how guarded celebs keep their families from the limelight, media and netizens love to know about them and that’s where