Floral, sequinned, hued, lacy- you name a kind of lehenga and the badi bahu of the Ambanis, Shloka Mehta can proudly tell you that she has it all in her kitty!

Yeh Mera Lehenga, Bada Hain Mehenga- is something that Shloka Mehta would definitely not be saying, but some things do not need to be told, right? Lehengas are one of the most beautiful Indian apparels that every girl wants to own and some boast of owning. Gone are the days when lehengas were worn specifically for weddings. But all thanks to the evolution of fashion, lehengas these days, can be customised and worn for any occasion. Floral, sequinned, hued, lacy- you name a kind of lehenga and the badi bahu of the Ambanis, Shloka Mehta can proudly tell you that she has it all in her kitty! 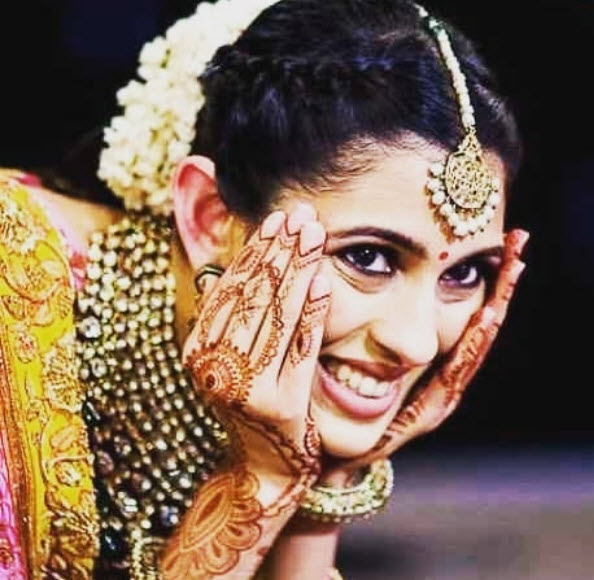 We bet you know all about the ‘oh-so-gorgeous’ Shloka Mehta, but we love giving you updates! Shloka Mehta, became 'Mrs Ambani' on March 09, 2019, by getting married to the dapper Akash Ambani in Mumbai. Theirs was a dreamy affair and even after 5 months of their wedded-bliss, we still can’t forgo from drooling over their pictures. Shloka has always been in the limelight for her terrific fashion sense, and more specifically portraying her lehenga looks so well. Admit it or not, at some point or the other, we had always yearned to have similar lehengas just like her! And to actually make you go thinking about it, we have culled out 10 lehenga looks sported by Shloka on various occasions that every girl would like to boast having in her wardrobe. So what are waiting for? Let’s begin with the peek-a-boo!

Recommended Read: This Bride Ditched The 'Dulhan Ka Lehenga' And Opted For Rose Gold Anarkali For Her Wedding Day 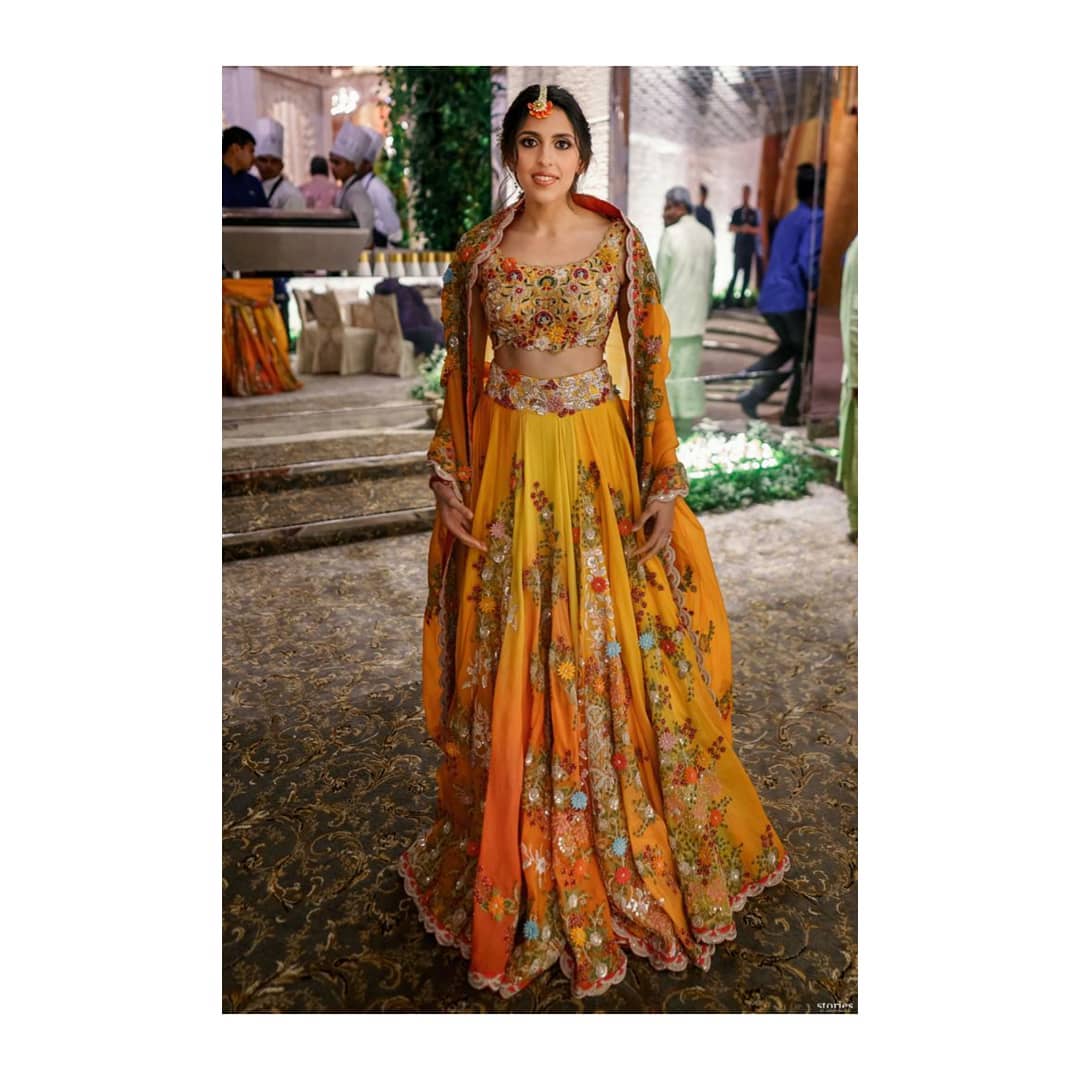 In this look, Shloka Mehta looks like the first ray of sunshine on a snowy mountain in an Anamika Khanna lehenga. This golden-yellow floral lehenga must have caught everybody’s fancy with its brightness. However, the highlight of the look is the way Shloka had carries the dupatta, by swinging it around her shoulder like a shrug. The complementing cute flower maang teeka and minimal makeup, made Shloka look every bit of royal! If you want to learn how to ace summer weddings, Shloka Mehta will give you major goals! Soon after her wedding with Akash Ambani, Shloka was seen acing the look of merging summer with traditional. Her frilled, beige-coloured lehenga had beautiful pink roses printed all over it. Shloka, as always, decided to go with as minimal makeup as possible and teamed her lehenga with floral-shaped, diamond jewellery and kept her hair loose. Tell us honestly, doesn’t she look like a fresh swirl of breeze?

#3. Pretty In Pink And Yellow 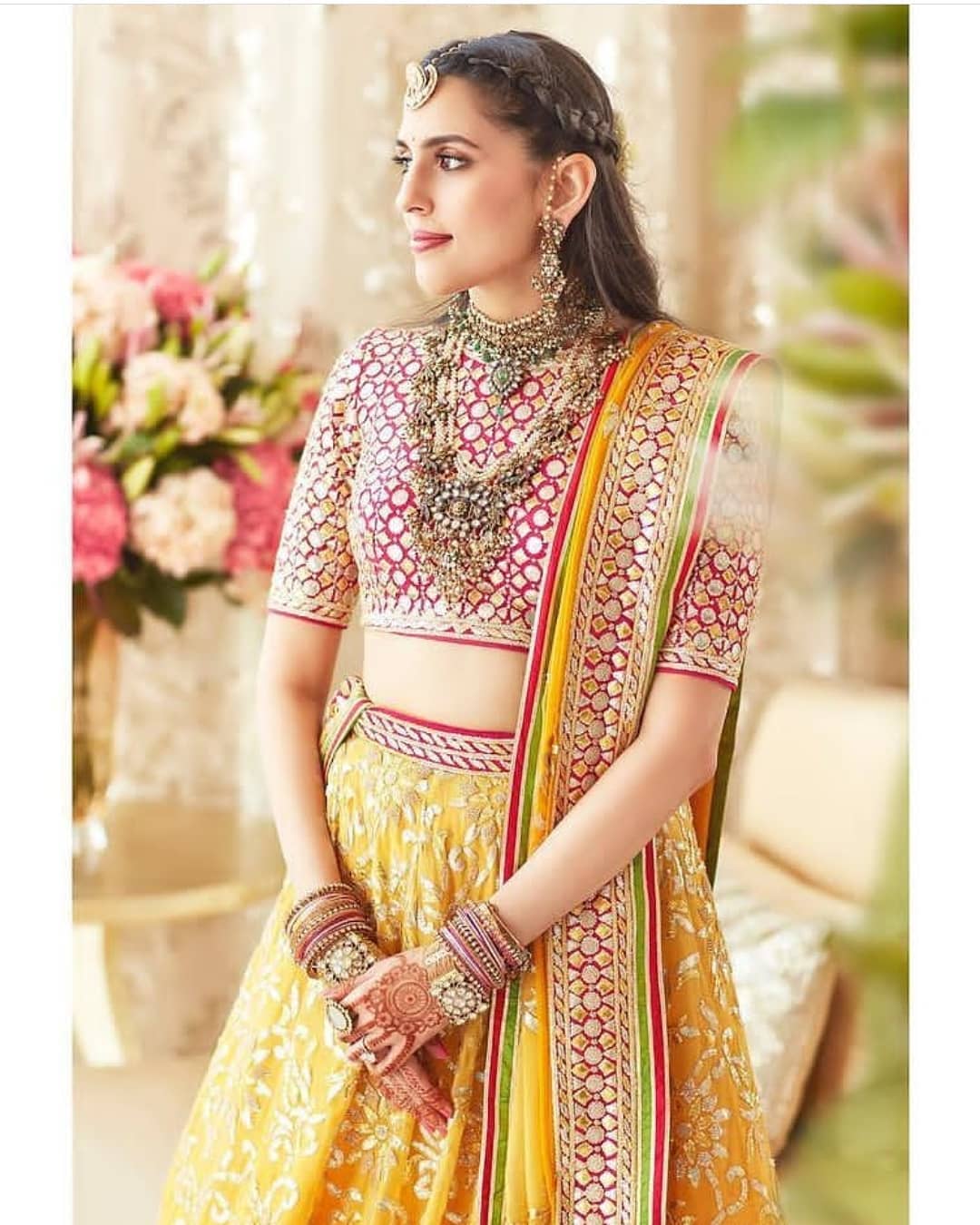 A good lehenga makes for a super-happy girl! And who can vouch for it better, other than the queen of lehengas herself, Shloka Mehta? In the aforementioned picture, Shloka yet again sparkled in shades of the brighter colours’ family, by donning a lehenga in pink and yellow. Two extremely bright colours, Shloka’s pink choli and yellow lehenga with a complementing pink waist border must have stolen the show of whichever bash she attended! And we totally loved how her neatly side-plated lehenga’s dupatta, had all the colours from her lehenga and choli, plus an additional green border. Shloka donned heavy jewellery along with this look, which included a long jadau haar and a choker of similar pattern and design. Her bangles and rings, Rajasthani borla maang teeka and traditional Gujarati earrings made for a diverse yet mesmerising look.

Must Read: Shloka Mehta: Everything You Need To Know About Akash Ambani's Wife And Ambanis' Bahu 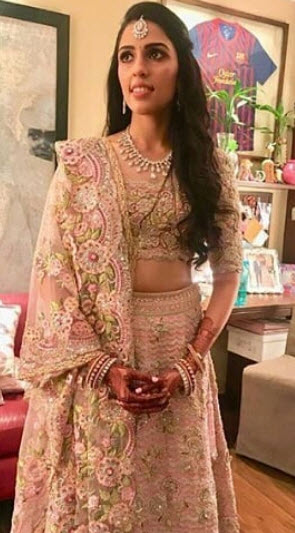 Soon after the world got to know last year that Akash Ambani is now all taken by his childhood sweetheart, Shloka Mehta, we were all prepared for a zillion celebrations! And as true as our prophecy turned out to be, Shloka had aced her lehenga looks, all better than the other in all of her wedding functions. For her pre-engagement bash, Shloka slew it big-time in a sterling grey-embroidered lehenga. Quite a floral fan by nature as it seems, Shloka’s dreamy lacy-sequinned lehenga had done all the trick! Along with her heavy kadhai work, floral lacy lehenga, Shloka complemented her apparel with a light diamond neckpiece, earrings and paisley designed maang teeka. Drooling over how astonishing Shloka Mehta looks in this cream and golden lehenga-choli, all we want to do is count how much money we have in our savings account, do a mental ‘ugh’ and save some more to buy this wonder garment! Shloka looks no less than a Goddess in this golden cut-work, kat-daana shimmery boat-neck choli, which does the entire trick. Another great way of keeping the dupatta in place, Shloka fixed it up with a beautiful jadau kamar-bandh, which had a brooch in the middle and contrasting green motifs dangling from the same. The two diamond necklaces, earrings and crescent moon-shaped maang teeka (with tiny danglers again), gave this look a hundred-and-one out of hundred! Shloka Mehta’s love for lehengas and bright colours is once again unleashed in this picture of hers, wherein, she gives us another reason as to why we denote her as the ‘Lehenga Queen’! Amazingly contradicting the background against which she poses, Shloka’s all-red lehenga-choli is a must-buy for all the newbie dulhans who have to steal the show at all the after-wedding parties at her in-laws. Her lehenga has golden zari work all over it and how we love the way she cleverly locks the chunni in place by fixing it with a diamond flowery kamar-bandh. She teamed her lehenga with a golden necklace and dewdrop-shaped maang teeka. 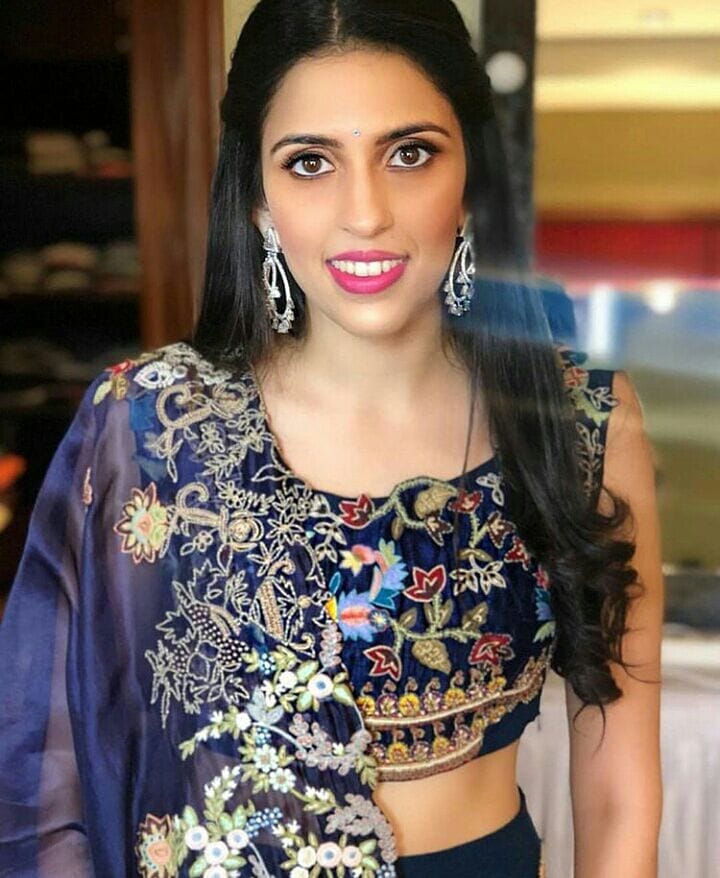 With what looks like it, Anamika Khanna is Shloka Mehta’s one of the most favourite lehenga designers! The designer has time and again, curated and created beautiful lehenga-cholis for the Ambani bahu. For her engagement mehendi noon held in 2018, Shloka looked beautiful in a royal blue sleeveless lehenga, which had multi-coloured zari and motif work done on it. With mid-parted hair, diamond danglers, pink lipstick, small bindi and mehendi-adorned hands, Shloka must have surely been the showstopper at her own bash! 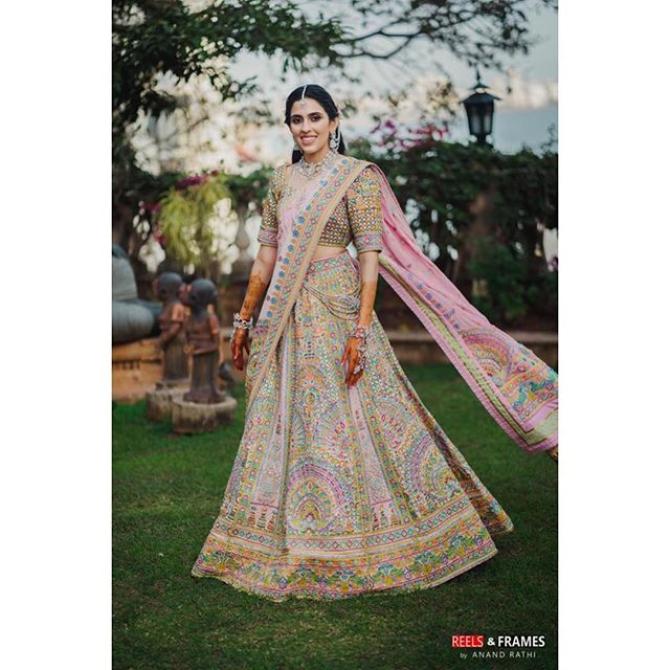 That is exactly how the designer duo, Abu Jani Sandeep Khosla had captioned the aforementioned picture of Shloka Mehta while posting her first-ever look from her wedding mehendi noon. As colourful and happy her entire look was based, Shloka had dazzled in a beautiful Abu Jani Sandeep Khosla couture. Her engagement multi-coloured lehenga was a pastel-hued hand-embroidered lehenga that she teamed up with minimal jewellery, which included hath phool, bangles, a layered necklace, earrings with cuffs and a simple maang teeka, all made of diamond! For Shloka Mehta and Akash Ambani’s sangeet ceremony, she had yet again stunned in a lavender lehenga. With intricate sequins all over lehenga and choli, she was a vision to us! While her pose with two hands flapped open as she shyly glanced at the ground went viral on the internet, it was Shloka’s rare choli design that made us want to do many woot woot’s for her! Shloka’s choli had boat-neck sleeves, with a tasselled V in the middle of it, which comprised of the entire blouse in toto! Extraordinary, isn’t it?

Next Read: This Bride Wore A Rani Pink Lehenga With The Longest Dupatta For Her Wedding We have mentioned almost all the beautiful lehenga looks of Shloka Mehta, but how can we miss the most vital look of hers, which was that of a bride? Post Shloka and Akash’s wedding, a few pictures from Shloka’s bridal photoshoot had emerged which was enough to blow us off our minds! Looking super-happy as a bride by donning herself in an all-red lehenga, Shloka’s pictures surely gave us major #BrideGoals! With very simple makeup and what looked like it, Shloka wanted to divulge maximum attention to her wedding lehenga and exquisite jewellery. The Ambani badi bahu went by the bridal colour of red and golden for her lehenga and teamed up her wedding ensemble with a heavy kundan necklace, maatha patti, nath and traditional earrings.

So peeps, here are 10 Shloka Mehta lehenga looks that might have already taken your breaths away! Be it if you are dulhan ki behen, bridesmaid at your friend’s wedding or attending any family function, Shloka has set herself as an exemplar of how to sport 'the lehenga look' just as right! Now this leaves you with some homework. Why don’t you tell us which lehenga look of Shloka did you like the most, where would you wear it and why do you think it’s the best? We await your answers!