Akash Ambani, the scion of Chairman and Managing Director of Reliance Industries Limited, Mukesh Ambani, married his teenage love, Shloka Mehta, Director of the Rosy Blue Foundation and co-founder of ConnectFor, in March 2019. More than a year later, in December 2020, Shloka and Akash embraced parenthood with the arrival of their son, Prithvi Ambani. Since then, the Ambani and Mehta families are on cloud nine.

The three consecutive years, 2018, 2019 and 2020 has been extremely special for the Ambani family as they had welcomed three members into their family. In 2018, Mukesh Ambani and Nita Ambani's daughter, Isha Ambani walked down the aisle with Anand Piramal, the following year, Akash Ambani exchanged wedding vows with Shloka Mehta. The year 2020 brought an adorable addition to the family as Akash and Shloka became parents to a baby boy.

Remembering Reliance Industries Limited founder, Dhirubhai Ambani, placing faith in next-gen leaders, Isha Ambani Piramal, Akash Ambani and Anant Ambani, and celebrating the arrival of Prithvi Ambani, the Ambani clan's virtual Annual General Meeting was a family affair. To begin the second virtual AGM, Mukesh Ambani paid respects to his father, late Dhirubhai Ambani. Akash and Isha then thanked the employees by calling them 'superheroes'. When Nita Ambani took the stage, she expressed how thrilled she was to welcome her first grandchild in December 2020.

During the one-hour-and-45-minute-long AGM, Mukesh Ambani was hopeful that Reliance will become a 'caring and empathetic corporate citizen' for the next-gen leaders, led by his scions, Isha Ambani Piramal, Akash Ambani and Anant Ambani, who will further enrich this precious legacy. Mukesh concluded the meeting by quoting his father, late Dhirubhai Ambani, "Challenge negative forces with hope, self-confidence and conviction, and ambition and initiative will always triumph."

Also Read: Akash Ambani And Shloka Mehta's Unseen Picture From Their School Days In DIAS Is A Priceless Memory

The newbie mom, Shloka Mehta made her first appearance post delivering her baby boy, Prithvi Ambani, at the virtual AGM of Reliance Industries Limited. Shloka opted for a floral off-white ethnic outfit with no jewellery and minimal make-up look. Mukesh and Akash kept it formal in a black and a blue suit and blazer, respectively. The Ambani women opted for pink and beige toned outfits for the virtual meeting. Mukesh and Nita's youngest son, Anant Ambani was missing from the meeting. 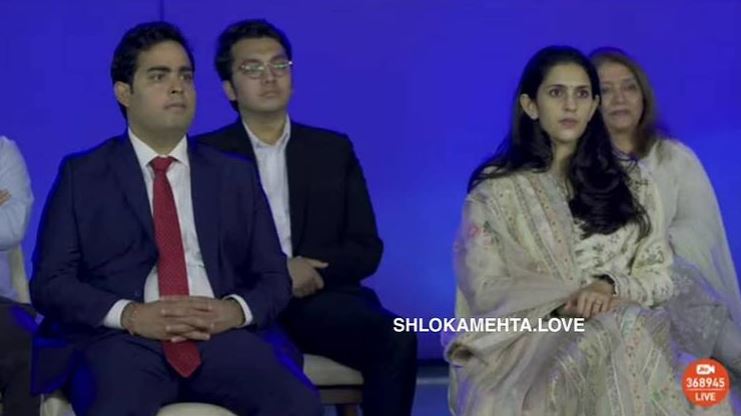 During the Reliance Family Day 2020, the Ambanis had greeted the new employees of Reliance Group and their families at a glittering ceremony in Jamnagar, Gujarat. Mukesh Ambani had welcomed Shloka Mehta and Anand Piramal into the family. He then went on to call his youngest son, Anant Ambani with Radhika Merchant on stage to be with the rest of the family members and soon the audience broke out with loud cheer as a gesture to welcome Radhika into the family.