With grandiose decor, flashy performances and flamboyant guest list, Bollywood and TV celebs marriages are the most-talked-about and exuberant weddings of the town. One of it was witnessed on April 21, 2018, when the who’s who of the industry came together for the wedding reception of Sandeep Khosla’s niece, Saudamini Mattu. Saudamini is also the CEO of the ace designer duo and pioneers of India's high fashion industry, Abu Jani and Sandeep Khosla’s label store, Abu Jani Sandeep Khosla. (Also Read: Milind Soman And Ankita Konwar Dancing To 'Ban Jaa Tu Meri Rani' On Haldi Ceremony)

Saudamini Mattu tied the knot with the Delhi-based architect, Siddharth Bhandari and they hosted a wedding reception on April 21, 2018, which was held in Juhu, for their friends from the industry. Amitabh Bachchan and Jaya Bachchan arrived with their daughter Shweta Bachchan Nanda and daughter-in-law Aishwarya Rai Bachchan, Twinkle Khanna with her mother Dimple Kapadia, Neetu Kapoor, Tabu, Karan Johar, Sara Ali Khan, Sonali Bendre along with her husband Goldie Behl, Bhumi Pednekar, Asha Parekh, Chunky Pandey's wife Bhavana Pandey turned up with Sanjay Kapoor and his wife Maheep Kapoor, Sonam Kapoor along with mother Sunita Kapoor and sister Rhea Kapoor were snapped at the celebrations.

From Tina Munim To Isha Ambani, Abu Jani Sandeep-Khosla Have Decked Up Countless Brides In 35 Yrs 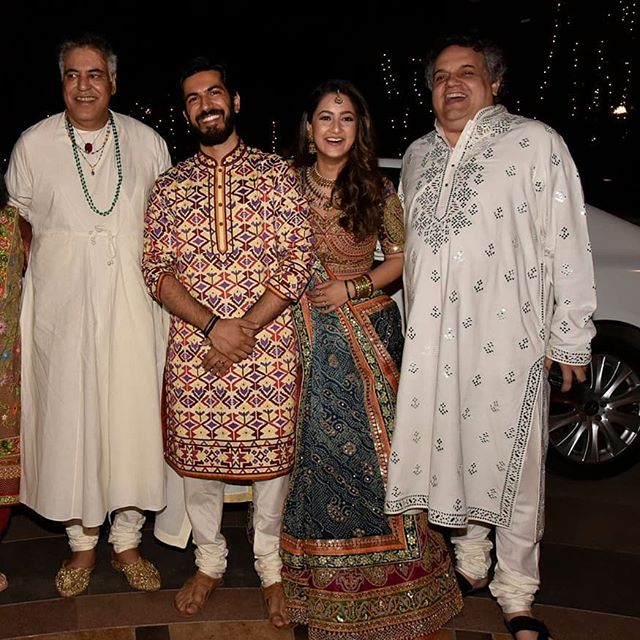 B-towners made sure that Saudamini’s wedding reception was a starry affair. And with their spellbinding dance performances and glamorous avatars, they all added their special tadka to the celebrations! As per a Bombay Times report, a guest was quoted as saying, “There was exquisite floral decoration. The menu was a blend of Punjabi and Mughlai dishes, prepared by chefs flown in from Delhi. There was a string of impromptu dance performances by Karan, Sonam, Sara and Shweta. Jaya Bachchan also took to the dance floor for a little jig. Neetu and Dimple shook a leg, too. Karan danced to 'Radha' from 'Student Of The Year', which was applauded by one and all. Sandeep Khosla 'ne toh uski nazar bhi utaari'! Shweta danced to the recent hit 'Pallo Latke' from 'Shaadi Mein Zaroor Aana', but it was Sara’s moves to 'Saat Samundar Paar' from 'Vishwatma' that had everyone whistling and grooving along.” (Also Read: Karan Johar Is Shaking His Leg To This Song On Sonam Kapoor’s Wedding) 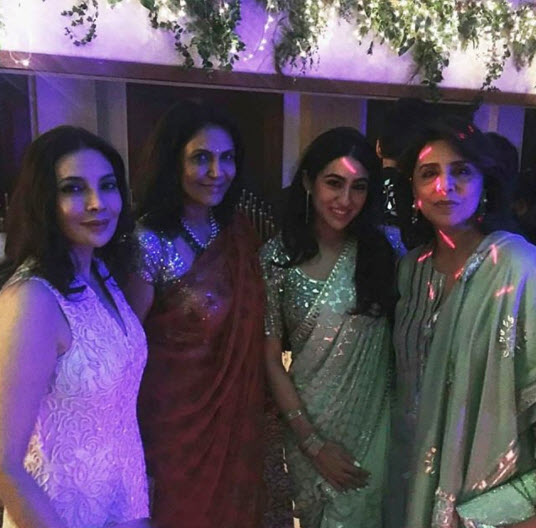 As everyone was at their sartorial best, let us take you to ‘who wore what’ at Saudamini Mattu’s wedding reception. While the bride, Saudamini Mattu wore a stunning handmade multi-coloured lehenga with traditional jewellery and minimal make-up, her groom Siddharth complemented her well in a colour-coordinated kurta pyjama. Saudamini and Siddharth were wearing Abu Jani Sandeep Khosla for their wedding reception. (Also Read: Sonam Decided To Wear This Famous Designer On Her Wedding, And No, It's Not Sabyasachi) 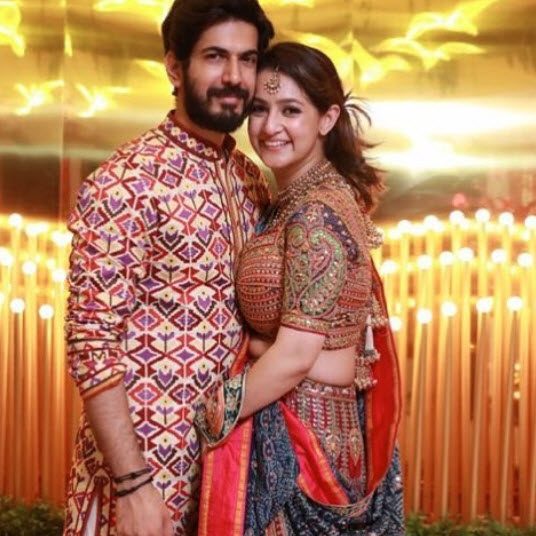 102 Not Out star Amitabh Bachchan sported a green long kurta with golden embroidery, which he paired with the golden pyjamas and black mojris that too had golden prints. Jaya Bachchan was seen in a light yellow-coloured saree and a matching blouse with silver mirror-work all over the border. Their daughter-in-law Aishwarya Rai Bachchan opted for Rohit Bal ensemble and it was described by the designer himself as, “Aishwarya Rai Bachchan looks like a dream in our matka silk flared jacket with zarodoz embroidery of the iconic Bal lotus & swan motifs inspired by the Russian czars.” And Shweta Bachchan Nanda kept it simple with a simple ivory saree which she accessorised with a layered emerald necklace. (Also Read: Amitabh Bachchan Twining With Abhishek Bachchan At A Family Wedding Is Giving Father-Son Goals) 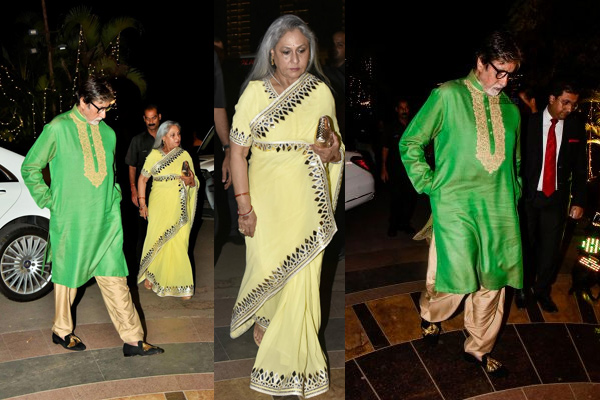 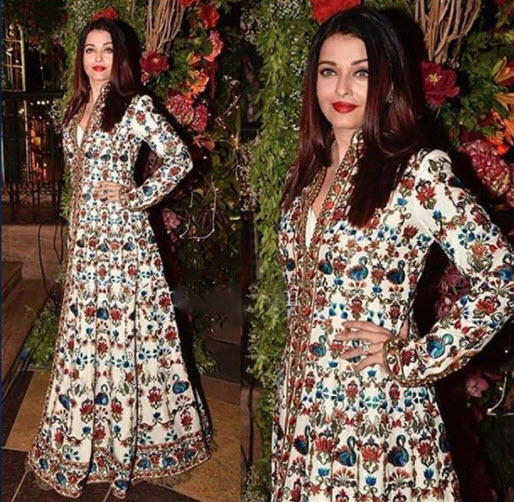 Twinkle Khanna kept her look elegant with an ivory and lavender kurta-palazzo set. Manmarziyan actress Bhumi Pednekar was at the top of her style game in Abu Jani Sandeep Khosla’s generous silver paillette patterns on the canvas of sky blue summer lehenga. She complemented her look with a pair of statement earrings and nude tones for her make-up. Alleged soon-to-be-bride, Sonam Kapoor stepped out in a heavily silver embellished black lehenga and amped up her look with a maang teeka and cocktail earrings. Saif Ali Khan and his first wife, Amrita Singh’s daughter, Sara Ali Khan stole everyone’s heart in an elegant ivory-coloured saree with an embellished border and blouse. Keeping her look ethnic, she aced her look with multiple bangles, spherical tote and dewy make-up. Bollywood’s ace director, Karan Johar wore a black sherwani with golden leaves printed on its one side along with matching pyjamas and shoes. (Also Read: 24 Bollywood Divas From All The Eras And Their Ravishing Real-Life Bridal Looks) 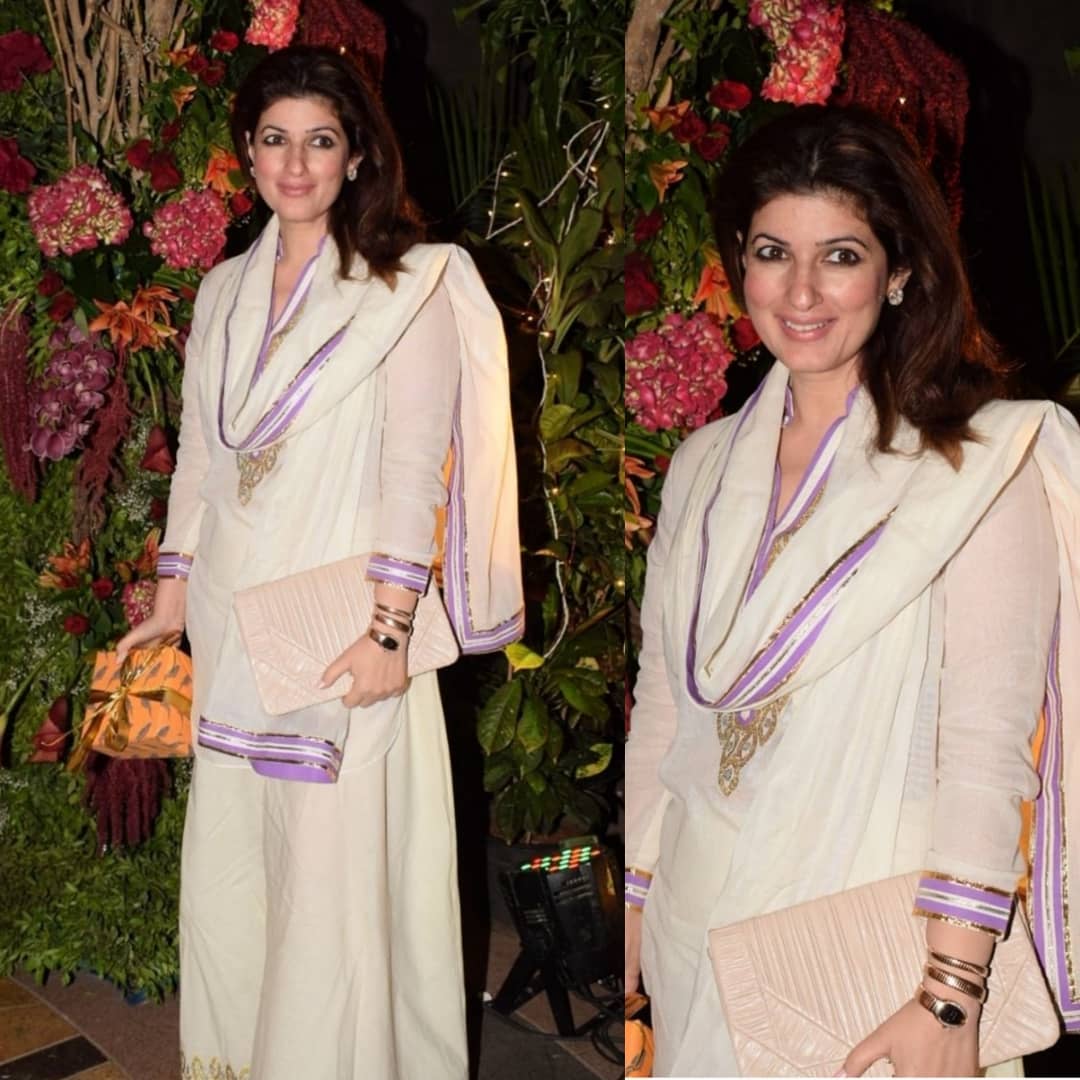 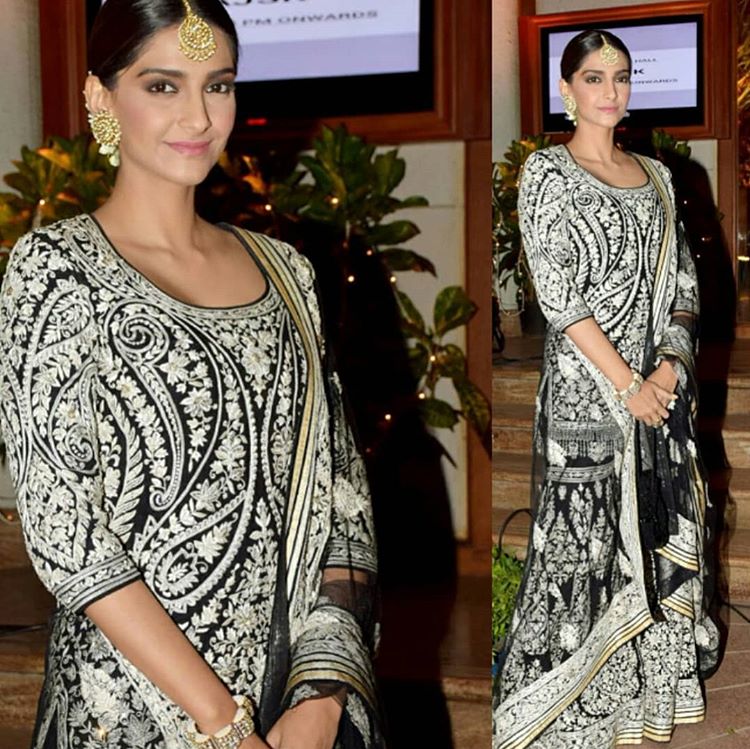 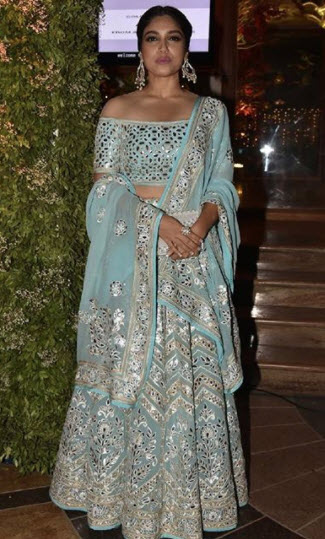 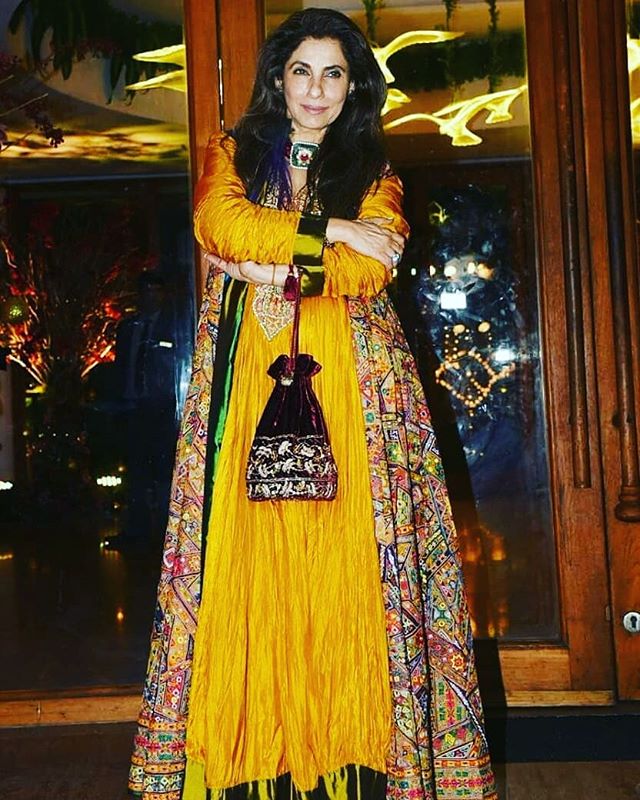 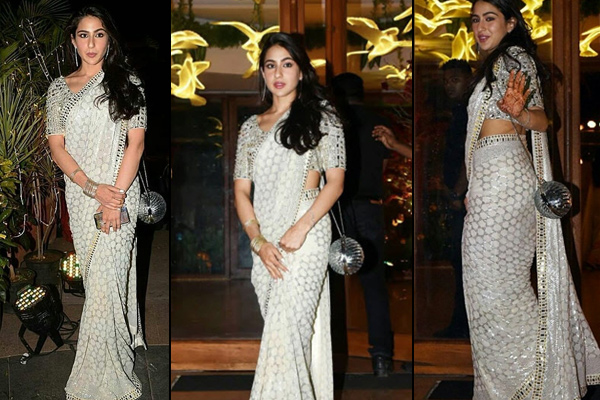 Besides their exquisite outfits and glamorous avatars, what caught everyone’s attention are the impromptu dances moves of Bollywood celebrities. Sonam Kapoor, Abu Jani, Sara Ali Khan, Shweta Bachchan, Jaya Bachchan and Karan Johar were the ones who shook the legs at Saudamini Mattu’s wedding reception and set the dance floor on fire. The superstar in the making, Sara Ali Khan showed off her amazing dance moves on the classic yesteryear song, Saat Samundar Paar. Soon-to-be-bride Sonam Kapoor shook her legs with the designer Abu Jani on the title track of her song, Prem Ratan Dhan Paayo. Shweta proved her Bachchan genes by shaking legs on the peppy song, Pallo Latke from the film Shaadi Mein Zaroor Aana. She was also joined by her mother, Jaya Bachchan. Karan Johar proved it again that he is the master of all arts when he performed on the song, Radha from his film, Student of the Year.

Congratulations to the newly-wedded couple, Saudamini Mattu and Siddharth Bhandari. Their wedding reception was indeed an unforgettable evening!

Next Read: Milind Soman And Ankita Konwar Are Now An Officially Married Couple [Pictures Inside]