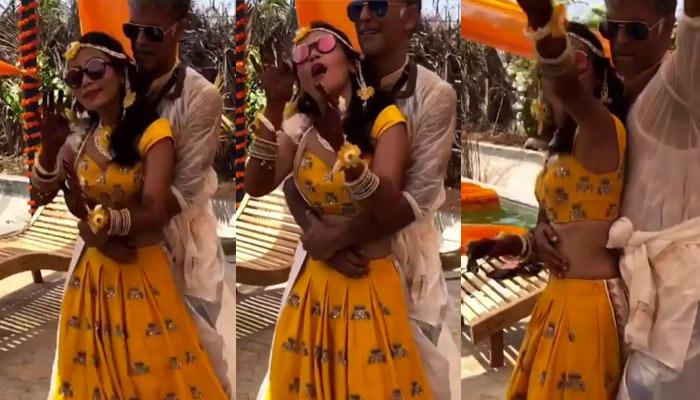 Gone are the days when marriage was about crying and feeling sad to leave your home and loved ones. It is true that we still do feel sad to leave the comforts of our home, but what we more look forward to is a whole new world of new people in our surroundings, love and responsibilities. Isn’t it?

While people are going crazy over the salt-and-peppered hottie’s marriage (including some having major heartbreaks!), what caught our frenzy is the never-seen-ever avatar of Milind Soman. Scroll through this link and you will see two videos of the adorable couple dancing on their haldi to Guru Randhawa’s superhit song, Ban Jaa Tu Meri Rani and one on the beats of dholak:

Feel like getting married already after watching this video? This is what Milind Soman has done to us and will continue doing! (Don't Miss: Coincidence? Ex-Couple Jennifer-Karan Wear Colour-Coordinated Outfits For Dada Saheb Phalke Awards) 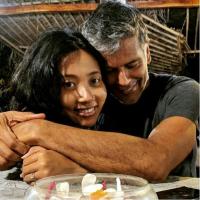 Apart from the video, what also catches our fancy is the beautiful floral jewellery that the ravishing to-be wife is sporting. Take a look at her floral ring, matha-patti, earring and bangles. While Ankita looked mesmerising in a yellow lehenga with super-simple bare minimum embroidery which complemented her looks, Milind looked every bit of dapper in this off-white dhoti-kurta.

While reports suggest that the duo were planning their wedding internally, but Milind and Ankita were tight-lipped about their marriage from the media. A source close to the couple told TOI, “Only close friends and family know about the wedding. The couple did not want to make their wedding a huge affair”. (You May Also Like: Karan Johar Is Shaking His Leg To This Song On Sonam Kapoor’s Wedding) 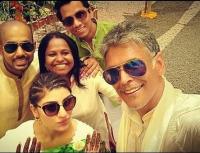 Reports also had it that the Bajirao Mastani actor also paid a visit to Ankita’s hometown in Guwahati this year in February. To finalise their marriage, probably? The couple also celebrated the completion of their fourth anniversary this year in March. 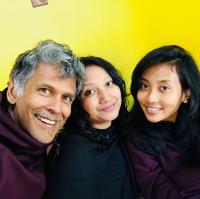 This couple not only gives us relationship goals but major fitness goals as well. In spite of a tight-packed wedding schedule, the couple does not falter in their exercise regime and continued to do so even at their wedding venue. See pic:

Milind was earlier married to his French co-star of the film Valley Of Flowers, Mylene Jampanoi. They got separated in 2009. (Read: A Look Back At Sanjay Dutt And Madhuri Dixit's Alleged Love Affair That Made Headlines In 90)

Milind Soman is best-known for his music video with Alisha Chinoy, Made In India. He has been an integral part in films such as 16 December, Say Salaam India, Rules: Pyaar Ka Superhit Formula, Bhram, Bheja Fry and Bajirao Mastani. He also co-judged the recently-concluded show India's Next Top Model which aired on MTV. Ankita, on the other hand is an air hostess by profession.

Next Read:  Shahid And Mira Take Misha's Help To Confirm Arrival Of Their Second Child Soon