As Sonam Kapoor Dances In A Wedding Reception, Jaya Bachchan Protects Her From Evil-Eye

As Sonam Kapoor Dances In A Wedding Reception, Jaya Bachchan Protects Her From Evil-Eye 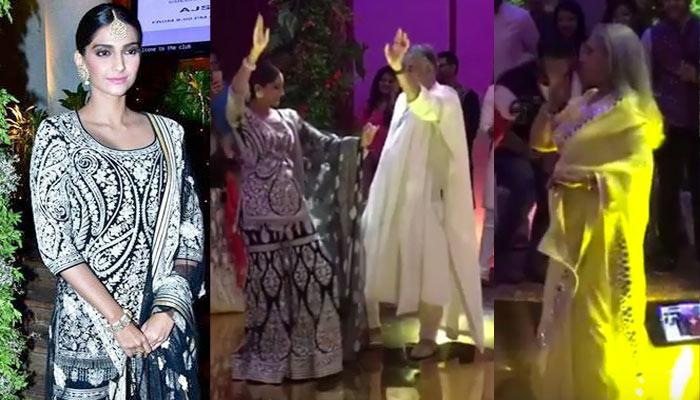 Bollywood celebrities always make the loudest buzz wherever they go. And since yesterday, every Bollywood buff and fan has been talking about Saudamini Mattu’s wedding reception. To give you a context, Saudamini is the niece of ace designer, Sandeep Khosla. Sandeep is famous for his collaboration with Abu Jani and being the face of the high-end brand, Abu Jani Sandeep Khosla (AJSK). Saudamini Mattu is currently the CEO of AJSK. (Also Read: Milind Soman And Ankita Konwar Are Now An Officially Married Couple [Pictures Inside]) Name any guest from the Bollywood fraternity and you would have found them rocking the dance floor yesterday. And two such dance performances which are sweeping the netizens by their feet is of Sonam Kapoor and Jaya Bachchan.

Sonam Kapoor who attended the last night’s glamorous affair with mom, Sunita Kapoor and sister, Rhea Kapoor, looked ravishing in a black and golden sharara. She teamed her gorgeous attire up with a mang tikka and a gajra around her bun. She grooved to the titular song of her own film, Prem Ratan Dhan Payo. Check out her dance:

The last part of Sonam’s dance performance which is attracting everybody on social media was obviously, Jaya Bachchan and Shweta Bachchan’s attempt to rescue Sonam from the evil eye! Funny, isn’t it?

Even the mother-daughter duo, Jaya and Shweta couldn’t control their feet and jumped onto the dance floor. They dance to Pallo Latke along with, Abu Jani. Take a look:

Every celebrity’s looks and dance moves have surfaced on social media and have already gone viral. In fact, with their looks, the actress are surely setting major fashion goals and all the brides-to-be could take a cue from them for their own reception looks. 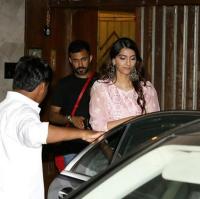 Apart from her looks and dance, Sonam is also in the news because of her wedding news. Reportedly, Soman Kapoor and her boyfriend, Anand Ahuja will get married on May 07, 2018 in Mumbai itself. The preparations for the same are in full swing. A source recently revealed to a media house, “Rehearsals have kicked off at Anil Kapoor’s Juhu bungalow. The doting dad and mom Sunita will be putting together a special act for the bride-to be at the sangeet. Sonam’s cousins and extended family have joined in as well for the pre-wedding ceremony. They will perform on her hit songs like the Veere… title track, “Abhi Toh Party Shuru Hui Hai” from the Fawad Khan co-starrer Khoobsurat, the Prem Ratan Dhan Payo title track, and “Dheere Dheere” from her music video with Hrithik Roshan, among others, besides other popular wedding song.”

After this report, and Farah Khan’s accidental confirmation of Sonam’s wedding, Twitter just went crazy and couldn’t help but rejoice over the news.

Coming back to Sonam and Jaya Bachchan’s latkas and jhatkas, do let us know in the comments section below as to what you felt about their dance moves.

Next Read: Shahid Kapoor On Mira's Second Pregnancy: 'It Was A Spontaneous Decision And It Just Happened.'