Sanjay Dutt had revealed in many interviews that Maanayata Dutt is not his 'better half' but his 'best half'. Checkout the interesting juxtaposition that he draws between his mom, Nargis and wife.

You will find many people in life who will be there to be with you only when life is on a sunny-side-up. But those who will be there for you to help bend that downward curve on your lips to an upward one, are extremely rare. And in case you manage to stumble upon almost ‘extinct creatures’ like them, hold on to them and shout out loud, “You are a keeper!” Well, we aren’t sure if Sanjay Dutt has done the same for his beautiful wife, Maanayata Dutt, but we surely know that he never fails to shout from the rooftops about how lucky he is upon having her, all the time!

Sanjay Dutt himself had revealed in many interviews that Maanayata Dutt is not his ‘better half’ but his 'best half’ and we don’t have even an ounce of doubt! Time and again, in interviews, chat shows and through his social media posts, Sanjay has shared that Maanayata has been a huge pillar of strength for managing his finances, house, kids, external turbulences when he was serving his jail term. And look what happens when you have someone to support you all throughout! You emerge victorious out of any crisis!

Also Read: When Sunil Dutt Refused Doctor's Advise To Remove Nargis Dutt From Life Support When She Was In Coma In an interview with the Mumbai Mirror in 2019, Sanjay Dutt and Maanayata Dutt got all candid about his mother and father, Nargis Dutt and Sunil Dutt, kids, Shahraan and Iqra Dutt and their latest venture, their self-owned production house, Sanjay Dutt Productions Private Limited. Maanayata replied, “I had a production company, but he didn’t keep making films to set Sanju up as a star. He was a self-made man, so is my husband. But Sanju is among the few actors who will always wear his boots. Since acting is age-bound, we had to figure out how to take his career a step up. Producing films is another way of entertaining.” To which, Sanjay added, “I know that both my parents will be very happy that my production company is taking off.”

Maanayata Dutt also shared if Sanjay Dutt’s production house is something that they would want to pass onto their kids, Shahraan and Iqra Dutt, “I don’t believe materialistic things should be passed on, they should be earned. I could build an empire for my children, but if they can’t keep it together or expand it, they might lose it. What we can give them are education and values.” 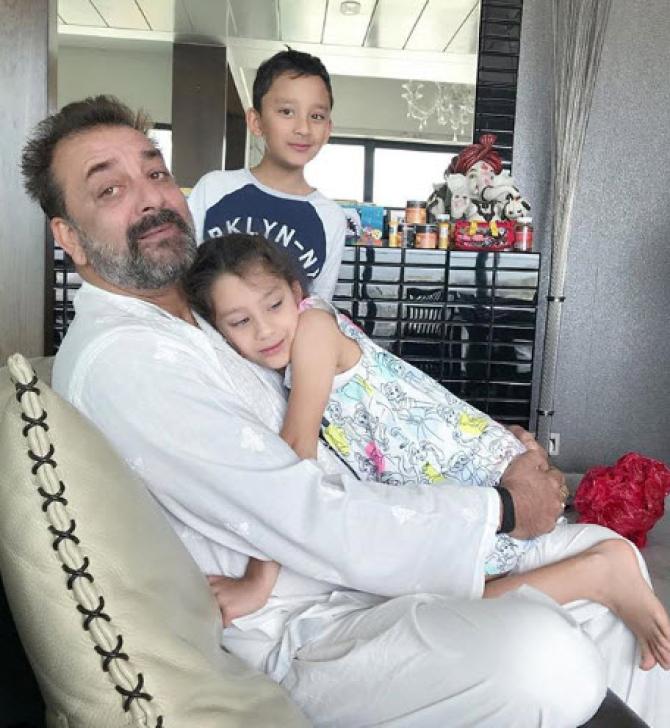 Sanjay Dutt and Maanayata Dutt’s twins are 9-years-old. Born in a filmy family, the star wife answered if any of their kids already show any interest in filmmaking. She had stated, “My daughter, who will turn nine soon, is an artist. From her grade—two divisions of 24 kids combined—her paintings get selected every year for the school magazine. I’m planning an exhibition of her canvases soon. My son is more interested in sports—cricket, football and Taekwondo.”

Don't Miss: Unseen Picture Of Nargis Dutt Dressed In Her Wedding Saree For Her Last Anniversary With Sunil Dutt

Maanayata Dutt is often regarded as an exemplar of a perfect homemaker. Given that now her interest has shifted towards production too, Maanayata revealed if priorities in her life are changing. She shared, “You have to evolve with time, growth lies in change. The kids are busy with school and an activity class every day, be it skating or swimming. They don’t have much time for us and as they grow older, they will get busier. So, it is better that I, too, get busy with something else. This company is like my baby too.” 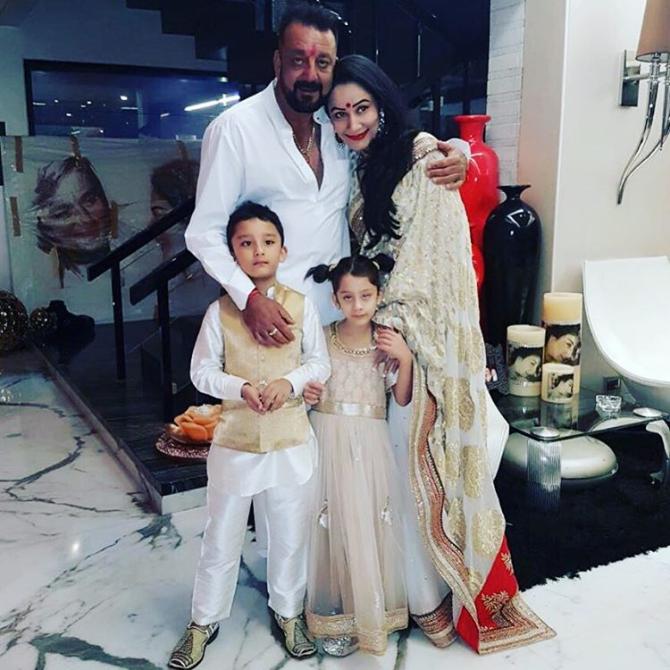 Sanjay Dutt’s biopic shed a significant amount of light on his personal life. It is from the very film that we had learnt that Sanjay first took to drugs when he had found out about his mother’s illness, given that she has always been the centre of his universe and vice versa. Revealing if it is the same for his wife, Maanayata and his kids, Sanju baba revealed, “Yeah, they are alike in the way they conduct themselves. Mom was louder than Maanayata but she’s the same with our kids.”

Sanjay Dutt, praising his wife, Maanayata Dutt about how she had churned their ‘house’ into a ‘home’, said, “I’m proud and fortunate to have a wife like her. Her focus has always been home, husband, kids and her work. I’ve never interfered in her trading, knowing she has business acumen. After my father passed away, Maanayata has been my support system. She never let me fall, she was always there to pick me up.” To this, the star wife added, “For all those who say I am his anchor, I say, he is the sail I set up to protect myself from storms. He’s always stood strong for the kids and me. Even when he was inside, he was worried for us.” 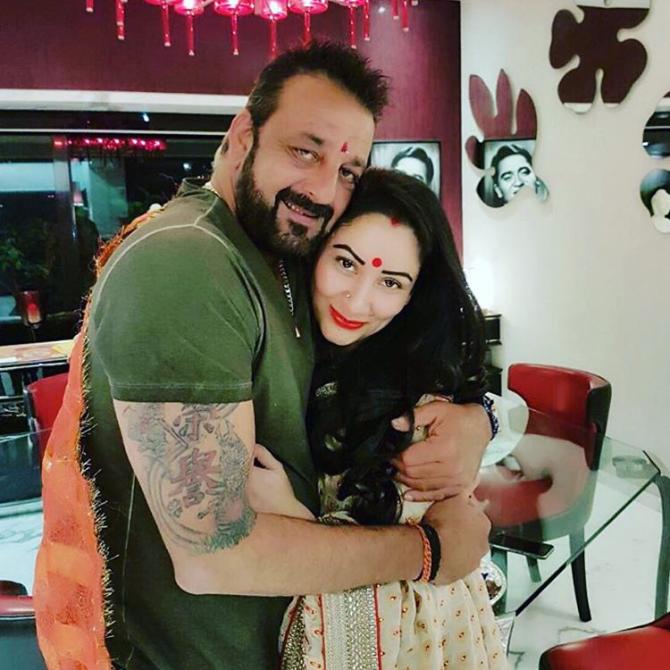 Maanayata Dutt then revealed if she has seen any change coming in her hubby, Sanjay Dutt in the last few years. She quipped, “Earlier, he used to be disturbed, his father didn’t live to hear the court say that he was not a terrorist and acquit him from TADA charges. That had tarnished the family name and bothered him for years.” Sanjay too, added, “The dark clouds are gone, I am finally at peace. Like Chintu sir, I am happiest on a film set and now, I can do the work I want to do. Films like Bhuj, which is about the 1971 Indo-Pak war during which my tribal character and some ladies help Ajay’s (Devgn) Air Force officer by building an air-strip overnight in Bhuj. It’s a lovely story of heroism.”

Sanjay Dutt has acted in over a zillion films. Sharing if their kids, Iqra and Shahraan watch their superstar dad’s films, Maanayata Dutt stated, “My son likes the ones with superheroes, my daughter is into animated features. They haven’t seen Bhoomi, Saheb Biwi Aur Gangster 3, which Sanju made after he came out, because both films are in the 13-plus bracket.” She further added that they have watched Munna Bhai MBBS and had liked it more. She said, “Yes, they have watched both and liked.” When asked if there is any possibility of Sanjay Dutt and Maanayata Dutt sharing screen space together, the doting wifey stated, “No, my hands are full, and I am in a happy space. I just did one film and at times, I feel I was made to do it so I could meet Sanju. Things happen for a reason. Had acting been a passion, I would have pursued it. If I want something, I go for it but I don’t see myself acting again.”

Also Read: When Sanjay Dutt Blamed His First Wife, Richa Sharma's Parents For Their Divorce In An Interview

Given that Prasthanam is Maanayata Dutt and Sanjay Dutt’s first produced film together, she shared the memories that will be associated with the film when they look back at the same in the due course of time. She was quoted as saying, “It will always be special as it’s my first film with my husband. Its title means journey and not just on-screen. It encapsulates Sanju’s real-life struggle and the adulation that kept him going, Manisha’s (Koirala) battle with cancer and the highs and lows in Jackie Dada’s graph. It’s my journey with them and I can only hope that our destination is a success.”