Sanjay Dutt has always been controversy’s favourite child, thus a biopic, Dutt is in the making, starring Ranbir Kapoor in the lead role. The movie, being helmed by Rajkumar Hirani has already created a stir and people are speculating if it will show all the affairs of Sanjay Dutt, including the one with Madhuri Dixit. It is no hidden secret that yesteryear’s most loved on-screen pair, Sanjay and Madhuri were a ‘thing’ in the 90s and everyone knew about their torrid affair.

Sanjay Dutt Feels 'A Lot Has Gone Past, People Have Matured' On Working With Madhuri Dixit In Kalank

Maanayata Dutt Has The Sweetest Wish For Sanjay Dutt, Shares A Cosy Picture With Him After working together in several movies like Saajan, Thaanedar, Khalnayak etc, Sanjay and Madhuri fell in love with each other. According to the industry insiders, theirs’ was not a fly-by affair, the two were serious about each other. After almost 25 years, we will see the ex-couple once again on the silver screen, all thanks to Karan Johar. The ace filmmaker has been able to bring the iconic couple for his next film, Kalank which is a period drama, also starring Alia Bhatt, Varun Dhawan, Sonakshi Sinha and Aditya Roy Kapur. Now that we are soon going to see them on the big screen once again, lets take a look at some of their throwback interviews about each other. 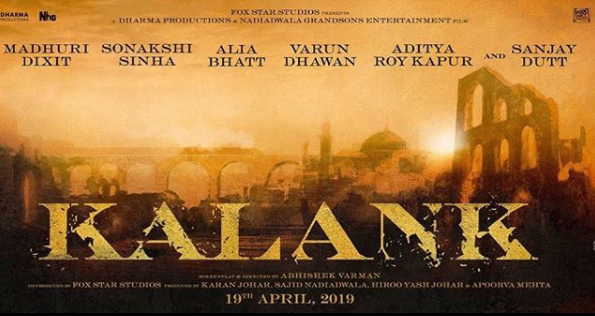 Back in 1991, before and after the release of the superhit, Saajan, Madhuri and Sanjay’s love affair was talk of the town and was every magazine’s cover story. There were many stories about their alleged affair that started on the sets of their films. They started working in 1988 and worked till 1997. The two shared a superb camaraderie and were very fond of each other. In one of her interviews, Madhuri once fondly talked about Sanjay and said:

“My favourite partner is Sanjay Dutt, he’s a real joker…and his stories make me laugh all the time, but he is also a gentleman. Sanju is a fantastic person. He has a loving heart and, in contrast to the widely held view, a good sense of humour. He is the only guy who makes me laugh all the time. He does not play games. He is open and uncomplicated.” Her interviews about Sanjay Dutt added fuel to the fire and soon, there were whispers in the B-town about their mutual admiration and love for each other. The two fell in love with each other at a time when Sanjay was married to his first wife, Richa Sharma. There were rumours all around that Sanjay will divorce Richa and marry Madhuri. During this time, Richa was in the USA, getting the treatment for her brain tumour and the news of Madhuri and Sanjay’s affair reached her ears. Soon after hearing the rumours of her husband’s affair, Richa flew back to Mumbai in 1992. 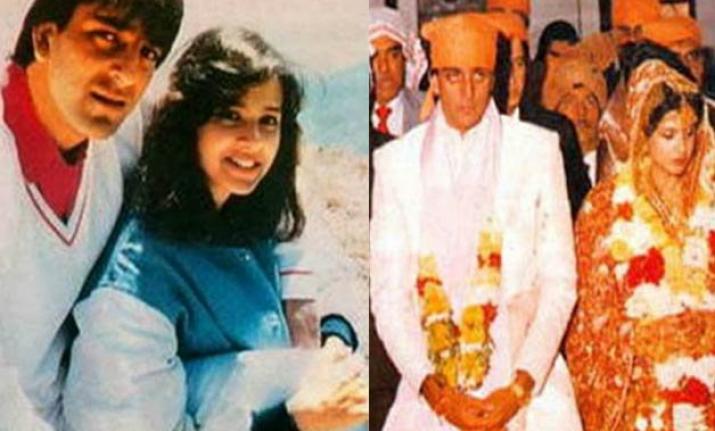 Talking about her alleged divorce news and getting back to Sanjay, Richa was once quoted saying:

“We’ve been apart for so long, we’re not totally in tune with each other. But it is nothing serious, we can overcome it. I did ask Sanjay if he was going to divorce me and he said absolutely not. As for me, I don’t want a divorce. I’ve come down because I want to be with him again.” 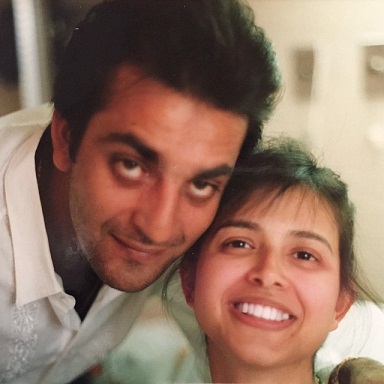 When Richa came back from New York, she was hopeful about her married life that was falling apart because of lack of communication and entry of another person in their lives. But, within 15 days, Richa returned to New York with a broken heart and gave another interview in which she said:

“I love him with all my heart. Whatever happens, I will always stand by him. He treated me very shabbily when I came down to meet him.”

Must See: Bollywood And TV Actors Who Embraced Fatherhood Late And Became Dad After The Age Of 40 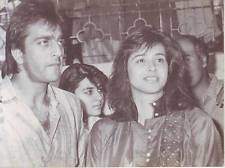 Richa’s sister, Ena Sharma outrightly accused Madhuri of breaking her sister’s marriage with Sanjay. In her interview with CineBlitz magazine in 1992, Ena lashed out at Madhuri and said:

“Madhuri is so inhuman…I mean Madhuri can get any man she wants. How can she go for a man who’s behaved in such a way with his wife? I know they are good friends because he’s called her from our house. And he does talk to her brother and her sister here. But we never looked at it as if “okay the guy’s involved with Madhuri”. We’re very open, we’ve always given Sanjay his space.” Though Richa and Sanjay never got legally divorced, they parted ways after this episode. Soon, her brain tumour relapsed and she passed away in 1996. It wasn’t like Sanju baba cheated on his wife, it was media, their long-distance relationship, Richa’s ailment and the situation around them that created the gap. Sanjay was arrested for the illegal possession of arms in 1993, under TADA and was sent to jail. There were rumours that soon after Sanjay was arrested, Madhuri decided to end their alleged relationship and disassociate herself from Sanju. She distanced herself from Sanjay and did not even go to jail to meet him, not even once. He was released for a short span on bail in October 1993, and it was then when he talked at length about his relationship with Madhuri.

Also Read; Successful Bollywood Actors Who Got Married Early In Their Lives When he was asked about how he felt when Madhuri decided to disassociate herself completely with him, this is what heartbroken Sanjay said:

“I didn’t get affected by her statement. I have been her colleague and I have done a lot of films with her. See, I need to establish a proper rapport with all my co-stars, it may be Madhuri or Sridevi. For instance, during the first few days of Gumraah, I wasn’t comfortable because you know how Sridevi is. She is aloof and I had to get talking to her. So what Madhuri said didn’t bother me that much, in fact, it didn’t bother me at all.” Though Madhuri decided to stay mum about their affair, Sanjay decided to answer all the questions and put a full stop to it. He denied any affair with Madhuri and said that they were just co-stars and good friends. He also revealed that he went up to apologise to Madhuri for the rumours about their affair. Sanjay said:

"This story broke out around the time of Saajan. In fact, when the story broke out in the press, she was shooting for Khel in Kenya. So, when we had a schedule of Saajan after that, I went up and said sorry to her. Because she was under public scrutiny for no fault of her. She took it well.” 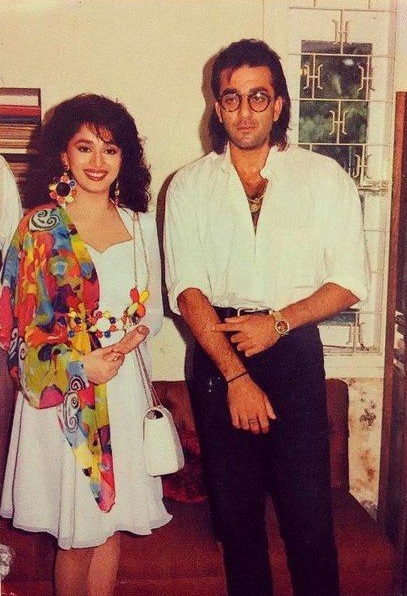 When he was further probed to reveal if her ever dated Madhur, he quickly replied:

“I wish I had a scene going on with Madhuri. But I don’t. Look I get friendly to every co-star of mine. If you see me with Raveena Tandon, you will feel I am having an affair with her too.” 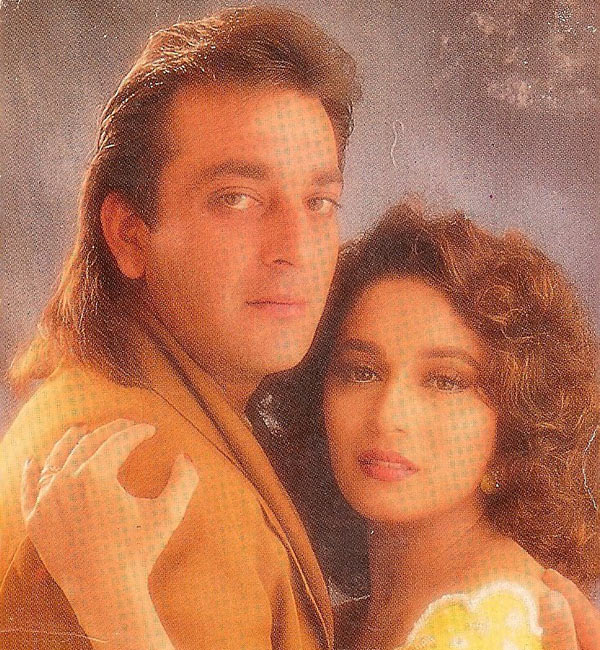 He also addressed their marriage rumours and said:

“There has to be something on between us for me to marry her.” 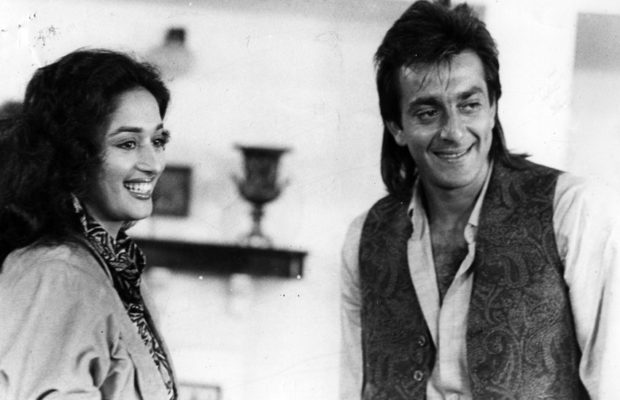 Though all these years, Madhuri has kept quiet about her relationship with Sanjay, but sometime back, when the biopic on Sanjay Dutt was announced, there were rumours that Madhuri isn’t happy about it and doesn’t want her part to be included in the story. Refuting all these rumours, Madhuri said:

“For where I am today, this [the topic of Dutt] has become redundant. Life has come a long way since then. I don’t know where these reports are coming from. In any case, it doesn’t make a difference to me.”

Must Read: Madhuri Left Bollywood At The Peak Of Her Career To Marry A Doctor Who Was Her Brother's Choice 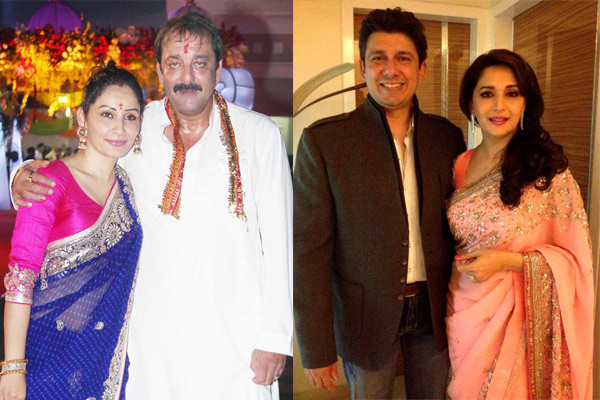 Though they never accepted their relationship, their love story was one big topic of discussion and their jodi was loved by all. But, time and destiny had other plans and the two parted ways and moved on in their respective lives. Madhuri went on to marry Dr Sriram Nene in an arranged marriage setup and has two sons. Sanjay later fell in love with model Rhea Pillai and tied the knot with her in 1998. Sanjay and Rhea’s marriage also didn’t last for long and the couple parted ways in 2005. Sanjay then tied the knot with Manyata Dutt in 2008 and the couple is blessed with twins, a boy, and a girl.

We are eagerly waiting and super-excited to see Madhuri and Sanjay come together on the silver screen once again in Kalank, alongside the young brigade of talent.  We wish the entire team of Kalank all the best!

Next Read: Sanjay Dutt And The Women In His Life, From Tina Munim To Manyata Dutt

Sanjay Dutt Feels 'A Lot Has Gone Past, People Have Matured' On Working With Madhuri Dixit In Kalank

Maanayata Dutt Has The Sweetest Wish For Sanjay Dutt, Shares A Cosy Picture With Him