When happiness knocks your door, your life seems to be as perfect as it could ever get, and the world ceases to look like a happy place. Exactly this is happening these days with the ace tennis player, Sania Mirza and Pakistan cricket team captain, Shoaib Malik. The lovebirds walked down the aisle on April 12, 2010, in the presence of their close pals and family. It was on October 30, 2018, Sania and Shoaib got promoted to parents with the arrival of their little baby boy, Izhaan Mirza Malik.

Announcing this happy news with all their fans, Shoaib took to his official Twitter account and tweeted, “Excited to announce: It’s a boy, and my girl is doing great and keeping strong as usual #Alhumdulilah. Thank you for the wishes and Duas, we are humbled #BabyMirzaMalik”. Ever since the baby boy is born, Sania has been sharing lovely clicks with him on her Instagram handle. (You May Also Like: Nakuul Mehta Pens A Shayari For Wife Jankee Parekh Mehta On Their 7th Wedding Anniversary) 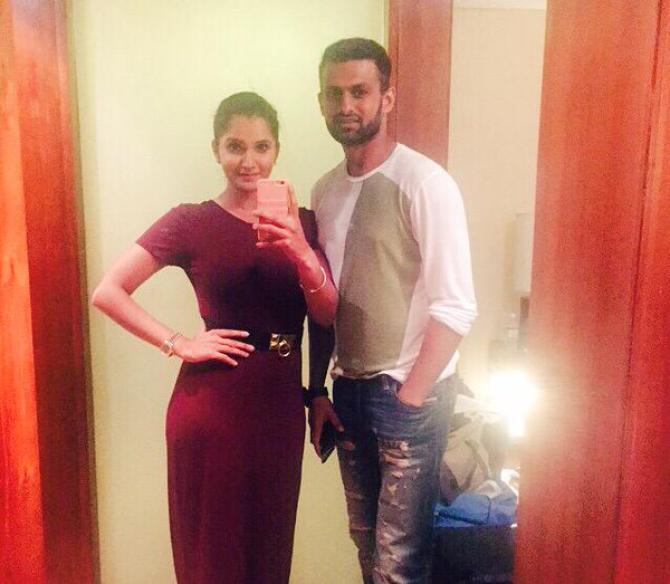 Lately, she took to her social media and shared the most happening and loveliest picture with Izhaan. She captioned the snap as, “I’ve known love in its purest form through you My boy Ps- he loves the camera and tv we just watched baba @realshoaibmalik winnnn #izhaanmirzamalik #allhamdulillah”. Here’s the snap she shared, along with the ones she posted on her Instagram story: 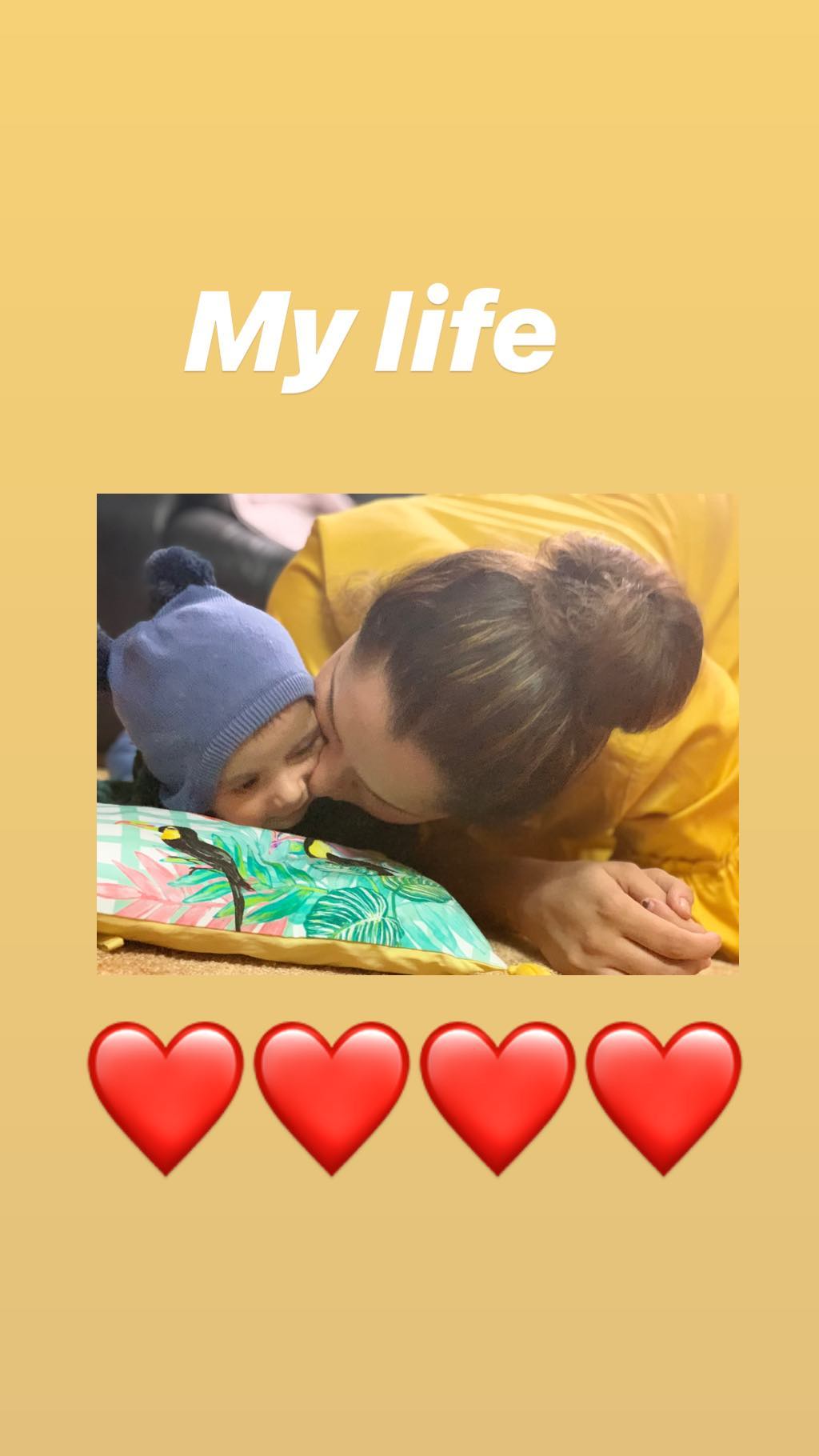 Not just us, even Sania’s industry friends couldn’t keep calm after seeing this lovely snap. While Pareeniti Chopra wrote, “I’ll die”, Priyanka Chopra comments, “Sooo cute”, followed by heart and kiss emojis. Also, Mahesh Bhupati went on to comment, “Yessss, is he missing me???”, to which Sania replied, “@mbhupati haha not yet”. Riteish Deshmukh wrote, “Adorable”, along with two heart emojis and Neeti Mohan wrote, “Awww this is pure love”. Here are the screenshots of the comments posted by the celebs: 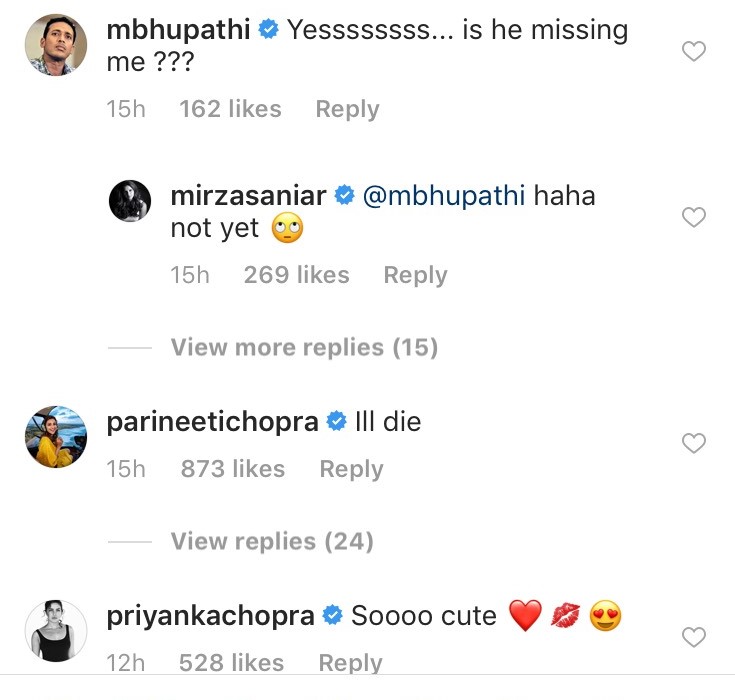 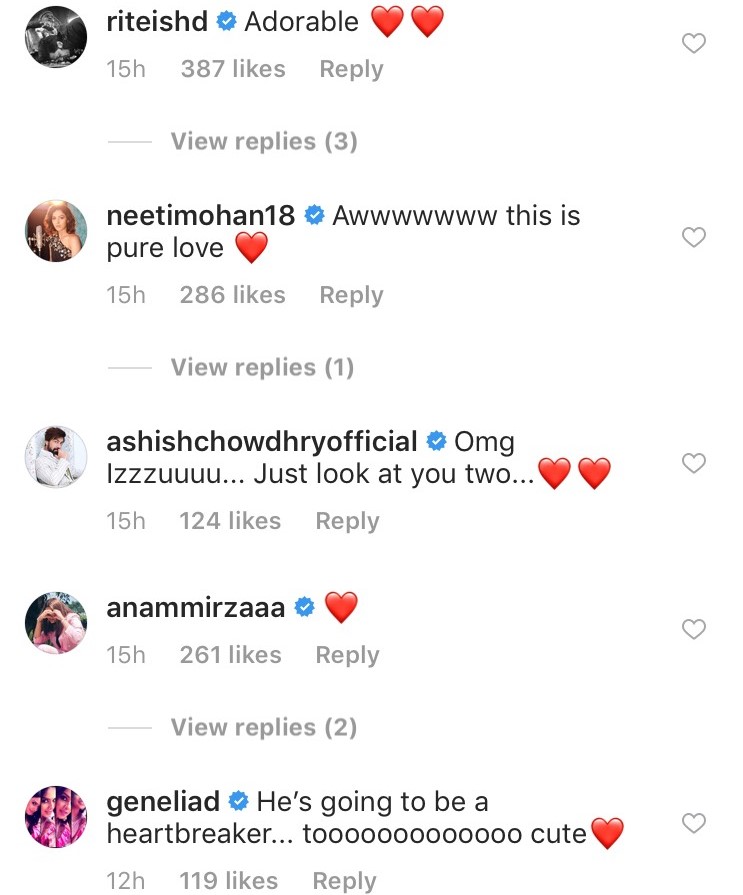 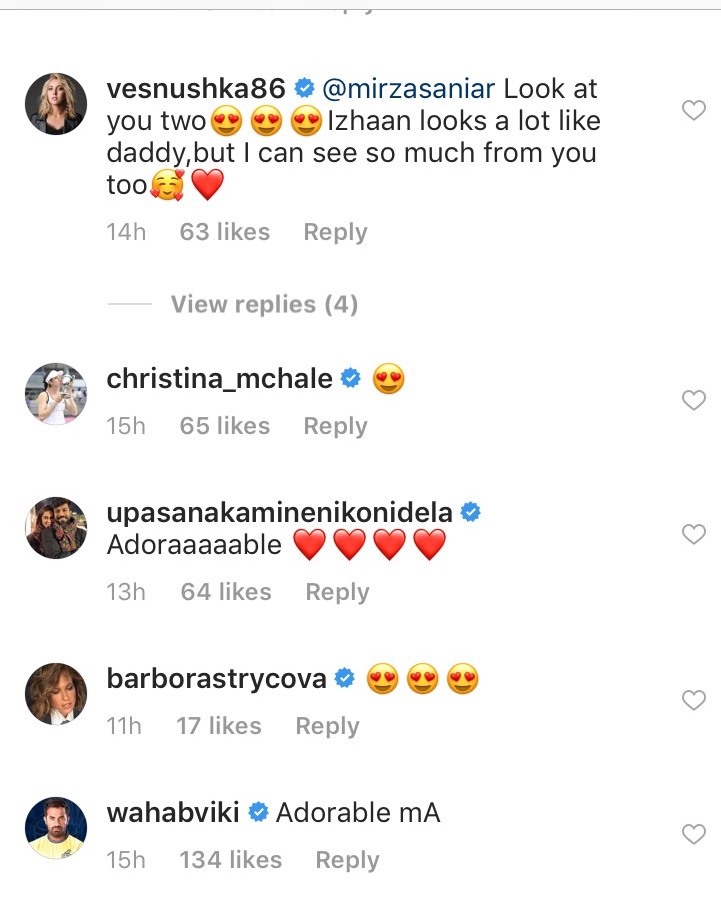 In an interactive fan session on Instagram, at the time she was expecting, Sania answered some interesting questions related to her pregnancy phase as well as her husband, Shoaib. When one of her fans asked her, “How does it feel to get onto the journey of motherhood. How excited are you at this moment?”, Sania replied, “Soooo excited”. Another fan asked her, “Is it easy to travel in pregnancy?”, to which she said, “It has been for me, Allahamdulillah”. (Also Read: Ranbir Kapoor Can't Take Eyes Off 'Muse' Alia Bhatt At Umang 2019, Lovebirds Happily Pose For Camera) 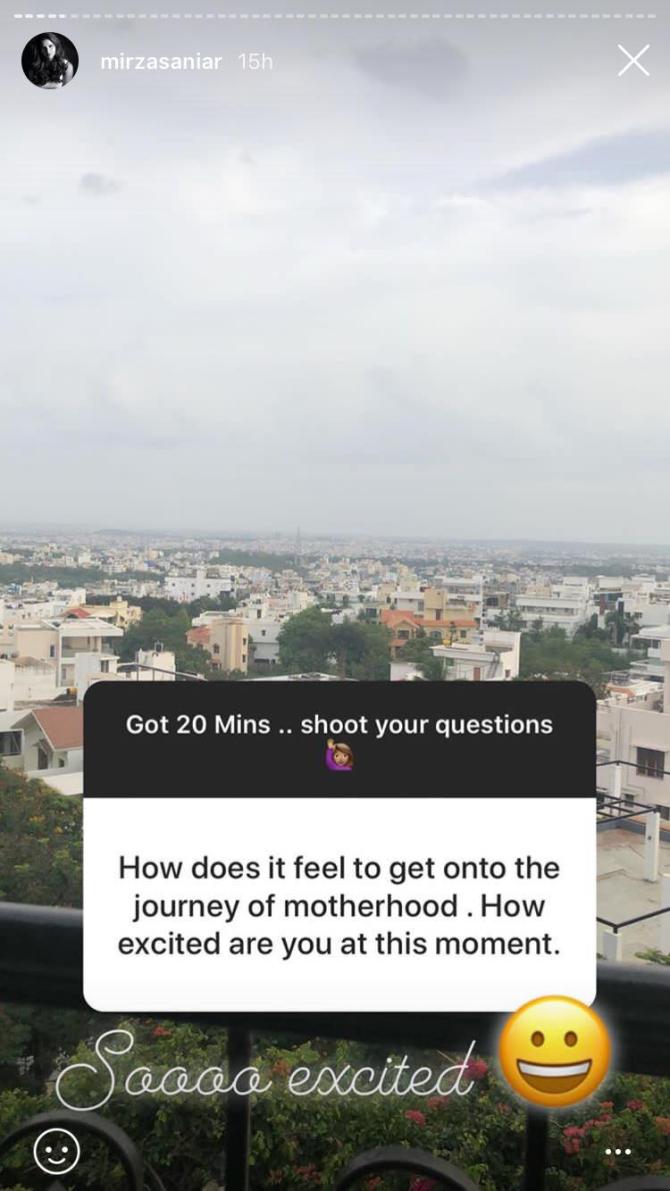 Sania also shared some noteworthy pregnancy tips for the soon-to-be mom’s out there. When one of her fans asked, “Face fat/bloating is common issue during pregnancy. How do you manage to have tonned face during…”, Sania revealed, “I’ve been lucky I guess… PS-drink lots of water”. Another fan asked for some pregnancy tips, to which Sania shared, “Stay as active as possible and eat healthy.” 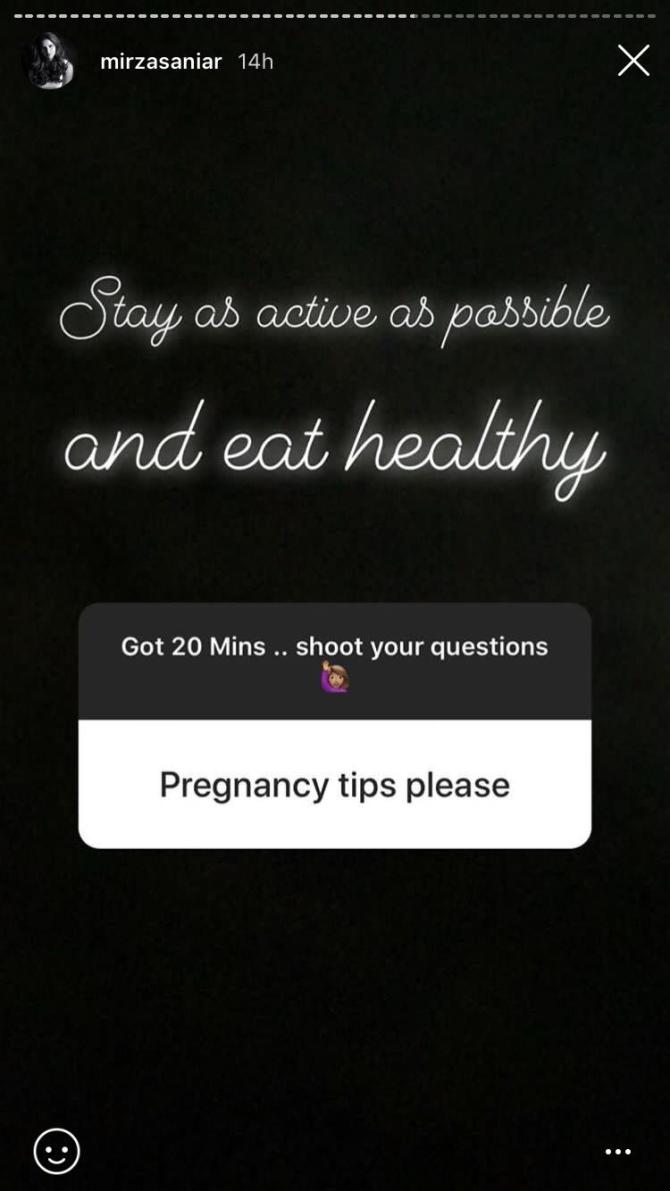 In an interview sometime back, Sania elaborated on marrying Shoaib and said, “A lot of people have this notion that Shoaib and I got married to unite the two countries. That is not true. Whenever I have been to Pakistan – and I go once every year to meet my in laws – the love that I get there is immense. The whole country calls me ‘bhabhi’, and they give me so much respect. I also know that that love is not necessarily for me, it is for my husband who has been cricket captain and what he means to everyone there. The respect they have for him transcends to the respect for me… Just like when Shoaib comes here, and he gets the love and respect of our countrymen.” (Do Check: Varun Dhawan's Girlfriend, Natasha Dalal Starts Shopping For Their Wedding, Wants It To Be Intimate) 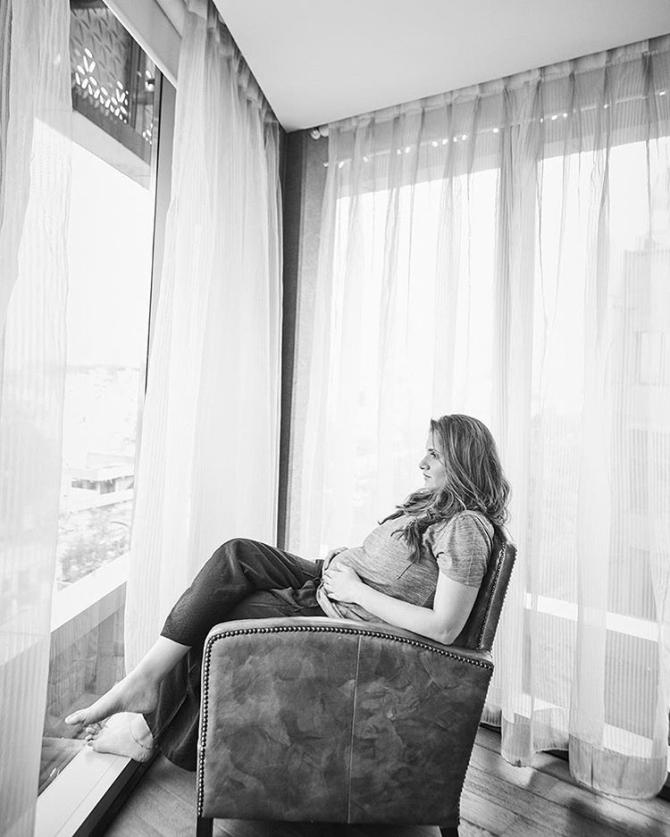 Sharing if getting pregnant was the right move, she made, Sania remarked, “When we got married we were both clear that our careers wouldn’t be compromised. He has been more ready for this than me for the last few years, to be honest. He’s also a few years older than me, so that’s understandable. But he never told me, ‘Maybe we should… this is the time…’ I really respect that in a man. It is often taken for granted that as a woman you will put your life on hold and do what’s expected. I never felt that pressure. I’ve always wanted to have a child and have a family, I just didn’t know when”. She also shared that her knee injury brought out chat about pregnancy. The newbie mommy was then quoted as saying, “I found out early that I was pregnant, and quite by chance. I remember it was the 25th of February, and the only thing that concerned me immediately was that I had been training like a dog. They say you must be most careful in your first trimester, and I was running so much, it got me a bit worried. Once I knew, I took it easy. I didn’t have as much morning sickness as I’d expected, just a few mood swings. And I kept myself active throughout.” (Also Read: Raj Kummar Rao Reminisces When Patralekhaa Felt Insecure Of 'Someone', On Koffee With Karan Season 6) 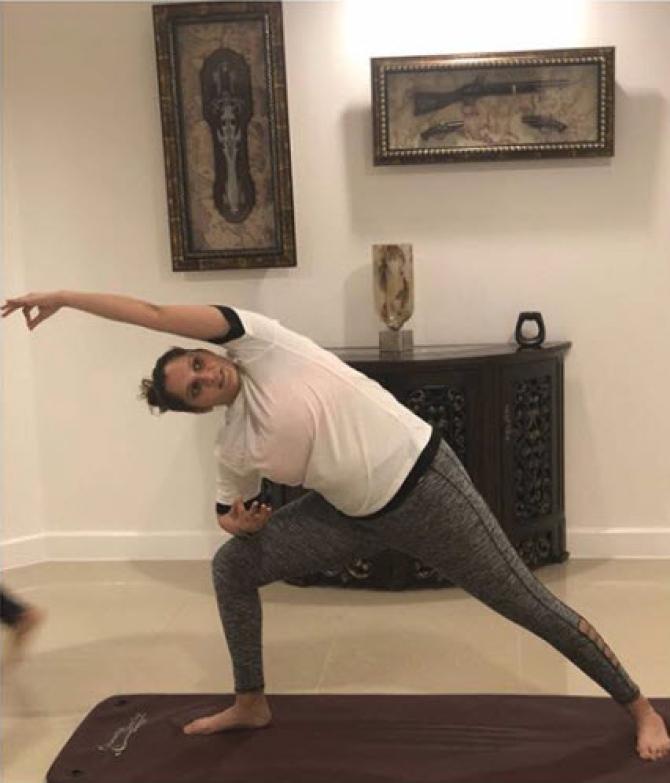 Revealing if she was an indulgent eater, or disciplined as an athlete, Sania remarked, “Fortunately, I’ve lost the taste for sugar during my pregnancy, so that’s a really lucky thing. I started craving mirchi… but that’s better than craving chocolate, I thought. My dietician – who was also my nutritionist before I got pregnant – advised me against maida. But I had these sudden gluten cravings. Now, I’ve always loved rice, but I now want nan. It’s amazing the weird cravings one can have. Emotionally, this pregnancy has been a self-realisation. As a woman, you sometimes don’t realise the things your body can do and create; you understand that only when it’s doing it!”

We still can’t take our eyes off from this lovely picture of mom-son duo, Sania and Izhaan. What about you guys?