Decoding Gujarati Wedding: Everything You Need To Know About The Sacred Pre And Post Wedding Rituals

Decoding Gujarati Wedding: Everything You Need To Know About The Sacred Pre And Post Wedding Rituals

Regional weddings in India have their own distinct charm. Every region of the country reflects its tradition and culture in its weddings. Read on to know all there is about the traditional Gujarati weddings.

A wedding is the most sacred ritual in India and every community or religion has its own traditions, ancient as well as modern, i.e., the sheer diversity that makes it even more special. Gujarat is the land of colours, riches, culture and food. Gujarati people are warm and hospitable, and this hospitality is evident in their wedding functions also. The festive nature of the Gujarati people reflects in their wedding rituals and practices as their weddings are filled with fun and joy.

Hey Shubhaarambh, Ho Shubhaarambh, Mangal Bela Aayi, Sapnon Ki Dehri Pe, Dil Ki Baaji Re Shehnai… a wedding in India is more than just two people tying the knot on an auspicious day in a traditional ceremony. It is more about the rituals and customs that add the oomph factor to one's wedding. Gujarati weddings are no different as from pre-wedding rituals to post-wedding customs, they are vibrant, intricately planned, culture-rich festivities full of celebration and traditions. Here are the pre- and post-wedding rituals of a Gujarati wedding.

10 Awesome Things That Definitely Happen At Every Gujarati Wedding

Chandlo matli in a Gujarati wedding 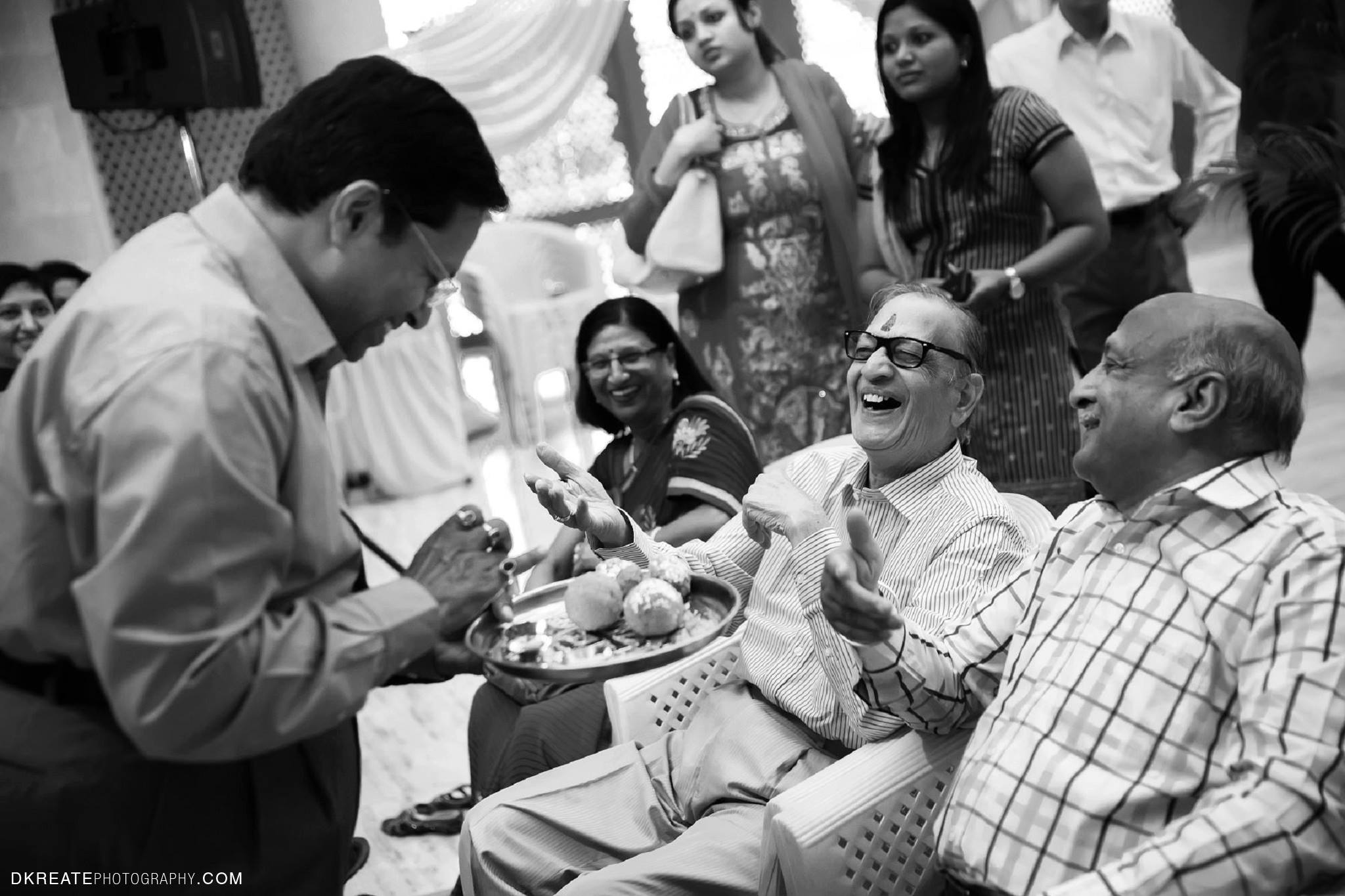 This is the foremost Gujarati marriage function, which is all about the acceptance of the marriage. Chandlo is basically a red-coloured circle made in the centre of the groom’s forehead. The bride’s father along with four other male members from the bride’s side visit the to-be groom’s home to apply it. Along with this, shagun is also given as a token of love, and the marriage date is also fixed on the same day.

Gol dhana in a Gujarati wedding The engagement ceremony in a Gujarati wedding is known as gol dhana, which means coriander seeds and jaggery. So basically, at the engagement ceremony, both these things are distributed amongst the guests. The bride-to-be and her family pay a visit to the groom-to-be’s house with sweets and a few gifts. The rings are exchanged in the presence of their respective families, and the couple seeks blessings from five married women from each side of the family.

Mehendi ceremony in a Gujarati wedding Two days prior to the wedding, the mehendi function is hosted by the bride’s family. Just like any other Indian wedding, beautiful mehendi designs are applied to the bride’s hands with henna. Other female members of the family also apply mehendi on their hands.

Sanji/sangeet sandhya in a Gujarati wedding 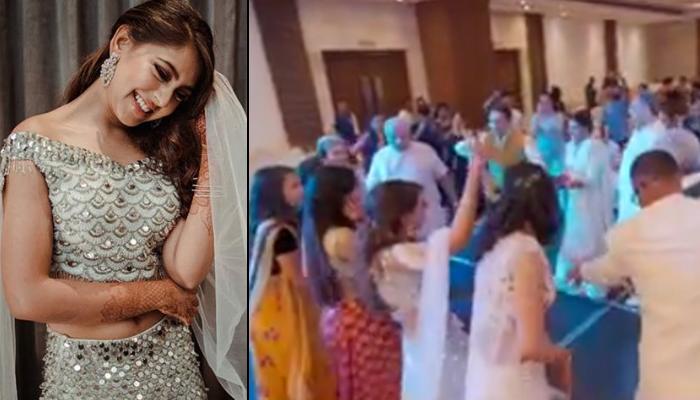 A song and dance ceremony in Gujaratis is known as sangeet sandhya or sanji. It takes place after the mehendi ceremony and before the wedding day. This is one such function, where both the families get a chance to know each other even more. Traditional Gujarati wedding songs are sung, and guests enjoy tapping their feet on garba and dandiya.

Mangal mahurat in a Gujarati wedding The griha shanti puja is also performed at both houses. As the name itself suggests, it is done for acquiring peace and calm in the houses.

Pithi in a Gujarati wedding 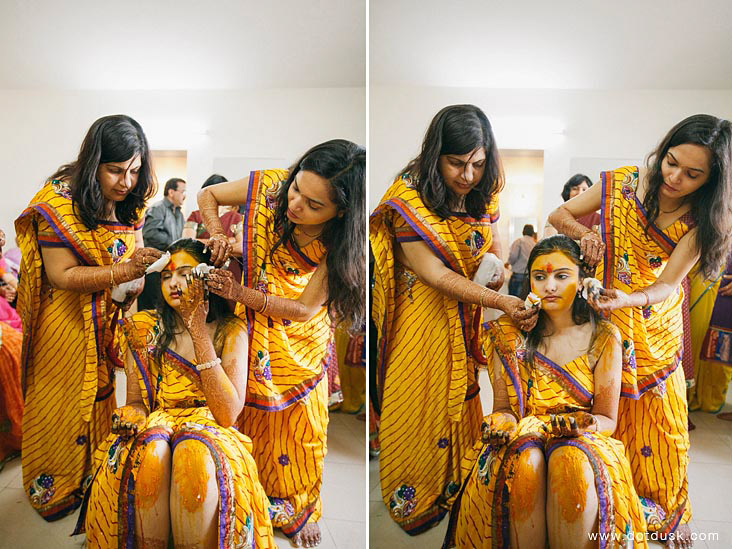 Pithi is the Gujarati name for the haldi ceremony. In this ceremony, the bride sits on a stool, and the ladies of her family apply a paste of sandalwood, turmeric, rosewater and perfume on her body.

Mameru/mosaalu in a Gujarati wedding This ceremony takes place a day before the wedding day. The bride’s mama (her mother’s brother) visits her house and gifts her sarees, bangles, and jewellery along with many other things.

The jaan ritual in a Gujarati wedding 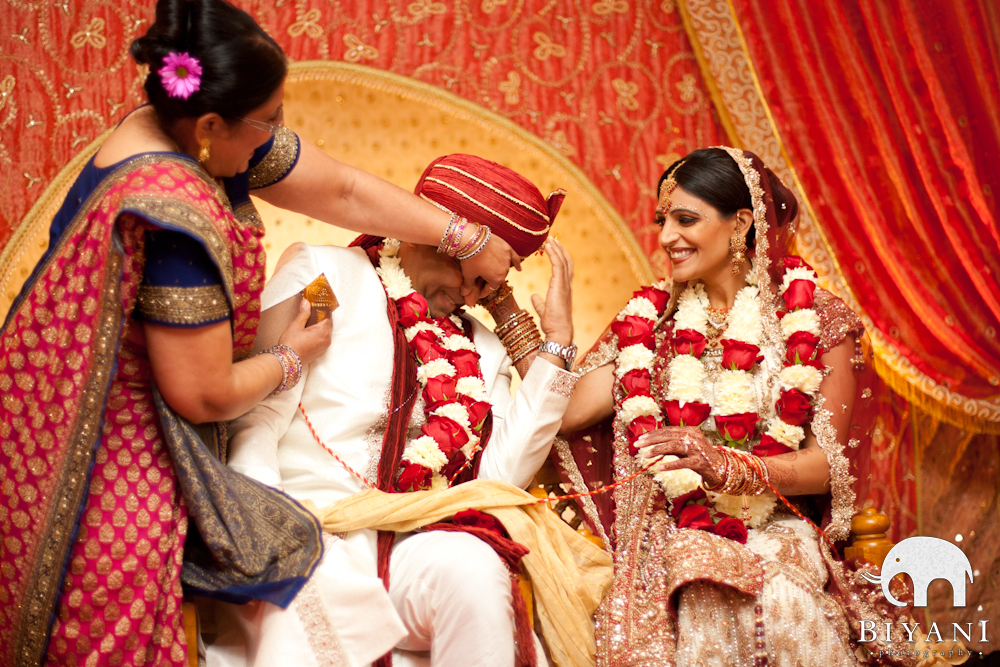 The jaan, held on the wedding day, is a very entertaining, sweet and funny ritual. After arriving at the marriage venue, the groom touches his soon-to-be mother-in-law’s feet for her blessings, and she tries to grab his nose while he tries to avoid her clutch. This playful ritual is to remind the groom that she is giving her precious daughter to him, so he should be humble and grateful.

Baaraat/varghoda in a Gujarati wedding In a Gujarati wedding, the groom’s sister waives coins wrapped in a cloth over his head before he sets out of his house. This is a way to ward off the “evil eye” around her brother. The groom usually leaves for his baaraat on a horse.

Jaimala in a Gujarati wedding This is the first ritual in the actual wedding ceremony. Here the wedding couple exchanges garlands made of fresh flowers.

Antarpaat in a Gujarati wedding 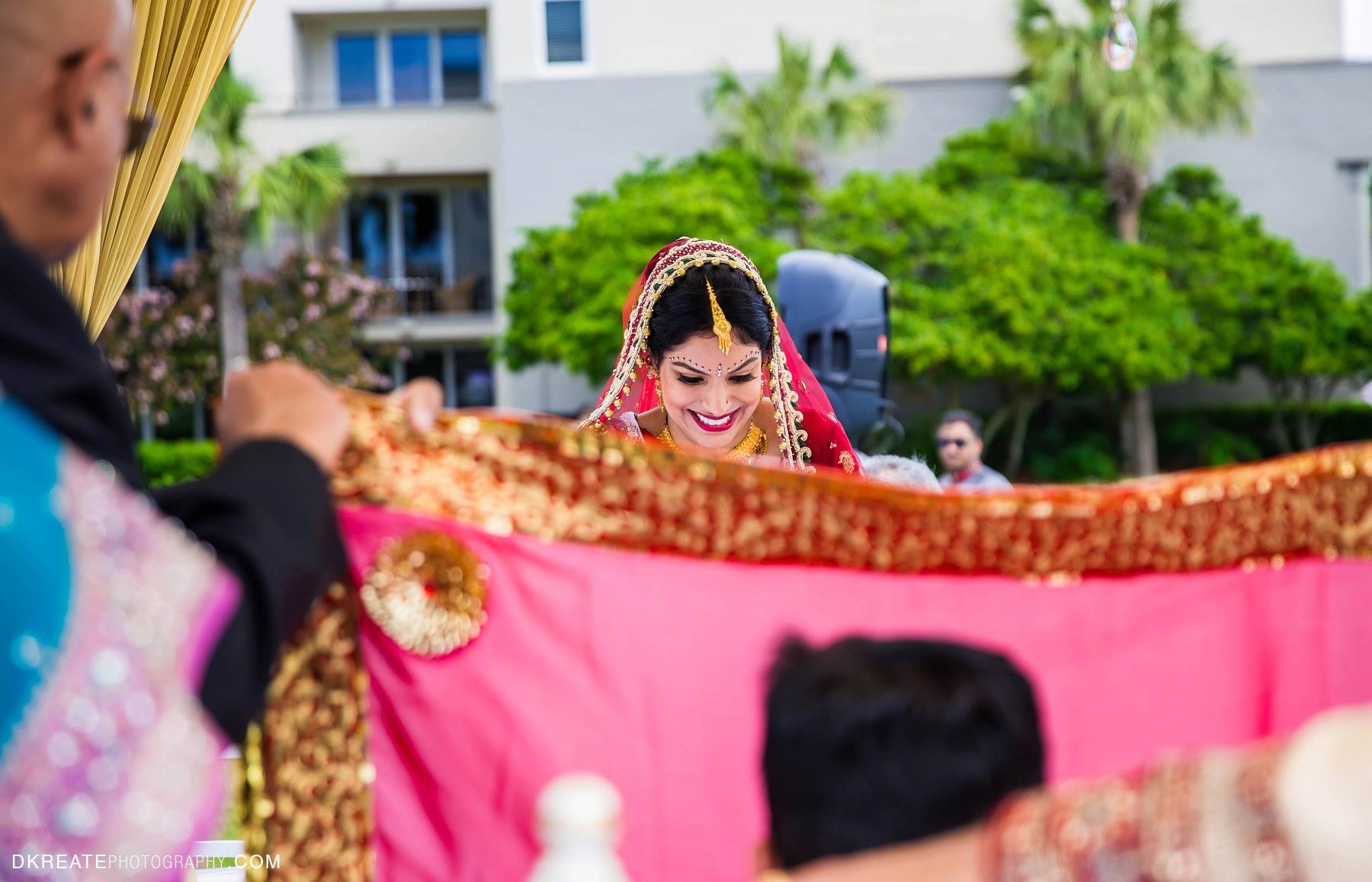 Kanyadaan, hasta milap and varmala in a Gujarati wedding 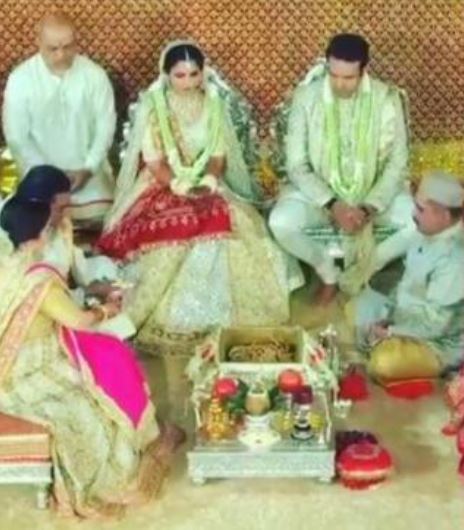 Kanyadaan is the moment when the bride’s father gives his daughter’s hand in the hands of the groom. After this, the bride’s saree is tied to the groom’s shawl in a ritual known as the hasta milap. After that, a cord is tied around the couple’s necks by the elders in the family to ward off evil, which is known as varmala.

Madhuparka/panchamrut in a Gujarati wedding In this ritual, a member of the bride’s family washes the groom’s feet, while he is offered a drink of milk and honey. 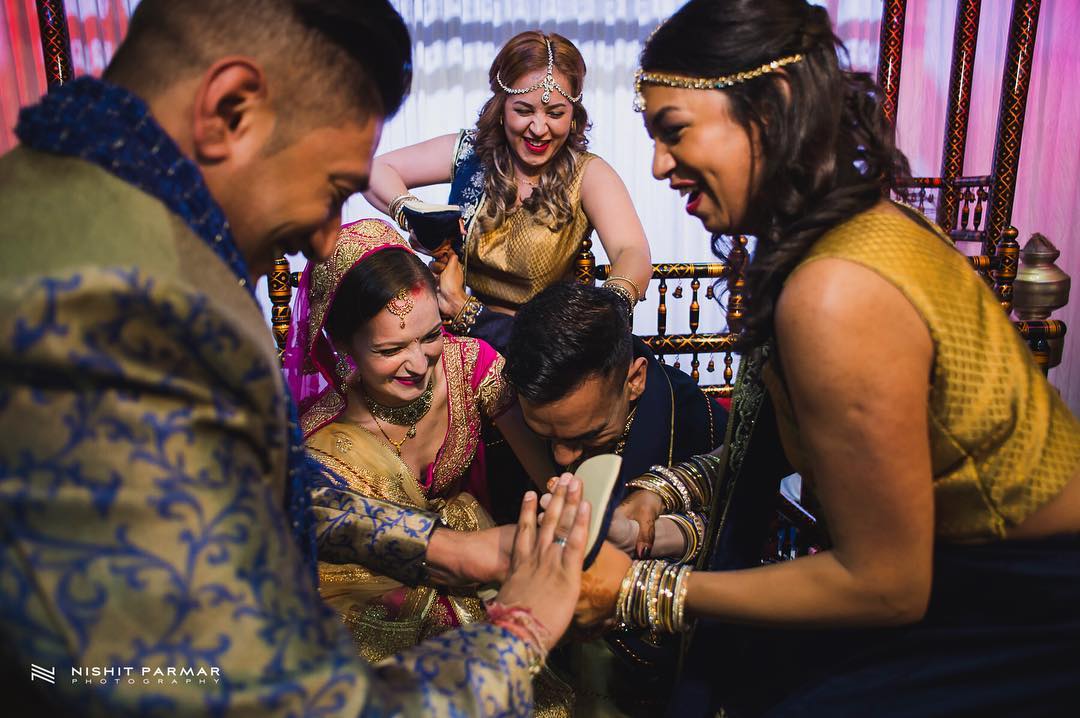 This is the most exciting and very entertaining ritual of most Indian weddings. In Gujarati weddings, when the madhuparka is going on, the sisters of the bride try to hide the groom’s footwear and agree to return them only in exchange for money.

Mangalpheras and saptapadi in a Gujarati wedding Unlike most Hindu weddings, Gujarati weddings have 4 pheras rather than 7. The priest chants the mantras, while the couple takes rounds around the sacred fire. They take seven steps together that are known as the saptapadi. The married couple then seeks the blessings of all their elders.

Also Read: Parsi Wedding Rituals: In One Of The Rituals, The Bride And The Groom Throw Rice On Each Other 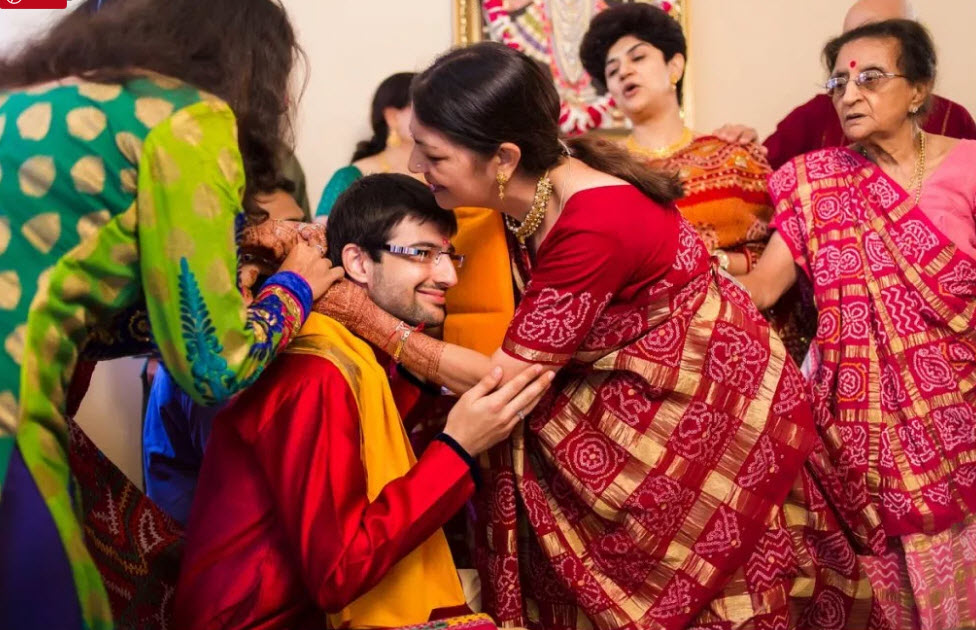 This is another one of the funny rituals of a Gujarati wedding. Here the groom catches hold of his mother-in-law’s saree and asks for more gifts. Her saree is then filled with gifts and cash, and later, is given to the groom and his family.

Vidaai in a Gujarati wedding 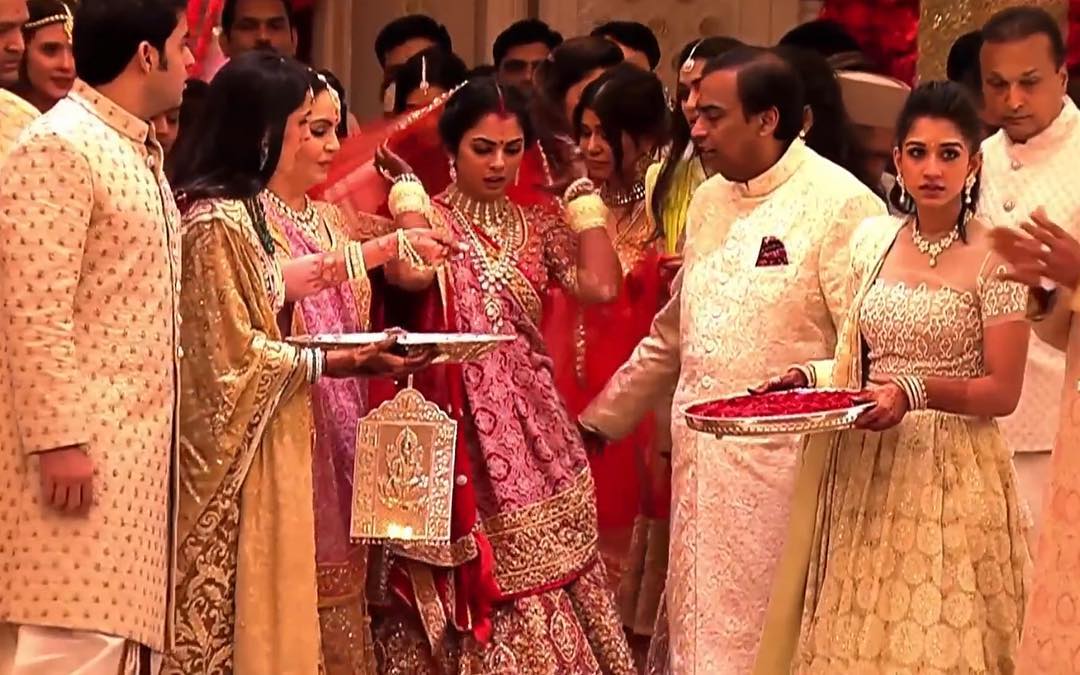 In the vidaai ceremony, the bride says her goodbyes to her family. She takes rice in her hands and throws it back without looking and her mother is supposed to catch the rice in her pallu.

Gharni laxmi in a Gujarati wedding In this ceremony, the bride enters the groom’s house by gently kicking a small handi of rice with her right foot.

Aeki beki in a Gujarati wedding 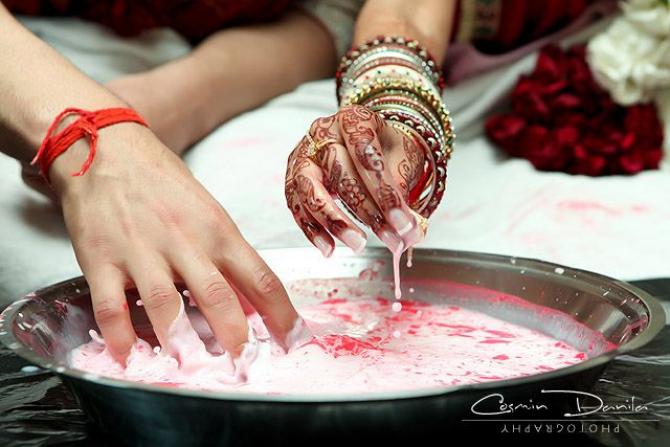 This ceremony is the most fun ceremony after the hectic wedding schedule. A bowl is filled with milk and a ring is dropped in it. Both the bride and the groom then have to find the ring, and whoever wins, gets a reward.

Reception in a Gujarati wedding So, these are the fun-filled and exciting rituals that a Gujarati wedding consists of. In case you think we have missed some ceremony, do let us know in the comments section below!

NEXT READ: 'Saat Pheras' In A Hindu Wedding: Importance, Relevance And Meaning Of Each 'Phera'

10 Awesome Things That Definitely Happen At Every Gujarati Wedding