Parsi Wedding Rituals: In One Of The Rituals, The Bride And The Groom Throw Rice On Each Other

Parsi Wedding Rituals: In One Of The Rituals, The Bride And The Groom Throw Rice On Each Other

From the hues of red and white tones and sombre rituals, Parsi weddings are one of a kind. So much so, that many customs go on for as long as one week. Here is your guide to a Parsi wedding!

India is a blend of many cultures and traditions and we are often fascinated by the ways different cultures perform their traditions. Especially, when it comes to weddings, we wish to know the rituals of different cultures and sometimes, some wedding cultures make a place for themselves in our hearts. From Sindhi wedding to Bengali, Punjabi to Hindu, Muslim to Gujarati, every wedding has its own flavours and something special to offer. The same is the case with the Parsi weddings, performed in Zoroastrian culture.

Parsi weddings are elaborate and different from the usual Hindu wedding traditions and rituals. From the hues of red and white tones and sombre rituals, Parsi weddings are one of a kind. So much so, that many customs go on for as long as one week. A Parsi wedding is also known as the ‘lagan’ ceremony. Parsi weddings also comprise pre-and post-wedding rituals like any other wedding. Here is your guide to a Parsi wedding!

An un-official engagement ceremony in a Parsi wedding 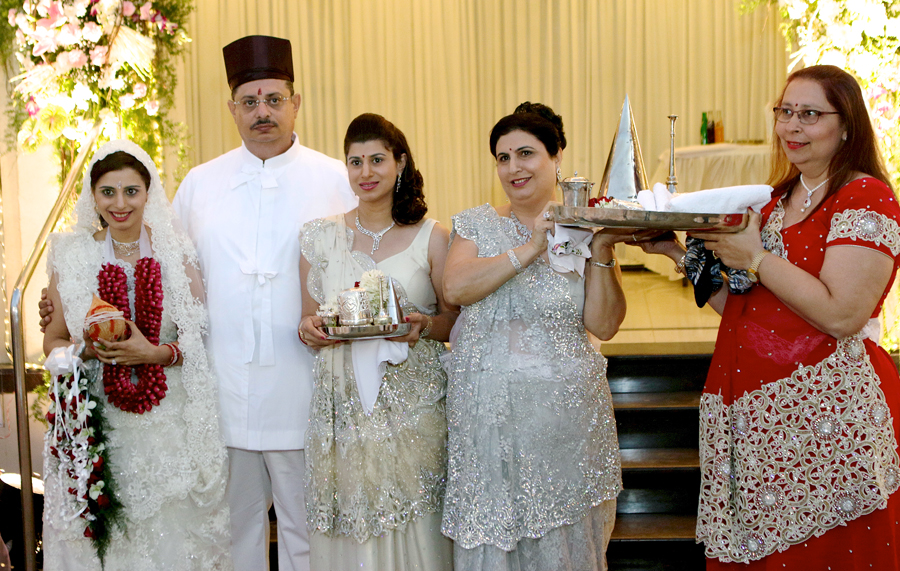 A tree-planting ritual in a Parsi wedding According to the madhavsaro ritual, both families are supposed to plant a tree in a flower pot and keep it on the main entrance of their respective houses. This pot is kept there for about 7-8 days after the wedding and watered every day. After this, it is removed from the entrance and placed elsewhere.

In-laws bring gifts for the bride in a Parsi wedding 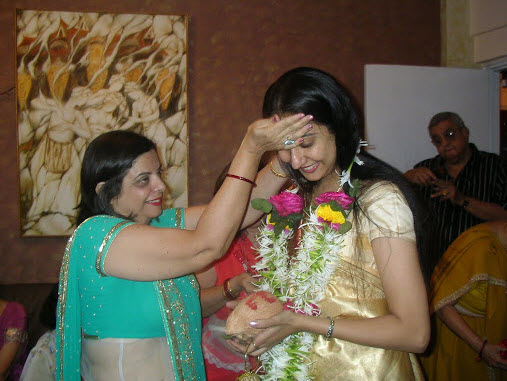 In the adarni ritual, the bride is visited by her future in-laws and family with gifts, jewellery and clothes. They are served delicacies by the bride’s family.

Haldi rasam in a Parsi wedding 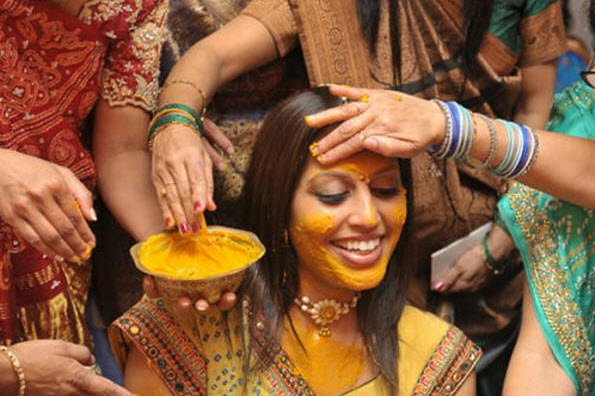 In the Supra Nu Murat ritual, five married ladies apply a turmeric paste on to the bodies of the bride and the groom. It is as same as the Haldi ceremony at a Hindu wedding.

The bath of purity and cleansing in a Parsi wedding 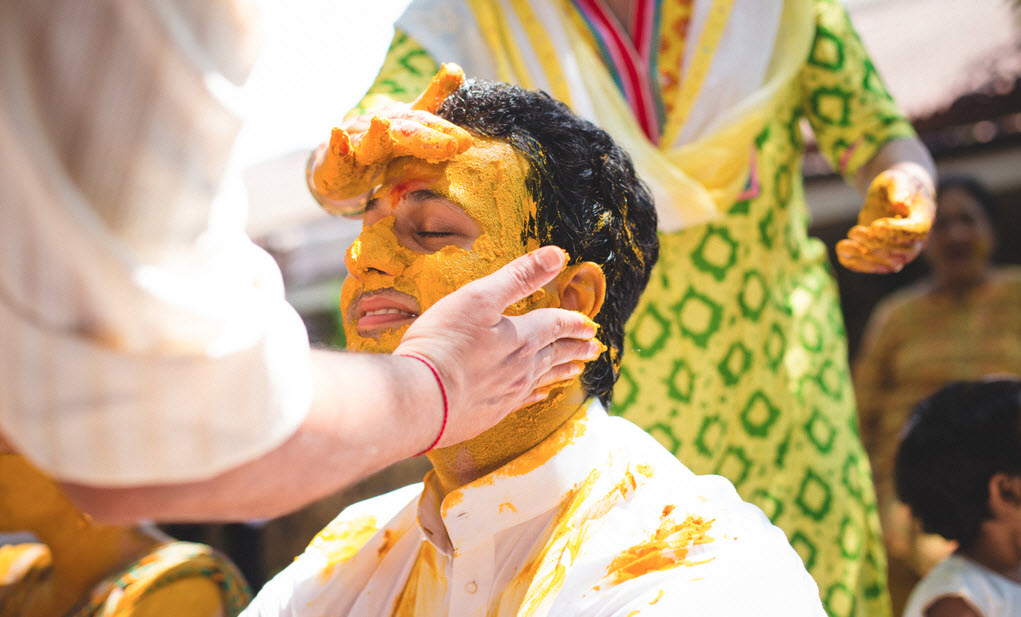 In this ritual, both the bride and the groom take a bath for purity and cleansing. They then start getting ready for the wedding. It is called Nahan ritual.

Wedding traditions and rituals of a Parsi wedding 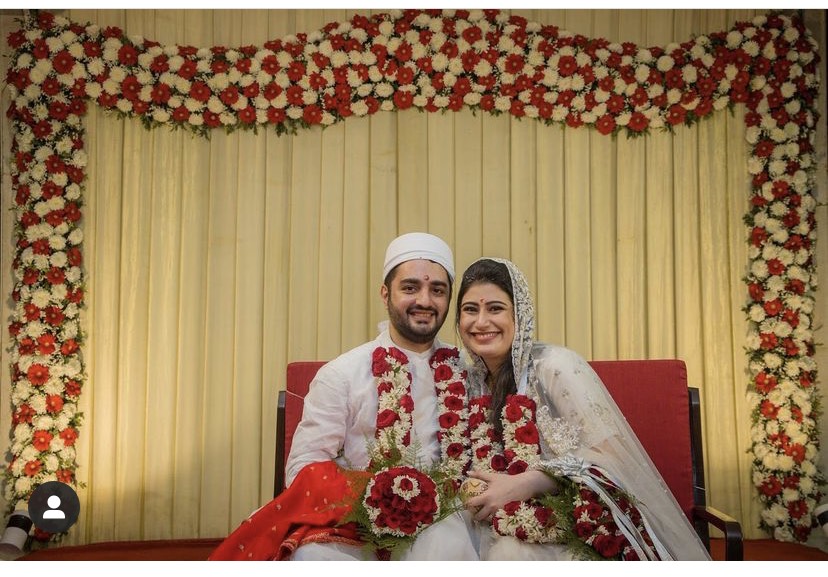 The bride wears a white ornate silk or chiffon saree, which is traditionally called the Para Gara. The sarees are passed on from one generation to another and they are aesthetically comfortable to wear. The saree is draped in a manner that can cover the bride's head during one of the rituals. She wears simple jewellery that is a family heirloom along with the red bangles gifted by her mother-in-law. The groom, on the other hand, wears a Parsi Dagli, a white overcoat, and a Fetah, which is a long black traditional Parsi hat. Along with it, they wear a white cotton shirt kurta and an off-white shawl on his shoulder with black formal shoes.

Recommended Read: Celebrities And Real Brides, Who Ditched Red And Chose Shades Of Gold for Their Wedding 'Lehenga' 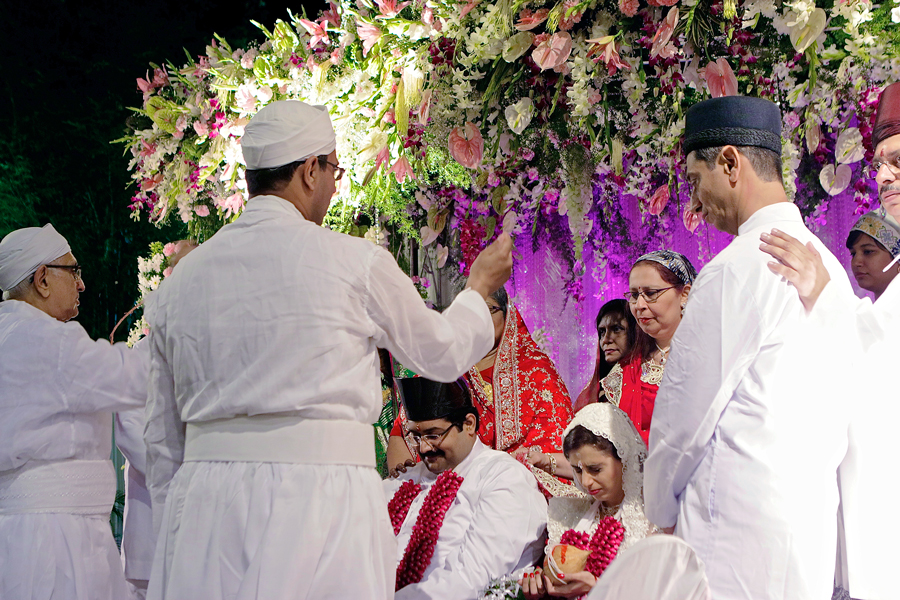 In Parsi weddings, a stage white and red stage is built for the couple. Here, the mother of the bride carries a tray that contains some rice, a coconut, dates, raw eggs and water. She then circles all these items, sprinkling water on either side of the groom and then throws them away. The groom’s mother repeats the same ritual for the bride. This ritual is called the achu michu ritual and is done to ward off any evil vibes that might have made their way towards the bride or the groom. 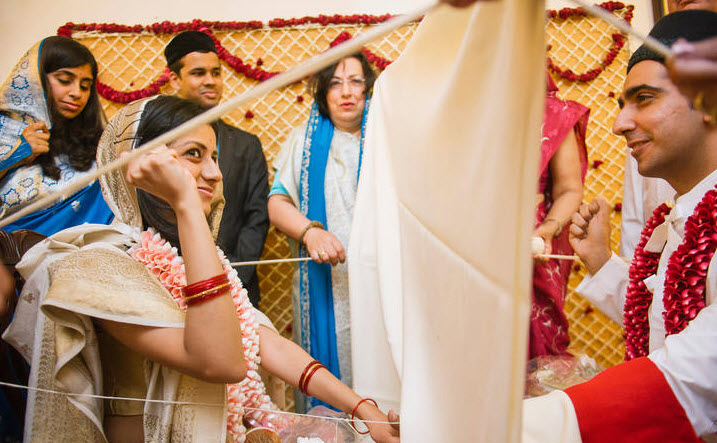 The bride and the groom sit facing towards each other and a white cloth parda placed in between them. This ritual is called Ara Antar. 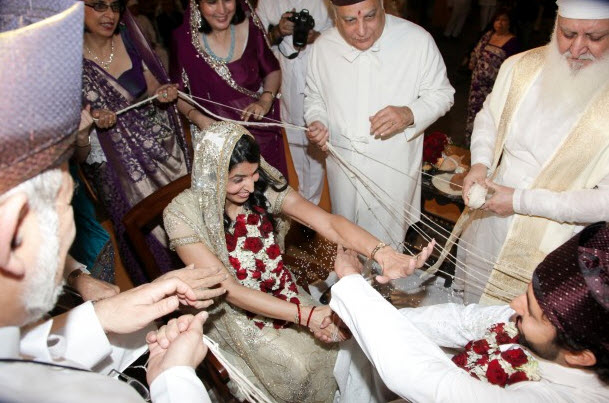 Once the white parda is placed between the bride and the groom, seven married ladies circle around them with a white thread seven times. After this, the bride and the groom shower rice grains, given to them by their mothers at each other from over the parda and whoever does it first is said to be the one, who will rule the household. All along with the ceremonies, the Parsi priest chants the Persian prayers.

The official exchange of rings in a Parsi wedding 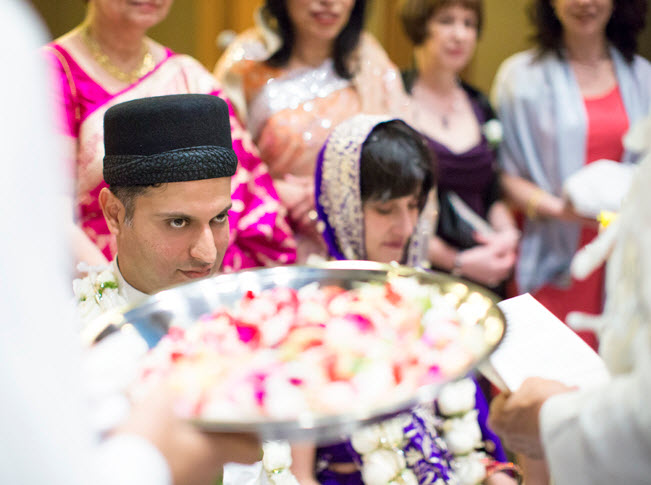 The couple sits next to each other with oil lamps placed on their sides, the priest begins the prayer rituals to officiate the wedding. The couple exchanges the rings to end the wedding rituals and is showered with rice to signify love and blessings. This ritual is called Chero Bandhvanu.

When the bride's sister unties the couple in a Parsi wedding In Haath Borvanu ritual, the sister of the bride is supposed to untie the couple from the strings and strands and in return, the groom gives her money. She also performs the cleansing ritual as she places the groom's hands in a bowl of water. After the bride's sister, it is her sister-in-law's turn to play with the groom. This rasam is called Pag Dhovanu and in this, the sister-in-law of the bride playfully threatens the groom to spill milk on his shoes and to save them, the groom gifts her money. 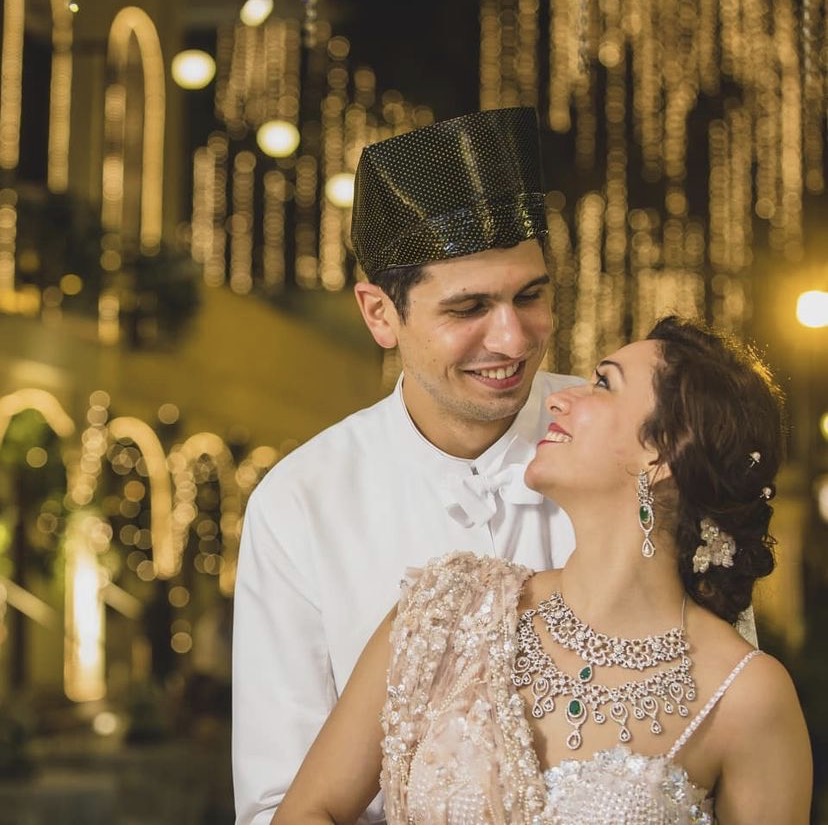 After all the rituals, the now-married couple exit the red and white stage and head to the fire temple for the blessings of the almighty. They also put out the oil lamps placed on the couple's either side during the wedding ceremony by placing a rose flower on the flame.

After the traditional Parsi wedding, happens a Reception Party 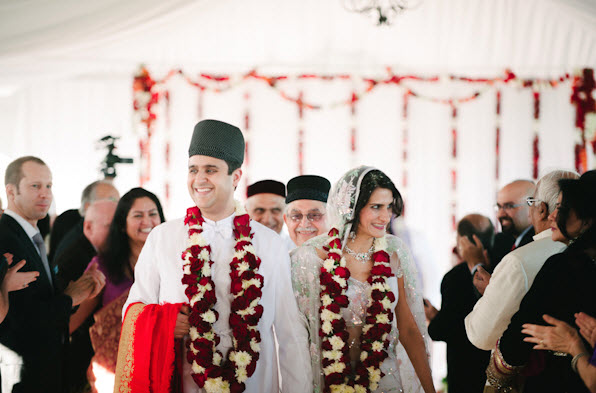 The grand affair of the traditional Parsi wedding comes to a delightful end with the reception party hosted by the groom’s family. Also, the mother of the groom repeats the achumichu ritual on the arrival of the couple back home.

India with its diversities in languages, people and cultures has one of the largest number of regions and religions in the world, all with their own distinct wedding rituals. Parsi wedding rituals are also one of them and are quite different from the other traditional Indian Hindu marriage customs. We hope you loved reading about all the traditions.