Weddings in Assam are humble and rooted. Their wedding rituals are one of a kind. Here are some of the amazing wedding rituals of an Assamese wedding, which will make you want to attend one right now!

The seven colours of the rainbow will render less for once, if we sit to describe India's diverse culture in terms of colours. And when it comes to Indian weddings, they are a whole fest of varying traditions and customs. Different cultures have different wedding rituals, but one thing that unites them all is that each one of them is equally beautiful and diverse in its own way.

Weddings in Assam are humble and rooted. Their wedding rituals are one of a kind. Here are some of the amazing wedding rituals of an Assamese wedding that will encourage you want to attend one right now.

This Couple's Varmala Fight Video Is Going Viral And To Know Who Won, Check This Out

Dhirubhai Ambani's Grandaughter, Married In The Jewellers' Family, Wore A 'Chooda' Made Of Diamonds 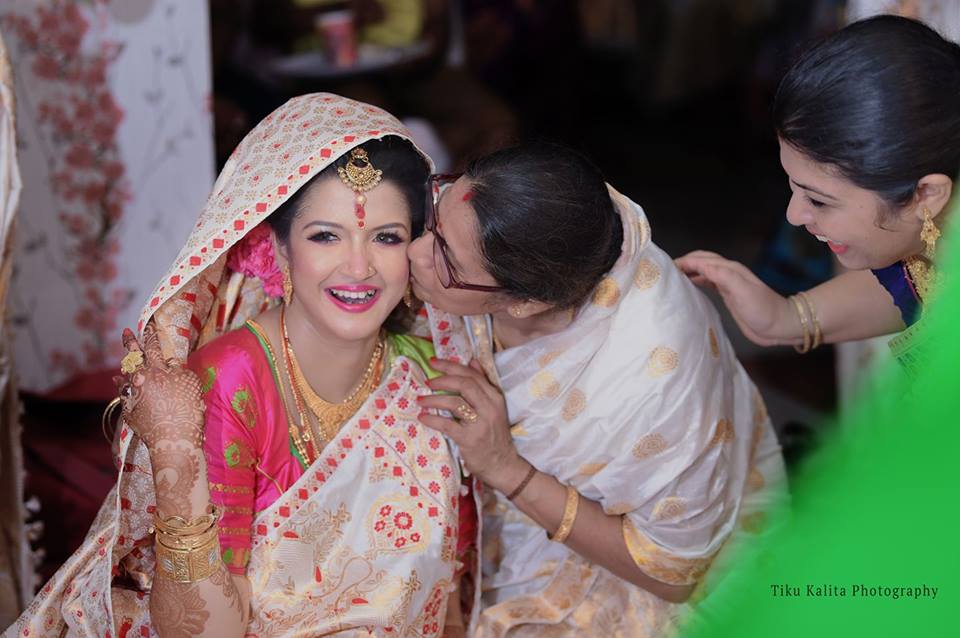 Just like a bridal shower, juran is a pre-wedding ritual in which the bride is pampered with love and gifts. The groom’s mother comes to the bride’s place along with her female relatives while singing wedding songs called biya naam. They are warmly greeted by the mother of the bride, holding a bell metal utensil called xorai in her hand. The mother of the groom gives the bride Pan and Tamul (betel leaves and nuts), and a Gamusa (a traditional Assamese cloth mostly in white with red thread embroidery). Everything that is given to the bride is first touched by the groom.

Importance of Juran ceremony in an Assamese wedding 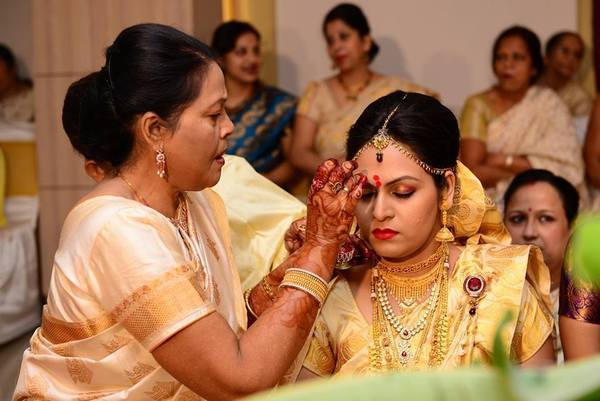 Juran ceremony has a significant place in a traditional Assamese wedding because, during the ceremony, the groom's mother gifts the wedding trousseau to the bride. Tel Diya is a part of the juran ceremony. In this, the mother-in-law puts a betel nut on the bride’s head and pours oil on it three times. She then puts vermillion on her head. She is also given the rest of the items like coconuts, fishes, sweets and two earthen pots, which the bride accepts by touching them. She then seeks blessings from the elders of the groom’s family. The most beautiful part of this ceremony is when the mother of the groom gifts something special to the mother of the bride to show gratitude to her for bringing up a beautiful daughter.

Ceremonial bath of the couple in an Assamese wedding 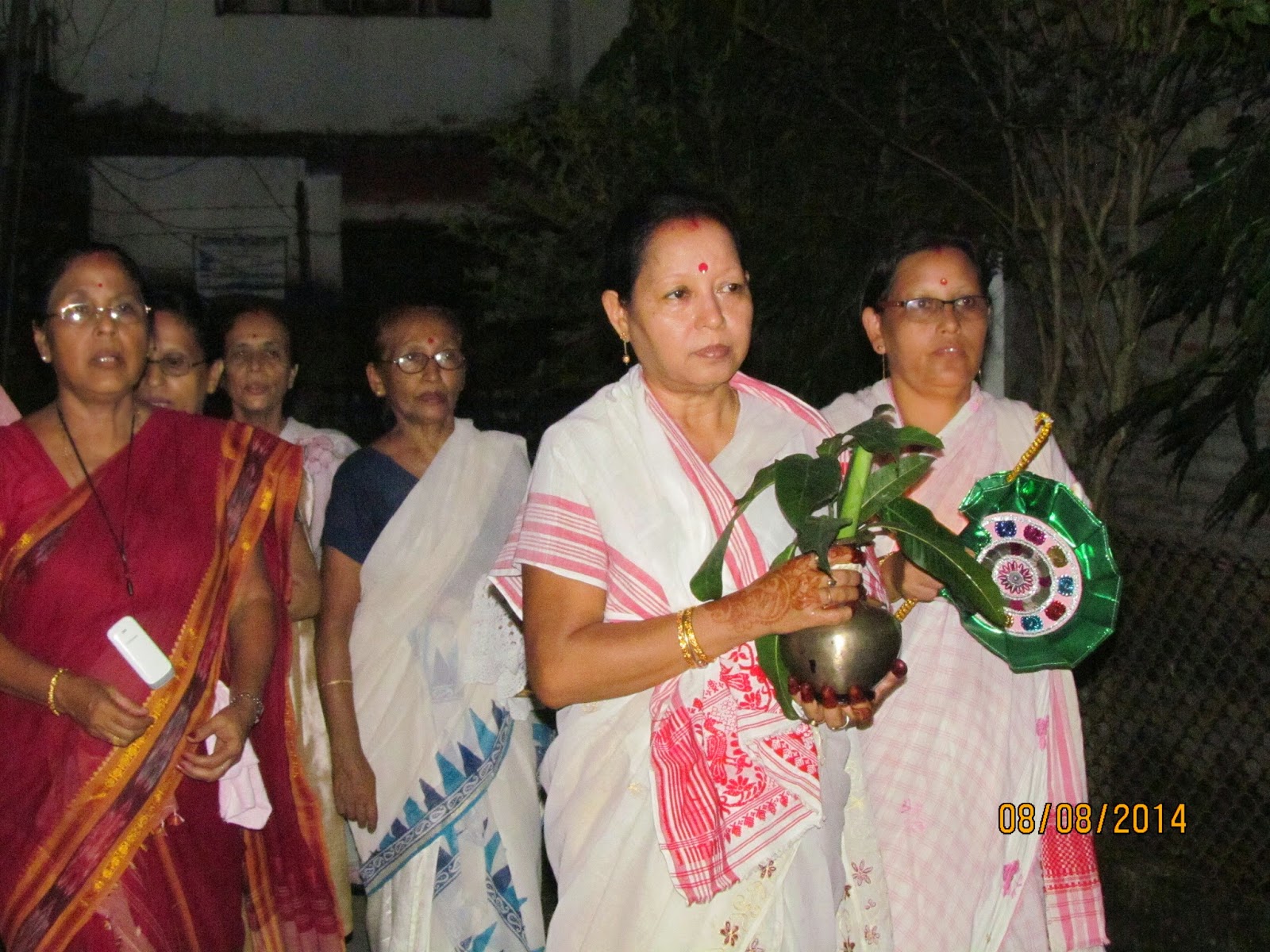 This is a ceremony that is performed in both houses separately and is known by the name, Pani Tula. The family members of the bride and the groom visit a nearby pond to collect water for the ceremonial bath of the couple. The mother of the groom and the bride carry a lighted lamp over a heap of rice, a pair of betel nuts and leaves, a coin and a knife. Before the ceremonial bath, the groom and the bride are given the coins, which are to be kept safely by them and the knife is tied to the scarf, which they are to carry with them until the wedding gets over.

Don't Miss: Sacred Rituals Of An Indian Muslim Wedding Are So Much Fun; List Of Pre And Post Wedding Functions

Haldi Ceremony in an Assamese wedding It is the ceremonial bath of the bride and the groom at their respective places, known by the name, Nuoni. It is similar to the Haldi ceremony in North India. They sit on a special seat created with four young banana plants. Oil, curd and a paste of urad lentils and turmeric are applied on the head of the to-be married couple and finally, the sacred water is poured on their heads.

Last meal of the bride and groom as singles 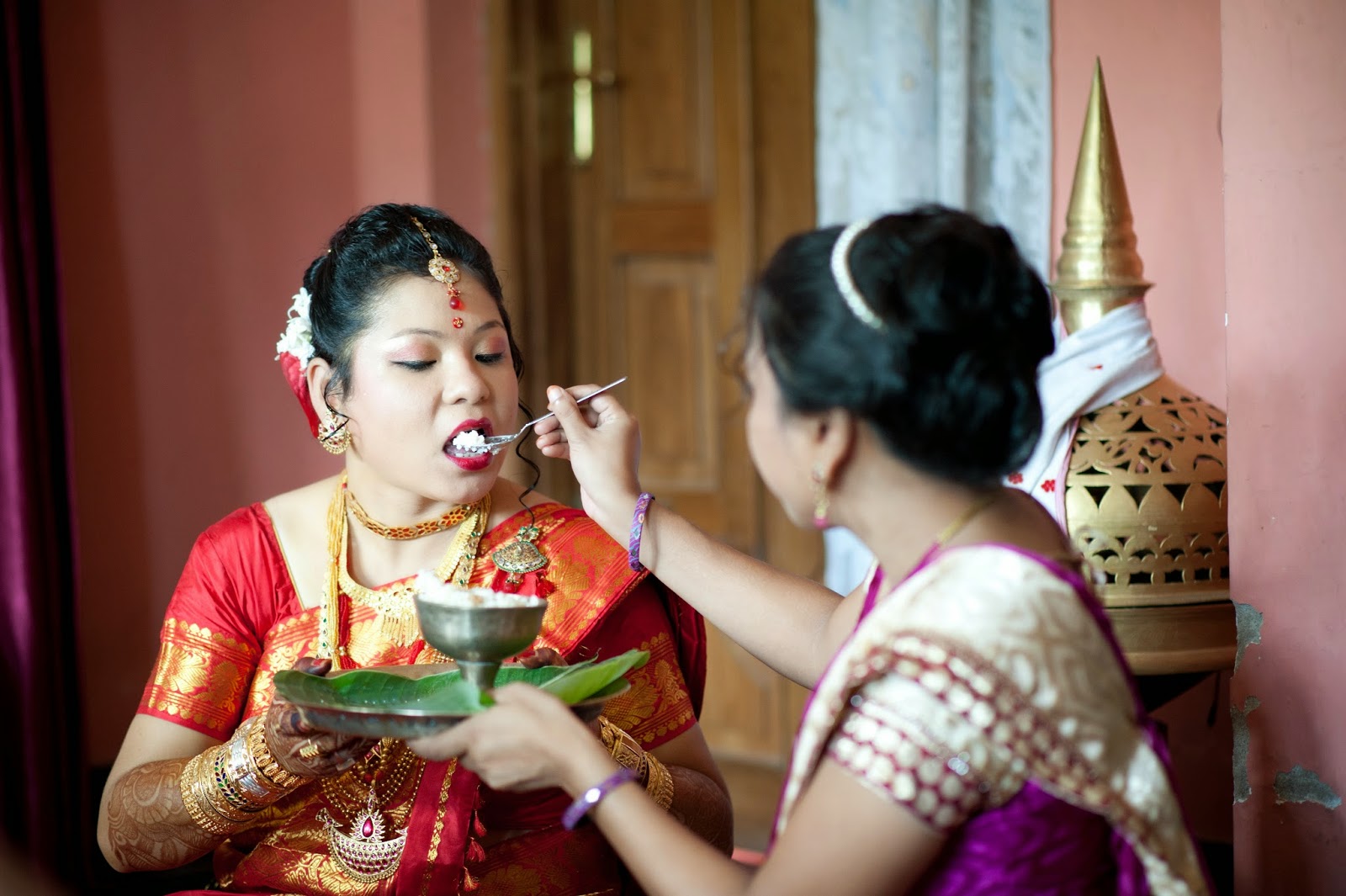 This is a very beautiful ritual called Daiyan Diya. It is performed in the early hours of the wedding day. Curd is sent to the bride from the groom’s side. She eats half of it and sends the other half back for the groom to eat. It is done for good luck. It is also the last meal for both of them as singles. 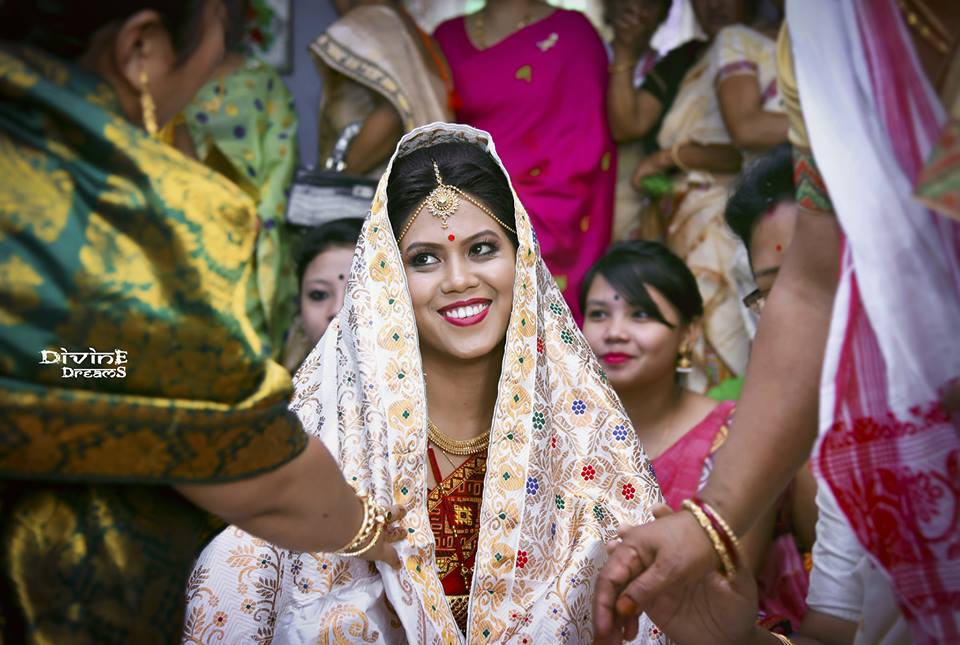 The bride’s reception takes place before the wedding ceremony. She dresses up and is seated on a decorated bell-metal plate with saunf in her hands to greet the guests. When the groom is about to enter the wedding venue, she is taken inside where she changes her clothes and wears her wedding attire. This is a very fun ceremony, which is performed at the groom’s place. When he is ready to leave for the wedding, his mother tries to stop him from entering, using a cloth. He has to peep through between the door and the cloth thrice after which he is allowed to leave. He takes the blessings of his mother, who will not be participating in the rituals, and then leaves for the wedding along with his friends and relatives.

Also See: 8 Fantastic Ways For Indian Grooms To Make A Grand Entry In Their Wedding

Welcome of the groom in an Assamese wedding 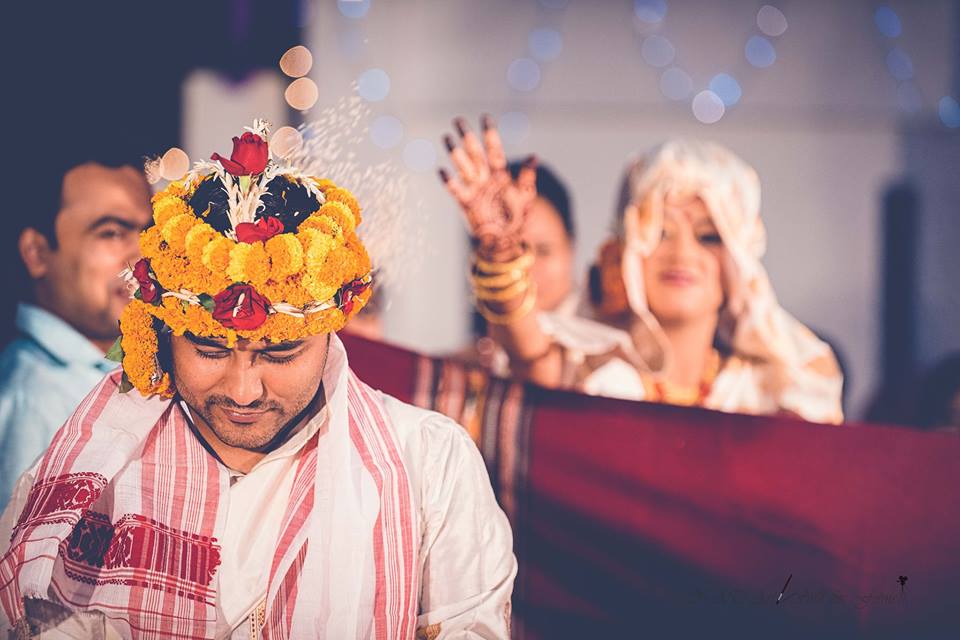 This is a fun ritual called, Dora Aaha. Once the groom reaches the wedding venue, he is showered with rice grains. There is a sweet competition between the bride and the groom’s side, where the groom’s best man tries to protect him using an umbrella when the bride’s relatives throw rice on him. The groom is then received by the mother of the bride, who welcomes him by giving him kisses on his cheeks. in another ritual called, Bhori Dhuwa, in which, to give respect to her jiju, the younger sister of the bride washes the groom's feet. He then has to pay a hefty amount to her so that she can allow him to go to the wedding altar. The brother of the bride then carries the groom inside. Also Check: 10 Promises Every Jiju Should Make To His Saali

Post-wedding games in an Assamese wedding Once the bride and the groom have exchanged the garlands and taken the saat pheras, they participate in post-wedding games known as khel dhemali. The friends and the families of the couple hide a ring in a bowl of rice for the bride and the groom to find it. Whoever finds the ring first is believed to have the upper hand in the marriage.

The bride's Vidaai in an Assamese wedding This ceremony is performed right before the vidaai and is called, Maan Dhora. The groom touches the feet of every elder of the bride’s family and shows his gratitude by gifting them some clothes. In return, the elders shower him with blessings in the form of gifts. 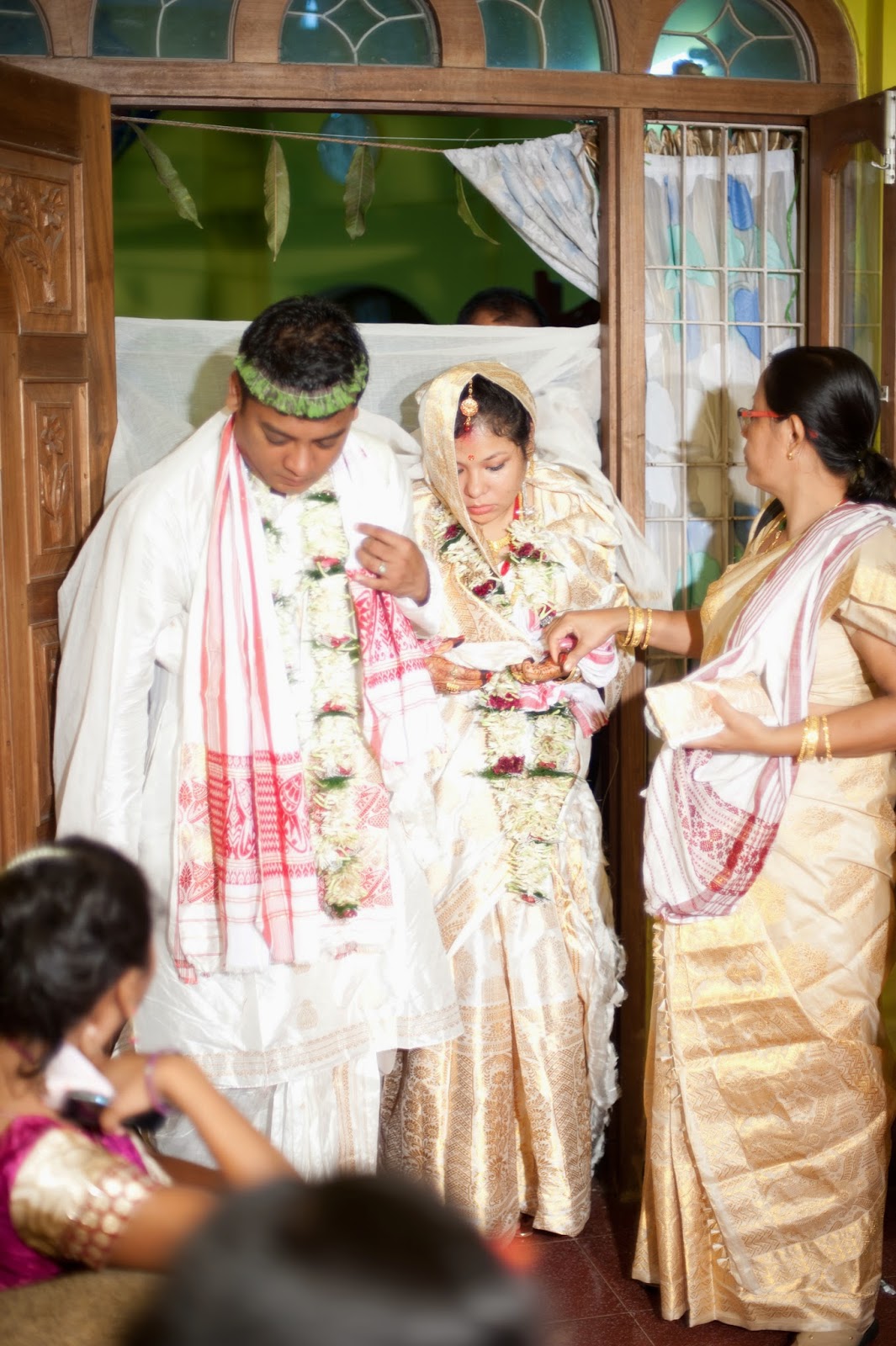 After the vidaai, the bride is welcomed to the house by her in-laws with a warm heart in a ceremony called, Ghor Ghosoka. Her feet are washed and she breaks an earthen lamp, known as saaki, before she enters her new home. She is then taken to the prayer room and is offered curd.

Recommended Read: In One Of The Parsi Wedding Rituals, The Bride And The Groom Throw Rice On Each Other