Priyanka Chopra Jonas is a diva, who knows how to rock every look with elegance. Recently, she stepped out in a shimmery dress worth more than 2 lakhs, looking gorgeous. Check out!

Priyanka Chopra Jonas has time and again, proved that she is a global icon. She has managed to steal millions of hearts with her acting prowess and chic fashion sense. Needless to say, Priyanka Chopra is a fashionista who surely knows how to impress the fashion police with her outstanding sartorial fashion choices. Be it wearing Indian traditional outfits or high-end designer clothes, the actress never fails to make a statement.

The Desi Girl of Bollywood has often awestruck us by the way she carries herself, acing every look. She can slay in anything and everything! Moreover, sometimes, the cost of her outfits burn a hole in our pockets. And it would be an understatement to say that Priyanka's globe trotter aesthetic and her love for the desi style, serves inspiration to all. On November 23, 2021, Netflix dropped a show, the Jonas Brothers Family Roast, which was dedicated to the Jonas Brothers, Nick Jonas, Joe Jonas and Kevin Jonas. Several comedians and the singers' wives graced the show and roasted them leaving the audience to go ROFL. Priyanka Chopra Jonas took to her IG handle and shared a glimpse of her performance on the show, and wrote:

One thing that caught our attention was the gorgeous dress that the actress was wearing. In the video, Pee Cee can be seen enjoying her stage life, roasting her husband in a stunning one-piece. The actress was decked up in shimmery deep gold and black body-hugging dress with a slit. She completed her look with wavy curls and metallic heels. While the dress itself was amazing, Pee Cee rocked it like anything. 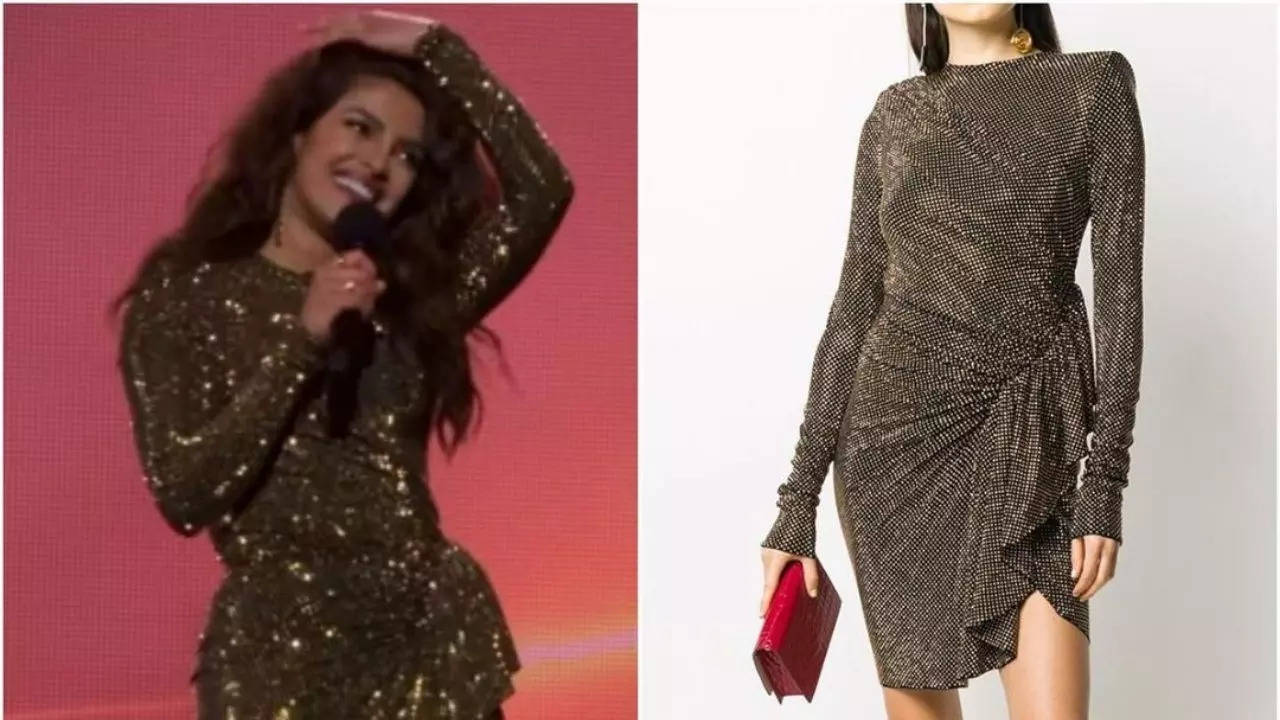 Upon doing a little research we found that Priyanka Chopra's outfit is from the French haute couture label, Alexandre Vauthier. On the designer's website, the dress is priced at a whopping amount of USD 3,329, which after converting to Indian currency is approximately Rs. 2,47,495. Check out the cost of the dress below.

A few days back, Priyanka Chopra Jonas was caught up in the promotions of her upcoming film, The Matrix Resurrections. Before kickstarting the promotions, the actress had taken to her IG handle and had shared a video featuring happy photos of herself. In the video, Priyanka could be seen wearing a green pencil dress, which she had paired with tangerine heels. Along with the happy video, Priyanka had written:

The actress' stunning look had caught our attention, and we were curious to find out the cost of her outfit. Priyanka's green pencil dress was from the designer, David Koma. On the designer's official website, it was mentioned that the dress comes with a price tag of $695, which converts to Rs. 51, 562. Check it out below:

Once Priyanka Chopra Jonas was spotted walking hand-in-hand with her hubby, Nick Jonas, and her beautiful Versace dress had become the talk of the town. She had paired her Barocco Rodeo's printed dress with a black blazer, black heels and a bold red lipstick. According to a report of India Today, the cost of Priyanka’s Versace dress with a plunging neckline and thigh-high slit was Rs. 1,03,581. 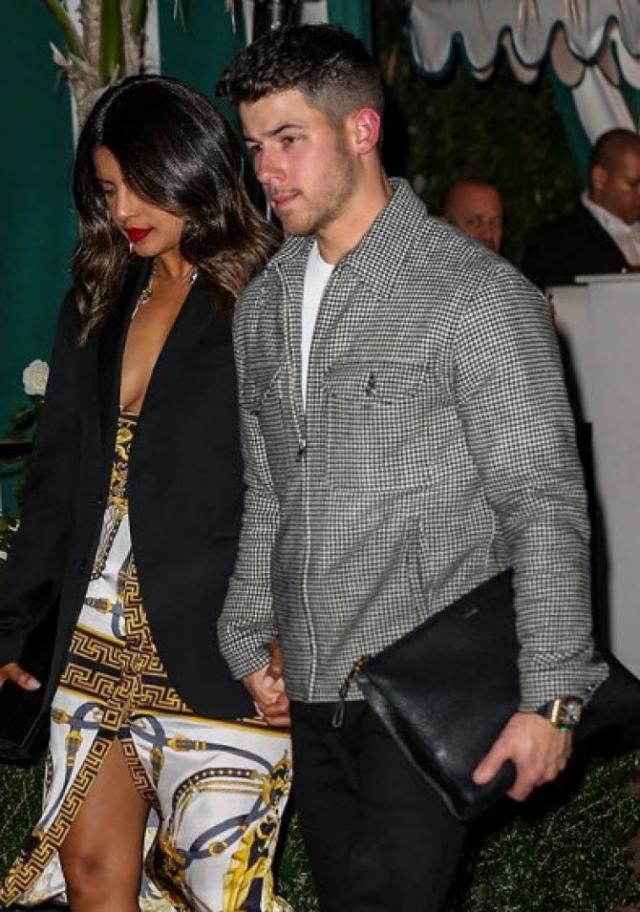 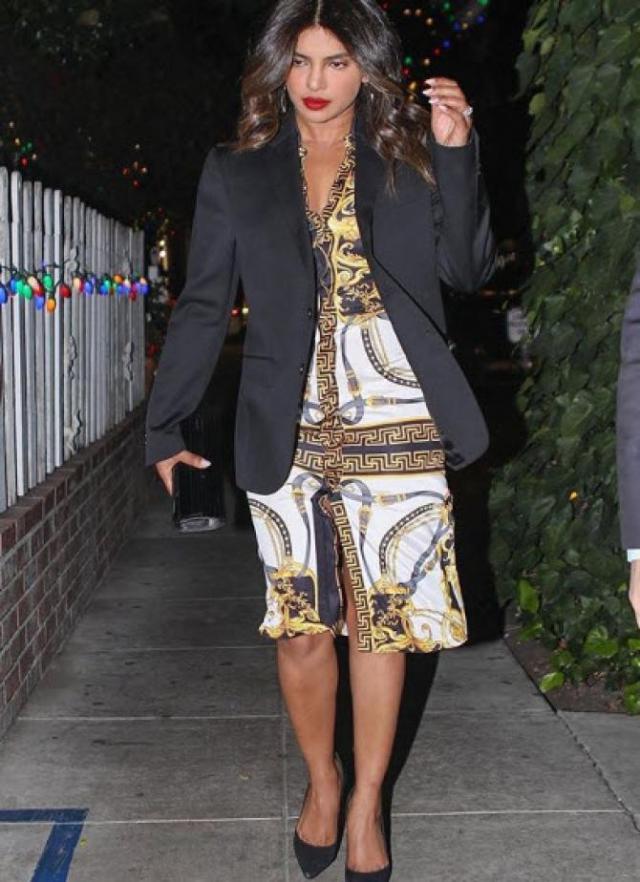 In August 2020, Priyanka had shared a picture on her IG handle, and her gorgeous pink shirt had caught our attention. The collared baby pink-coloured silk shirt had puffed sleeves, and she had accentuated her look with the gold hoops. Well, the shirt was from the brand, Lisou London, and it costs around 250 pounds, which converted to approximately Rs. 25,000. 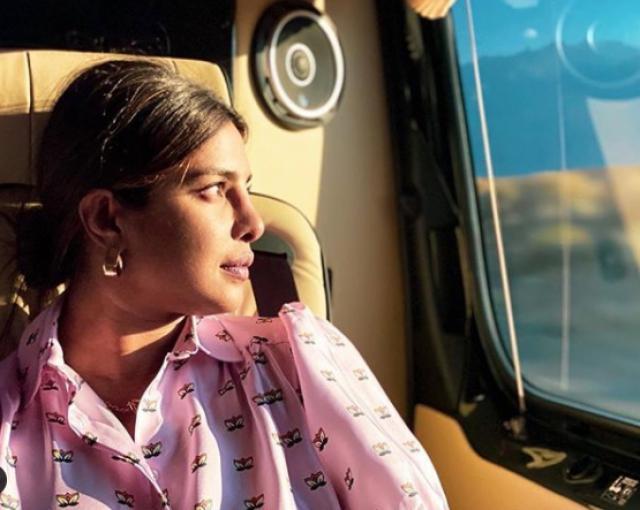 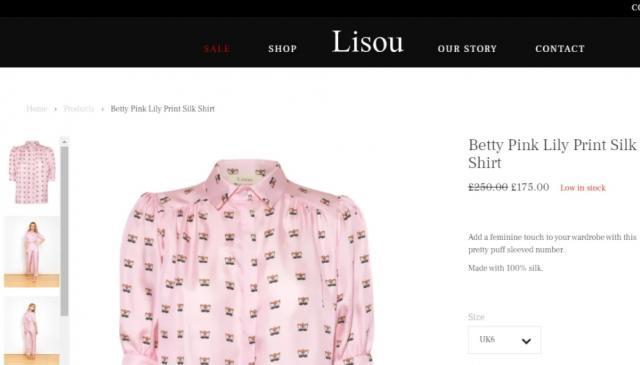 Don't miss: Priyanka Chopra Jonas Looks Gorgeous As Ever In A Green Pencil Dress Worth Rs. 50,000 Bollywood actress, Priyanka Chopra Jonas has inspired everyone with her success in Hollywood. Along with it, the actress has made our nation proud many times by standing up for underprivileged people worldwide. From being in the headlines for her incredible performances in movies and web series to being adored and respected