One Day Cost Of Priyanka Chopra-Nick Jonas Wedding Venue Umaid Bhavan, Will Give You A Mini Attack

One Day Cost Of Priyanka Chopra-Nick Jonas Wedding Venue Umaid Bhavan, Will Give You A Mini Attack 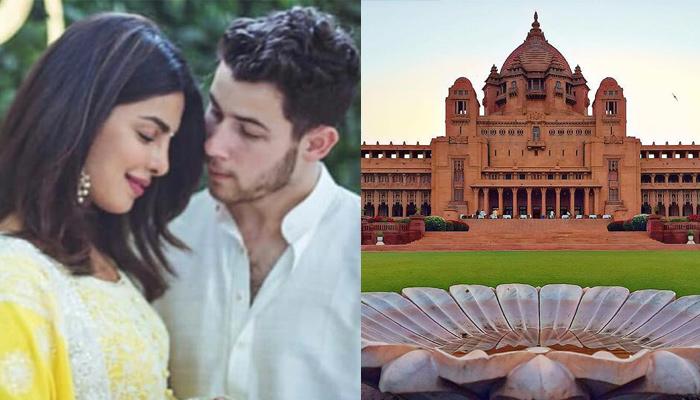 2018 is indeed a year to remember right? Most of our A-listed actresses- Sonam Kapoor, Deepika Padukone entered the bond of holy matrimony, while Priyanka Chopra is all set to join the league soon! The storm of Deepika Padukone and Ranveer Singh’s getting married has hardly sunk in, when the weather’s becoming a little clearer, all set to prepare itself with another cyclone for Priyanka Chopra and Nick Jonas’s December 2018 wedding! (Do Read: Brent Goble Turns Teacher To Aashka Goradia In Maldives Ahead Of Their First Marriage Anniversary)

Unlike DeepVeer’s Italy destination wedding, Priyanka and Nick will have an in-house wedding in Jodhpur’s magnificent Umaid Bhawan. A source was quoted as saying, “Nick and Priyanka were recently in India and had even gone to Jodhpur. That was when they decided the gorgeous Umaid Bhawan to be their dream wedding venue. They will have a limited guest list of 200 people with only their close friends and family in attendance. Since lot of their Hollywood friends are settled in New York, PC is quite excited to have her bridal shower there followed by a grand wedding in Jodhpur.” Checkout a picture of PeeCee's wedding venue:

Beautiful beyond words, right? The latest update that we will give you is all set to send you into a mini-frenzy! Why? Nickyanka (as fans fondly call the couple) are all set to tie the knot on December 02, 2018 at Umaid Bhawan but guess how much the couple will shell out for the same? As per reports, a single night stay at the Umaid Bhawan costs something around 60,000 dollars, which is equivalent to Rs 43 lakhs as per Indian currency! If a single night-stay costs Rs 43 lakh, you can totally figure out the total expenditure! Guys, don’t forget to release your breaths after reading this!

Looks like PeeCee is personally looking after every minute detail of her wedding. As per a recent update, our Desi Girl will personally visit Umaid Bhawan prior to her wedding with her in-laws, to ensure that her wedding preparations are in place and all set for her D-day. Amazing, right? (Must Read: Deepika Padukone-Ranveer Singh's Hilarious Memes Created By Fans Will Make You Laugh Till You Drop)

With their wedding all scheduled to take place on December 02, 2018 in Jodhpur, reportedly, Nickyanka have registered for their marriage license at the Beverly Hills Courthouse located in California. The couple was spotted there last week before PeeCee left for her bachelorette in Amsterdam. As per a report in San Francisco’s periodical, The Blast, Nick and Priyanka will get the license with them for their Indian wedding. The couple will also file for a license in America, post their Indian wedding which will be valid in the US!

Don’t you all want to know details about Nick and Priyanka’s wedding ensemble? It was reported, “Nick will wear ivory and Priyanka will be in red, while the bridesmaids will wear Ralph Lauren outfits for the Christian wedding because the couple wore the brand at their first public appearance together at the Met Gala last year. The festivities begin in the last week of November. They’re relishing every minute.”

Priyanka and Nick had earlier planned to get married only next year, but they preponed their wedding plans. What made them do so? American TV show Entertainment Tonight reported a source saying, “Priyanka and Nick were planning to get married early next year, but it now looks like they may tie the knot by the end of 2018”. The report could further be read as, “Since day one, Priyanka and Nick have clicked and have never taken their relationship slow. The couple got engaged two months after dating, they've met each other’s families and had a bridal shower and bachelorette party in a very short period of time. For Priyanka and Nick, they know that they love one another and are going to be married, so they don't see the appeal in waiting too long”. (Also Checkout! Isha Ambani's In-Laws Gift Her A 450 Crore Bungalow To Start Her Married Life With Anand Piramal)

With his wedding just round the corner, the Jealous star is all praises for his soon-to-be-wife, Priyanka! Speaking about his camaraderie, Nick stated in an interview with USA Today, “You have to be honest with your other half. That’s where the beauty of a real relationship is, being able to be your authentic self. I have that in my life now.” He further stated, “It’s really about trying to keep as much time as you can for yourselves. Not letting the outside world penetrates the world that you create for each other, or the world with your family and friends and your inner circle.”

How excited are you to see PeeCee and Nick in their wedding avatar? Let us know in the comments section below.