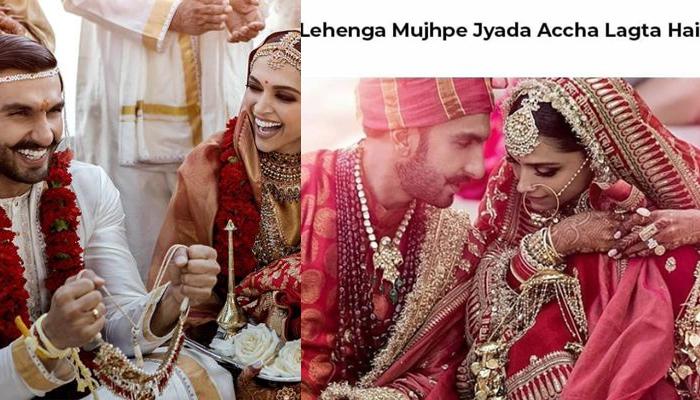 Just imagine: You have been hurt badly in the hands of love and almost come in the verge of losing faith in it, when a knight comes in a shining armour to regrow your faith in love like never before. Such is the positive influence of the person in your life that you go ahead and make that person an integral part of your future by marrying him! Sounds magical, isn’t it? Such is the love story of Deepika Padukone and Ranveer Singh. (Do Read: Deepika Padukone’s Wedding 'Chooda' And 'Kalire' Had A Unique Traditional Yet Elegant Touch)

Seriously, who’s luckier in this case is hard to apprehend. Quite like us, did you too, go in for a momentary frenzy when a post from Deepika and Ranveer’s Instagram account made netizens go crazy? Sharing an official statement on their marriage, the post could be read as, “With the blessings of our families, it gives us immense joy in sharing that our wedding is set to take place on the 14th and 15th of November, 2018.” Further thanking their fans, the couple wrote, “We thank you for all the love that you have showered upon us over the years and seek your blessings as we embark on this incredible journey of love, loyalty, friendship and togetherness. Lots of love, Deepika and Ranveer.”

November 14-15, 2018 came and went by and we still hadn’t caught a glimpse at DeepVeer’s picture, until yesterday evening (November 15, 2018). Sharing two stupendous pictures, Deepika and Ranveer nailed it in their Sabyasachi apparels and looked heavenly. Isn’t it? Celebrity hair stylist, Nitasha Gaurav revealed the first words that Ranveer Singh's father, Jagjit Singh Bhavnani said to his bahu immediately after the wedding. As per an Instagram story posted by Nitasha, the golden words that came out of Bhavnani Senior's mouth were, “Ye Deewani to Bhavnani ho gayi!”, which she wrote atop DeepVeer's wedding picture. Here, take a look at the same:

Can’t stop laughing, right? Ever since the ravishing newly-weds posted the first-ever pictures from their wedding, netizens couldn’t keep calm! Innumerous fans posted hilarious memes of Deepika and Ranveer which will make you go all ‘rolling on the floor’ with laughter! In case you need to set your weekend mood straight, take a look at some of the memes dedicated to DeepVeer below: (Also Read: Katrina Kaif Wishes Deepika Padukone On Her Wedding, Though She Was Dropped Out Of The Guest List)

A crew member from the sets of Bajirao Mastani revealed some intricate behind-the-scene moments of the couple to Huffington post. The source shared that Deepika and Ranveer would make every possible attempt to be with each other when work kept them apart. Also, the Dil Dhadakne Do star would stay on the sets of Bajirao Mastani, waiting for Deepika even when his shot got over! The source revealed, “He's always giving her cues even when he doesn't have to. It almost feels that for him, her career is more important than his. He was one of the first few people to tell her that she needs to go to Hollywood. He's starry-eyed when she's around.”

The source further added, “It was new love- euphoric and maddening. They'd call each other baby, eat together, and disappear into their vanity vans when not shooting.” Onlookers thought that Deepika and Ranveer would fall apart when Bajirao Mastani’s shoot got over, but this time it was something different. When the film became a superhit, a source stated to a publication, “When I saw them during Bajirao Mastani, that's when I knew, this is something that's going to last.” Another source added that even during group dinners, their love-struck eyes for each other would not go unnoticed by people and shared, “It's like nothing else matters. And they talk about everything non-stop, like, say, a married couple would.”

In a throwback interview, Ranveer was asked about the whole idea of romance in modern times, to which he shared, “I do find the current scenario strange. I was born in 1985 so I’ve seen a kind of miniature revolution in how interpersonal relationships are. There was a time when there was none of this technology and relationships dynamics were different. That being my foundation, yes, I am very traditional when it comes to romance. And the idea of romance. Maybe perhaps I was born more recently and Facebook and Snapchat were more prevalent, I would have a different idea. But having been born in an era where there weren’t even mobile phones, that make my idea of romance very, very traditional.” (Don't Miss! Here's The Cost Of Square-Cut Solitaire Engagement Ring Of Deepika Padukone Gifted By Ranveer Singh)

How did you find the DeepVeer memes and which one did you like the most? Let us know in the comments section below.