Rohit Sharma is a right-handed batsman in the Indian cricket team. He had gotten married to his longtime girlfriend, Ritika Sajdeh in December 2015. Let's take a look at their magical love story.

Don’t we all cherish it, when love blooms between two hearts in the most unexpected places? Yes, we all do! The office romance is certainly what we all love the most as it often begins with hatred and ends up with a relationship worth cherishing forever. Rohit Sharma and Ritika Sajdeh’s love story is of similar sorts as they serve us a saga worth learning more about. He is a star batsman of the Indian cricket team and she is his better half, always by his side, earlier as his manager and now as his wife.

We are talking about the very handsome, right-handed batsman, Rohit Sharma and his pretty wife, Ritika Sajdeh. Their love story is full of young romance, a long courtship period, followed by a fairytale proposal and star-studded wedding. Let’s take a look at their filmy love story! Rohit Sharma was born on April 30, 1987, in Nagpur. He is a right-handed batsman, who plays for the Indian cricket team on the international level. He is also the vice-captain of the Indian national team in the limited-overs format. His father was a caretaker of a transport firm storehouse and because of his low income, it was his grandparents, who raised him. It was in 1999 that Rohit had joined a cricket camp, however, it was in July 2006 that he had made it to the Indian cricket team. Since then, the cricketer has many accolades to his name and has a net worth of approx. Rs 160 crore. Ritika Sajdeh was born on December 21, 1987, and is a sports event manager by profession. The gorgeous lady used to look after the players and their brand endorsements and contracts, until she fell in love with Rohit Sharma. After their wedding, the lady has been managing only her darling husband. Ritika has a net worth of approx. Rs 15 crore. 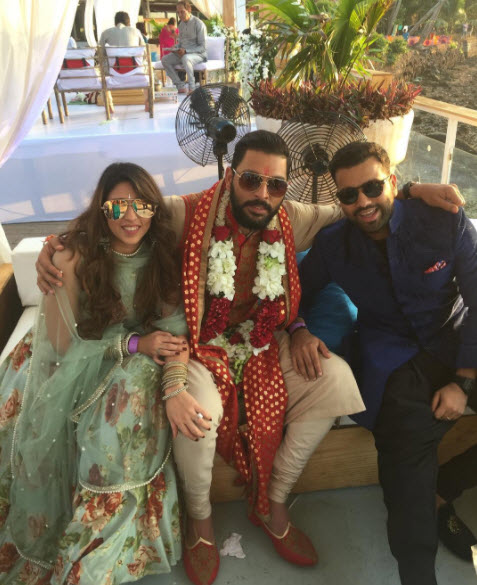 Ritika, who is a sports event manager, is also the rakhi sister of the cricketer, Yuvraj Singh. Rohit Sharma had met Ritika Sajdeh for an ad shoot and was warned by Yuvraj to maintain a safe distance from her. While earlier, Rohit was not very fond of Ritika, later, the duo got to know each other better and after a while, the two had started dating. Before getting hitched, they already knew each other for good six years. Rohit and Ritika had met as professionals. Ritika is a sports event manager and she used to take care of Rohit’s cricket engagements as his manager. After dating each other for six years, Rohit had decided to surprise his ladylove with a grand proposal. Rohit had proposed Ritika at a place that holds a lot of importance in his life. He had gone down on his knees, with a solitaire ring in his hand, and had popped the question to her at the Borivali Sports Club, Mumbai. It is the same ground where he had started his career at the age of 11. Ritika, surprised by this gesture, had accepted the proposal and had said yes! He had posted a picture of the two with a tweet saying: The lovely couple, Rohit Sharma and Ritika Sajdeh had gotten engaged on June 3, 2015. After announcing their union, later, Rohit had hosted an engagement party, where he had officially exchanged the rings with his then-girlfriend, Ritika Sajdeh. The couple is said to have exchanged rings at the Borivali Sports Complex in Mumbai and the ceremony was attended by Bollywood actor, Sohail Khan as his wife, Seema Khan is Ritika’s first cousin. 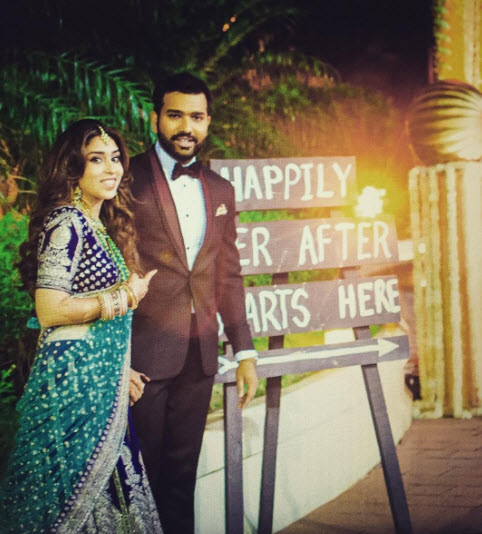 Rohit Sharma and Ritika Sajdeh’s marriage date was decided as December 13, 2015. It was a star-studded wedding that had taken place in Mumbai’s Taj Lands Hotel. Their grand wedding was attended by who’s who of cricket world, Bollywood and business world. 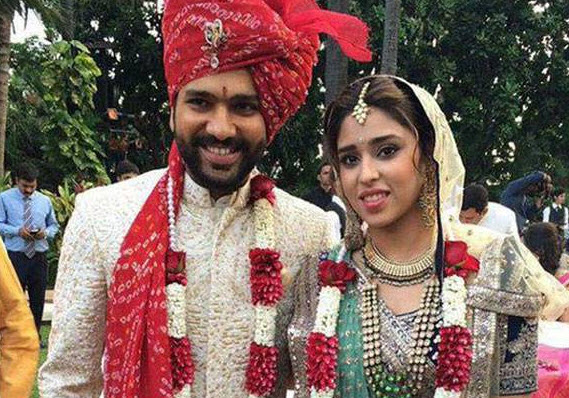 To celebrate their wedding, Ambanis had thrown a grand party for the couple before their wedding. It was attended by the big shots of the nation. The entire cricket team was seen having a blast at their wedding functions. For the wedding, Rohit had looked stunning in an ivory sherwani, teamed with a red pagdi, while Ritika had made for a stunning bride in off-beat shades of blue coloured lehenga. The glittery wedding was one of the most happening celebrity weddings. Rohit Sharma and Ritika Sajdeh had kept their first pregnancy under the wraps until she had shared some blurry party night pictures on her social media handle. In the pictures, Ritika was seen wearing a loose white dress, which she had teamed with a denim jacket and sling bag. And in those pictures, Ritika was seen flaunting her cute baby bump. However, there was no confirmation from Ritika and Rohit about the same, but guess the pictures were enough to announce the news of their pregnancy.

After 3 years of marital bliss, Rohit Sharma and Ritika Sajdeh had welcomed a beautiful daughter into their lives on December 30, 2018. Rohit had shared the first glimpse of his daughter with his fans and had captioned it as:

The cricketer had returned from the India-Australia Test series to be with his wife and newborn daughter on December 31, 2018. 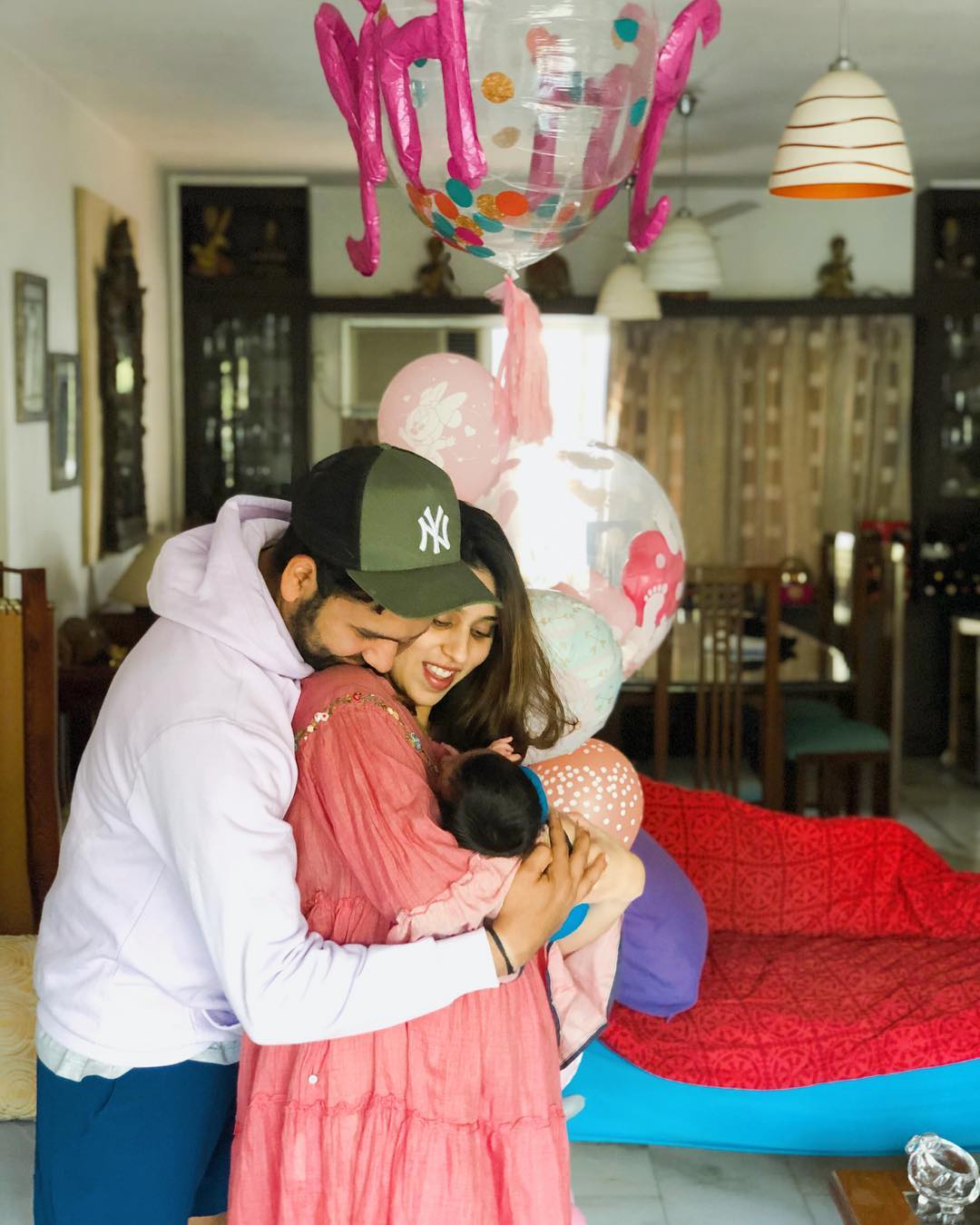 Rohit Sharma and his wife, Ritika Sajdeh had taken a few days to announce the name of their little princess. It was on January 6, 2019, when Rohit had revealed his daughter’s name to the world. The right-handed batsman had taken to Instagram to share an adorable family picture with his wife, Ritika and their daughter and had captioned it as: It has been more than five years that Rohit Sharma and Ritika Sajdeh have been happily married. Ritika perfectly complements her hubby, Rohit. She is his constant support in all the highs and lows of life. She is always seen cheering Rohit during his matches.

When Rohit and Ritika had completed five years of marital bliss, the two had penned their heartfelt feelings for each other. Rohit had taken to his Instagram handle and had shared a series of cute pictures with the queen of his heart. 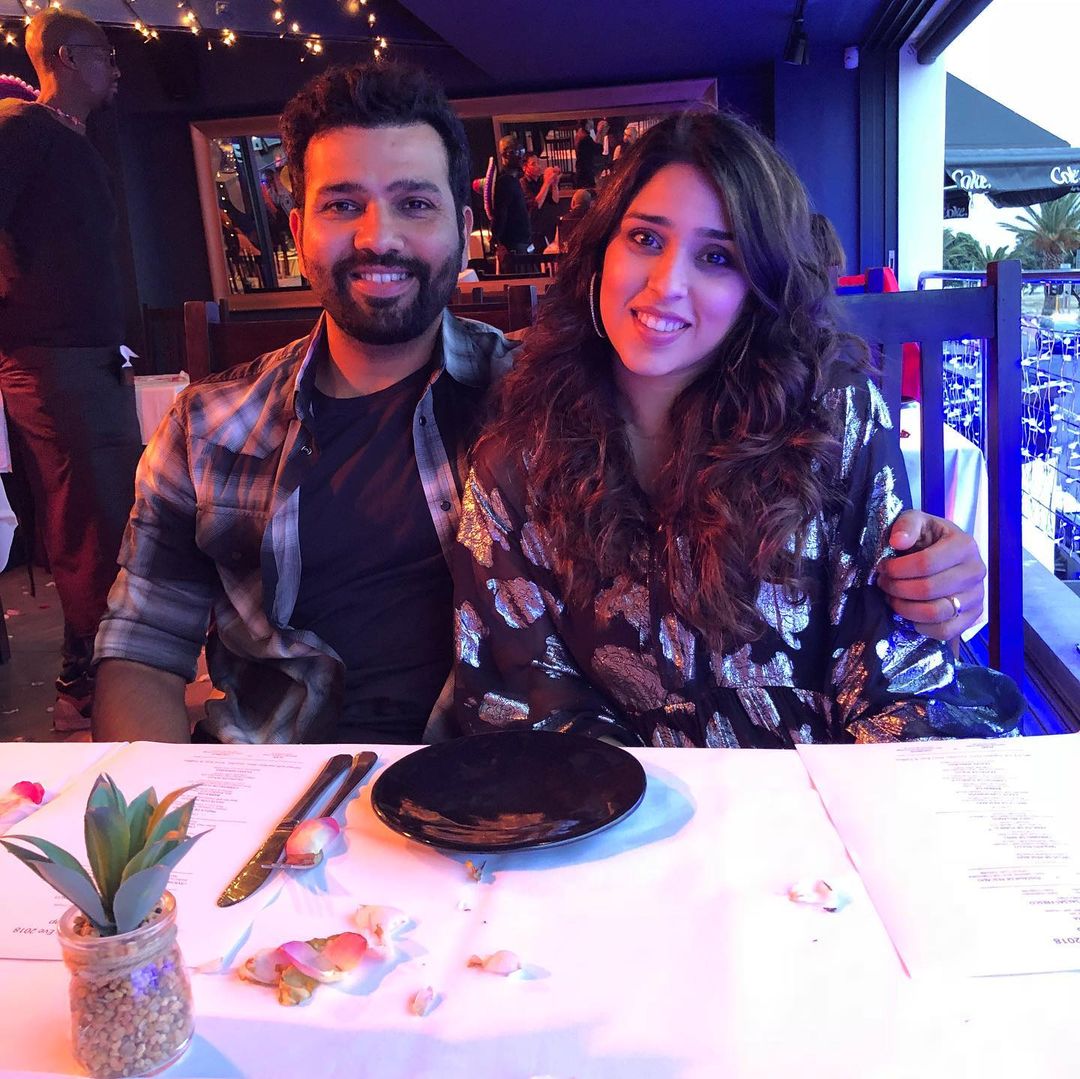 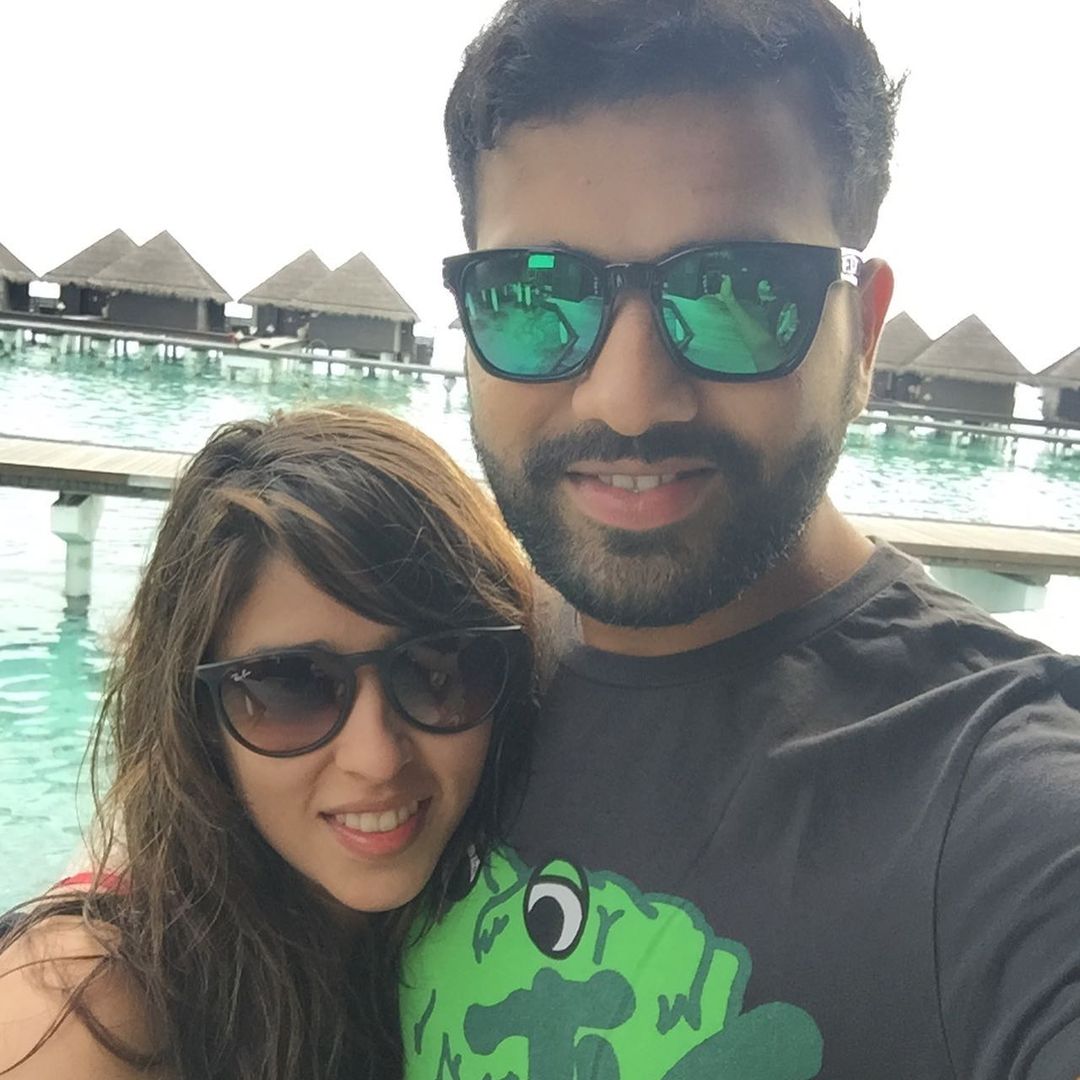 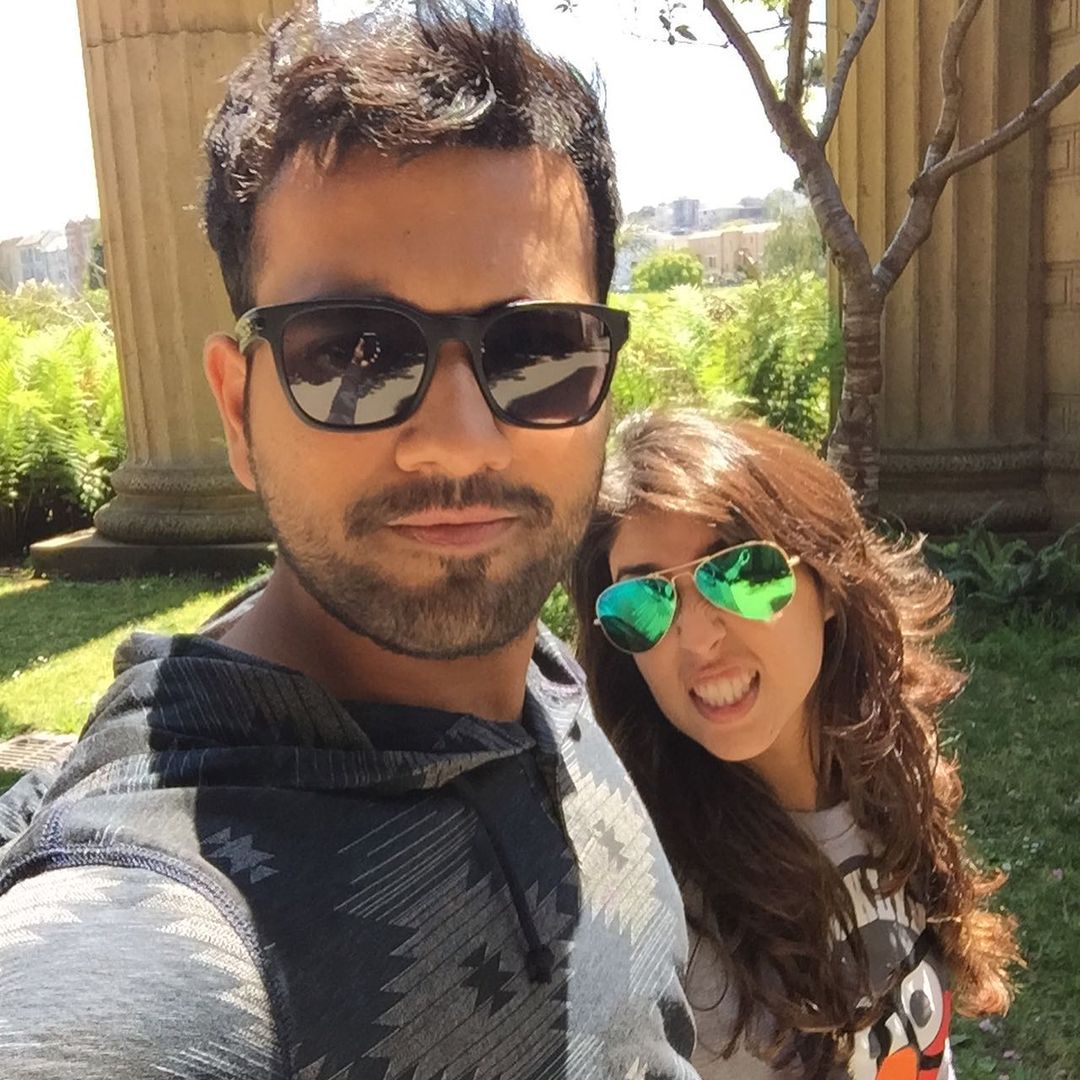 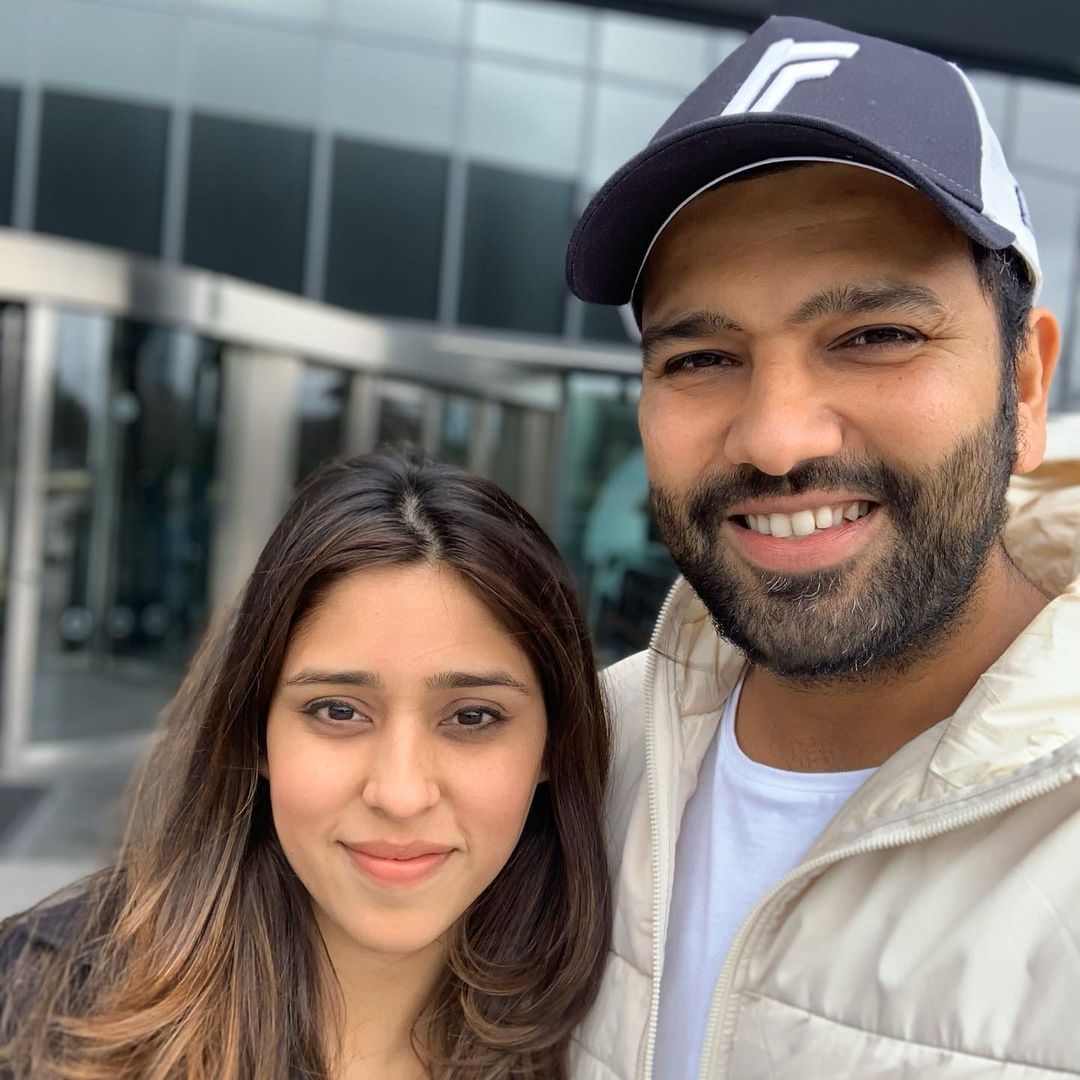 Alongside it, he had written,

"5 yrs of affection and we plan to stay not out till the end @ritssajdeh."

On the other hand, Ritika had taken a journey down the memory lane and had shared lovely pictures from her gallery with her hubby, Rohit. However, the best one was their family picture with their little girl, Samaira. 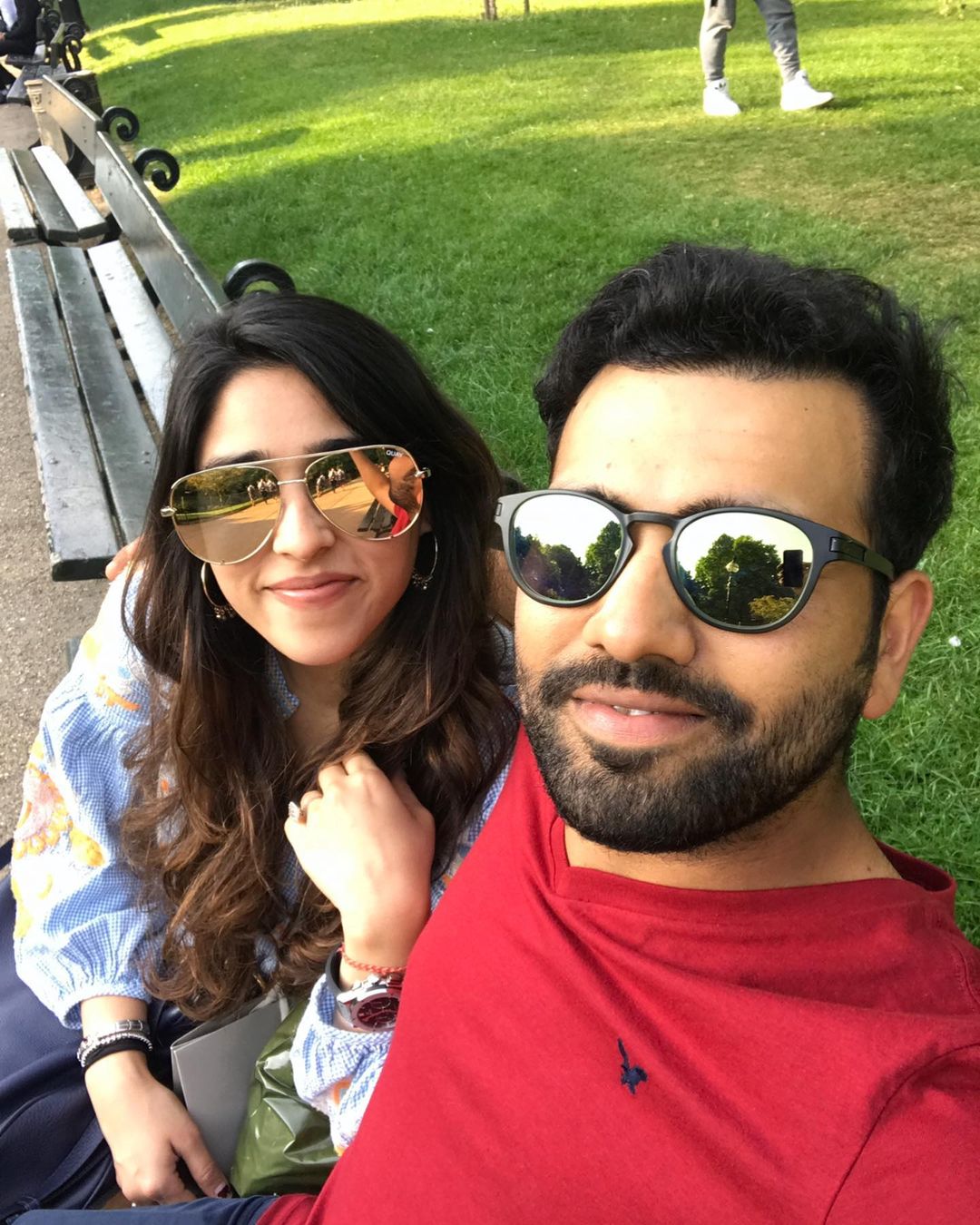 Along with it, she had written,

"Happy 5 my love @rohitsharma45 I call dibs on you for all our future lifetimes."

Rohit Sharma’s net worth and houses Rohit Sharma’s net worth is estimated to be 22 million USD, which roughly translates to Rs 162 crores. He is in the A+ Grade of the players and as specified by the BCCI, it pays him an annual salary of Rs 7 crore. He is paid a sum of Rs 15 lakh per Test match, Rs 6 lakh per ODI and Rs 3 lakh per T20I match he plays as a fee from the BCCI. The cricketer is said to be taking a whopping amount of Rs 15 crores to be a part of Mumbai Indians in the Indian Premier League (IPL). Other than his cricketing career, he has been endorsing 12 different brands and charges around 20 to 30 lakhs per endorsement. The cricketer, Rohit Sharma lives in a 6000 square feet apartment in the Ahuja Towers in Worli, which offers a 270 degrees view of the Arabian Sea. The well-furnished house is located on the 29th floor of the building and is estimated to be around Rs 30 crores. He also owns multiple real-estate properties across the country. Rohit Sharma also has a great car collection. His first car was Skoda Laura, however, now, for his day to day activities, he uses a Toyota Fortuner and occasionally uses a BMW X3. His dream car was BMW M5, worth Rs 1.5 crore, which is his prized possession. He also owns a Formula One version of BMW X3, which is quite popular among F1 fans. Rohit also owns a Mercedes and an Audi besides Nissan, the brand that he endorses.

Rohit Sharma and Ritika Sajdeh look damn adorable together and perfectly complement each other. He is a cricketer, she is a sports manager, fond of watching cricket. They are truly ‘best friends turned soulmates.’ With their daughter, Samaira adding to their lives, Rohit and Ritika make for a perfect fairytale. We wish Rohit and Ritika, a life full of happiness and love!

NEXT READ: 5 Famous And Talented Cricketers Who Married Their Cousins Or Friend's Ex-Wife