Mahendra Singh Dhoni is not just a name but the wave of the revival for Indian cricket, which brought world cricket to its knees and how! MS Dhoni had skyrocketed the stature of Indian cricket with speed greater than the blink of an eye, just like he stumps behind the wickets! His name will always be taken with pride and respect. Formerly known as 'captain cool', MSD is not just a legendary cricketer but a devoted family man as well. His beautiful wife, Sakshi Dhoni and their adorable little cutie pie, Ziva are immensely loved and cherished by MSDians. As charismatic and magical as MSD is, how can we expect his love story to be anything but iconic right?

All of you might have seen the love story of MS Dhoni and Sakshi in his biopic, MS Dhoni: The Untold Story directed by Neeraj Pandey, but there are still some hidden facts about the same, which you might not be aware of! But fret not, for we have brought you the complete details of the love story of that man who changed the face of Indian cricket.

Sakshi Dhoni Shares A 'Picture-Perfect' Caricature With MS Dhoni, Ziva, Their Pooches And His Bike

Sakshi and Dhoni knew each other since childhood as their fathers worked in the same company, MECON, in Ranchi. Both their families shared a cordial relationship, and the young buds went to the same school in Ranchi. But, as fate would have it, Sakshi's family shifted to Dehradun while they were still kids, and the two could not stay in touch after that, but destiny had something else planned. 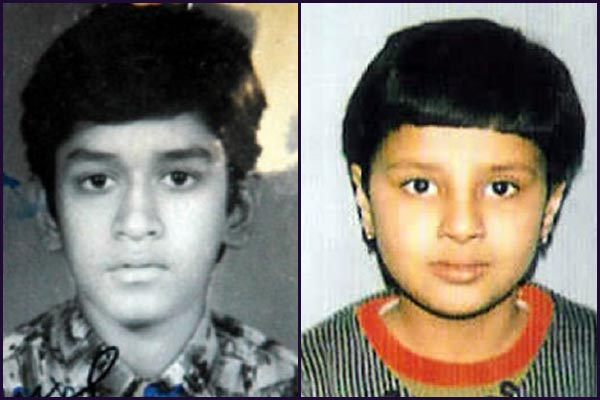 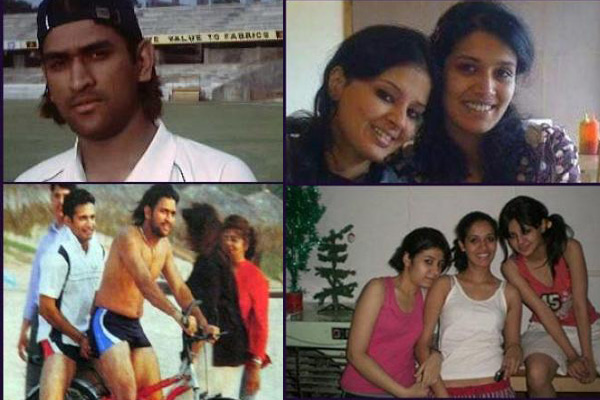 Born in Lekhapani town in Tinsukia district, Assam, to RK Singh and Sheila Singh, Sakshi Dhoni received her primary education at Welham Girls School in Dehradun and later completed her schooling from Jawahar Vidya Mandir in Ranchi. Did you know, Bollywood actress, Anushka Sharma was Sakshi Dhoni's classmate at Welham Girls school? Sakshi holds a degree in hotel management from the Institute of Hotel Management, Aurangabad. 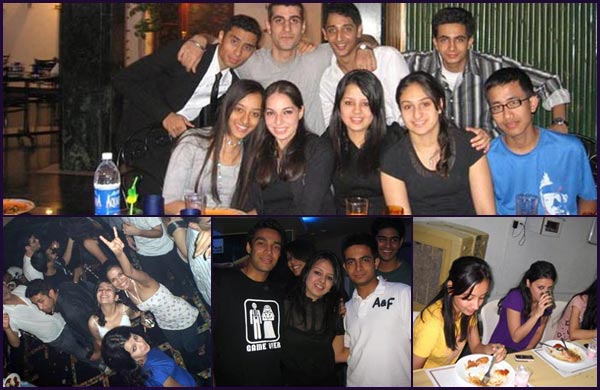 How did MS Dhoni and his wife, Sakshi's, meet?

And as destiny had it, MSD and Sakshi met after a gap of almost a decade, miles away from their home, in the 'City of Joy', Kolkata. It was during Team India's stay in Taj Bengal, Kolkata, in the months of November-December 2007. At that time, India was playing against Pakistan at the Eden Gardens. Before marriage, Sakshi Dhoni was a student of hotel management in Aurangabad, Maharashtra. She was interning with Taj Bengal, Kolkata, during Team India's stay there. On her last day of internship, she was introduced to MS Dhoni, by his manager, Yudhajit Dutta. Sakshi was friends with Yudhajit. MS Dhoni was stumped over her beauty and asked Dutta for her number and texted her.

This is one version of the story, now another version, that many of you might not know, is, Sakshi had known that Dhoni is staying at the hotel. No, wait, before jumping to any conclusions, let us clarify that Sakshi didn't know Dhoni by his name or his face. Rather, she was told by her mom, that there is a pahadi guy in the Indian cricket team staying at the hotel, and being a native pahadi herself, Sakshi was excited to meet him. After acquiring her number, when MSD texted her several times, Sakshi thought that the messages from Dhoni were some kind of a prank. It took her some time to register the fact that it was the 'captain of the Indian team' himself! As we have often heard shayars and singers say, 'ishq ek aag ka dariya hai aur doob ke jaana hai', it wasn't easy for Dhoni to woo the girl who stole his heart. Many of you might not believe but the batsman, who was a terrible nightmare for the bowlers on the field, was termed as a 'failure' on the 'pitch of love! MS was often teased as a "hopeless romantic" by his friends as someone who watched the movie, Twilight almost ten times.

After a lot of wooing and chasing on Dhoni's part, which went on for two months, the two finally started dating in March 2008. Sakshi also attended Dhoni's birthday bash that same year. But, as the man could not give Sakshi much time at the party, he took an hour off from his friends and personally dropped Sakshi back at her relative's place. 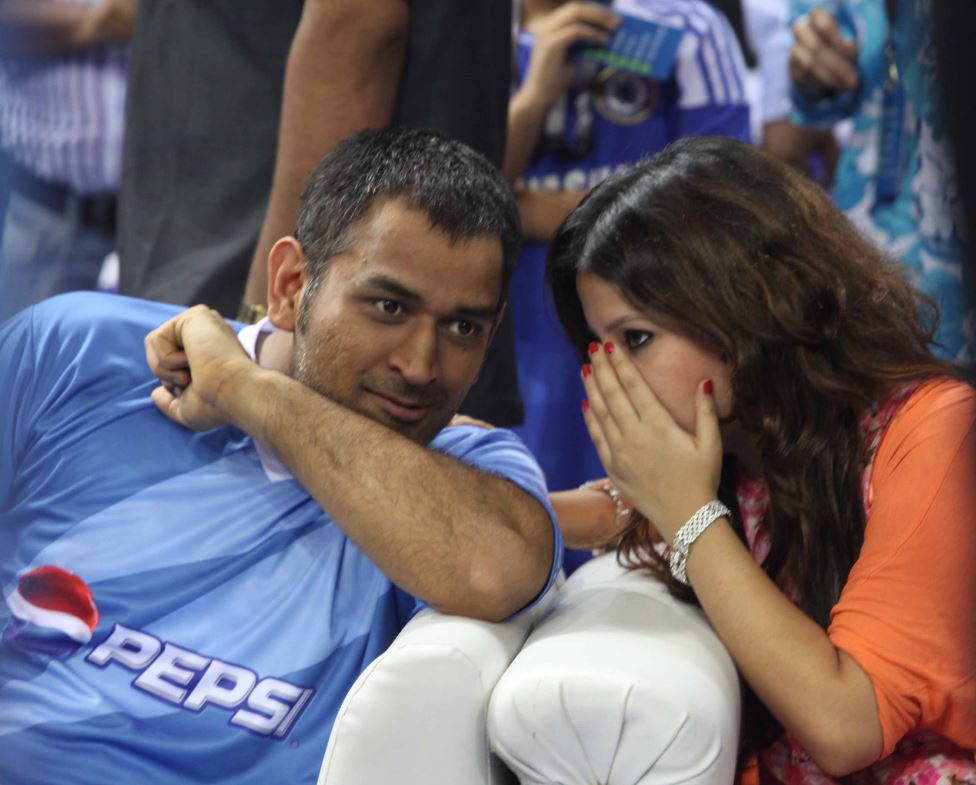 MS Dhoni and Sakshi's affair was kept a secret

Dhoni and Sakshi's affair was kept under wraps so perfectly that it was at the time of their wedding that the world got to know about a 'Sakshi' in Dhoni's life. The wedding was planned in a manner that no one knew about the preparations. Not even the media had even a whiff about the grand wedding.

MS Dhoni and Sakshi got married on July 4, 2010, in Dehradun. Many of Dhoni's friends from the sports, politics and film fraternity attended the wedding and blessed the couple. Incidentally, no one knew about Sakshi Rawat before she tied the knot to India's most eligible bachelor. 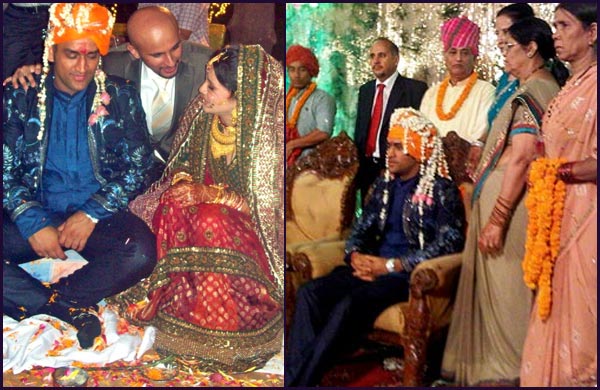 For her wedding day, Sakshi had picked a red and green Sabyasachi lehenga, like a regular customer. It was only after the salesgirl provided the information that Sabya got to know about his special client. Sakshi had opted for the colour red for her lehenga which was paired with a contrasting green-coloured choli. One of Sakshi's double dupattas was draped on her shoulder, and the heavy one was draped on her head. Sakshi's bridal look was accentuated with heavy neckpieces, a maang teeka, nath and red bangles. The ring ceremony was held at Hotel Competant in Dehradun, on Saturday, July 3, 2010. And, the wedding ceremony was held the next day, that is, Sunday, July 4, at Vishranti Resort, near Dehradun. Bollywood actor, John Abraham, director, Farah Khan, Dhoni's teammates, Suresh Raina, RP Singh, Harbhajan Singh, Ashish Nehra, and Indian politicians, Sharad Pawar, Vasundhara Raje were a few who made their presence felt at the ceremony. 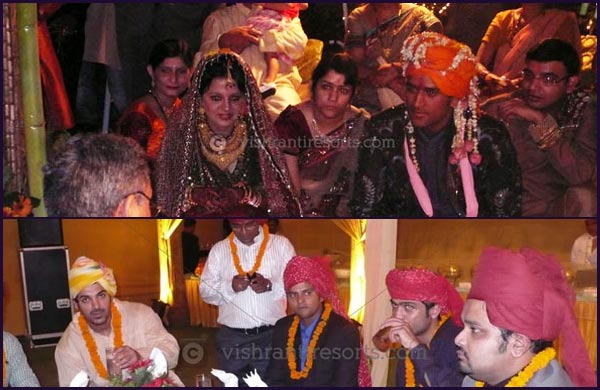 Call it 'lady luck' or just coincidence, but Sakshi's arrival in MS Dhoni's life brought immense success. It is believed that Dhoni's performance as a player got better post his marriage to Sakshi. Sakshi loves cheering her husband from the stands, she prefers to stay away from the media. However, she is a social media sensation, known for her wits, bubbly nature and amazing fashion sense. MS Dhoni had once said that as long as he lives his life like a player, Sakshi will rank third in his life. He had said, "I love my country. I tell my wife she is only the third most important thing after my country and my parents, in that order. The point is that while I am an Indian cricketer I will devote myself to that cause. Cricket is not everything, not by any means, but it is a large part of who I am." 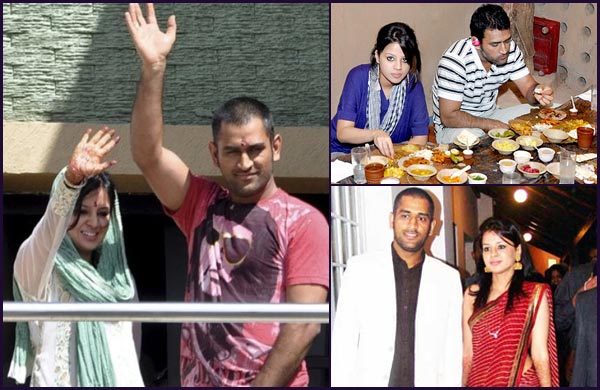 Speaking about his wife, Sakshi's impact on his life and as a person and as a player, MS Dhoni had said, "Sakshi provides the spark I might sometimes need. Jokes aside, she is the person to whom I have a reference. She is both loving and inspirational. Sometimes she travels with me, but cricket is easier without having to ensure her safe passage. One day, we will see the sights together and she says that then, can she please move to number two on the list of my priorities! But for the moment I am here to play cricket. I have been given this honour to play for my country so I want to see it through." 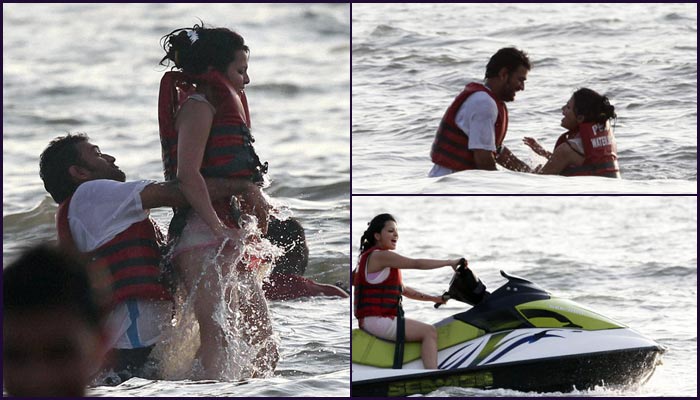 MS Dhoni had become 'daddy cool' from 'Captain cool' on February 6, 2015, while he was on 'National Duty', playing ODI World Cup in Australia. Dhoni had chosen his 'captaincy duties' over his 'fatherly duties', for which he shall be forever remembered! The news of becoming a father to a little girl was conveyed to him by MSD's close friend, Suresh Raina. The couple named their little princess, Ziva, which is originally a Hebrew name, and it means 'radiance, brilliance, light, brightness, and the light of God'.

Don't Miss: When Adorable Father-Daughter Moments Shared By MS Dhoni And Ziva Took The Internet By A Storm 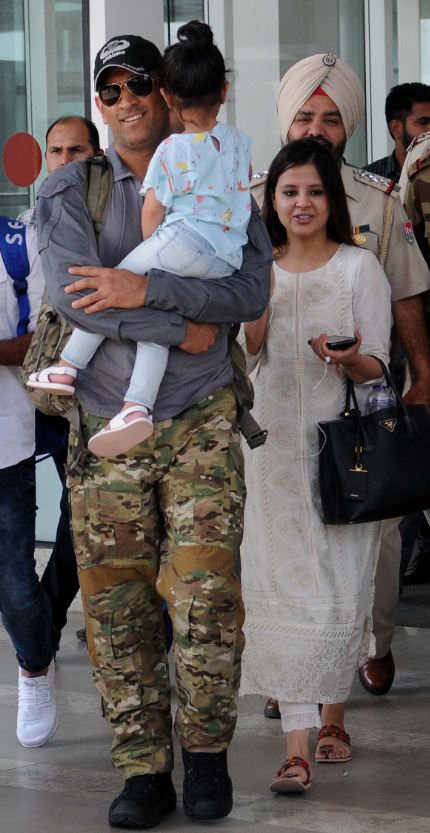 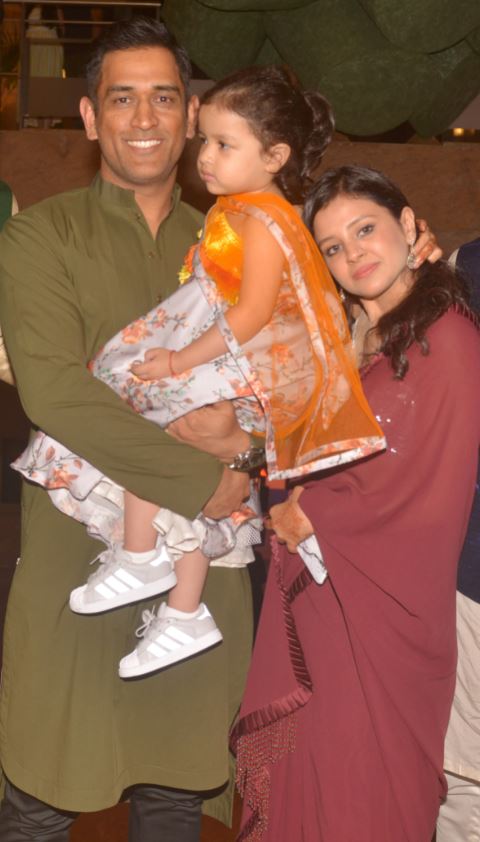 Did you know MS Dhoni's wife, Sakshi has his name inked? Her tattoo on the left hand has ‘MS’ and ‘5’ designed, and the one on the right hand had Ziva's birthday in Roman numerals. Not only this, she has a tattoo of ‘Mahi’ (Dhoni’s nickname) written in Devanagari just below her left ear. 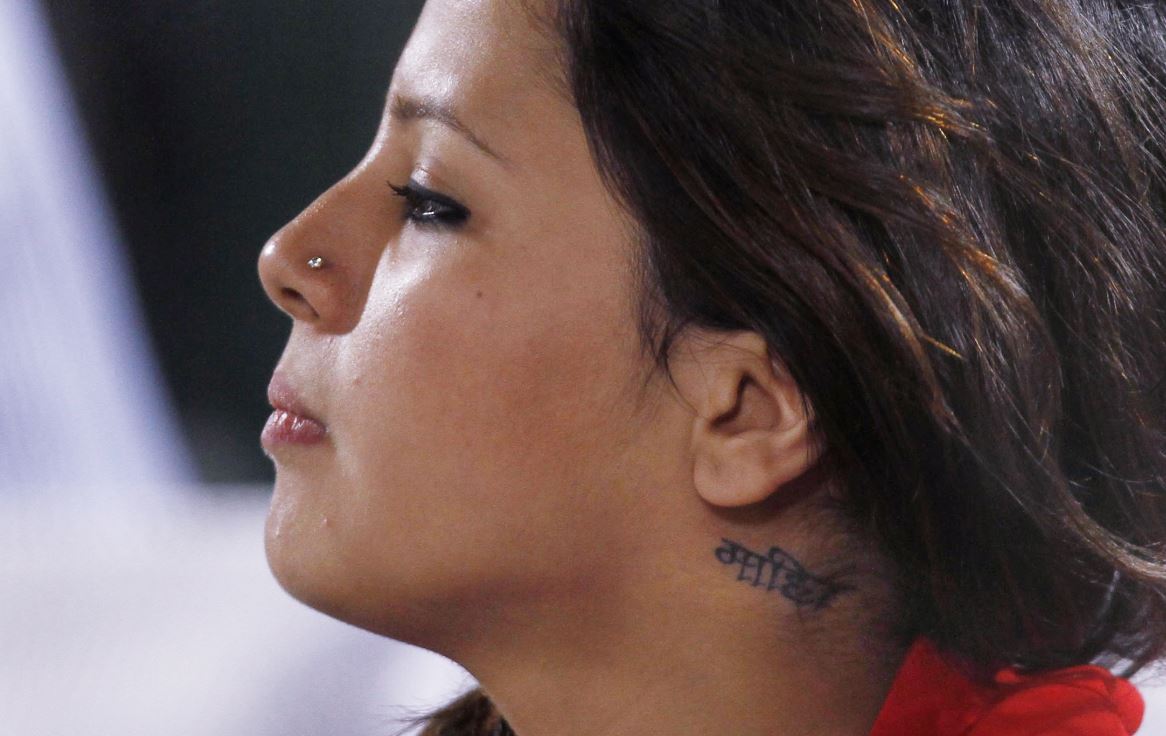 Sakshi Dhoni is the CEO of Dhoni Entertainment, and her net worth is roughly estimated to be somewhere between 1 million USD to 5 million USD.

Recommended Read: MS Dhoni And His Wife, Sakshi Dhoni's Fun-Filled, Lovely Moments Which Had Won Over The Internet 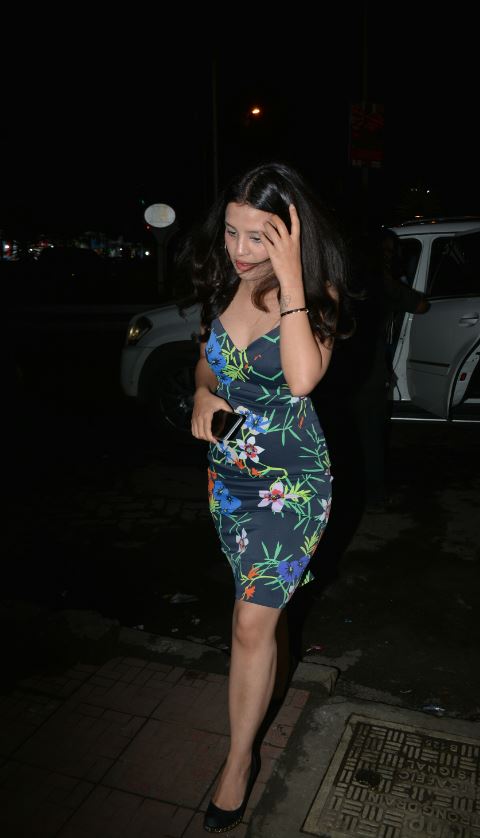 Sakshi and Mahi make an adorable couple with a lot of understanding. She understands that it is his time to make the most out of his career and he understands that he will have to make up for all this time. They are seen together at times during various events. We hope that they continue to live this blissful life always!