Meeting for an arranged marriage, Ravindra Jadeja was bowled by Rivaba Solanki's maturity and looks and it was 'love at first sight' for him. Read their beautiful love story inside!

Cricket is not just a sport in our country, it is a religion, which is ardently followed by millions. And if you are a cricket buff, you must be aware of the supremacy of the all-rounder, Ravindra Jadeja or we should say, ‘Sir Ravindra Jadeja’ as once mentioned by Mahendra Singh Dhoni. Just like his exceptionally well game, his love life is also a tale that everyone must hear. We are sure the weirdly funny humour that he exudes on his social media surely did the charm on his ladylove, Rivaba Solanki. Ravindra Jadeja is a Rajputana boy, born on 6th December 1988. While his father was a watchman and wanted him to be in the army, the then-little boy had an interest in cricket. He had started taking formal coaching for the game when he was sixteen years old. He had almost decided to leave cricket after his mother’s demise in an accident, however, destiny had other plans. It was 2008 that his performance in domestic cricket had caught national team selectors’ attention and he was selected for the Indian cricket team in 2009. Since then, his career has only seen highs with his net worth churning up to around Rs 48 crore. Not just his professional life is often the talk of the town, but often people wonder, who is the wife of Ravindra Jadeja? Let's help you understand their love story better. Wondering who is the wife of Ravindra Jadeja? Meet Rivaba Solanki, who was born in 1990 to a businessman, Hardev Singh Solanki and an employee of the Indian Railways, Prafullaba Solanki. She is the niece of Congress politician Hari Singh Solanki. She had done her graduation in Mechanical Engineering from the Atmiya Institute of Technology and Science, Rajkot. In 2020, she was appointed as the chief of the women’s wing of Karni Sena, a right-wing organisation of the Kshatriya community. In 2019, she had joined BJP. 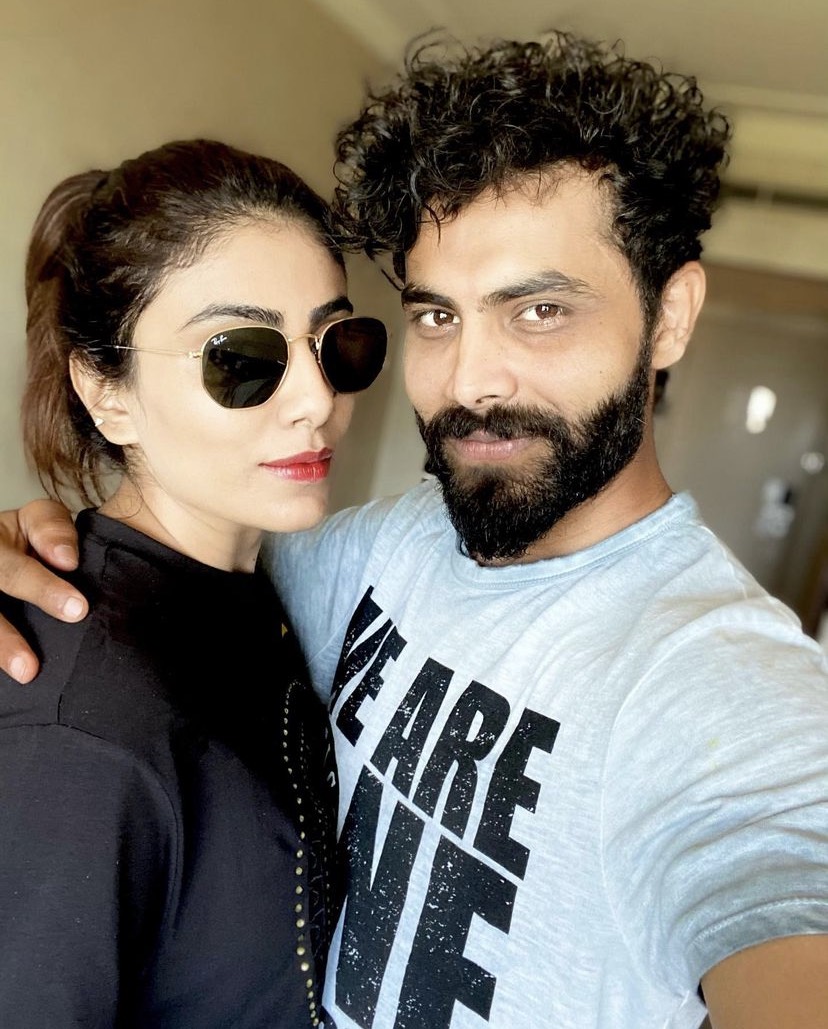 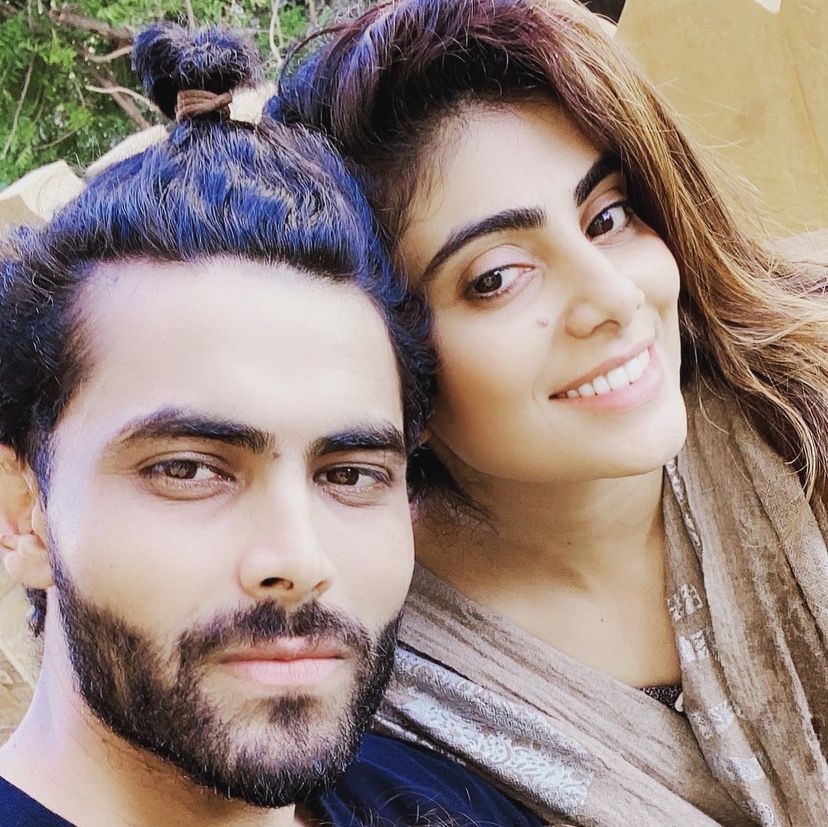 Ravindra and Rivaba had met at a party and hit it off immediately. It is said that for him, it was love at first sight. Once in an interview, he had shared that he had found Riva to be ‘attractive, educated, understanding’, and he was looking for someone, just like her. After their first meeting, the couple had exchanged their numbers and had stayed in touch. Soon, the two had started bonding with each other’s family and had realised that they are meant to be together. 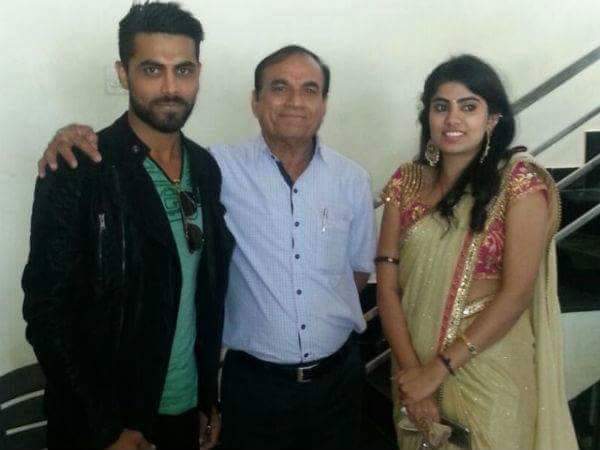 While they had met in December 2015, the love between them was so profound that the two had not waited too long to exchange the rings. On February 5, 2016, Ravindra and Rivaba had exchanged rings in a private ceremony. Reportedly, the engagement had taken place at Jadeja’s hotel, ‘Jaddu’s Food Field’ in Rajkot. To announce his engagement, he had tweeted, “Time To Start New Innings. Got Engaged.” Later, the pictures from their engagement ceremony had started doing the rounds on social media and the couple had looked much in love. While Ravindra had worn a golden Jodhpuri sherwani with heavily embroidered collar, sleeves and buttons, his then-fiance, Rivaba had opted for a choli cut Anarkali suit in golden and orange colour. She had accentuated her look with bangles, a bun and a heavy antique gold necklace. Along with exchanging the rings, the couple had also exchanged gold bracelets as a custom in their community.

Also Read: Love Story Of Sachin And Anjali Tendulkar: Sachin Tendulkar Saw His Wife Anjali For The First Time At The Airport And Fell In Love With Her 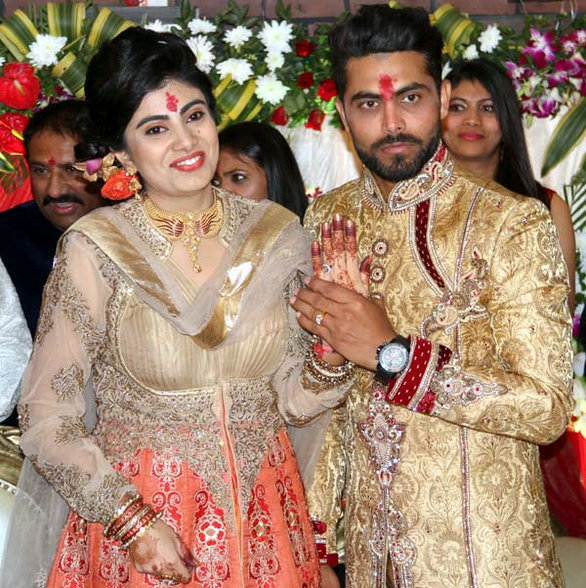 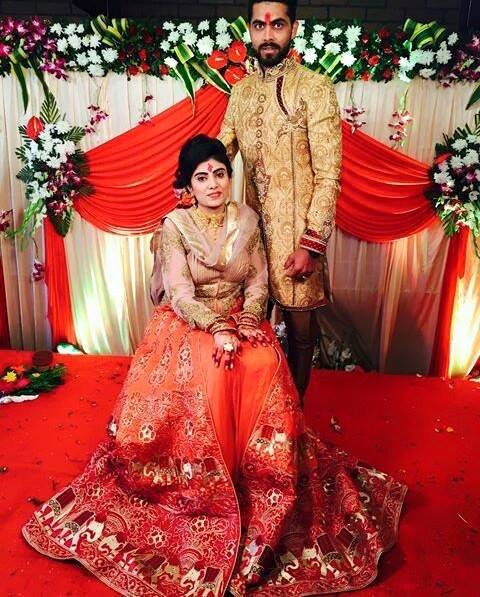 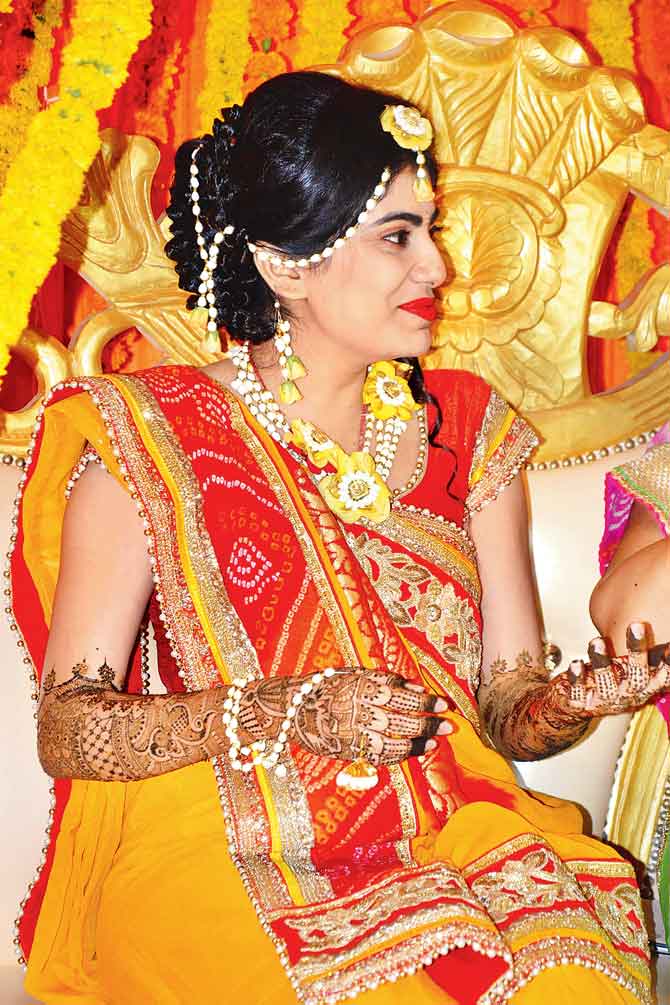 Ravindra and Rivaba had not waited too long to tie the knot and their pre-wedding functions had begun on April 15, 2016. From haldi, mehendi to sangeet, every ceremony of their wedding was an extravaganza affair. The decor, the bride and groom’s attire, everything was royal and Rajputana. For mehendi rasam, Rivaba had looked splendid in a yellow panetar, which is a traditional Gujarati wedding outfit for the bride. She had accentuated her look with white and yellow floral jewellery. While Rivaba had looked stunning for her mehendi, Ravindra had opted for a casual t-shirt and pyjama for his haldi ceremony which was a homely affair. 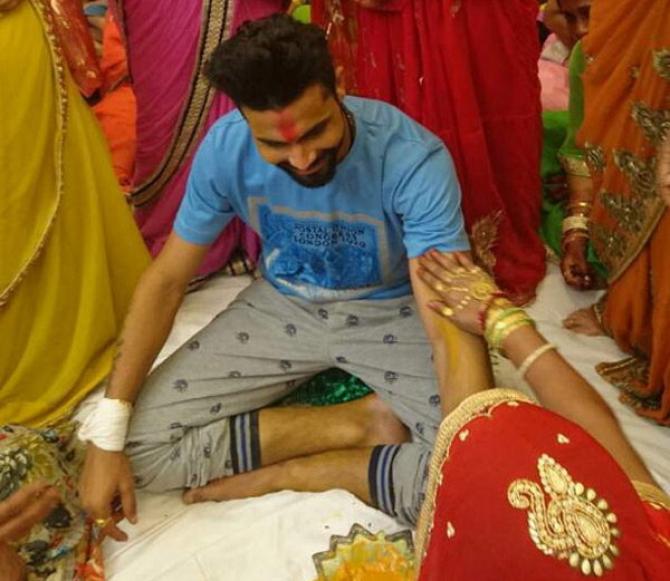 It was on April 16, 2016, when Jadeja and Rivaba had their grand sangeet ceremony. The cricketer had skipped his match to celebrate the big day of his life. For the ceremony, Ravindra had looked dapper in red and golden bandhgala sherwani with a velvet touch, whereas, his then-fiancé, Rivaba had worn a peach-ish net gown with heavy metallic work on it. The dashing groom had even exhibited his skills with the sword as he had moved it in the air for quite some time like a pro. 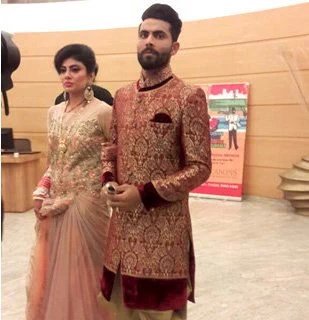 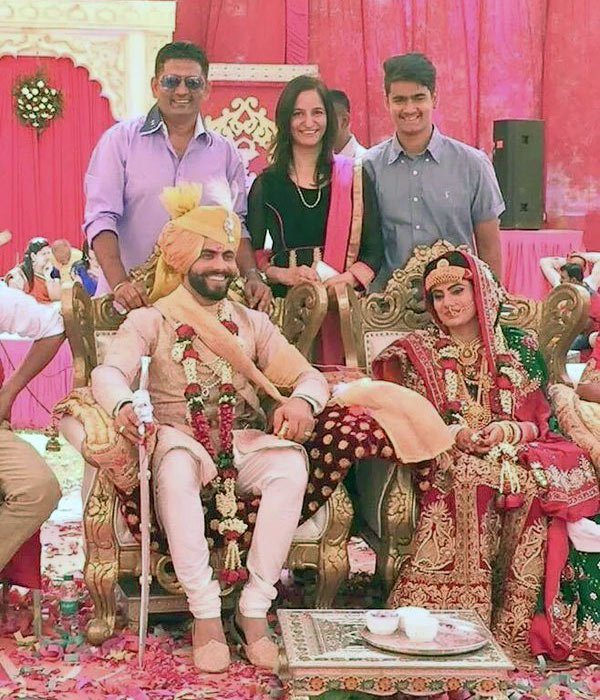 The final day of the union had come for Ravindra Jadeja and Rivaba Solanki on April 17, 2016. It was in the morning at the Seasons Hotel, Rajkot that Ravindra and Rivaba had tied the knot and had become each others' forever. For their royal wedding, Jadeja had looked no less than a Rajput king in a baby pink coloured sherwani with self-work. He had accessorised his look with a golden turban, kalgi and a neckpiece. On the other hand, Rivaba had looked like a princess in a traditional red, green and orange lehenga with heavily embellished work. Jadeja was gifted an Audi car by his father-in-law and he had arrived at the wedding venue in the same car. 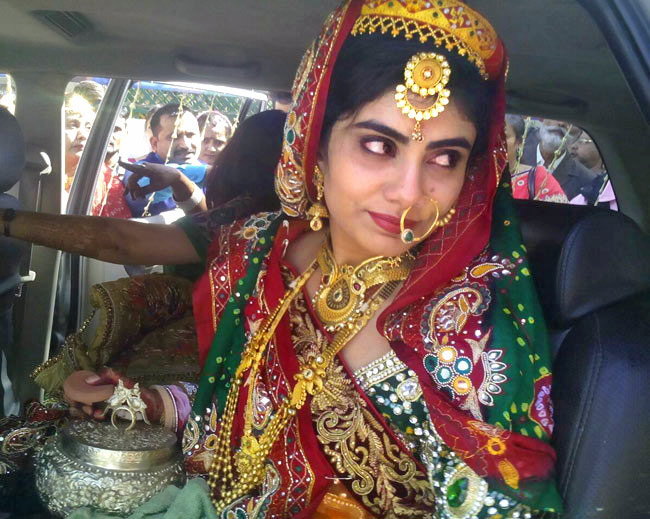 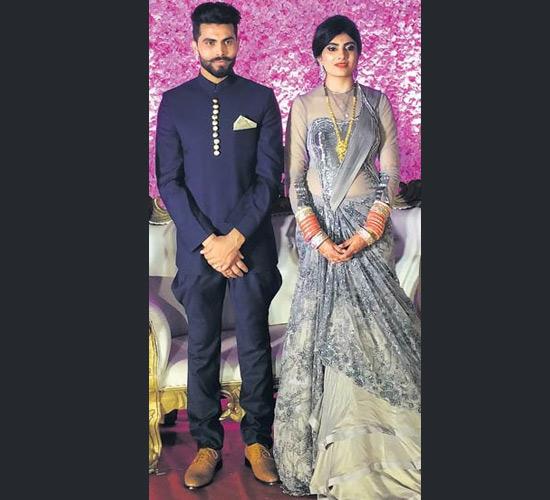 While their wedding was a close-knit affair with only friends and family members present at the venue, the couple had hosted a grand reception party at the Seasons Hotel, Rajkot, on the evening of their wedding day. For their reception, Ravindra Jadeja had looked dapper in a blue short kurta and asymmetrical pyjama and Rivaba had looked stunning in her fusion grey gown. She had completed her look with her choodha, and heavy gold mangal sutra.

Ravindra Jadeja and Rivaba Solanki expecting their first child together 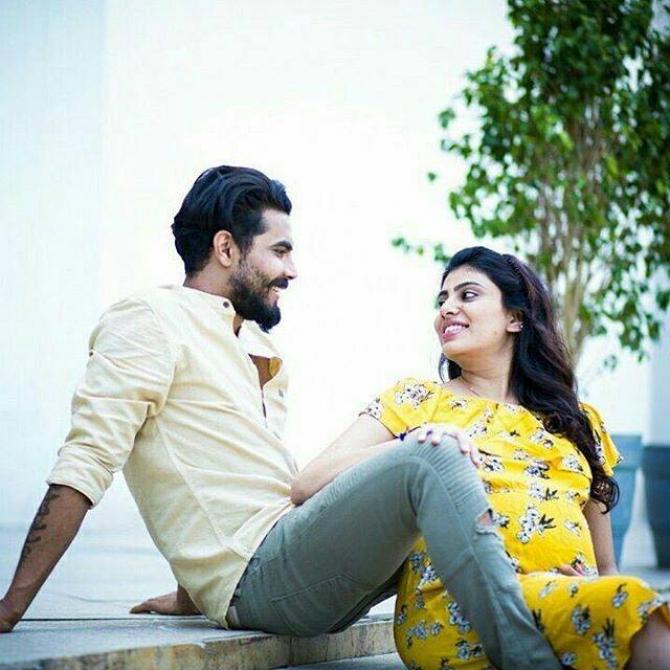 It was a few months after their wedding that the couple was expecting their first child together. Rivaba had a traditional baby shower in 2017 at Jadeja’s house in Jamnagar. It was a private affair and the then-mommy-to-be, Rivaba had looked stunning in a green saree and matching jewellery. The pregnancy glow was clearly visible on her face. It was after her baby shower, Jadeja’s fans had gotten to know about the happy news. Later, a picture of the then-soon-to-be parents had surfaced online, where the then-mommy-to-be was seen flaunting her baby bump and Jadeja's happiness was clearly visible on his face. While Rivaba was in her last days of pregnancy, Jadeja was busy with the ICC Champions Trophy.

Talking about leaving his wife behind for the series, Jadeja had mentioned in a video shared by the official broadcaster of the series, Star Sports, "I had to leave my pregnant wife behind. Family matters a lot to me, but it was also necessary to be part of the team with an important match coming up against Pakistan. Since the family is there to take care of her even they felt that I should play as that's more important and I decided to do the same." 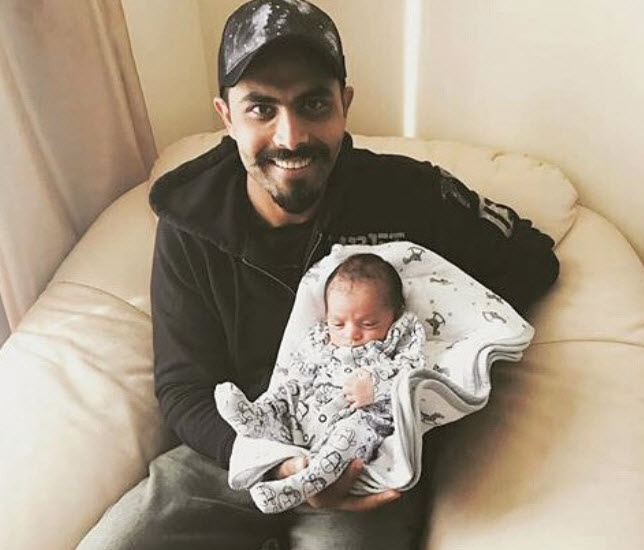 Ravindra Jadeja and his wife, Rivaba had welcomed a baby girl, on June 8, 2017, and later, on June 13, 2017, Ravindra had announced the name of their daughter. Taking to his Twitter handle, he had tweeted, “We have named our bundle of joy and little princess “Nidhyana'”.

Ravindra Jadeja had to wait for a month to meet his daughter, Nidhyana as he was on a professional tour. During a promotional event, Ravindra had shared his feelings on entering the fatherhood phase of his life and had said,

“It was a special feeling. I don’t realise anything now but as I spend more time with the baby, then I will get more attached. It is a good thing for me and everyone in the family are very happy. Sometimes when I go home, I get bored. So now, I have a toy to play with… it will be a good time pass for me.”

The parents have kept their daughter away from the limelight and rarely do we see them post pictures from their personal life on their social media handles.

Ravindra Jadeja is not only an inspiration on the field, but his ‘love at first sight’ story is also an inspiration for the generation, who runs away from the idea of arranged marriage. Ravindra and Rivaba’s love story makes us believe that when you are meant to be, love doesn’t take ages to bloom.

NEXT READ: 5 Famous Cricketers Who Married Their Cousins Or Friend's Ex-Wife