Famous Indian comedian, Kapil Sharma married his love, Ginni Chatrath on December 12, 2018. Scroll down to see how Ginni flaunted her baby bump in style as she stepped out to watch Kapil's movie! 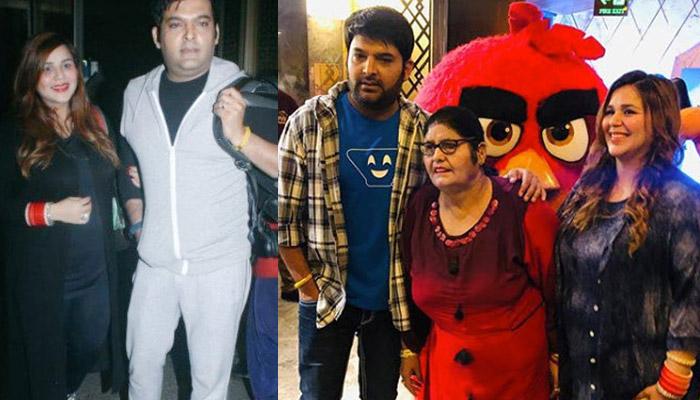 There is no other feeling like that of being pregnant and carrying the little ‘you’ inside your tummy. The feeling of the constant movements inside your belly is something which can’t be explained in mere words. This is probably one such phase wherein women even enjoy the enormous changes their bodies go through. Such blissful is pregnancy! And famous comedian or rather comedy King, as he is touted to be, Kapil Sharma’s wife, Ginni Chatrath is currently enjoying this phase of her life to the core!

December 12, 2018, was the auspicious day when longtime sweethearts, Kapil and Ginni had taken the wedding vows and walked down the aisle in a Sikh wedding. A few months down the lane, speculations were all over the internet and newspapers that the couple is expecting their first baby in 2019. And it was in July 2019, when the cat was finally out of the bag as Kapil had confirmed Ginni’s pregnancy. And now, the elated parents-to-be are eagerly waiting for their little one to arrive and so are we! (You May Like: Sara Ali Khan Opens Up About Her Equation With Kareena Kapoor Khan) 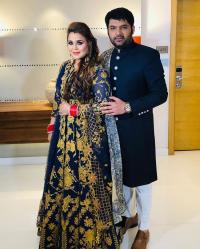 Unlike other celebrities, Ginni is keeping a low-profile during her pregnancy days. Hardly we get to see her pictures with the baby bump, but yesterday (August 22, 2019) was a lucky day for us as we got to witness the mom-to-be flaunting her baby bump in style, whilst killing her maternity look. Yesterday, Kapil, his pregnant wife, Ginni and mom, Janak Rani ji stepped out together to watch his recently released movie, Angry Birds. Kiku Sharda, Rochelle Rao with husband, Keith Sequeira, Krushna Abhishek with wife, Kashmira Shah, etc., were also there along with their other common friends. What grabbed the attention was the way Kapil’s expecting wife, Ginni was nailing her maternity look. Ginni looked drop-dead gorgeous in a grey and blue jacket style maxi dress, which she completed with a pair of grey casual shoes, keeping loose curls for her lovely locks. Did you notice her pregnancy glow, which is quite evident on her face? Below are the pictures shared by Kapil himself, wording his post as “Yayyyyyyyy! we just watched the #AngryBirds2 n everybody just loved it go n watch with your family. thank u @sonypictures @sonypicturesnetworks for making us part of this beautiful movie. #teamtkss #thekapilsharmashow @kikusharda @archanapuransingh.” (Also Read: Niti Taylor's 'Saras Che' Garba Performance With Family On Her Engagement, Channels Inner Gujarati) 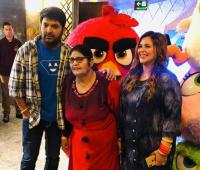 A couple of days ago, Kapil Sharma and Ginni Chatrath had attended their writer-friend, Vankush Arora and his wife, Riddhi Bhatt’s baby shower. Almost the entire The Kapil Sharma Show cast was present at the baby shower ceremony namely, Krushna Abhishek and Kashmera Shah, Rochelle Rao and Keith Sequiera, Kiku Sharda, Sumona Chakravarti and many others. Without further ado, checkout a picture here in case you missed out earlier:

For the unversed, the doting hubby, Kapil had taken his preggy wife, Ginni to Canada for their babymoon. As happening as it may sound, before flying, the two were papped at the airport. And without shying away, Kapil and Ginni had smiled for the camera and posed as a happy couple. They had complemented each other in their grey and black coloured casual best. (Checkout: Kapil Sharma Reveals If He Wants A Boy Or A Girl On Embracing Fatherhood Soon, Says We Are Waiting) 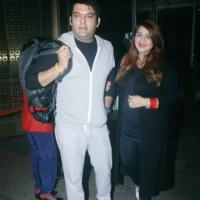 In a recently held interview, Kapil had spoken about his family and embracing parenthood. Firstly, sharing her mom’s concern for him in the context of getting married and setting down, he had averred, “My mom used to get upset with me previously. But now, she's happy and she stays with me.” Adding further about the arrival of his little munchkin, he had added, "Everyone in the family is excited about the baby. We don't know if it would be a baby girl or a boy but whatever it is, we are all happy and waiting." (Do Read: Sameera Reddy's Daughter, Nyra Steps Out For Her First Outing After 40 Days Of Her Birth (Pic)) 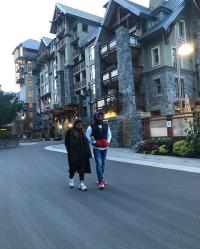 What do you guys have to say about Ginni Chatrath’s maternity fashion and pregnancy glow? Keep us posted!