August 13, 2019, marks to be a special day for Niti Taylor and the ‘man’ of her life, Parikshit Bawa, as they had gotten engaged. Scroll down to see an unseen dance video of Niti with her family. It has been 16 years and it is still impossible to watch Kal Ho Na Ho without shedding a bucket of tears. From the love triangle of Aman-Naina-Rohit to Shah Rukh’s ‘6 din, ladki in’ formula, KHNH has managed to stay in our hearts till now. But something that we can never forget from the film is Rohit's gujju family and their super-entertaining dance at their sagai that goes forever down in history. All that comes to our mind when we talk about gujjus is garba and dhokla. No gujju function is complete without garba! And similar was the case with newly-engaged telly world diva, Niti Taylor. (Also Read: Nita Ambani And Isha Ambani 'Twin And Win' In Gota Work Ethnic Ensembles By Abu Jani Sandeep Khosla)

August 13, 2019, marks to be a special day for Niti Taylor and the ‘man’ of her life, Parikshit Bawa, as they had taken their relationship to the next level by getting engaged. Niti and Parikshit had exchanged rings in the presence of their family and close friends and their engagement ceremony was preceded with a mehendi night. For the engagement, Niti had looked prettiest in a silver sequinned lehenga with tassel detailing on the hem of her boat-neck blouse. Her beau, Parikshit had well complemented his soon-to-be-bride wearing a light-hued bandhgala. 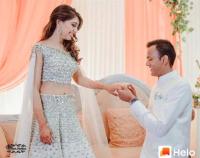 Since August 12, 2019, when the pre-engagement functions of Niti Taylor and Parikshit Bawa had begun, their wedding hashtag, #Partitayles, have been flooded with pictures from the ceremonies. Niti too, has been sharing glimpses from the most special day of her life. A few moments ago, Niti gave a sneak peek of her gujju family dance performance on the song, Kamariya from the film, Mitron. She captioned it as “Because the Gujrati in you will always come out #taylors #tayfam #kamariya #partitayles @theglamweddingofficial.”

Just a few days after her engagement, Niti Taylor decided to do something special for her mother, Cheryl Taylor and sister, Aditi Parbhoo. Ditching the usual pre-wedding shoot with her fiancé, the mother-daughter trio made heads turn with their #FamJamShoot. Niti along with her mother and sister had won our hearts with their simplicity in well-coordinated outfits. Speaking about the shoot, Niti had said, “It was the best thing happened to them and me because we never shot anything together. This was new, it was fun, it was exciting & I had lots of fun and I also know they had a lot of fun too and they looked gorgeous.”

On August 12, 2019, Niti Taylor had surprised everyone by introducing the love of her life, Parikshit Bawa to the world with her engagement announcement. She had taken to her Instagram and had posted a ‘lost in each other’s eyes’ picture with Parikshit. Niti had captioned it, “We decided on FOREVER. On the eve of beginning my life's most beautiful moment, I feel all the love and happiness there possibly can be. It only feels complete after letting you all know. I've had your love and support since the past decade and with great happiness I'd like to inform everyone that I'm getting ENGAGED! We would like to share this moment with you all and seek your blessings and good wishes for this new innings in our lives… #PARTITAYLES.” (Also Read: Amitabh Bachchan And Jaya Bachchan's Unseen Dance Performance At Abhishek-Aishwarya's Sangeet)

In a post-engagement interview with the Bombay Times, Niti Taylor had spoken about how she met her fiancé, Parikshit Bawa, and had revealed, "I knew Parikshit from school and back then, we were good friends. A few months ago, we reconnected on Instagram. When I started to know him better, I realised that he is a gem of a person. I met him in Delhi. My parents met him too, and they also liked him a lot. The best part about having Parikshit in my life is that we share the same qualities."

Revealing their marriage plans, Niti Taylor had remarked, "We don’t plan to get married this year. Hopefully, it should happen next year. My fiancé’s job takes him to different places, while I am currently based in Mumbai." Expressing her happiness on not marrying someone from the industry, Niti had continued, "I have always said that I will not marry someone from showbiz. I am happy that I am getting married to a man of my parents’ and my choice." (Also Read: Niti Taylor Celebrates The Mother-Sister Bond In A #FamJamShoot, Ditching Her Bridesmaids And Fiance)

After watching Niti’s family dance video, don’t you feel like doing some garba too? *wink* Just how the saas-bahu sagas have always portrayed the mothers-in-law to be evil, the sisters-in-law are also characterised as backstabbers and high on drama. But in reality, these relationships are way too different and in most cases, the bride is lucky to find her own mother and sister in the