Now that Kajol is in Singapore with her daughter, Nysa Devgan and Yug Devgan is in Mumbai, looks like the duty of being the in-house photographer has been temporarily given to the 17-year-old. 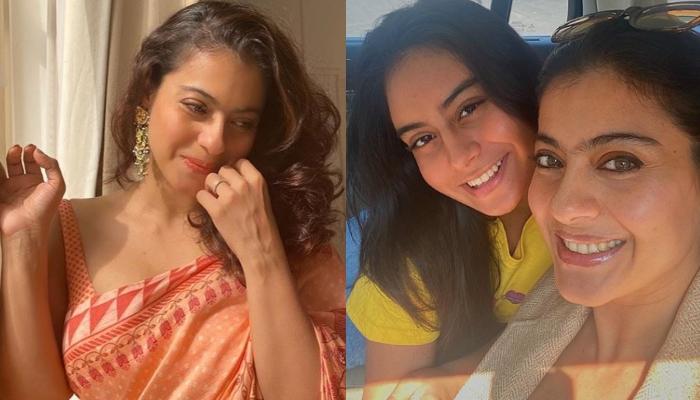 Saree is the first love of every woman and this nine yards of elegance not only connects us to our roots, but it also has the power to make heads turn in wonderment. Kajol too, can vouch for the same, who had missed wearing her sarees from a long time. Kajol had temporarily moved to Singapore a few days back with her daughter, Nysa Devgan while Ajay Devgn is in Mumbai with their son, Yug. Post the lockdown got lifted, Nysa’s college resumed and Kajol had accompanied her to Singapore to be with her amidst the ongoing pandemic. (Also Read: Ashutosh Rana Recalls Proposing Renuka Shahane With Poem After Playing 'Phone A Friend' For 3 Months)

Kajol loves giving sneak-peaks of her personal and professional life on her Instagram handle and our favourite ones are the pictures that her in-house photographer, Yug Devgan clicks. Kajol often posts pictures in which she turns the muse and her 10-year-old son is the photographer. For instance, last year, Kajol had posted a picture of herself, flaunting her soft curls and had swooned us with her killer expressions. Revealing the photographer in her caption, Kajol had written, "Yug Devgn at work again."

Now that Kajol is in Singapore with her daughter, Nysa Devgan and Yug Devgan is in Mumbai, looks like the duty of being the in-house photographer has been temporarily given to the 17-year-old. Kajol flaunted her love for the sarees and it was none other than Nysa, who perfectly captured her mom’s adayein and nakhre in camera. Kajol captioned her post as “Just really missed wearing my sarees. So had a heyday doing this. Love the saree for all the subtle possibilities... hmmm! Another in house photographer.. this time my daughter.”

When Nysa Devgan had turned 17 on April 20, 2020, Kajol had posted a video, which had comprised of some cherishable moments of her daughter. As Nysa had turned 17, her doting mother had gathered her solo pictures and the ones with her family in a video and had captioned it as “Almost an adult. All of 17 and part of my heart always. Happy birthday to the most beautiful girl in the world! #allgrownup #lovemybabygurl.” Kajol had beautifully explained her feelings as her little baby girl is growing up with a song, My Little Girl by Tim Mcgraw. (Also Read: Soha Ali Khan Showers Bhabhi, Kareena Kapoor Khan With Lots Of Love And Praises On Her 40th Birthday)

For the uninitiated, Nysa Devgan, daughter of Kajol and Ajay Devgn, had completed her schooling from Dhirubhai Ambani International School in Mumbai. Post which, she had enrolled in the United College of Southeast Asia in Singapore in early 2018, away from the media scrutiny. Sometimes, Nysa attends B-town parties and get-togethers with her star parents and needless to say, this teenage star kid is certainly the show-stealer!

Ahead of Mother’s Day 2020, in an interview with the Hindustan Times, Kajol had reminisced the phase when she had conceived her firstborn, Nysa Devgan. Kajol had recalled, “When I became a mum, my first thought was that I just could not fail. I knew that this was one test I was going to ace and one exam I was going to top because this really was a question of life and a wasted life.” Admitting that it was soon when she had realised that motherhood is no cakewalk, Kajol had continued, “It took me at least six months to realise that I couldn’t do it alone and I would need everyone with me to help bring up my kids.”

Kajol firmly believes that her daughter, Nysa Devgan and her son, Yug Devgan have positively impacted the person and the actor in her. Kajol had remarked, “My children make me want to be a better person and sometimes a more fun one. Being a mum added a lot to who I was and it has only made me a better actor.” Revealing why her children haven’t watched too many of her films, Kajol had added, “Both my kids love to watch films but haven’t seen many of mine. Firstly, because I haven’t made that many and secondly, according to them, I cry too much and I make them cry too much, so it’s heavy going.” (Also Read: Alia Bhatt Wishes Her 'Mufasa' Mahesh Bhatt On Birthday, Soni Razdan And Shaheen Pen Heartfelt Notes)

It is difficult to guess who is a better photographer – Nysa or Yug! What do you guys think? Let us know.