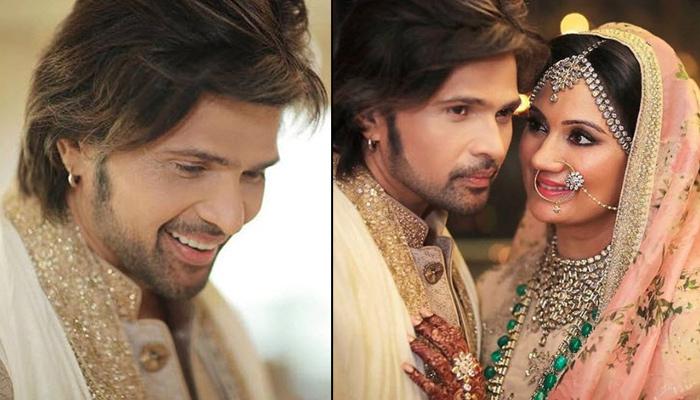 Himesh Reshammiya and Sonia Kapoor entered the shaadi club on May 11, 2018, in a traditional Hindu ceremony at his residence. Himesh was earlier married to Komal but they ended their 22 years of marriage in 2017 and speculations were that Sonia was the reason behind their separation. Himesh and Komal have a son together named Swaym, who was present at his father’s second marriage with Sonia. Himesh Reshammiya took to his Instagram to share some pictures from his wedding, and captioned them as, “Togetherness is bliss!”

While Himesh looked dapper in a light golden sherwani, his bride looked ravishing in a pastel pink lehenga with minimal make-up. Sharing the news of his wedding, Himesh was quoted as saying to Mid-Day on May 11, 2018, “The marriage ceremony will be held at my home tonight. We plan to throw a party for our friends in the film fraternity later. Since tonight offers an auspicious mahurat, we decided to go ahead. It was a last-minute plan. The lagna time is 1.30 am. Considering the odd mahurat time, we haven’t invited any of our friends to the ceremony.” (Also Read: Anand Ahuja Posts First Picture With Wifey Sonam Kapoor Post-Marriage With A Heartfelt Message)

Confirming the news to Mumbai Mirror, groom Himesh said, “I am really happy that Sonia and I have embarked on this new journey. She is a lovely girl. I have loved her unconditionally and the feeling is mutual.” And the newbie bride gushed, “Himesh is a wonderful human being and my soulmate. He means the world to me and I am very happy to start this beautiful journey with him.” (Also Read: Newly-Weds Neha Dhupia And Angad Bedi To Throw A Lavish Reception For B-Town Friends Post-Honeymoon)

As per the reports, a source close to the couple shared, “Sonia will not be taking up any acting offers now. She wants to focus on family. At the wedding ceremony, both sides of family members were present. Himesh’s parents blessed the newlyweds and participated in the rituals. The couple will take off on their honeymoon on Sunday to an undisclosed location abroad.” The source further added, “Sonia loves all 700 songs that Himesh has been involved in but “Main Jahan Rahoon” from Namastey London, “Aashiq Banaya Aapne”, “Hookah Bar” from Khiladi 786 and “Kheench Meri Photo” from Sanam Teri Kasam top the list.” (Also Read: Owner Of Rs 3000 Crores, Anand Ahuja Gifts His Wife, Sonam Kapoor Engagement Ring Worth Rs 90 Lakhs)

The source revealed that Himesh and Sonia had been looking for suitable dates for their marriage for a while and Himesh even serenaded his lady-love with her favourite Bollywood songs and he also prepped for his upcoming films as an actor. “Meanwhile, Himesh has two new films as an actor starting from August which will be announced soon. One is a rom-com and the other a love story. Last year, he had been busy with his TV commitments and travelling for live shows, so the couple decided that now was the perfect time to get married.” Himesh made sure to stay fit even amidst the wedding preparations, “He needs to acquire a beefed-up look for his upcoming films.” (Also Read: Hina Khan Shuts Down A Troll Who Said Boyfriend Rocky Jaiswal Is Not Good-Looking For Her)

Congratulations to the newly-wedded couple, Himesh Reshammiya and Sonia Kapoor!

Next Read: Neha Dhupia Never Wanted To Date An Actor, Let Alone Marry, But Ended Up Marrying One, Here's Why!