It was just a few months back, when the hottest television actor, Gautam Rode announced his engagement with his lady-love, Pankhuri Awasthy. The rumours of them dating started doing the rounds since their show, Suryaputra Karn aired on television. But the couple always dodged such reports until Diwali, 2017.

Now the reports are that the couple has decided to move into the next phase of their lives, marriage. As per Bollywoodlife.com, a source was quoted as saying, “TV hunk Gautam Rode is getting married to his girlfriend Pankhuri Awasthy on Feb 4 and 5 and the wedding preparations are on in full swing. The wedding will happen in Delhi which is the hometown of Gautam and Pankhuri.”

The wedding preparations are going on in the full swing, and before Valentine’s day, they will tie the nuptial knot. Both Gautam and Pankhuri are from Delhi, so the wedding will take place in the capital itself. Despite their busy schedules, the couple takes out time to spend with each other. They went on a vacation to Thailand to spend some quality time together. From being co-stars to friends and finally soulmates, their love for each other gradually evolved with time. They had always kept their relationship under the wraps.

Announcing their hush-hush engagement, the actor revealed to a media portal, “Yes, Pankhuri and I recently got engaged and I feel lucky to have found a life partner like her. We share the same wavelength and she has fit into my family perfectly.” After they got engaged, Gautam shared the first picture with his fiancée, Pankhuri and captioned it, “Start of a new journey. Thanku friends for all your lovely wishes.” Pankhuri also thanked her fans for the wishes and wrote, “I carry the sun in a golden cup, The moon in a silver bag. Thank you everyone for your wishes and blessings.”

As we all know that Gautam is a big time fitness enthusiast, his fiancée is into poetry. In an interview in 2017, Pankhuri was quoted as saying, "We have taken the first step. The families have wholeheartedly welcomed our union. In Gautam, I have found the answer to all my dreams. I’m eagerly looking forward to the most important phase of my life. Our families will sit together and decide the date. It will be sometime next year.”

And about his marriage plans, Gautam told SpotboyE in an interview in 2017, “It's not that I don't want to get married. It'll come soon. Things will happen when they have to.” Nor denying or accepting his relationship with Pankhuri, he diplomatically answered their dating rumours, “I don't want to name anyone right now but I'm seeing someone for sure. I'm not single.” About him settling down, he retorted, “I should. I'm 40! It will be very late otherwise.”

Gautam and Pankhuri, we all are eagerly looking forward to your wedding. May you two be blessed with all the happiness and love in the world!

Next Read: Anurag Kashyap Answers If He Has Become A Better Person After 2 Failed Marriages, In Front Of Kalki 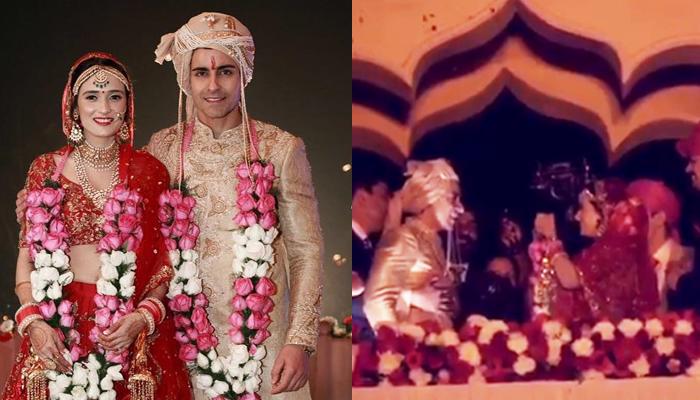 The handsome hunk of Indian television and everyone’s beloved Gautam Rode is now taken. Gautam married his longtime girlfriend, Pankhuri Awasthy in a private destination wedding on February 5, 2018. The wedding festivities kicked off from February 4 and continued for 2 days. The newly-weds hosted their wedding functions at Tijara