It came as a shock when Dia Mirza parted ways with her husband, Sahil Sangha after being married for five long years. Checkout how she has wished her estranged husband for his latest achievement!

Separations and divorces hurt and when we say so we literally mean it. Just like the way if any happy news in our celebrities’ life comes, their fans rejoice it to the fullest, similarly, when any breakup or divorce happens in the Tinseltown, it shatters them too. Exactly this happened when everyone got to know about Kaafir star, Dia Mirza’s separation with her husband, Sahil Sangha, which marked a very bad start of August 2019.

It was on August 1, 2019, that we came to know about the heart-wrenching separation of Dia Mirza and Sahil Sangha when the two had released a joint statement regarding the same. To everyone’s utter shock, the two decided to part ways after being in a blissful marital bond for 5 long years and 11 years of togetherness. (You May Like: Indian Idol Contestant Vibhor Parashar Denies Dating Neha Kakkar, Gives Clarity On Their Relation) 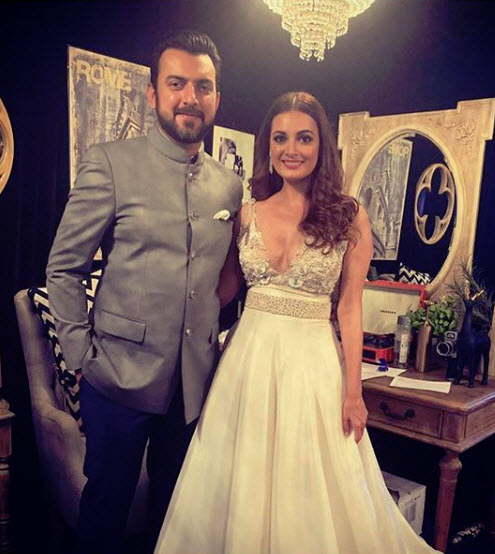 Dia Mirza took to her official Instagram handle and shared a story wherein she congratulated her estranged husband, Sahil Sangha for the commendable success of his Amazon Prime Original, Mind The Malhotras. She shared a picture, wherein we can spot the happy faces of the entire team of the series. Atop which she wrote, “#MINDTHEMALHOTRAS Congratulations @sahil_insta_sangha @sameern @applausesocial @cyrus_sahukar @minimathur.” Take a look here: 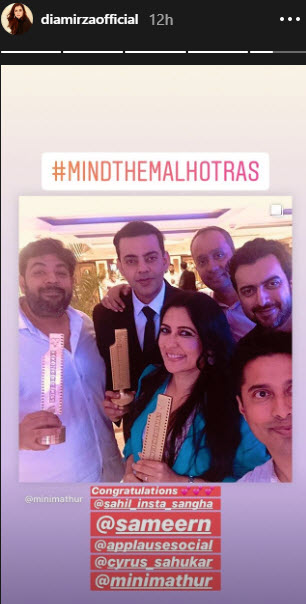 Today, on August 9, 2019, Sahil himself took to his official Instagram handle and shared the poster of Mind The Malhotras, expressing his happiness on its success in the caption. He wrote, “Super stoked that @minimathur and @cyrus_sahukar have started collecting a few trophies for #Shef and #Rish #mindthemalhotras @diamirzaofficial @sameern @sidkhaitan @ajaybhuyan24 #bornfreeentertainment @applausesocial @primevideoin Thank You #Screenxx for the appreciation.” (Also Check: Vishal Aditya Singh Reveals Ex Madhurima Tuli Felt Ashamed To Be Seen With Him When They Were Dating) For the ones who had missed out on Dia and Sahil’s joint statement regarding their separation, it was worded as, “After 11 years of sharing our lives and being together, we have mutually decided to separate. We remain friends and will continue to be there for each other with love and respect. While our journeys may lead us down different paths, we are forever grateful for the bond that we share with each other. We thank our family and our friends for all their love and understanding and members of the media for their continued support and request everyone to respect our need for privacy at this time. We will not be commenting any further on this matter. Thank you, Dia Mirza and Sahil Sangha.” Checkout: 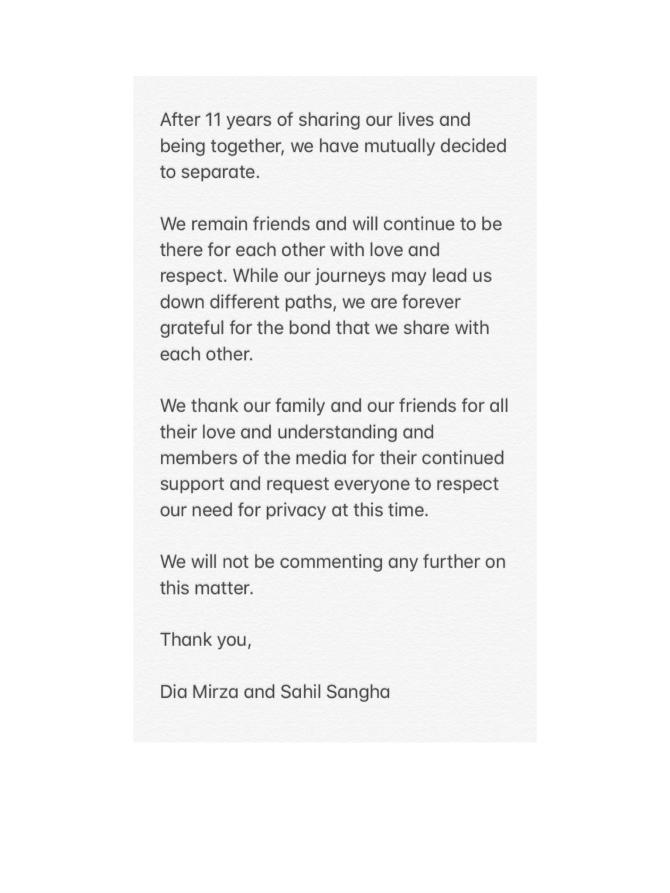 Soon after the separation was announced, the internet was flooded with the series of reasons that could have possibly been behind their split. And it landed them to the conclusion that Sahil was having an extra marital affair with Judgementall Hai Kya writer, Kanika Dhillon. Soon Sahil and Dia came out in open and had clarified the case. Sahil had written, “There is absolutely no truth to the story linking us to respected colleagues of our fraternity. It is a distasteful lie. We would appreciate a strong measure of restraint and a basic level of decency before such callous assumptions are made about the personal lives of people. Thank you.” (Do Read: Arjun Rampal Goes On A Dinner Date With GF, Gabriella Demetriades and Her Parents, He Looks So Happy) 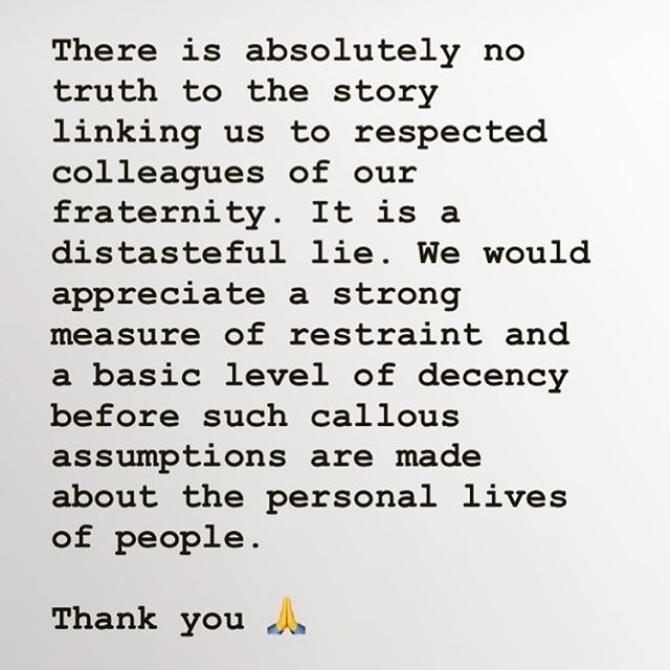 Dia had penned a post lashing out at the baseless speculations, “This is to clarify and put to rest all kind of speculation that is being bandied about by a certain section of the media regarding my separation with Sahil. It is most unfortunate to see the level of irresponsibility exercised. What is even more unfortunate is that our colleagues’ names are being tarnished and maligned by this media. As a woman I will not stand for another woman’s name being used so irresponsibly to perpetuate a lie. There is absolutely no truth to the alleged reports and no third person is the reason for Sahil and I to part ways. We have requested the media to be graceful and allow us this time for some privacy. Really hope they can respect that.” 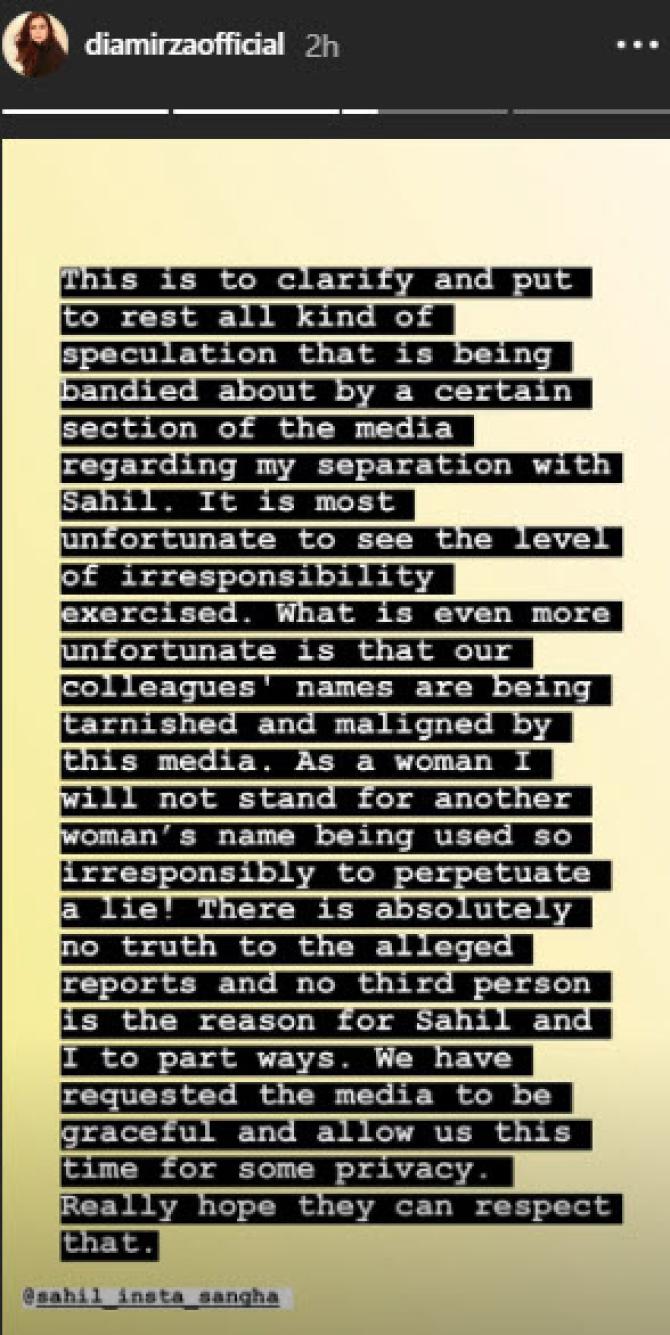 In an interview with News18 before their marriage, Sahil was asked that he and Dia are very candid about their relationship. To this, he had replied, “Honestly, I don't think there is any reason to hide our relationship. We both choose to be a certain way. The most important thing is that we both believe in relationships. We are also very transparent to the media. Today's young generation is no longer coy just to admit to having a relationship. I am a very private person, but I am not ridiculous about it. Otherwise, I will be behaving like a 16-year-old (smiles).” (Don't Miss: Neha Kaul Of 'Bahu Hamari Rajni Kant' Fame Gives Birth To A Baby Girl, Shares First Glimpse Of Her) On the other hand, in an interaction with Rediff, Dia had poured her heart about relationships and had stated, “I think certain things were relative when I made the statement. In today's world the dynamics of a relationship have changed. The level of compromise that two individuals are willing to make in their relationship has changed. It's no longer about being rich or poor it is the values that matter and if you can't find a partner who has similar values, it is difficult to walk the path together. That's why I say opposites might attract but only temporarily.” 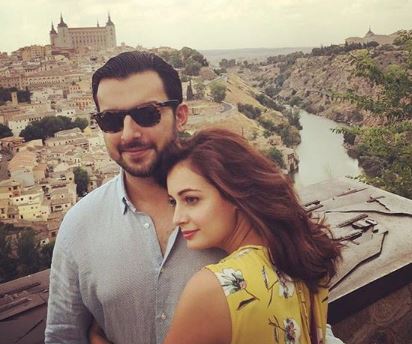 She had further pointed out the similarities that she and Sahil share, “Oh yes, the first thing that you want in a partner is a connection and more than anything else, it's a mental connection. It will be a little extreme to say that we complete each other's sentences, but I really think that we have a similar train of thought. The reason we connect is because the way we want to live our lives is very similar. We are not here to change each other, and I think at a certain level a relationship is about complementing each other.” (Checkout: Rannvijay Singha's Wife, Prianka Singha Shares Experience Of Breastfeeding Kainaat Singha In Public)

Well, as they had mentioned in their joint statement that they will be cordial with each other, Dia and Sahil have parted ways on an amicable note.