A mangalsutra holds a pious place in the Indian culture. For an Indian woman, married or otherwise, a mangalsutra is not just a piece of jewellery with black beads in it. It is so much more than that. It becomes a part of her identity that she loves to keep close to her heart.

Traditionally, a mangalsutra is made with strings of black beads and a centrepiece with Lakshmi Thali design. Today, you will see married women wearing all sorts of beautiful mangalsutra designs. Here are a few beautiful ones that were spotted on Bollywood and television actresses. 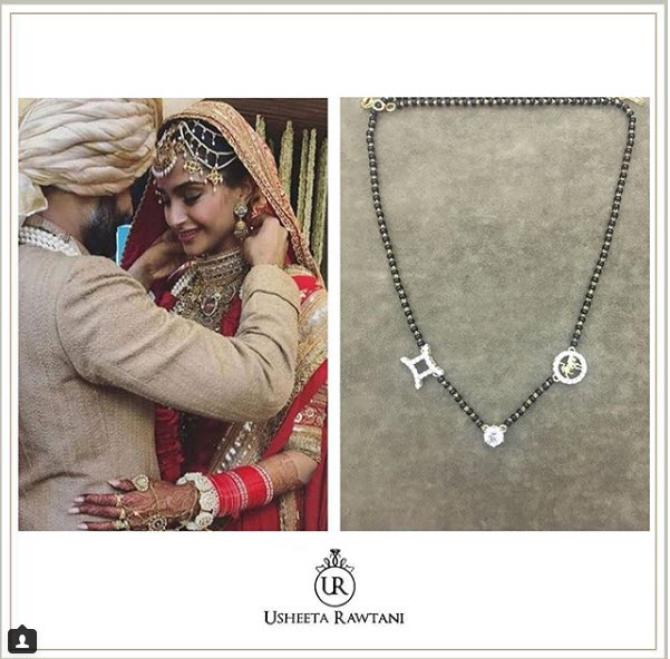 Sonam Kapoor and Anand Ahuja’s wedding was an extravagant affair. Their wedding reception was attended by all the Bollywood biggies who came sober but didn’t leave that way. Sonam Kapoor is known to mend the rules as she sees fit. She wears a gorgeous and thoughtful mangalsutra, which she designed herself, with pride. Her mangalsutra has her and Anand’s sun signs along with a solitaire in the middle. Isn’t this a cool idea?

Also Read: Sonam Kapoor's 'Mangalsutra' Is Personalised And Designed By Herself, Has A Hidden Meaning 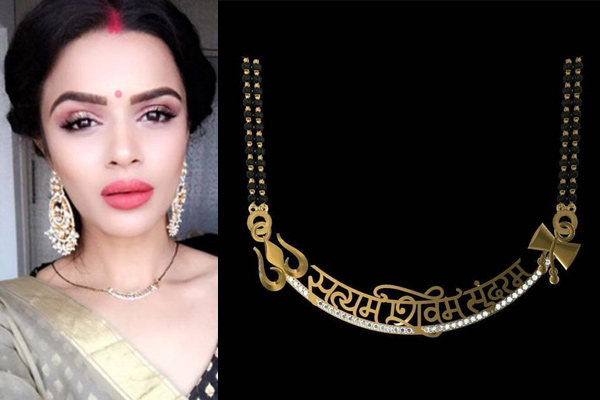 Aashka Goradia married her firangi beau in style. These days, the couple is busy with their new blog, Kiss Me There Diary, which is their romantic travel journal. Along with her choice of groom, Aashka’s mangalsutra is unconventional too. She got her mangalsutra designed by ORRA. Its centrepiece has ‘Satyam Shivam Sundaram’ written on it. We are sure that you too have never seen anything like this. 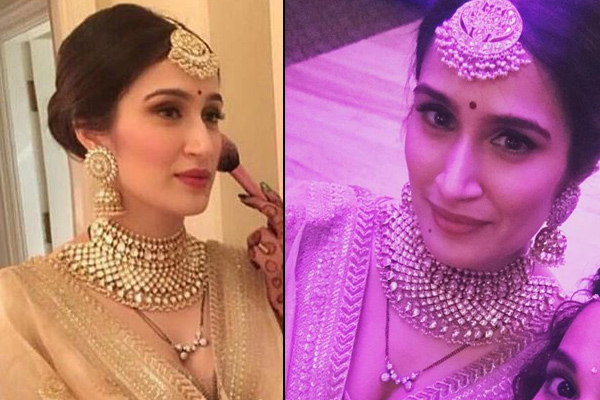 Sagarika Ghatge and Zaheer Khan’s wedding was inspired by the love story of Sagarika's character in Chak De India. Thankfully, this one is a happy one. Sagarika and Zaheer had a simple court-marriage in which Sagarika wore a gorgeous red saree by Sabyasachi. It was here that we saw her beautiful mangalsutra for the first time. It is a stylish and elegant piece with a lot of big diamonds. At a glance, the centrepiece looks like a butterfly. Sanaya Irani and Mohit Sehgal make a very bubbly couple. Their beach wedding was a dreamy affair and was attended by all of their friends and family members. Sanaya looked like a doll on her wedding day in a beautiful ivory lehenga. For the mangalsutra, she opted the traditional way. It has three gold beads attached together. 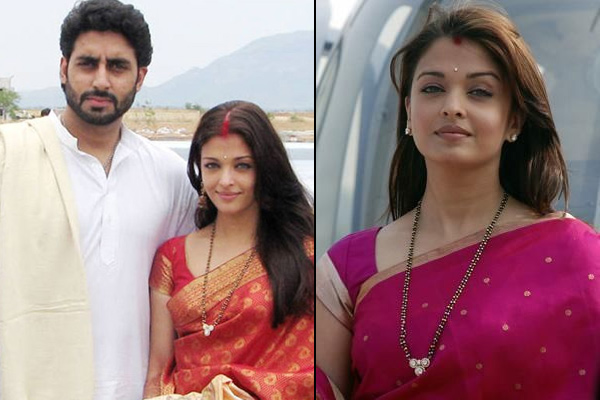 Aishwarya Rai and Abhishek Bachchan’s wedding remained the talk of the town for years. From Aishwarya’s Neeta Lula kanjeevaram saree worth 75 lakh to that giant solitaire that she flaunts happily, everything that Mrs Bachchan wore was top notch. She wears a mangalsutra worth whooping 45 lakhs. Just like her, it’s all diamonds. 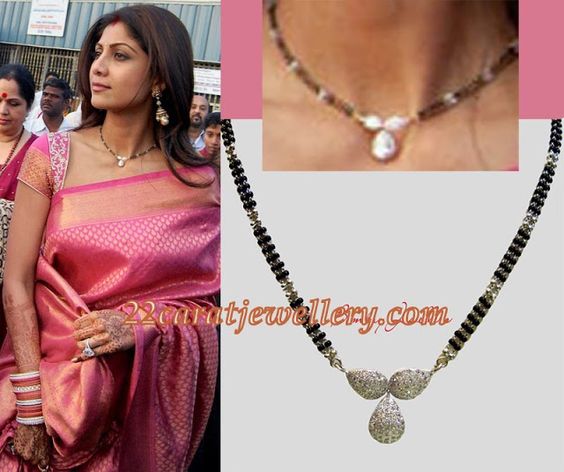 Shilpa Shetty and Raj Kundra had a big fat Indian wedding and the bride looked absolutely gorgeous. It was Shilpa who started the trend of a saree gown by wearing one at her wedding reception. Raj Kundra not only got her a giant solitaire but also a stunning mangalsutra. It is short and has three leaf-like structures made of diamonds. It is absolutely gorgeous. 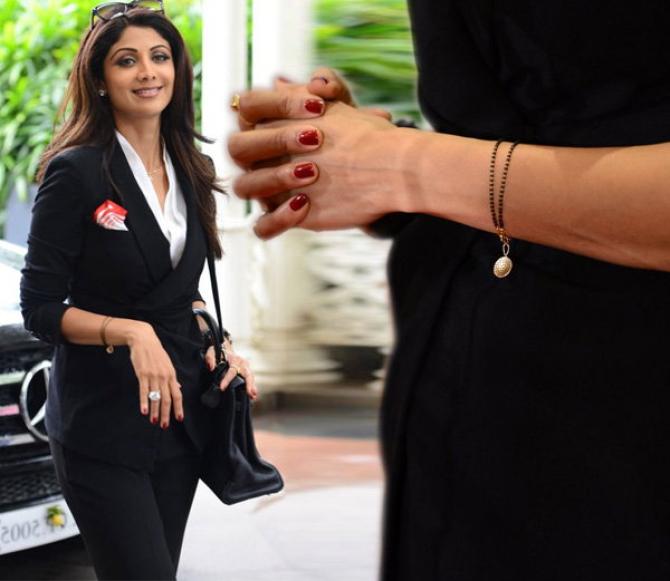 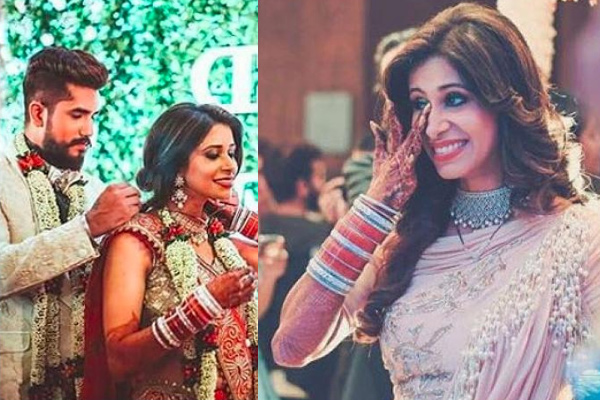 Suyyash and Kishwer’s wedding gave us serious goals. #SuKishKiShaadi became the biggest trend of the season. They invited their fan to be a part of their wedding by constantly sharing every moment through their social media platform. Kishwer shared some posts flaunting her mangalsutra. It is a minimalistic V-shaped mangalsutra that is perfect for the modern bride. 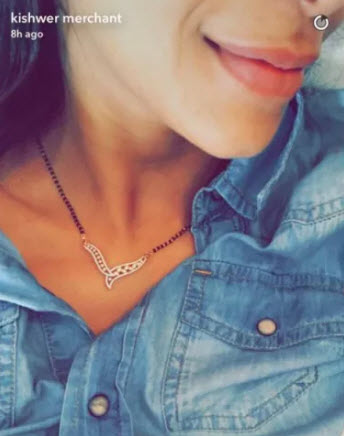 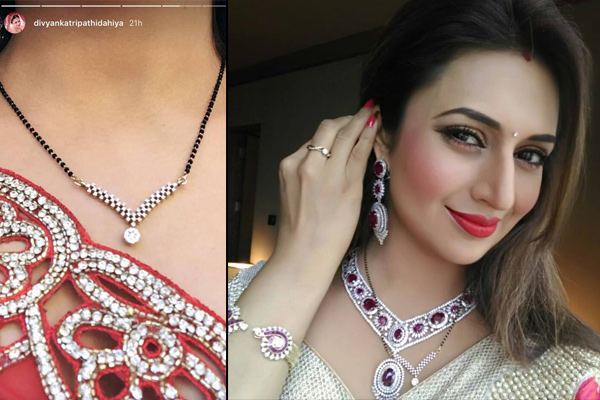 Divyanka Tripathi is one of the most loved bahus on-screen and off-screen as well. She is loved equally by her husband, Vivek Dahiya and her new family. Divyanka is very traditional in her ways and wears her mangalsutra everywhere. Her mangalsutra is contemporary in nature. It has a diamond jali design with a diamond-drop at the end. Vinny Arora and her husband, Dheeraj Dhoopar make one stylish pair. You will always find these two in the best clothes. They have style on fleck. However, when it comes to Indian wear, this couple is very traditional. Vinny wears a typical Marathi mangalsutra made of gold and black beads.

Also Read: Bollywood And TV Divas Who Flaunted Stunning Jewellery On Their Wedding And Created A Trend 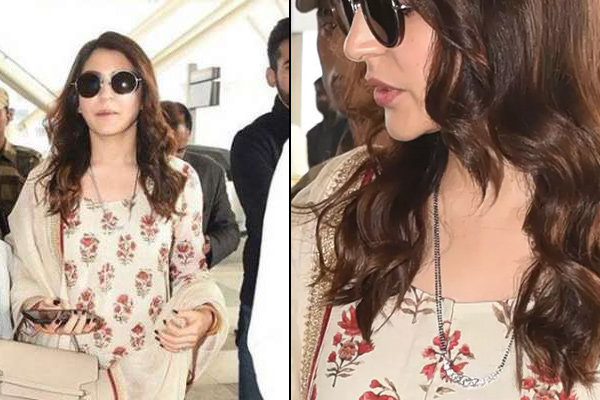 Anushka Sharma and Virat Kohli’s Tuscan wedding made us go weak in the knees. It had everything that anyone could ever dream of. Their Sabyasachi dresses and gorgeous smiles still give us butterflies. There is one more thing that we are still in awe of; it is Anushka’s mangalsutra. Her mangalsutra has a beautiful flower and costs 52 lakh.

Bharti is one person with a personality so cheerful that it makes everyone smile from ear-to-ear. When Bharti and Haarsh made their first appearance post-wedding, she was spotted wearing a really gorgeous and elaborate mangalsutra. Her mangalsutra is one of a kind and will remind you of temple jewellery. 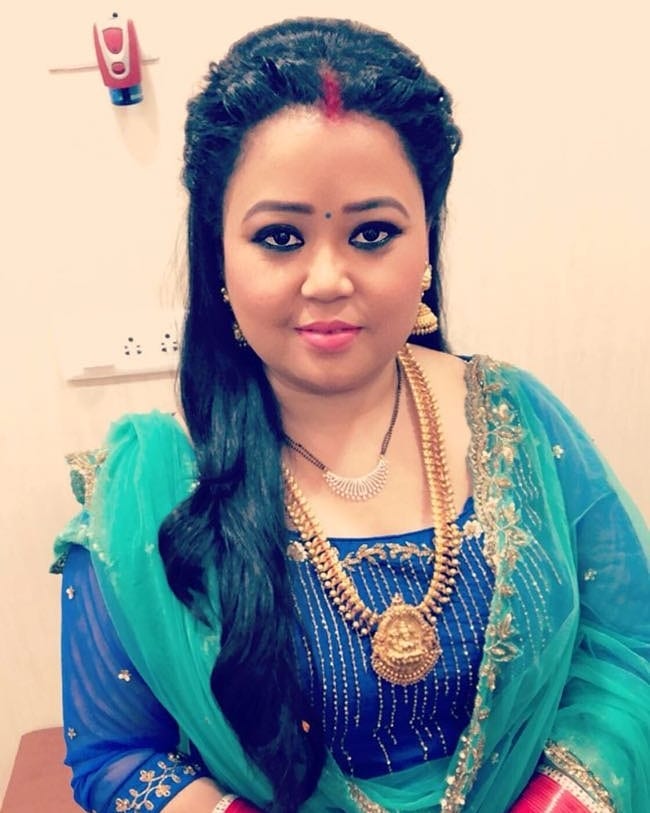 These women wear their mangalsutra with utmost pride. For them, it is an expression of love and they love to flaunt it. It doesn’t matter how many zeroes you put into getting a mangalsutra, you can never evaluate its cost. It’s priceless and precious. If you don’t believe us, ask any married woman and you will get an answer.

Next Read: 9 Bollywood Actresses Whose Wedding Outfit Had One Of The Most Expensive Price Tags