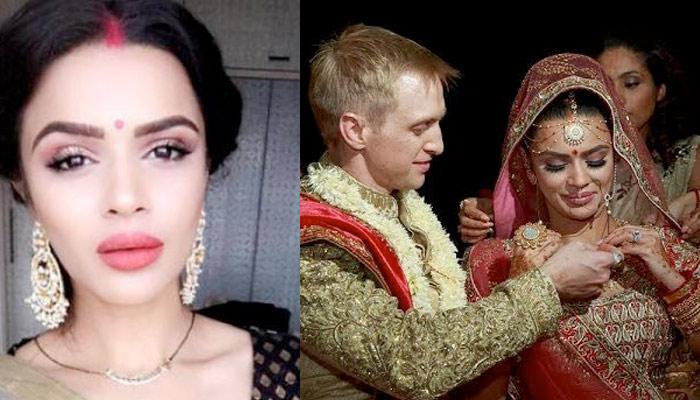 Aashka and Brent looked spectacular in all the ceremonies, but our favourite was their Hindu wedding look in which Brent wore a Sherwani and Aashka wore a rust-coloured lehenga. If seeing Brent in a Sherwani wasn't enough, he came on a horse in his Baraat and his dance was nothing but ENTERTAINMENT, ENTERTAINMENT and ENTERTAINMENT!

This beautiful actress has won many hearts with a plethora of spectacular roles that she played in the past. And, the recent one was the famous Colours TV show, Naagin where the actress bagged a lot of appreciation. While she won many hearts in the show, she broke many hearts when she got engaged to her firang boyfriend, Brent Goble. (Recommended Read: Aashka Goradia Recalls The Day When She And Her Hubby Brent Goble Sealed Their Love With A Kiss)

From the time they got engaged on December 25, 2016, the Aashka-Brent news flowing in on a regular basis gives us the surety that they are an unconventional couple and have done everything in a unique way. We talk about their pre-wedding function to their proposal to the unique wedding card; everything was done in a perfect manner.

Her friends from the industry set the stage on fire on her sangeet night, when they decided to perform for the lovely couple! In case you haven't yet seen Mouni dancing for her bestie Aashka, take a look here!

Aashka, like a cool bride, entered her wedding, dancing her heart out on the song 'Dhating Naach' and inspired all the brides-to-be to follow her footsteps (See Video). All the outfits and jewellery worn by Aashka were designed to complement her personality, but what we loved the most was the unique design of her Mangalsutra!

The stunning and hatke design of her 'Mangalsutra' is sure to give major goals to all the brides-to-be. Her unique mangalsutra, which has been designed by the famous jewellery brand, ORRA. Aashka always wanted to wear something which symbolises marriage, reflecting tradition and thanks to this jewellery brand that suggested a customised mangalsutra.

Here is the image of the actress’s mangalsutra and it's super unique.

The customised piece says ‘Satyam Shivam Sundaram’ written on it and there is one more interesting thing related to this quote. This quote is not only on Aashka’s mangalsutra, but it is her new tattoo and they have used this phrase on their wedding card too. How cool and theme based this is, right?

Also Read: 18 Famous Indian Television Celebrities Who Got Secretly Married And Gave Us A Sweet Surprise

It’s really amazing to know how closely she’s associated with the tradition and culture and how minutely she has paid attention to these details that she wanted this phrase on her mangalsutra too. You truly deserve an applaud, Aashka!

The design looks so amazing that we wonder how magical the moment would have been when Brent tied this Mangalsutra in his wife, Aashka's neck. What do you think about her mangalsutra design? Would you also like to customise your Mangalsutra or any other jewellery for your D-day? Do let us know in the comments section.