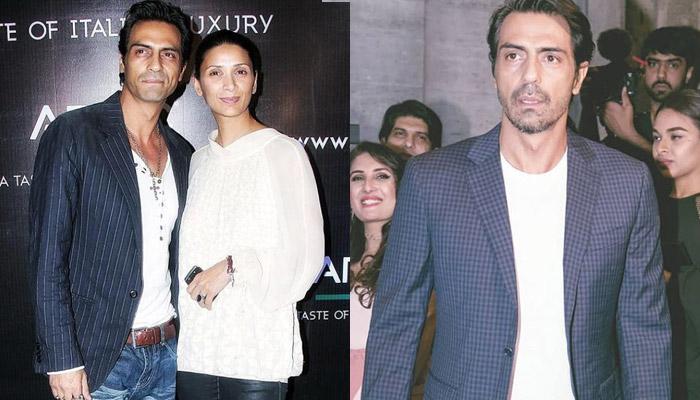 Just recently everyone was thundered when the news of one of the most compatible and loving couples of Bollywood parted ways. The mention is of none other than Nastik actor Arjun Rampal and his estranged wife Mehr Jesia. The couple has parted ways after enjoying 20 years of their blissful married life. But it was undoubtedly a shock for one and all when they announced their separation. (Also Check: Tanishaa Mukerji's Ex Armaan Kohli Accused Of Physical Assault By Girlfriend Neeru Randhawa)

Arjun Rampal and Mehr Jesia released a joint official statement announcing their split. And within just a few days of their separation, the buzz is that Arjun has probably moved on. As per a source by DNA, the actor has probably found solace in a model-actress-Serbian dancer, Natasa Stankovic. The source was quoted as saying, “Arjun and Natasa got acquainted while working on Daddy and they have apparently kept in touch with each other.’’

Natasa is the same girl who had performed on the song Dance Dance in the actor’s production Daddy. She was first seen in Prakash Jha’s Satyagraha. Not just this, Natasa also participated in the eighth season of Bigg Boss and was a part of the famous DJ Wale Babu video by Badshah. She can also be seen in various advertisements. She was last seen in Fukrey Returns dance number, Mehbooba. (Don't Miss: Disha Patani Finally Talks About Her Alleged Relationship With Co-Star Tiger Shroff)

For the ones who don’t know, as per the report, one of the reasons behind the split between Arjun Rampal and Mehr Jesia is Hrithik Roshan’s ex-wife, Sussanne Khan. Their increasing friendship made Mehr grew insecure. A close friend had earlier revealed, “When his equations with many industry friends were worsening, his friendship with Sussanne only strengthened over time and Mehr grew extremely insecure. It led to several fights between the couple.” The source further added, “Mehr and Sussanne yelled at one another before Mehr stormed out of the party. The two have not spoken to each other since.”

Arjun Rampal and Mehr Jesia's official statement announcing the separation could be read as, “After a 20-year-long beautiful journey filled with love and beautiful memories, we would like to share, that all journeys have different paths. We feel that it is time for us to move on to different destinations henceforth.”

It further stated, “We have always been solid when it has come to us, we will continue to be solid for each other and our loved ones, as we embark upon a new journey...Both of us being extremely private people feel strange to be making this statement, but such are the circumstances of our lives. Where the truth can get distorted and lost. We are a family, our love for each other is forever intact and we shall always be there for one another and most importantly, for our children Mahikaa and Myra. We would, therefore, appreciate our privacy through this time. Thank all for their support. Relationships can end, but love lives on. We won’t be commenting on this any further.”  (Also See: Akash Ambani And Shloka Mehta's 'Save The Date' Invite For Their Engagement Is Out, Video Inside)

Well, is there something seriously brewing between Arjun Rampal and Natasa Stankovic? We will have to wait for either of them to speak about it! Just today morning, the Bollywood freaks and the ones who loved this couple were all jolted by their separation news. While any celeb wedding makes fans crazy, the celeb divorces, break-ups and separations shake them to the core even more. Such kind of shock fans experienced when famous Bollywood faces