In India, celebrities are a trend-setter. From their fashion to their style, their fans want to imitate every aspect of their idols’ lives. One such celeb, or rather a celeb couple, who has made one hashtag so popular on social media that on the days of their wedding functions, it was trending like how. (Also Read: Divyanka's Ex-BF Ssharad Malhotra Breaks Up With GF Pooja Bisht Ending Their 2 Years Of Relationship)

Yes, you guessed it correctly. We’re indeed talking about Sonam Kapoor Ahuja and Anand S Ahuja. Their hashtag #EverydayPhenomenal, was the most popular hashtag on Twitter and Instagram on their wedding day i.e. May 08, 2018. And in an Instagram post, Anand has now described what the hashtag really means.

Sharing the following picture, Anand wrote, “The meaning and notion behind #EverydayPhenomenal is best described by this poem, one of my favourites.” And then, he wrote an excerpt from a famous Emily Dickinson poem, “Who has not found the heaven below, Will fail of it above. God's residence is next to mine, His furniture is love”.  (Don't Miss: Kartik Aaryan Of 'Sonu Ke Titu Ki Sweety' Fame Was Once Dating One Of These 'Dangal' Actresses)

He further added, “#MahatmaGandhi taught us that our words become our actions which in turn become our habits, our values and ultimately our destiny. #EverydayPhenomenal reminds @sonamkapoor of the importance of appreciation, positivity, and gratitude...that happiness is not something you get, it’s something you are”. (Also Read: Shabir Ahluwalia Has The Most Heart-Warming And Sweetest B'Day Wish For Wife Kanchi Kaul)

Well said, Anand! If we really want to make our everyday phenomenal, we must follow these words of wisdom by Emily Dickinson and Mahatma Gandhi. It’s not outside, it’s all inside. In fact, in her latest Instagram post, Sonam very sweetly captioned a couple picture with her hubby, and that obviously with their signature hashtag- EverydayPhenomenal. Take a look:

Speaking of the poems, do you know that Sonam has a collection of poems which she has written over the years? It’s Anand’s now. Yes, earlier in the Simi Garewal show, Sonam had revealed that, expressing her desires, dreams and expectations from her man which she has penned down in words, she has a collection of self-written poems for her future husband. Now that she has her hubby now, we guess Sonam has handed over those to Anand. 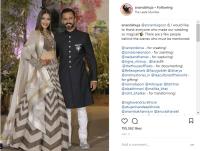 She was quoted as saying, “I have written quite a few poems but there was this one poem that I wrote when I was around 16 years old. It is called Ambition. I had promised myself that as soon as I find the person that I'm going to be with, I'm going to give him that poem. The day I get married, the poem will be with that man and I'll say that this is what I want my life to be like and hopefully, we can work together towards this”. 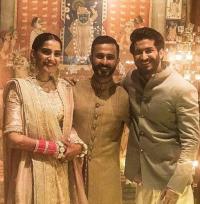 For those who do not know, Sonam Kapoor and Anand Ahuja got married on May 08, 2018 at Rockdale, Bandstand, Bandra. It was a Sikh wedding which followed the traditional Anand Karaj ceremony ritual.

Next Read: 'Judwaa' Actress Rambha Is Pregnant With Her Third Child, Poses With Baby Bump