After the series of sad news from the house of Bachchans, there is a slight ray of good news as Amitabh Bachchan and Abhishek Bachchan might get discharged soon. Check out the details inside! The last week came as a shocker for the entire nation when one of the most affluent families of nation and B-town, the Bachchans were tested positive for the novel Coronavirus. On July 11, 2020, the news of Bollywood actor, Amitabh Bachchan being tested positive for COVID-19 had come out. Followed by the news of his son, Abhishek Bachchan, his daughter-in-law, Aishwarya Rai Bachchan and his grand-daughter, Aaradhya Bachchan also testing positive for COVID-19. (Also Read: Ranbir Kapoor Revealed The One Thing That He Thinks He Cannot Do like His Late Father, Rishi Kapoor)

Shenshaah of Bollywood, Amitabh Bachchan had himself confirmed the news of testing positive for COVID-19 on his Instagram handle and had posted a picture of himself, and had captioned it as "This evening I tested positive for COVID 19 .. have been shifted to Hospital .. authorities informed .. family and staff tested results awaited .. all those that came in close proximity to me in the last 10 days please get yourself tested." Post this, Abhishek too had confirmed the news of testing positive using his social media handles. 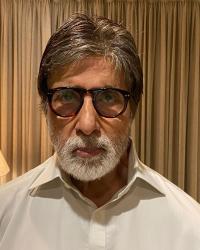 Well, now we have a good news for you! After admitting at Mumbai’s Nanavati Hospital for more than a week, the father-son duo of Amitabh Bachchan and Abhishek Bachchan are on their road to recovery. According to a report in Zee News, Big B and Junior B are likely to get discharged soon. Their sources revealed that Amitabh Bachchan and Abhishek Bachchan are responding well to the treatment and will be soon discharged from the hospital. However, Aishwarya Rai Bachchan and daughter, Aaradhya Bachchan will stay in the hospital.

Bollywood actress, Aishwarya Rai Bachchan and her daughter, Aaradhya Bachchan were initially home quarantined after testing positive for having mild symptoms of COVID-19, but now they are admitted to Nanavati hospital for treatment. The 46-year-old actress and her 8-year-old daughter had tested positive for COVID-19 last week. As per reports in the Hindustan Times, Aishwarya and Aaradhya had complained of breathlessness, after which they were admitted to hospital. A hospital source had told PTI, "Both Aishwarya and Aaradhya were admitted to Nanavati hospital today. They are fine. Aishwarya needed medical attention." 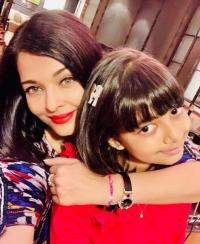 Talking about how the Bachchans might have contracted the virus, ABP news had some solid claims. According to reports by ABP news, it was mentioned that Abhishek Bachchan might have come in contact of the virus when he had visited a dubbing studio in Versova on July 8, 2020, for dubbing of his recently released web-series, Breathe: Into The Shadows. However, the reports were later-on quashed as nobody from the dubbing studio had tested positive for the Coronavirus. 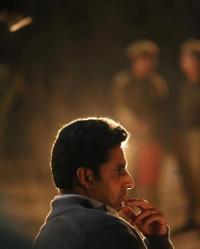 There was another theory as well, according to which, the bungalow of Bachchans, Jalsa which is in Juhu, was considered to be in the vicinity of COVID-19 hotspot, Andheri. As they reside with family in their lavish bungalow Jalsa, the Bachchans might have caught the virus via local transmission. After almost the whole Bachchan clan testing positive for COVID-19, all of Amitabh Bachchan's four bungalows - Pratiksha, Janak, Vatsa and Jalsa, where the actor currently lives with his family, were sealed. (Don't Miss: 'Bidaai' Fame, Sara Khan Regrets Marrying Ex-Husband, Ali Merchant On 'Bigg Boss' [Details Inside]) Amitabh Bachchan has been very active on social media since he was hospitalised and has been thanking millions of his fans for their prayers and the hospital staff as well, in different posts. Thanking his fans for their support and prayers, Big B had taken to his Twitter handle and had written, "In happy times, in times of illness, you, our near and dear, our well wishers, our fans have ever given us unstinting love, affection care and prayer .. we express our bountiful gracious gratitude to you all .. in these circumstances hospital protocol, restrictive!" He had also expressed his gratitude towards the medical staff for doing such an incredible job in this pandemic. (Recommended Read: Parul Chauhan Of 'Bidaai' Fame Shares Happy Unseen Wedding Pictures With Hubby, Cherag Thakkar) 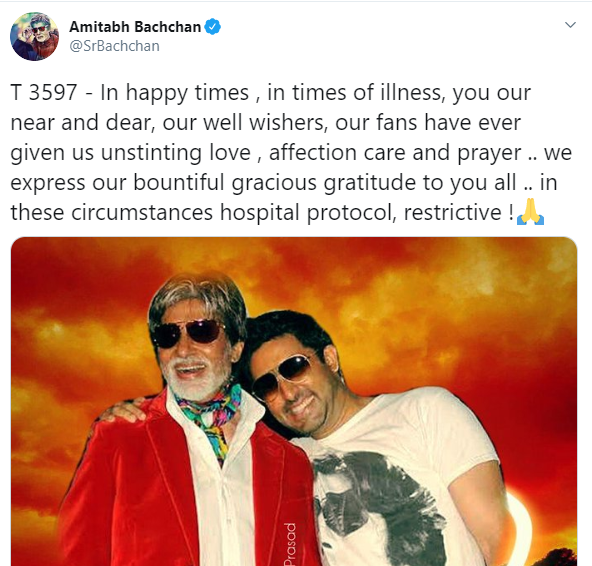 The prayers have worked well and we wish a speedy recovery to the father-son duo! 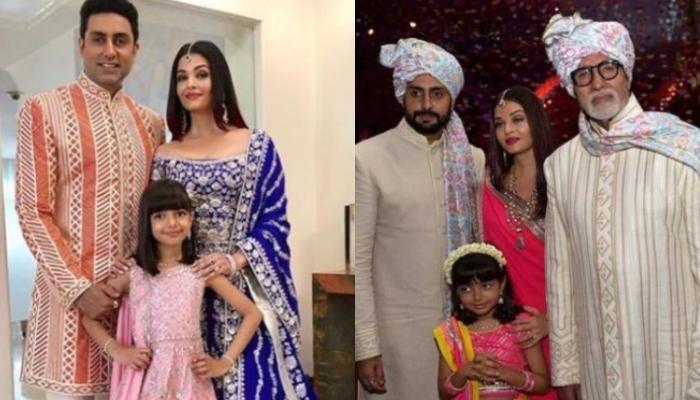