On January 19, 2023, Anant Ambani got engaged to his childhood sweetheart, Radhika Merchant. However, it was the look of the Ambani ladies at the event that caught the limelight.

The Ambani clan is one of the richest families in the world, and yet they never fail to impress us with their age-old legacy. On January 19, 2023, Nita Ambani and Mukesh Ambani’s younger son, Anant Ambani, got engaged to his childhood sweetheart, Radhika Merchant. The engagement ceremony took place at their extravagant residence, Antilia, at Altamount Road, Mumbai. The glimpses of the same have surfaced on the internet, and it’s hard not to gush over them.

For those who have been living under the rocks, Anant Ambani and Radhika Merchant had a roka ceremony at Srinathji temple in Rajasthan back in December 2022. And now, their pre-wedding festivities have begun with a grand engagement ceremony. The pastel and white-themed event was a starry night, which became the talk of the town in no time.

The Ambanis love to celebrate every little occasion like a festival, choosing vibrant outfits and enjoying to the fullest, and Anant Ambani’s engagement party was no exception. Talking about Ambani ladies’ fashion, it is not just expensive, but also a great reflection of their royal personalities. From Shloka Ambani's ethereal multi-hued lehenga to Radhika Merchant's golden glamour and Nita Ambani’s ageless look, the beauties of the Ambani clan served ace looks at the party.

For her engagement, Radhika Merchant opted for a regal golden-hued lehenga from the shelves of ace designer, Abu Jani Sandeep Khosla. The bride-to-be looked like a vision in her beautiful outfit, which was adorned with intricate embroidery and sequin embellishments. Styling her look with a matching dupatta, she donned a thin golden belt on her waist to elevate her look.

Talking about her accessories, Radhika completed her look with a statement diamond necklace, matching earrings, bangles and a maang teeka. The bride-to-be opted for a subtle makeup look and a half-tied hairdo adorned with diamond hair chains that added a touch of elegance.

Nita Ambani looked like a timeless beauty at her son, Anant Ambani's engagement ceremony to Radhika Merchant. Dressed in an Abu Jani Sandeep Khosla saree draped in a traditional Gujarati style, Nita Ambani made for a stunning beauty for the night. Her heavily-embroidered, beige-hued ensemble featured a contrasting red-hued border, which added a pop of colour. She accentuated her look with a gold and diamond choker neckpiece, a multi-layered haar, matching earrings and a maang teeka.

Nita Ambani opted for an ageless makeup look which included a blended foundation, softly highlighted cheekbones, nude glittery eyeshadow, kohl-rimmed eyes and mascara-laden eyelashes to increase the glam quotient. She opted for a traditional low-rise bun hairdo and exuded radiance and charm with her look.

Shloka Ambani flaunted her ethereal beauty in a glittery traditional Abu Jani Sandeep Khosla lehenga for Radhika Merchant and Anant Ambani's engagement ceremony. Opting for a minimal yet radiant look, Shloka donned a multi-hued heavily embroidered lehenga with tassels detailing and paired it with a mirror work blouse. Shloka also opted for a sheer dupatta to add a royal look to her attire. 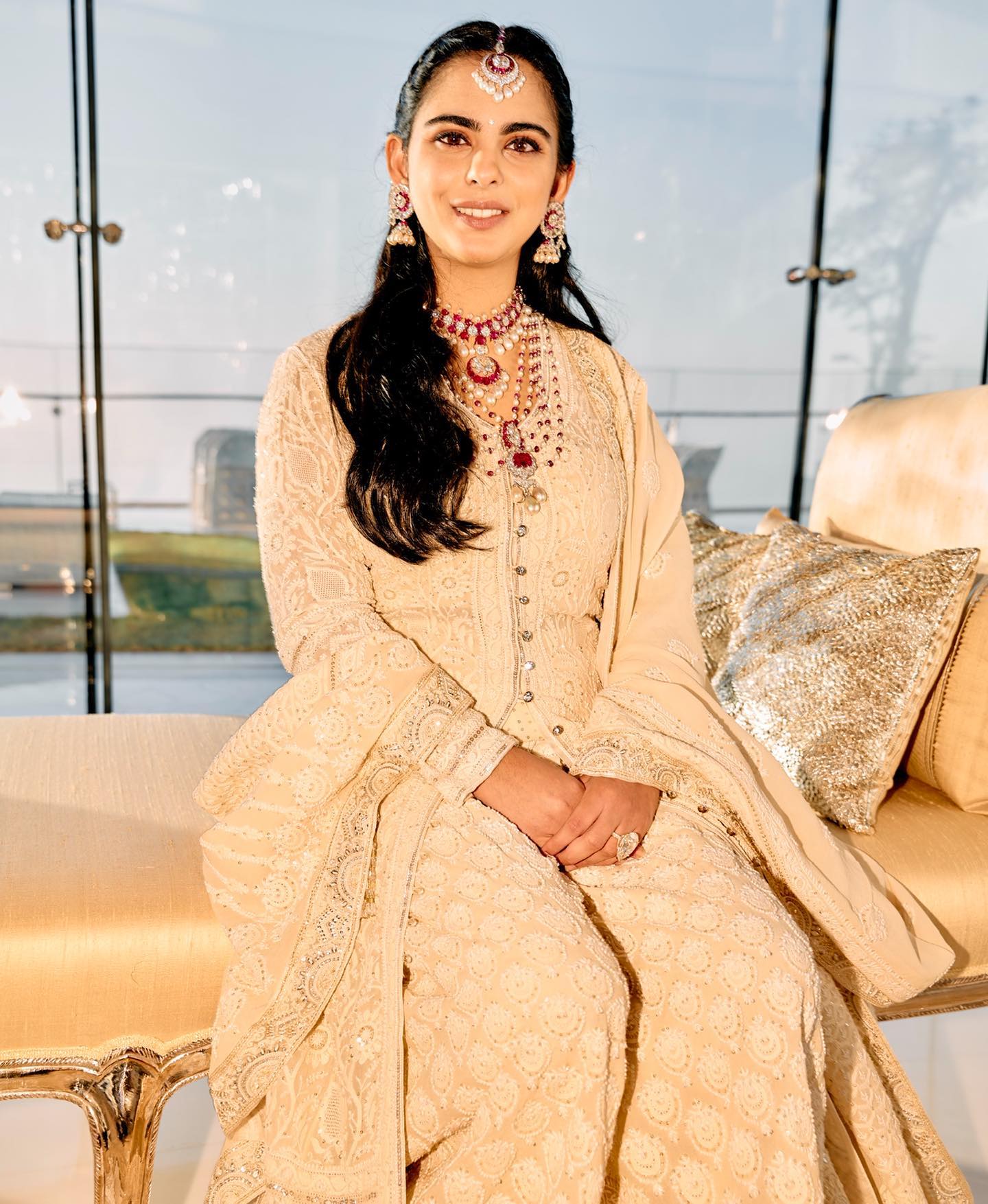 Isha Ambani looked stunning in a white-hued anarkali suit, which was adorned with heavy chikankari work and featured a front slit. Isha's regal outfit was from the shelves of designer duo, Abu Jani Sandeep Khosla. To amp up the glam quotient, she opted for some regal jewels, which included heavy necklaces with ruby drops, a maang teeka and a matching pair of earrings. She completed her look with a pulled-back hairdo adorned with a pearl hair string accessory.

Anant and Radhika's engagement ceremony was also attended by Anil Ambani and his wife, Tina Ambani, who graced the event in style. For the ceremony, Tina opted for a brown-hued floral-printed silk saree which made her look stunning. The six yards of her shimmery outfit had a broad golden border, and it was perfectly paired with a golden blouse. To accentuate her look, she donned stone-embedded jewellery, which included an emerald choker necklace, a multilayer pearl necklace, matching earrings, and bangles. Dewy makeup, an open hairdo and a golden potli bag rounded off her look. Last but not least, it was Kokilaben Ambani, who looked like a sublime beauty in her pristine white saree, which featured intricate silver embroidery on its borderline. She paired her saree with a matching semi-sleeved blouse and accentuated her look with nude makeup and a bindi. Keeping her look minimal yet elegant, Kokilaben accessorised her outfit with a pearl neckpiece and diamond studs.

Which of the Ambani ladies' looks did you like the most? Let us know.