Jr NTR and his wife, Lakshmi Pranathi twinned in black as they attended the Golden Globes Awards 2023. However, it was the star wife's expensive arm candy that grabbed eyeballs.

South Indian superstar, Jr NTR is one of the biggest names in the world of Telugu cinema, and his stardom knows no bounds. The actor hardly makes any public appearances with his family, but whenever he does, he never misses a chance to make headlines. On the other hand, his wife, Lakshmi Pranathi is a fashionista, who always swoons our hearts with her sartorial picks. The gorgeousness perfectly knows how to style high-end brands and flaunts her simple look with elegance.

Jr NTR and his wife, Lakshmi Pranathi twin in black at the Golden Globes awards

On January 11, 2023, Ram Charan took to his IG handle and shared a stunning picture of the RRR family, as they attended the Golden Globe awards. The actor treated his fans with a happy picture from Los Angeles, in which Jr NTR looked dapper in a black tuxedo, while SS Rajamouli and Ram Charan twinned in black-coloured traditional ensembles. The picture also featured their better halves, Lakshmi Pranathi, Upasana Kamineni and Rama Rajamouli. Sharing the photo, the actor penned a note, which can be read as:

"THE #RRR FAMILY! On the way to the GOLDEN GLOBES." 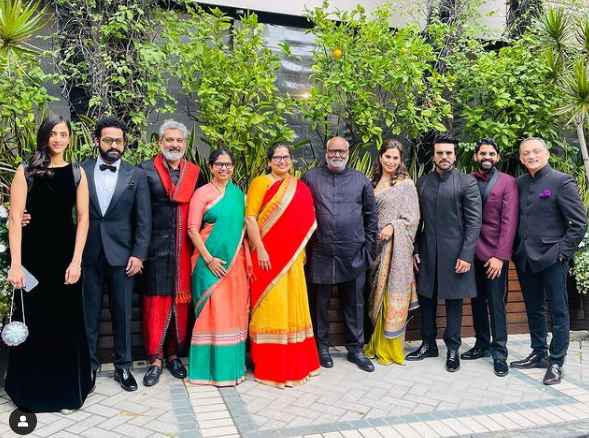 However, what caught our attention was the gorgeous arm candy that Lakshmi Pranathi was seen holding in her hand. The star wife was dressed in a black-hued bodycon outfit and exuded simplicity. Keeping her tresses open, Lakshmi accessorised her look with a stunning clutch. For the unversed, Lakshmi's splendid Peony clutch bag was from the shelves of the luxury brand, Judith Leiber. However, if you wish to get your hands on this expensive arm candy, it will cost you a whopping sum of Rs. 4,24,262. Check it out:

This is not the first time that Lakshmi has been spotted wearing high-end brands. Earlier, Jr NTR was spotted at the special screening of his hit film, RRR, with his wife, Lakshmi Pranathi, and their two kids, Nandamuri Bhargav Ram and Nandamuri Abhay Ram. For the outing, Lakshmi opted for a simple look, which included pastel pants and RRR logo t-shirt. She styled her look with a pink shoulder bag. Reportedly, Jr NTR had stepped out with his family for an event after 3 years. 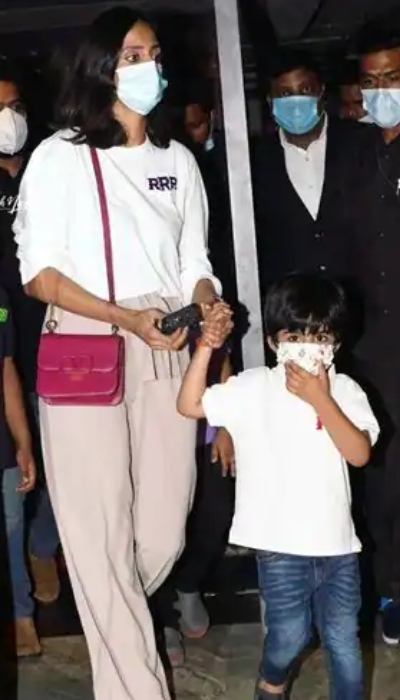 While we loved Lakshmi's stylish look, our eyes were glued to her pink sling bag. Upon doing some research, we found out that Lakshmi's sling bag is from the brand, Valentino. On the official website of the brand, the shoulder bag was priced at a whopping amount of Rs. 2,01,345. Check it out below: 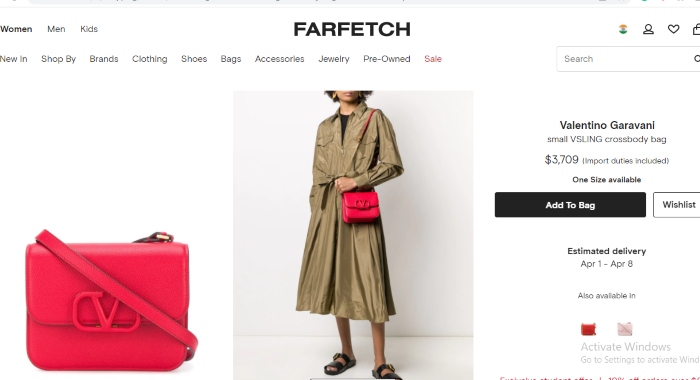 Jr NTR and Lakshmi Pranathi's wedding is one of the most expensive weddings of all time with a total budget of Rs. 100 crores

South Indian superstar, Jr NTR got married to Lakshmi Pranathi on May 5, 2011. Their wedding was one of the most expensive weddings of all time, as according to reports, the total budget of the lavish wedding was Rs. 100 crores. Another interesting fact about Jr NTR's wedding is that his wife, Lakshmi had donned a saree worth Rs. 1 crore. However, what took everyone's breath was the gigantic cost of Rs. 18 crores to decorate the mandap. Apart from all the money being spent on the lavish wedding, Jr NTR's wedding had become historic after 3000 celebrity guests, and 12,000 fans had attended it. It was truly the wedding of a superstar! 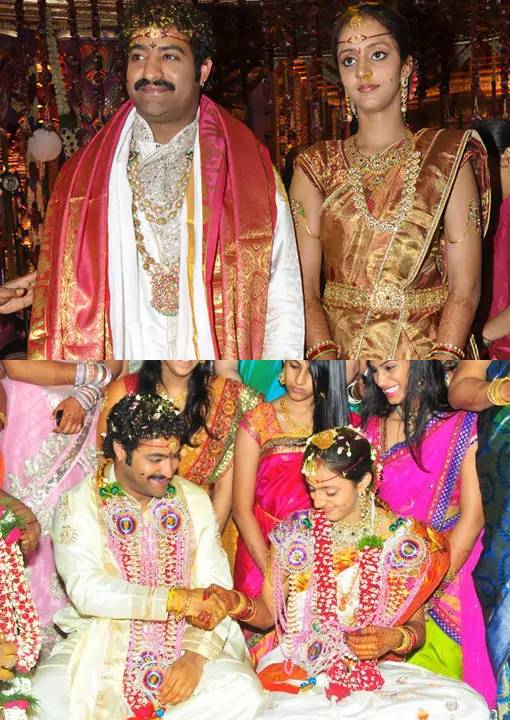 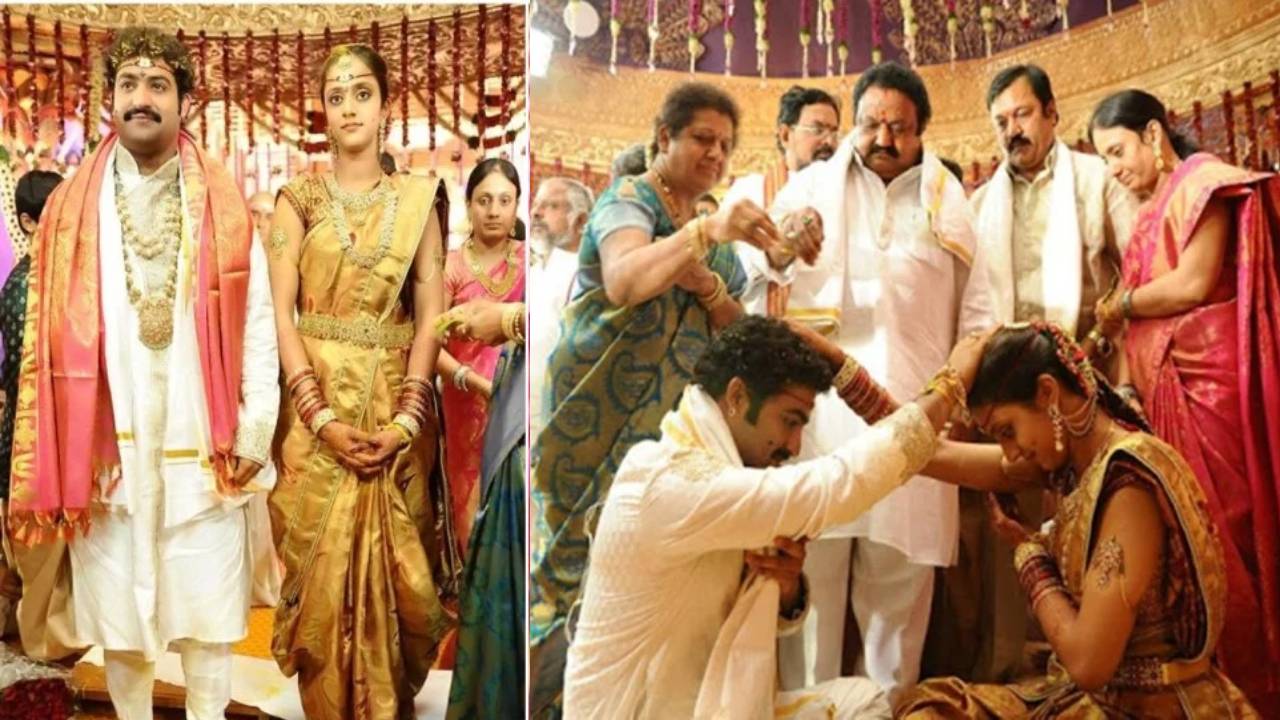 We loved Pranathi's expensive arm candy. What about you?