When it comes to fashion, Sonam Kapoor is a stunner, and she knows how to ace the style game. Let's have a look at her luxurious wardrobe.

Whenever we talk about the popular fashionistas of Tinseltown, the first name that comes to our mind is of Sonam Kapoor. She is undoubtedly the style icon of Bollywood. Whether it is wearing a high-end couture label on the red carpet or slaying in her sartorial choices, Sonam never fails to impress her fans with her outfits. The actress is a true fashionista, and there is no second thought to it. If there is a star, who always wins the hearts of the fashion police, it has to be Sonam Kapoor.

Sonam's outfits, her classy shoes and bags make us believe that the diva believes in extravagant fashion. She is often seen decked up in extravagantly expensive fashion labels. As fashion junkies, we would never want to miss a chance to have a sneak peek into her wardrobe, which is full of expensive things, from vintage to couture. So, without further ado, let's have a look into her expensive wardrobe. 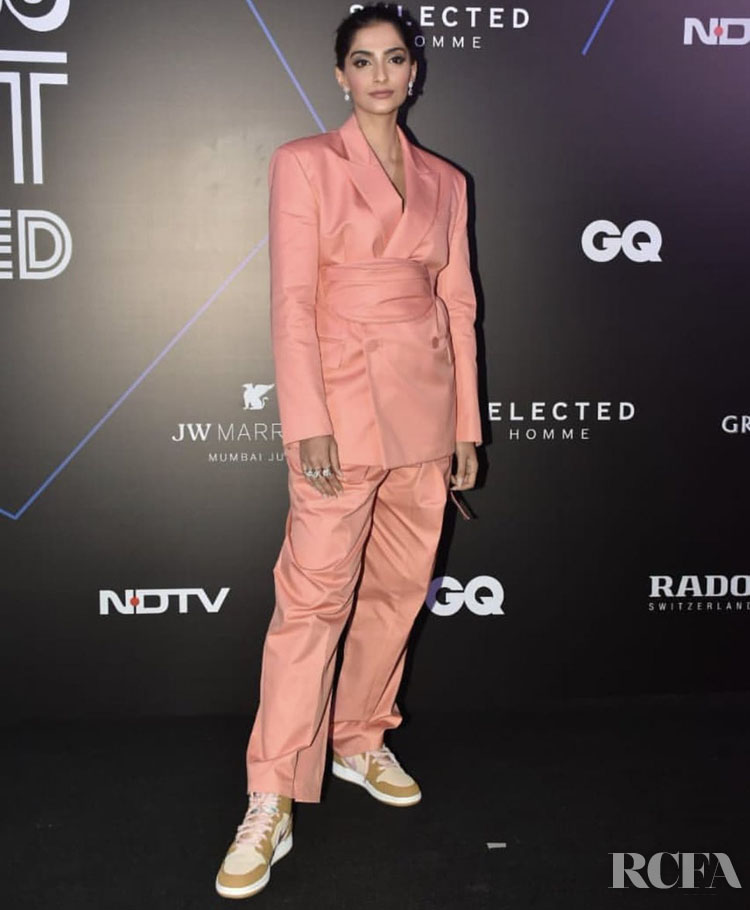 Pantsuits have become a staple in every girl's wardrobe as it is the latest trendy outfit. Sonam Kapoor also loves to flaunt her pantsuits, and once, she had opted for a fabulous pink-coloured pantsuit from the label, Fenty. The actress had teamed it with bulky sneakers. However, it was the cost of this gorgeous outfit that left our jaws dropped. Sonam's Fenty pantsuit costs a whopping sum of Rs. 80,000. 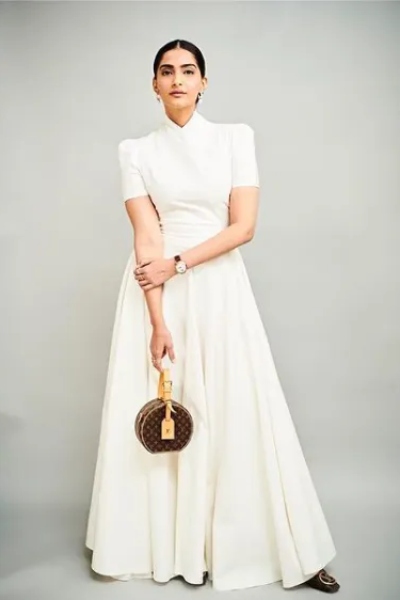 Sonam Kapoor had once opted for a white maxi gown featuring a pulled up neck and had looked gorgeous. She had styled her look with a tiny Louis Vuitton tote, which had perfectly complemented her outfit. While we were gushing over Sonam's look, the cost of her tiny bag had blown our minds. Reportedly, the LV tote comes with a price tag of Rs. 2,43,000. 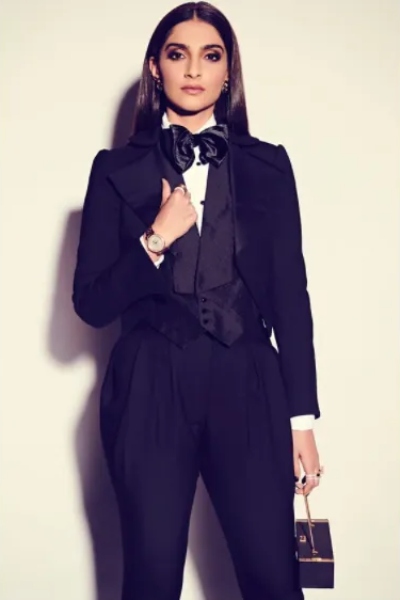 Another pantsuit in Sonam Kapoor's wardrobe is from the brand, Ralph Lauren. Indeed, it is one of Sonam's best looks so far, and it is perfect for an event. Sonam had opted for this Ralph Lauren suit and had styled it with a bowtie. She had completed her look with dramatic eyes and nude lips, and her hair was pulled back. Surprisingly, the stunner had made a mark in her pantsuit, which costs a hefty amount of Rs. 4,36,728. For one of her airport looks, Sonam Kapoor had dressed in a pretty dress from the brand, Fendi. She had styled her look with a matching monogrammed bucket bag and had looked fabulous. Sonam's Fendi bag costs a sum of Rs. 1,50,900, but it was worth every penny. 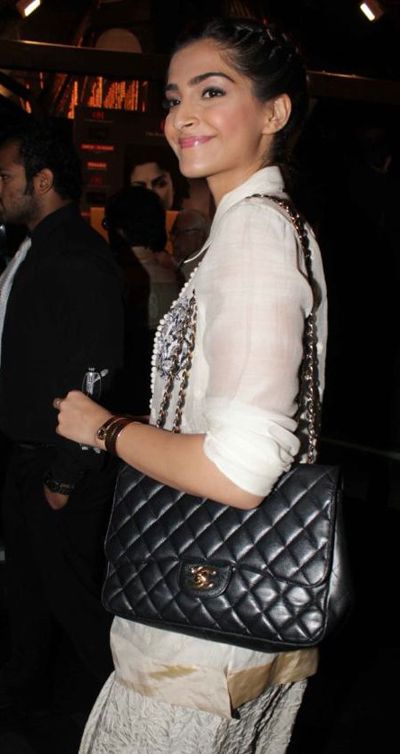 Every fashionista is well aware that a Chanel quilted handbag is an absolute must in their wardrobe. However, we also know that Chanel bags have a whopping price tag. Sonam Kapoor, who is a proud owner of a black bag by Chanel, had spent an amount of Rs. 7,21,000 to get her hands on this piece. Sonam Kapoor's brother, Harshvardhan Kapoor had once shared a series of pictures with his sister. The actress had looked stunning in a frill white dress featuring balloon sleeves in the photo. She had accessorised it with a silver necklace, round-rimmed shades, and a black tote. Sonam's comfy cotton dress was from the shelves of the Danish designer, Cecile Bahnsen, and it costs around Rs. 91,724. 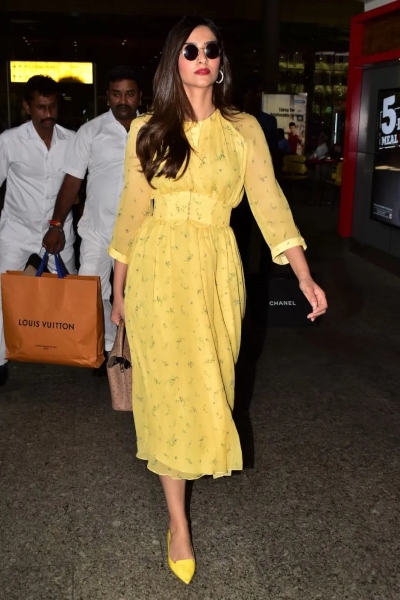 For one of her airport looks, Sonam had donned a gorgeous yellow sunflower dress from the Russian designer, Ulyana Sergeenko. She had looked like a sight to behold. She had completed her look with bright red lips and tiny hoops and had swooned our hearts. Sonam's pretty dress costs 800 GBP, which in Indian currency comes around a whopping sum of Rs. 80,000. 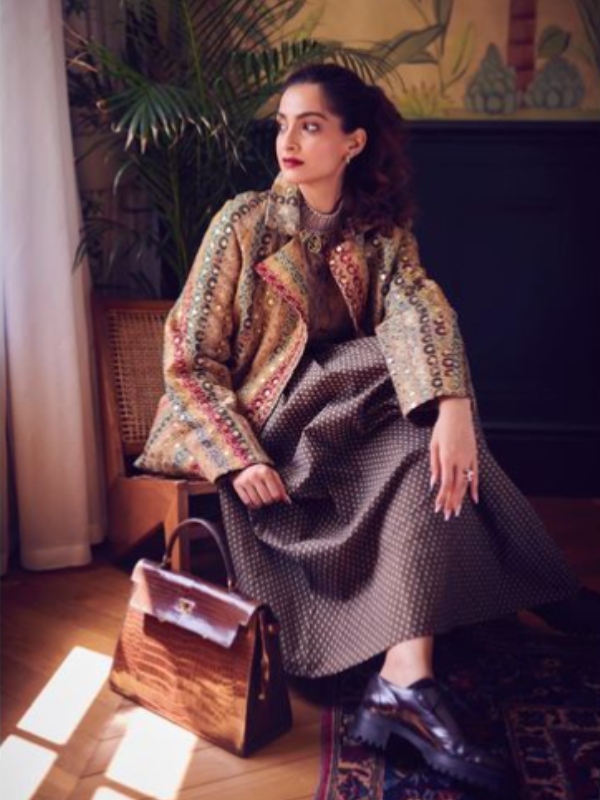 Sonam Kapoor loves to flaunt her arm candies, and she never misses a chance to make heads turn with her luxurious bags. However, one of the most expensive bags in her collection is the Hermes Grace Kelly bag. Reportedly, the stunning bag costs over Rs. 8 lakhs. 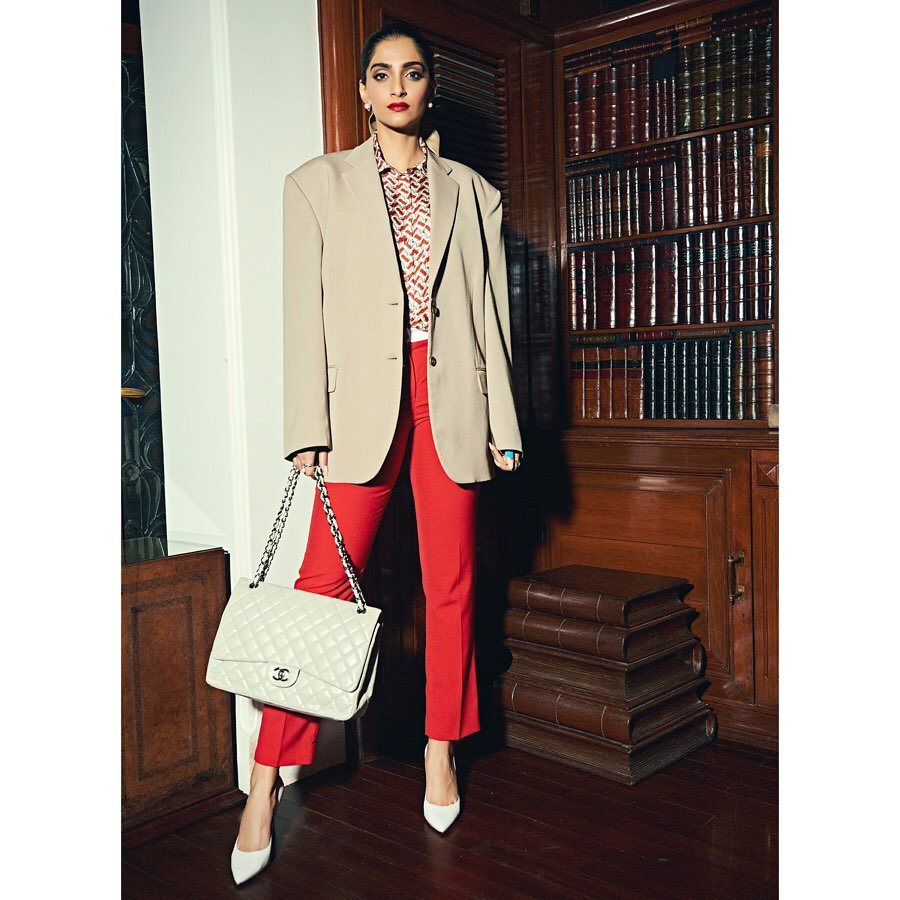 Sonam Kapoor has a thing for sophisticated products, and she loves to flaunt them. The actress owns a neutral-toned classic flap bag from the luxury brand, Chanel,and she is often spotted carrying it with style. Though the classic bag can make anyone fall for it, but its price can easily dig a hole in your pocket. The Chanel flap bag is priced at around Rs. 3,14,000.

Sonam Kapoor owns many pantsuits and makes sure to win our hearts whenever she dons them. Yet another pantsuit in her closet is from the label, Alexander McQueen. The actress had once donned a navy blue and grey patchwork wool jacket from the brand, which she had paired with matching pants. The outfit is worth Rs. 1,66,453, and it is indeed a classic piece.

Sonam Kapoor Ahuja is a fashionista, who aces her look with her expensive fashion labels. We are stunned by the luxurious assets in her evergreen wardrobe. What about you? Let us know.

Next Read: 7 Times When Sonali Bendre Rewore Her Favourite Fashion Pieces And Restyled Her Timeless Wardrobe