Mira Rajput Kapoor Snapped With Newborn Zain Kapoor And Misha Kapoor At The Airport, Pics Inside

Mira Rajput Kapoor Snapped With Newborn Zain Kapoor And Misha Kapoor At The Airport, Pics Inside 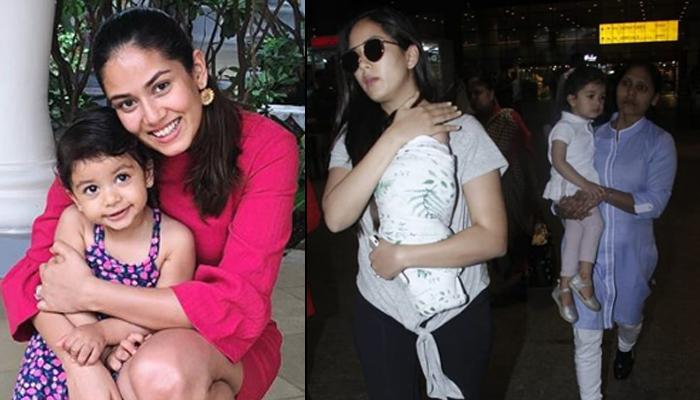 We are so much in love with Shahid Kapoor that we lovingly welcomed his non-industry wife, Mira Rajput Kapoor. Then we went awe with the cuteness and charm of their first child, Misha Kapoor. And now, Shahid and Mira welcomed their second child and we can’t wait to get a clear glimpse of this new addition in the Kapoor family. On September 5, 2018, Shahid and Mira embraced parenthood for the second time with the arrival of their baby boy, whom they named Zain Kapoor. (Also Read: Unseen Pictures Of Mira Rajput Having A Gala Time With The 'Girl Squad' At Her Wedding With Shahid)

Although we got a glimpse of Zain nestled in his mom’s arms, when Mira got discharged from the hospital, we are still waiting to get a clear picture of one-and-a-half-month old, Zain. But till then, here’s another glimpse of little Zain Kapoor travelling along with his mother, Mira Rajput Kapoor and sister, Misha Kapoor. The trio was snapped at the airport on October 23, 2018. Take a look at the pictures:

Announcing the name of the junior Kapoor, Shahid tweeted, “Zain Kapoor is here and we feel complete. Thank you for all the wishes and blessings. We are overjoyed and so grateful. Love to all.” In Arabic, the name Zain means grace and beauty.

How do you like the name of Mira and Shahid’s son? Are you wondering who kept his name, is it, Mira or Shahid? In an interview recently, Shahid answered this question and revealed, "We kind of decided both the names together when we were having our first baby. So, when the boy happened to be, we stuck to Zain."

Shahid Kapoor’s mother, Neelima Azeem revealed that Shahid and Mira zeroed in Zain’s name at the time of Mira’s birth only. She had stated, "Mira and Shahid decided it mutually. At the time of Misha's birth, Zain was decided. It was that it will be Misha if it is a girl (combination of Mira and Sasha) and if it is a boy, it will be Zain. Long back I had shared the name with Shahid. I had told Shahid that I love 4 names- Shahid, Ishaan, Zain and Kaamraan." (Also Read: Shahid Kapoor And Mira Rajput Kapoor Spotted On A Dinner Date For The First Time After Zain Kapoor)

Neelima ji also revealed Misha’s reaction to her little sibling, and shared, "It is definitely a sweet and exciting part in her life. Now, she has got a brother and a companion. Misha is basically a very soft and tender child. She is full of energy and fun, there is a lot of sweetness in her. Even when she goes to the beach, she will play with the puppies and babies there.. she is like that with everyone and now it is her own brother. But, of course, it is a little emotional adjustment for all the children so that will happen. But I think her parents are handling that very beautifully. They are balancing the act nicely. All the credit goes to Mira and Shahid."

Speaking about his newborn nephew, Zain and how he has changed the family, chachu Ishaan Khatter said, “He truly is a miracle of life, and we don't realise it until it happens to someone so close to you. This is the second time that I have become an uncle… that feeling of wonderment doesn't change. I am extremely grateful and 'Masha Allah' I am very happy for my brother, his family is complete. I'm very excited to be a part of his growing up. Misha is a darling, and she's doing fine now.”

A few days before delivering Zain, Mira in an interview stated that this time it would be an altogether a different experience as she already has a toddler, Misha at home and now they have to balance between her and the newborn. Saying that Misha shouldn’t feel neglected, Mira elaborated, “This time I already have a toddler around and keeping a balance between the one you have and the one that's on its way is very important. Everything changes and you don't want that the one who has been the apple of your eyes for so long and feels that she's the center of your world to feel neglected and ignored. That is very important.”

Recently, Mira’s Instagram story depicted a strong message wherein she asked her followers to not send any gifts for Zain. Her Insta story could be read as, “Thank you to all those who have sent beautiful gifts for Zain. We are so fortunate and extremely grateful for all we have, but there are families and babies who are much more in need. Please send your products/gifts to those in need instead and make another baby’s world a happier place.” (Also Read: Shahid Kapoor And Mira Rajput Kapoor Bought Their Rs 56 Crores Worth New Dream House In Worli)

How many of you are eagerly waiting to see the first ever family picture of the awesome-foursome Kapoor clan? Drop us a comment below.