From their mushy lovey-dovey pics to their ‘oh-so-adorable’ family captures, Shahid Kapoor and Mira Rajput Kapoor became an ideal couple of B-town ever since their wedding in 2015. Everything is going swimmingly well in this much-in-love couple’s life and Shahid is on cloud nine these days, personally as well as professionally. With several interesting projects in his kitty, Shahid is also super-excited to become a dad for the second time. (Also Read: Virat And Anushka's Luxurious Sea-Facing Home In Mumbai Is Every Couple's Dreamy Love Paradise)

Shahid Kapoor and Mira Rajput Kapoor have been on house hunting for the last six months, after the alarming increase in prostitution in their neighbourhood. Shahid and Mira are currently living at the Praneta building, Juhu Tara Road, a sea-facing abode befitting their status. Now, as per a DNA report, Shahid and Mira bought a duplex in upscale Worli, Mumbai for Rs 55.60 crore. The Batti Gul Meter Chalu actor had paid Rs 2.91 crore as a stamp duty to the government, for its registration. Shahid and Mira’s new abode is located on the 42nd and 43rd floors of Tower B of Three Sixty West. And the portions of their two floors measure 427.98 square meter and 300.48 square meter, including a balcony spanning 40.88 square meter. Therefore, the total area of their new ‘home sweet home’ adding up to 801.30 square meter, or 8,625 square feet. Along with the flat, the Kapoors will also get six parking spots in the building. (Also Checkout: Akshay And Twinkle's Luxurious Seaside Home Overlooks Arabian Sea And Even Has Pond In Living Room) Shahid registered the property on July 12 in the name of Shahid Pankaj Kapoor and Mira Shahid Kapoor, after the deal got finalised on June 27. But it is still unknown as to when the couple will shift into their new abode. Shahid and Mira’s luxurious pad is also the enclave of choice for many other Bollywood celebrities, including Akshay Kumar-Twinkle Khanna and Abhishek Bachchan-Aishwarya Rai Bachchan. (Also Read: Inside Aishwarya Rai And Abhishek Bachchan New Rs. 21 Crore Apartment In Mumbai, See Pics) While Akshay paid Rs 27.94 crore to buy the property in August 2015, Abhishek paid Rs 41.14 crore to buy his flat in November 2014. Even industrialist Niraj Bajaj had paid Rs 120 crore for a flat on the 50th floor of Three Sixty West, in March 2018. The towers of their palatial home are designed in such a way that each home gets the sea view and enjoys privacy. 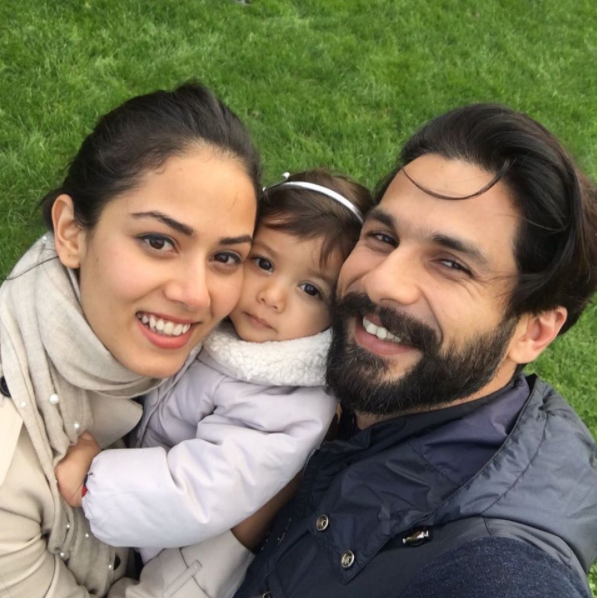 Shahid and Mira are proud parents to their little munchkin, Misha Kapoor and are soon expecting their second child. Shamira, as fans fondly call the couple, treat their fans with drool-worthy pictures of their little toddler, Misha to make our hearts flutter with ‘awe’. On July 22, 2018, Mira treated her fans with, not one but two ‘full of swag’ pictures of Misha. While in one snap, Misha is killing her OOTD by sporting it with a stylish pair of sunglasses and posing like a total boss. Mommy Mira captioned the picture as, "When missy picks out her outfit #ootd". (Also Read: Sonam Kapoor Ahuja Will Move To Her 35-Crore House With Anand S Ahuja By The End Of 2018) Another picture was shared by Mira as her Instagram story, where Misha is seen walking with her ‘swag level on point’. Mira captioned the image, "Earlier today... too much swag" As per the reports, Shahid is wrapping up his work commitments to take a month-long paternity break after his wife, Mira's delivery to spend some time with his newborn kid, Mira and Misha. 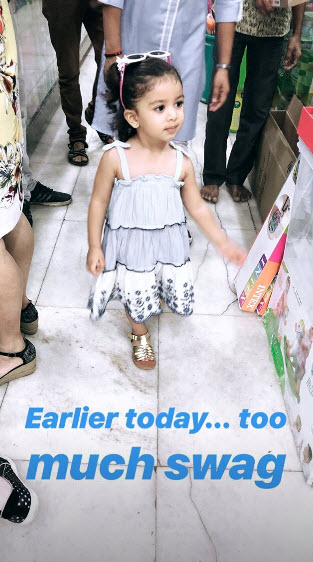