Virat Kohli Has The Bestest Wish For His Wifey, Anushka Sharma's B'day, And She Reacts Cheesily

Virat Kohli Has The Bestest Wish For His Wifey, Anushka Sharma's B'day, And She Reacts Cheesily

Anushka Sharma turned a year older and her husband, Virat Kohli posted glimpses from her birthday party with a cutesy wish. However, it was her reply that caught our attention. Check out!

The power couple of Tinseltown, Anushka Sharma and Virat Kohli never fail to set pure couple goals with their mushy romance and cute PDAs. The much-in-love duo had tied the knot on December 11, 2017. Later, in 2021, they had embraced parenthood for the first time with the arrival of their angel, Vamika, into their lives. And now, on Anushka's 34th birthday, once again, Virat has won our hearts by penning down the cutest wish for his wifey.

The doting parents, Anushka Sharma and Virat Kohli keep their fans updated by sharing drool-worthy pictures of themselves on their respective IG handles. On January 11, 2022, their daughter, Vamika Sharma Kohli had turned one, and the doting parents had celebrated her birthday party in a bio-bubble. The loving mommy had shared glimpses from Vamika's first birthday celebration on her IG handle and had penned a lovely note which could be read as:

"The sun was bright, the light beautiful, the table full, and just like that our little girl turned ONE! The evening was made extra special with the warmest people. And here I was worried about her first birthday being in a bubble! Thank you guys !! (you know who you are)."

Also Read: Kareena Kapoor Khan Shares A Picture With Her 'Nanad', Saba, On Her B'day, Its Every 'Bhabhi' Ever 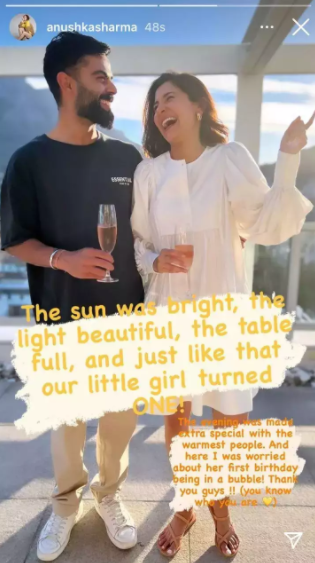 On May 1, 2022, Anushka Sharma turned a year older and heaps of praises and wishes poured from all sides. And her hubby, Virat Kohli was also not left behind. A few moments back, he took to his IG handle and shared adorable glimpses with her to wish her. The pictures were from Anushka's 34th birthday bash. In one of the glimpses, Anushka and Virat were seen happily posing, and the happiness on their faces was unmissable. Alongside the pictures, Virat wrote:

"Thank god you were born. I don’t know what I would do without you. You’re truly beautiful inside out. Had a great afternoon with the sweetest folks around @anushkasharma." 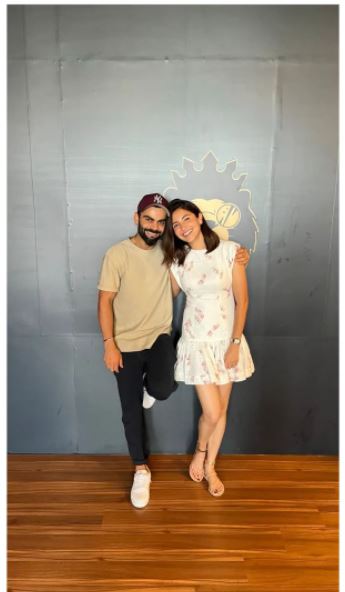 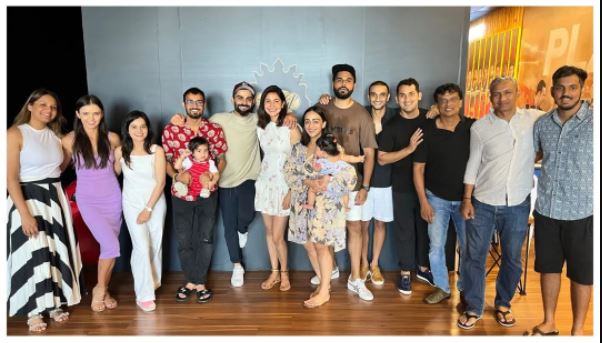 As soon as Virat posted the pictures, many of the duo's fans and friends from the B-town flooded the comment section with heaps of love. However, the birthday girl took to the comment section and dropped a cheesy reply on her hubby's wish that caught our attention. Anushka wrote:

"Stole my words and my heart ( CHEEESSSSYYYYY)" 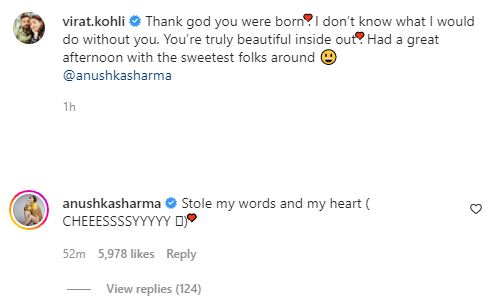 Anushka too took to her IG handle and shared mesmerising glimpses from her birthday bash. In the pictures, she was seen having a bite of a beautiful cake reportedly given by her hubby, Virat as atop it, the caption read as "Happy Birthday, my love." In the pictures, Anushka was wearing a floral printed midi dress which features a peplum effect at the waist portion. She teamed her look with a side-parted open hairdo and no makeup. Alongside the pictures, she wrote a lengthy note which can be read as:

"I feel happier, more loving, more understanding, taking myself less seriously, listening more, finding joy in less, able to let-go better, more accepting of myself and others AND situations, feeling more beautiful, expressing feelings more easily, valuing my own opinion above others ….. This getting older business is going GREAT! Everyone should try it. Thank you for all the wishes and love you’ve sent my way. I’m SO grateful. PS- I ate the biggest slice of my birthday cake. As it should be." 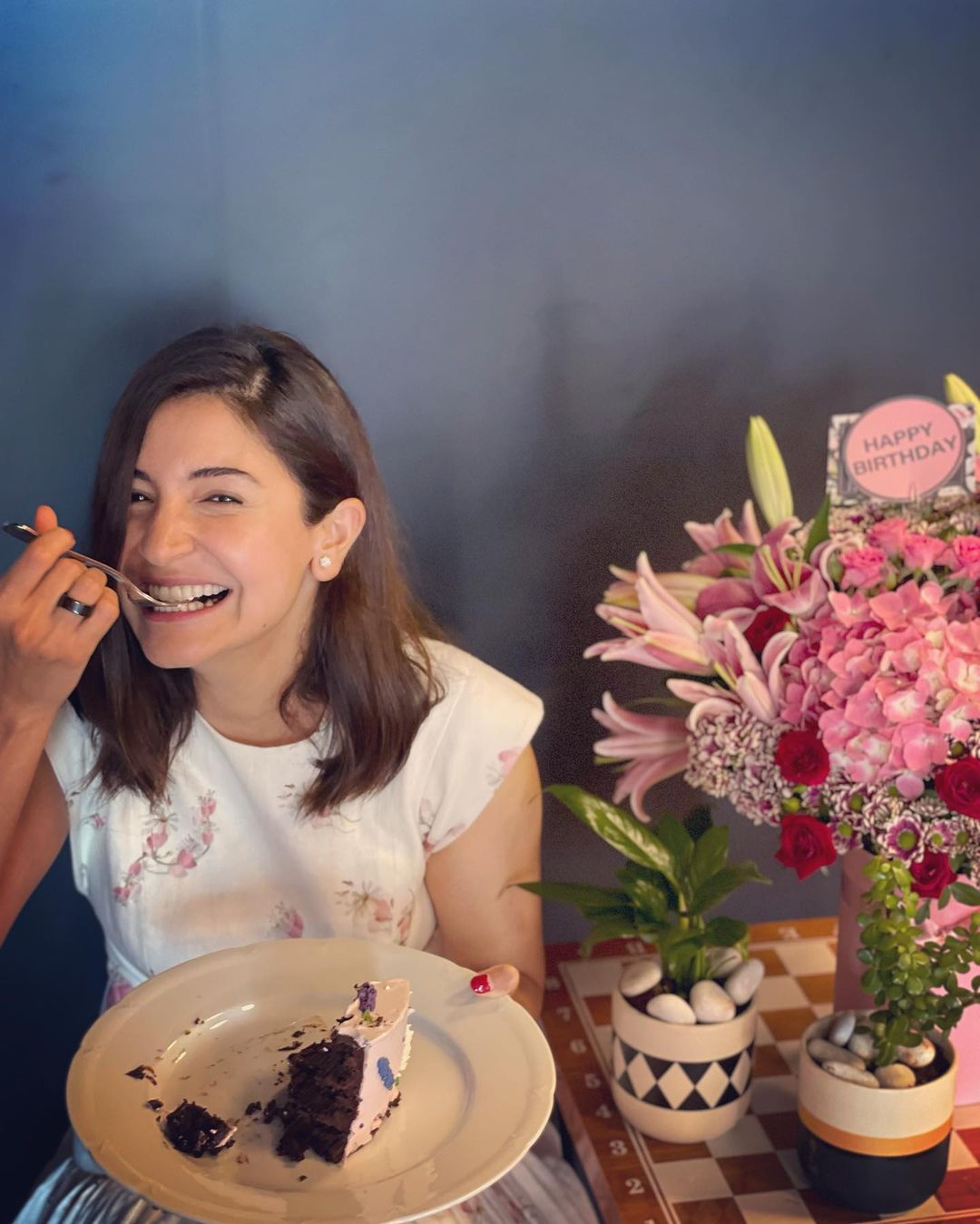 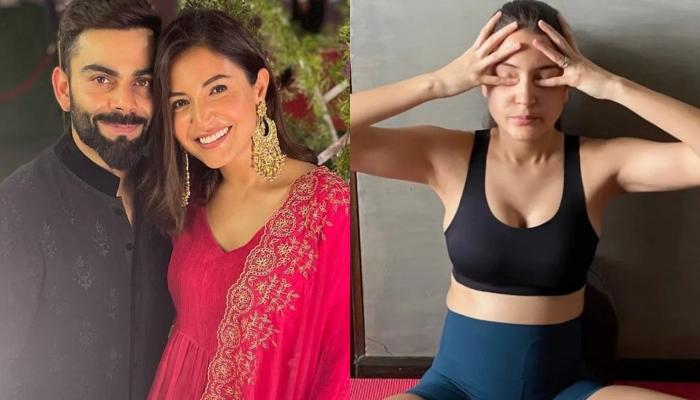 Bollywood actress, Anushka Sharma believes in simple living and high thinking. Over the years, we have seen the actress prove her acting mettle with her films. While Anushka is an amazing actress, she is a loving wife to the cricketer, Virat Kohli and a doting mommy to their  baby girl, Vamika. The