As Abhishek Bachchan and Aishwarya Rai Bachchan completed 13 years of marital bliss on April 20, 2020, we have a special treat for their fans. Find out!

It’s been close to one-and-a-half-decade since they had fallen for one another, thirteen years since they have tied the knot and eight years since they became parents. This is the day when they were pronounced to be each other’s forever in front of the world, the day they both became husband and wife, and this day must be celebrated to its fullest! And it was this day, 13 years ago, when the former Miss World had walked down the aisle with the most eligible bachelor of B-town, who has proved at every step that he is more than just a star kid, Abhishek Bachchan. (Also Read: Abhishek Bachchan And Aishwarya Rai Bachchan's Combined Net Worth, She Owns A Ring Worth 70 Lakh)

It was on April 20, 2007, when Aishwarya Rai had added Bachchan to her name as she had exchanged wedding vows with Abhishek Bachchan. There are no second thoughts that love-nest is a paradise, but there are only a few lovebirds, who teach us the meaning of true love and reinstate our faith in marriage. Needless to say, Aishwarya and Abhishek belong to that category and are acing it with their gracious self. Over more than 13 years, Abhishek and Aishwarya have not just shelled out #CoupleGoals but have also epitomised the value of love and family. As Abhishek Bachchan and Aishwarya Rai Bachchan completed 13 years of marital bliss on April 20, 2020, we have a special treat for their fans. Since we have seen a lot of pictures from Abhishek and Aishwarya’s wedding, let us show the inside video from their marriage rituals. To mark Aishwarya and Abhishek’s 13th marriage anniversary, take a look at their wedding video as they had embarked on their journey of ‘happily ever after’. From Shweta Bachchan Nanda performing the rituals to the varmala, here’s a sneak peek into Abhishek and Aishwarya’s wedding:

To mark 33 years of AJSK, the famous designer duo, Abu Jani and Sandeep Khosla had treated their fans with some priceless gems from the Bachchan clan’s family album and we couldn’t be more thankful to them! Sharing some never-seen-before pictures from Abhishek Bachchan and Aishwarya Rai’s sangeet, the designer duo had written, “2007: A wedding beyond a fairy-tale! We are immensely thankful to Abhishek and Aishwarya for sharing these never before seen images from their Sangeet. Abu Sandeep not only designed the clothes, but they added their creative charm to the decor as well. The three months of joyous preparation for this event was a highly emotional and creatively satisfying time for the duo. It was a truly precious, personal and pleasant experience.” (Also Read: Shweta Bachchan Made A Statement In White On Wedding Ceremonies, Resemblance With Navya Is Uncanny) Elaborating on Aishwarya Rai and Abhishek Bachchan’s sangeet ensembles, they had written, “In the picture above, Abhishek is matchlessly dapper in a blue silver brocade short Sherwani adorned with gota resham, stones and pearls, while Aishwarya exudes pure radiance in an embroidered pastel resham ghagra set that shone with sequins and stones along with a dupatta that was just as rich in details. Abhishek looks princely as ever and Aishwarya remains reminiscent of a goddess in all her bridal glory. The wedding was an epitome of glamour and grace and the memory of it remains fresh in our hearts. @bachchan @aishwaryaraibachchan_arb @amitabhbachchan #33YearsOfAJSK.” 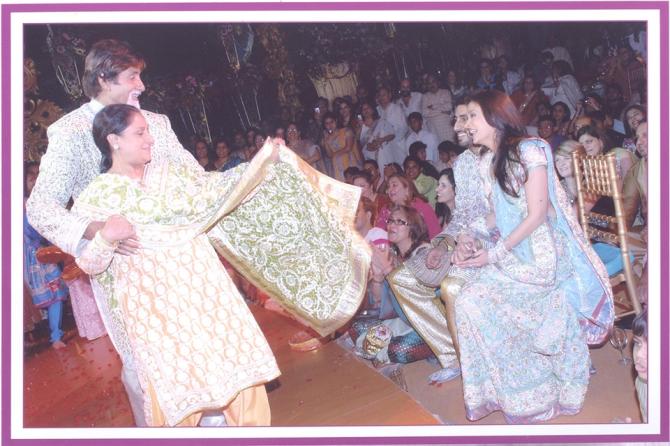 Revealing the details of Abhishek Bachchan’s royalty personified wedding sherwani, that still makes us swoon over it even after all this time, the designer duo had captioned his wedding pictures as “2007: A groom so dapper, we continue to swoon even after all this time! Abhishek Bachchan was royalty personified on the day of his wedding with Aishwarya Rai. His Sherwani was a work of art realized in a fabulous geometric Vasli pattern. The inner kurta had self-tailoring and gota details with intricately embroidered Zardozi borders. His jooties too, featured indulgent embroidery and his safa was made of Jamdhani tissue that had dreamy gota details. Mothers often come to Abu Sandeep with a picture of this ensemble, wanting their sons to wear an identical Sherwani for their big day. @bachchan @aishwaryaraibachchan_arb #33YearsOfAJSK.” 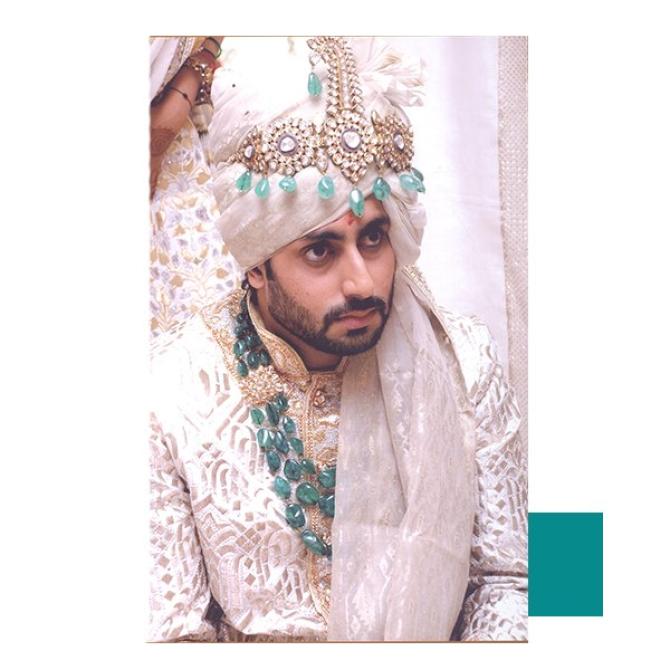 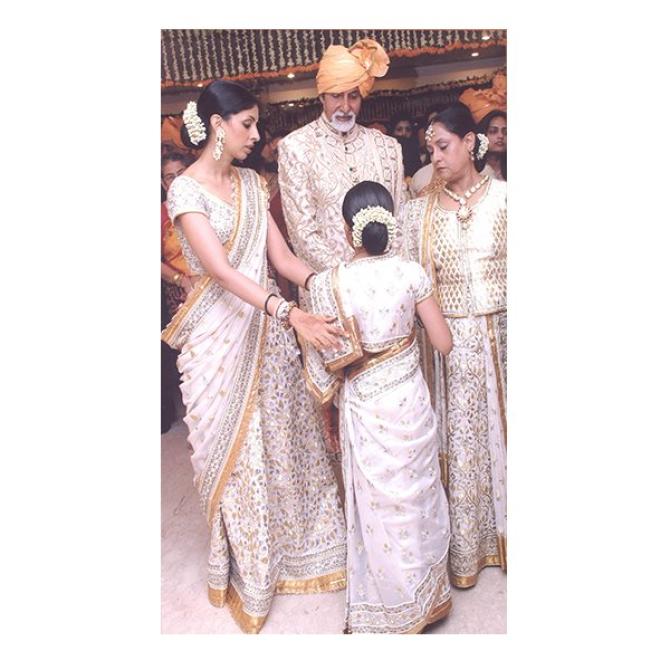 Congratulations Abhishek and Aishwarya on completing 13 years of married life!